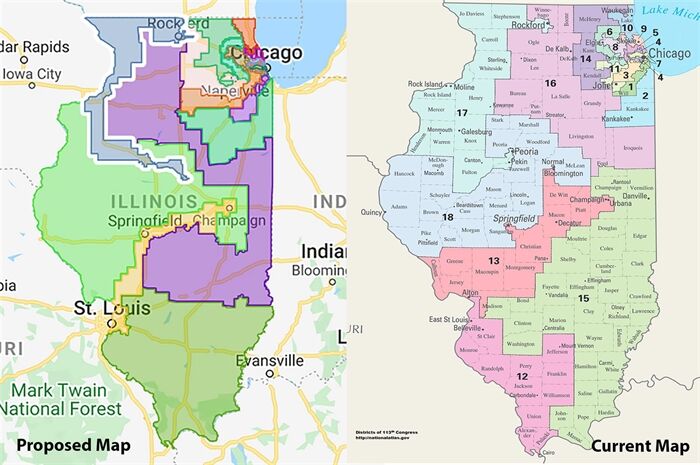 A screenshot of the proposed new congressional maps for Illinois is pictured, left, next to the current map. Several changes have been made as Illinois lost one district due to population decline. In the proposed map, the purple district includes Effingham County and would be represented by U.S. Rep. Rodney Davis. 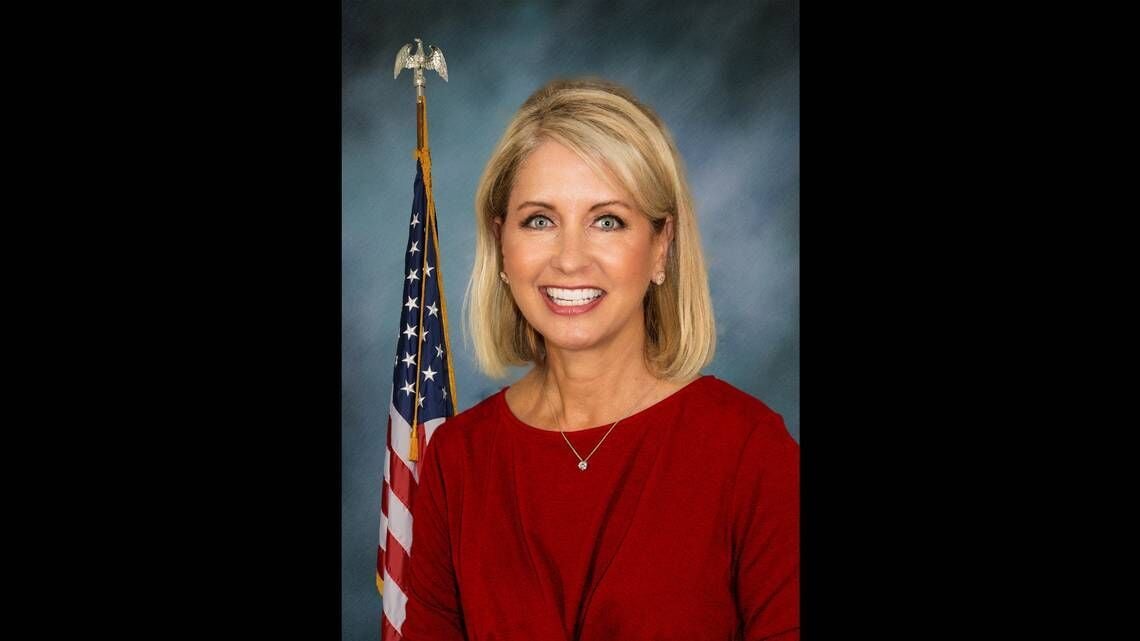 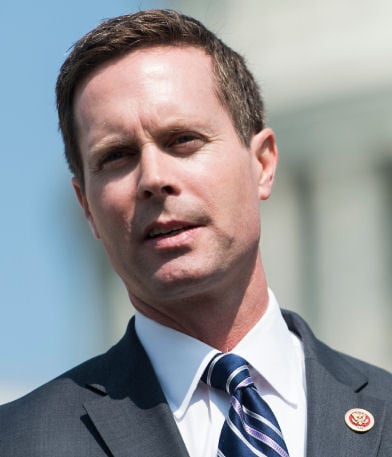 SPRINGFIELD – Democrats in the Illinois General Assembly released a proposed set of new congressional district maps Friday, just days before lawmakers return to the Statehouse for the start of their fall veto session, which begins Oct. 19. U.S. Rep. Mary Miller would no longer represent Effingham County under the new map.

The draft proposal includes a number of oddly-shaped districts, many of which would create entirely new constituencies for incumbent members of Congress, particularly Republicans.

Miller, R-Oakland, who represents what is currently called the 15th District in southern and east-central Illinois, would be placed in an entirely new 16th District that takes in Oakland, curls around the city of Champaign and stretches west across much of central Illinois to an area just south of the Quad Cities. That district does not inlcude Effingham County.

Rep. Rodney Davis, R-Taylorville, who represents what is currently the 13th District in central Illinois that includes Champaign, Decatur and a portion of Springfield, would be placed in a new 15th District that begins in Litchfield and stretches east to the Indiana border, then snakes northward to take in Danville, then back west and north to include Pontiac, Sterling, Dixon and Freeport in northern Illinois. That district would include Effingham County.

Davis has previously indicated he might consider running for governor in 2022, depending on how his district is redrawn.

In a statement Friday, Davis did not indicate that he’d made a decision, but he harshly criticized the proposed new maps.

“As expected, our lying governor teamed up with state Democrats to draw a shameful, partisan gerrymander in a desperate attempt to keep (U.S. House Speaker) Nancy Pelosi in power,” he said. “This proposed map, along with this entire redistricting process, is a complete joke.”

State Sen. Darren Bailey, R-Louisville, who is seeking the Republican nomination for governor, called the map “hyper-partisan and gerrymandered.”

“These corrupt, politically-motivated maps were drawn to benefit politicians over working families, and Illinoisans deserve better,” Bailey said in a press release. “People are tired of being lied to and they are tired of the political elites putting their elections over working families and the success of this state. We need to use real data and we need to draw fair and independent maps. Voters should pick their elected officials and not the other way around. I hope and pray Springfield will come together and do what’s right for the people of Illinois and give them fair and honest maps through a fully transparent process. Until then, I will stand up, speak out, and vote no on any map that puts politics ahead of the people of this state.”

Southern Illinois, which saw the most dramatic population declines, would essentially be compressed from having two districts to just one. Rep. Mike Bost, R-Murphysboro, would see his 12th District nearly double in size geographically to take in almost the entire southern end of the state, from an area just east of the Metro East region all the way to the Ohio River.

The Quad Cities is currently in the 17th District that also includes Rockford. It is represented by Rep. Cheri Bustos, D-Moline, who has announced she will not seek reelection in 2022. That area would become part of a new 17th District that takes in Rockford, stretches west to the Mississippi River, then snakes south to Galesburg and back east to take in Bloomington and Peoria, the hometown of Republican Rep. Darin LaHood, who represents what is now the 18th District.

Adam Kinzinger, a Republican from Channahon, southwest of Joliet, would also be moved into a much different district. He represents what is currently the 16th District west of the Chicago metropolitan area. He would be placed in a new 3rd District that stretches from Oak Lawn south and west to LaSalle.

Illinois could play a pivotal role in the 2022 congressional elections as Democrats try to hold onto their slim majority. The U.S. House is split 220-212 in favor of Democrats with three seats currently vacant – two last held by Democrats and one last held by a Republican.

Historically, however, the party that occupies the White House loses congressional seats in a new president’s first midterm election, a pattern that does not bode well for Democrats.

In Illinois, however, Democrats currently hold a 13-5 majority in the state’s congressional delegation, and Democrats are firmly in control of the redistricting process in the state General Assembly, so it is likely they will do all they can to keep as many Democratic seats as possible.

“Call this new Illinois map the Nancy Pelosi Protection Plan,” Illinois Republican Party Chairman Don Tracy said in a statement. “It’s appalling that fair representation, keeping communities of interest together, and transparency in the mapmaking process in Illinois all had to take a back seat to the demands of national politics.”

The proposed new maps were released after the Illinois House and Senate held a series of public hearings around the state that drew surprisingly little public participation. In fact, several hearings drew no public input at all while others saw only one or two witnesses speak.

Many of the nonpartisan advocacy groups that were active during the legislative redistricting process earlier this year took no part in the congressional redistricting process, and some of them cited their frustration with the earlier process as a reason for staying away.

“I’m not surprised to see so few people at the recent redistricting hearings, given the exclusionary Illinois state redistricting process that occurred this year, which resulted in a map that harms communities of color,” Ami Gandhi, senior counsel for the Chicago Lawyers Committee for Civil Rights, said in an email. “Even the community members who have made the effort to analyze and speak out on the maps – especially people of color – have said they don’t feel heard and that their input hasn’t mattered. That’s a shame because these maps will absolutely affect our communities’ options, resources, and rights for the next ten years.”

Jay Young, executive director of Common Cause Illinois, said in an interview that there was a general feeling of frustration among many advocacy groups that took part in the legislative redistricting process that has carried over into congressional redistricting.

“I don’t know if ‘jaded’ is the right word,” he said. “I mean, there’s some folks who are just flat out angry. You know, I have friends that I used to work with in their previous life, who are now part of the General Assembly. I believe that they’re still my friends. I know that they care. But even the people that I had better hopes for I don’t think did what I had hoped for.”

Democrats said at the time that the new legislative maps were designed to reflect the racial and ethnic diversity of the state. But those maps are now the subject of two ongoing federal lawsuits, including one by a leading Latino advocacy group, the Mexican American Legal Defense and Educational Fund, or MALDEF.

In addition, a group of Black leaders from Chicago called Illinois African Americans for Equitable Redistricting recently asked the Justice Department to conduct a civil rights investigation into the policies and practices that led to the maps, which they argue dilutes Black voting power.

The proposed new maps that were released Friday might be only the first draft of a redistricting plan. The House Redistricting Committee held one hearing Friday after the proposal was released, and it drew more public participation than most of the previous hearings. It will hold another at 9 a.m. Wednesday in Springfield.

The Senate Redistricting Committee canceled its Friday meeting and scheduled another for 2 p.m. Wednesday at the Statehouse.

The map can be viewed by clicking here.

Capitol News Illinois is a nonprofit, nonpartisan news service covering state government and distributed to more than 400 newspapers statewide. It is funded primarily by the Illinois Press Foundation and the Robert R. McCormick Foundation.