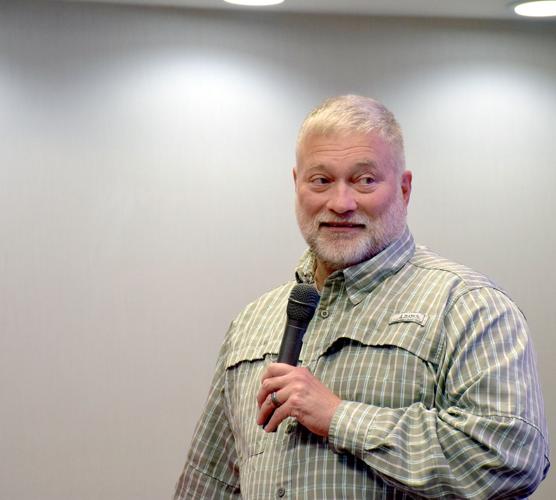 Longtime educator and historian Mark Alan Motsinger speaks to convention attendees about Illinois’ education system, claiming the state spends too much on its public schools. 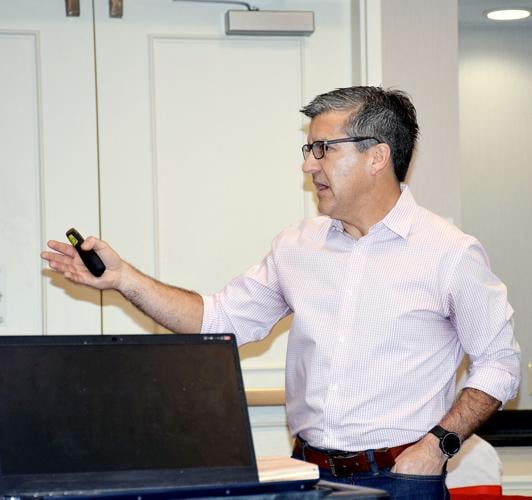 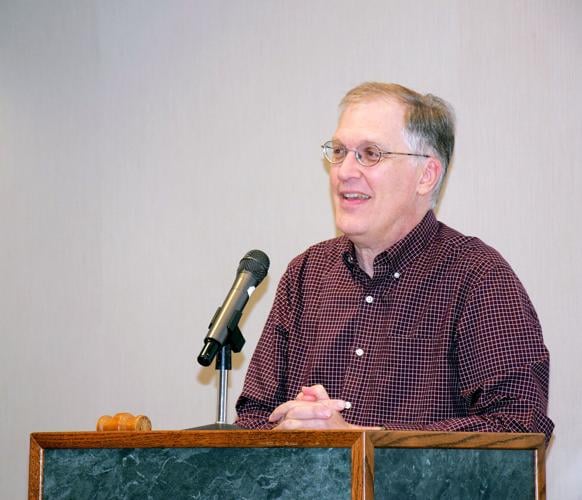 New Illinois Vice Chairman Larry Mulch discusses potential borders for the new state that would exclude much of the Chicago area.

Longtime educator and historian Mark Alan Motsinger speaks to convention attendees about Illinois’ education system, claiming the state spends too much on its public schools.

New Illinois Vice Chairman Larry Mulch discusses potential borders for the new state that would exclude much of the Chicago area.

EFFINGHAM — Following the recent midterm election, some Illinoisans still feel as though the state is neglecting their interests.

The nonprofit Illinois organization, New Illinois, held its second constitution convention this weekend at the Thelma Keller Convention Center in Effingham. The organization has expressed its intention to break away from Chicago and some of its surrounding areas and establish a new state called New Illinois.

One of the convention’s main speakers was Ted Dabrowski, who is president of Wirepoints Incorporated, a nonprofit that independently researches Illinois’ economy and links it to certain political policies.

Throughout his speech, Dabrowski shared several of the organization’s statistics, most of which centered on educational funding and other educational statistics of public schools.

“We’re spending tremendous amounts, and it’s not working at all. But even more important, they’re covering it up,” Dabrowski said.

“They’re being graduated but they can’t read,” Dabrowski said.

Dabrowski attributes those statistics to what he calls the educational industrial complex, which describes an education system that he says fails to educate students while giving teachers and schools high proficiency scores.

“We’re always going to have some kind of public school system. It’s hard for me to imagine a total dismantling of that,” Dabrowski said.

Instead of calling for an end to public schools, Dabrowski suggests a focus on school choice.

Also speaking at this weekend’s convention was longtime teacher and historian Mark Alan Motsinger, who also serves as president of the Saline County Historical Society. He is on the advisory board of the Illinois State Historical Society.

Motsinger said many students are lacking unique skills needed in the state’s workforce because there are certain jobs that colleges don’t train students for.

“Every society needs a kid who doesn’t graduate,” he said.

Motsinger argued that Illinois could better educate its population while simultaneously reducing the amount it pays for public school tuition per student.

“The kind of education we get is not always the amount of money we spend,” Motsinger said.

Like many at the convention, Motsinger suggested the public school system is a tool of the government meant to control the hearts and minds of the population.

“If you can keep a population dumb and dependent, you have them under control. You can tell them whatever you want,” he said.

New Illinois Vice Chairman Larry Mulch led the group’s joint session during which he detailed the proposed state constitution. They chose one of Illinois’ old constitutions as the basis of their new document.

“We chose the 1870 constitution as our starting point. We felt that it most closely aligned with what we think New Illinois is going to want,” Mulch said.

Mulch said the group already meets regularly to discuss potential changes to the document, and a couple have already been made.

Also during the joint session, Mulch shared a map of Illinois with New Illinois’ proposed borders, which essentially excludes Chicago and other parts of the area from the rest of the state. The proposed borderline would also give New Illinois access to Lake Michigan, which Mulch said will help the new state’s economy.

Although the map is still subject to change, Mulch said they shouldn’t waste too much time figuring out the important details.

“We don’t want perfection to become an enemy of the good,” he said. “You’ve got to start with something.”

Mulch said he hopes counties and townships within the proposed border for New Illinois will decide to join the new state and break away from Chicago. He said they would need the support of the communities, similar to what happened when West Virginia was formed as it broke from Virginia in the early 1860s.

Much of New Illinois’ current constitution is meant to limit and put checks on the power of the state’s legislature.

“To a large extent, we have to trust the new legislature, but we also know from experience that, all the time, they go bad,” Mulch said.

Mulch went through New Illinois’ working draft of its state constitution and bill of rights. The constitution is very similar to that of many states in the U.S., but the group has already added a couple of articles to the document.

A section of the constitution reflects the group’s desire to promote school choice in their state rather than the public school system.

“What it basically means is the parents have the right to direct the upbringing, health, education and care of their children,” Mulch said.

Nick Taylor can be reached at nick.taylor@effinghamdailynews.com or by phone at 618-510-9226.