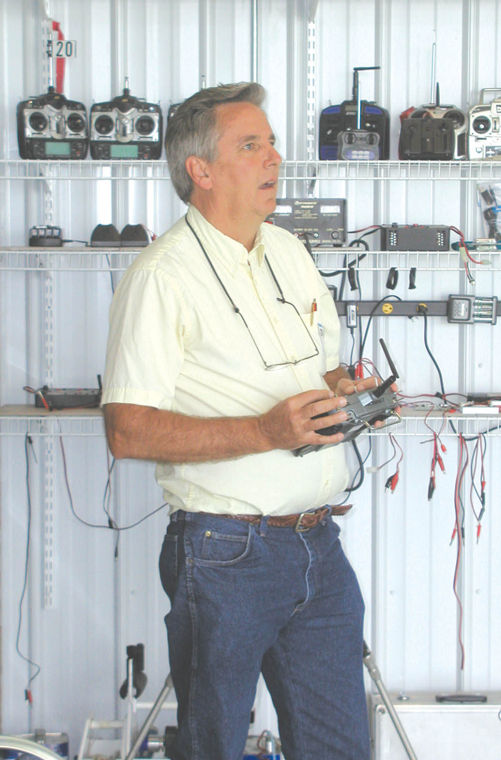 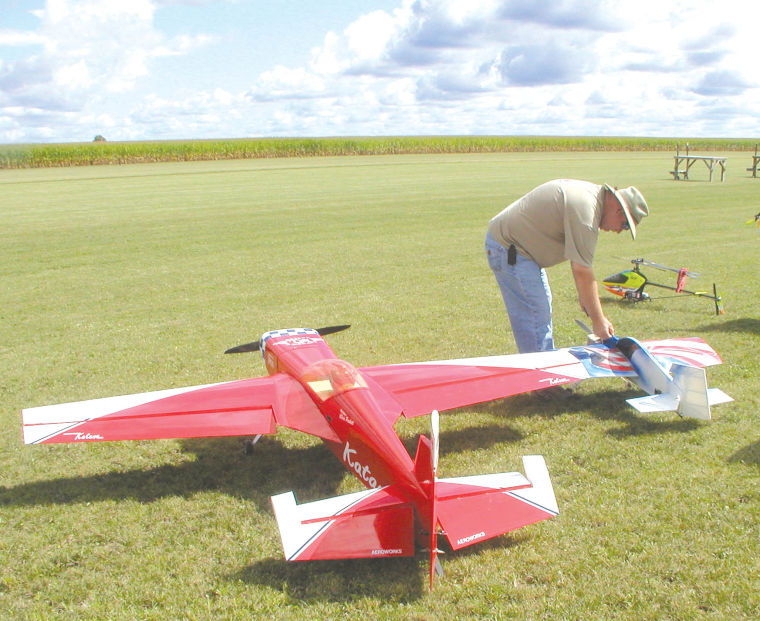 Todd Stark checks the voltage on his remote controlled plane at the first annual Dust Fly near Shumway. The plane shown here runs on a 10 horsepower engine and is about as third as big as a full-size stunt plane.

Todd Stark checks the voltage on his remote controlled plane at the first annual Dust Fly near Shumway. The plane shown here runs on a 10 horsepower engine and is about as third as big as a full-size stunt plane.

SHUMWAY — If you had told Mark Burgess five years ago that he would have becomea remote control flying buff, he might have given you a funny look. Then somebody took the Effingham resident to an “RC” flying show. “I got hooked right away,” Burgess said. So hooked, in fact, that he has even started organizing shows. Sunday, Burgess and other members of the Effingham Sports Flyers hosted the first annual Dust Fly at an open field west of Shumway billed as Shumway International Airport. Burgess said RC flying appeals to people who might not be able to afford to fly full-size planes. “These shows bring out a lot of people who show interest in aviation,” he said. “There’s only a few who can do aviation, but anybody can show their enthusiasm for flying through RC flying.” Some people do both. Jack Poff of the Lake Sara area — who owns the land on which Sunday’s fly-in was held — flies full-size and RC planes. “I enjoy all forms of aviation,” Poff said. “I’ve had my pilot’s license since I was 18 and I started flying remote control planes since I was 16 (in 1968).” There was a wide range of planes at Sunday’s show. Todd Stark of Pana — who flies both RC planes and helicopters — said one of his planes cost $4,000. “It’s 36 percent scale of a full-size stunt plane,” Stark said. “I need 300 feet to land it, and a big area without power lines and trees to fly it.” Stark said the motor on his plane is a 100 cc, 10 horsepower engine that is similar to a chainsaw engine. The motor generates about 10,000 RPM. But some flyers prefer their hobby on a smaller scale. Mike Beal of Auburn was flying a helicopter that weighs about an ounce and can be bought at any hobby store for about $120. “It comes ready to fly out of the box,” Beal said. “It’s great for a beginner or where there’s not a lot of space.” Despite its small size, Beal’s helicopter is durable, as shown when a visiting beginner ran it into the wall of the shed in which he was flying. Sunday’s show was as much about socialization as flying. “I love the camaraderie of the people I fly with,” Stark said. “It’s a very good hobby for a whole family. “These are all really nice people,” Burgess added. “It’s the kind of activity you can bring your family to.” Bill Grimes can be reached at 217-347-7151 ext. 132 or bill.grimes@effinghamdailynews.com.