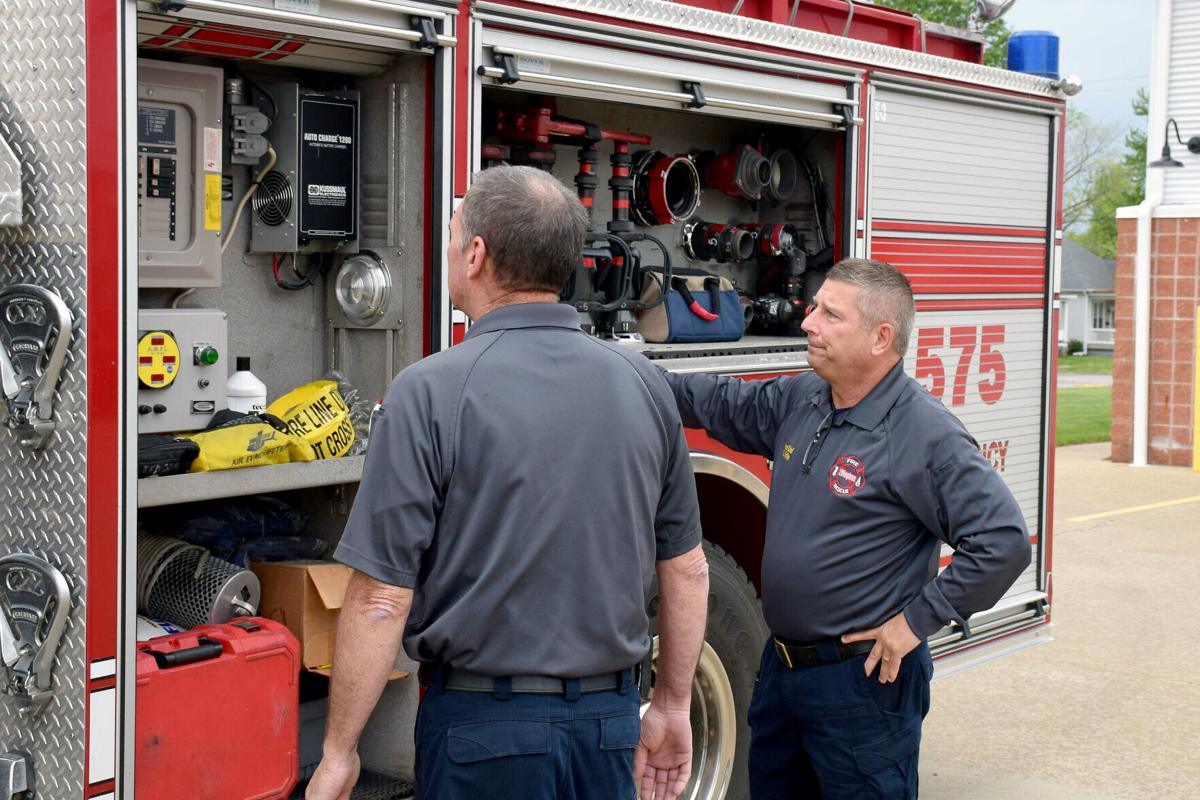 Fire Chief Bob Tutko, right, and Assistant Fire Chief Matt Kulesza point out the systems on the 20-year-old fire truck they are trying to replace. They say the technology on the truck is outdated. 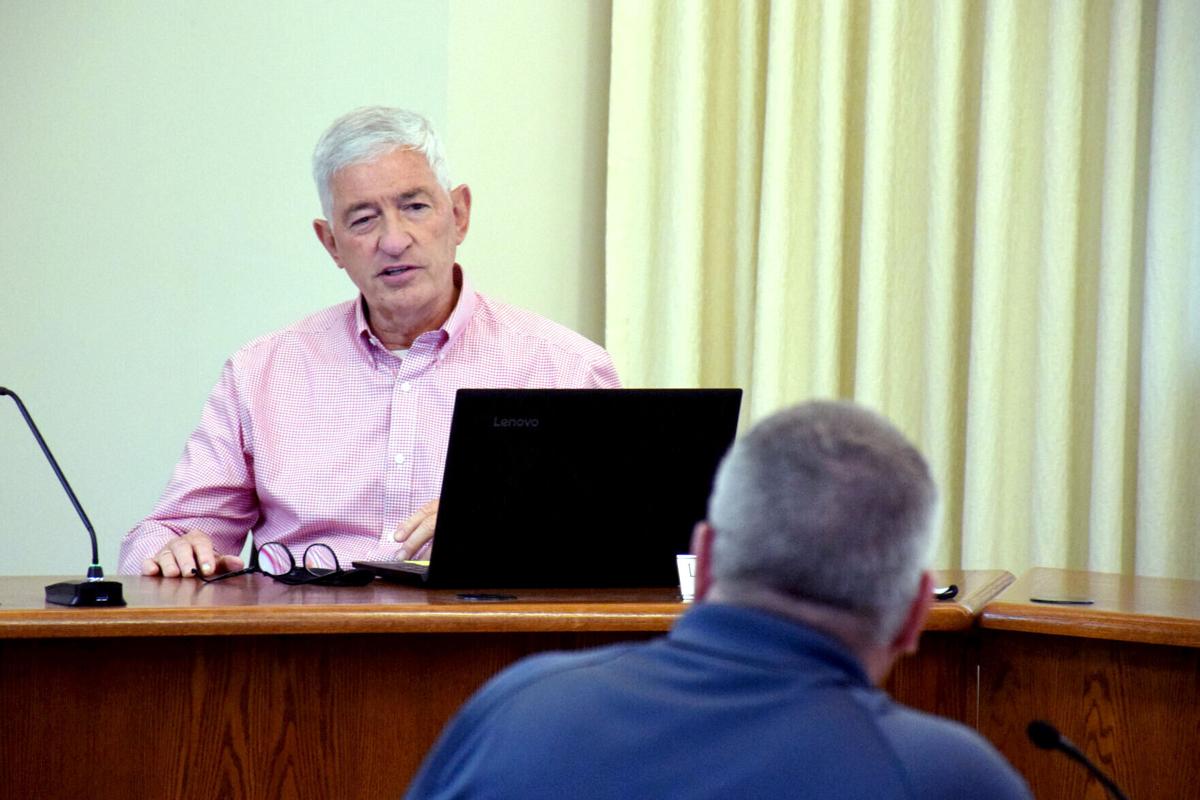 Fire Chief Bob Tutko, right, and Assistant Fire Chief Matt Kulesza point out the systems on the 20-year-old fire truck they are trying to replace. They say the technology on the truck is outdated.

EFFINGHAM — As part of a multiyear process of updating the city’s fleet of fire engines, Fire Chief Bob Tutko proposed leasing a new truck at a recent city council meeting, where he was met with pushback from council members concerned about overspending.

The replacement was planned for 2018, but was initially delayed because former Fire Chief Joe Holomy retired. When the COVID-19 pandemic struck in 2020, the purchase was delayed again.

“It kind of got lost in the transition,” said Tutko.

The engine in question is one of the city’s two pumpers. They are trucks that carry water, pump water from hydrants and carry much of the department’s equipment. The National Fire Protection Association recommends limiting fire engine service to 25 years.

The proposed fire engine will cost about $650,000, spread out over a five-year lease. The engine is sold by fire truck manufacturer E-ONE and was custom designed by a committee of Effingham firefighters.

“We got the end-users, the firefighters, together,” said Tutko.

That is in contrast to past fire engine purchases by the city, according to Tutko. Previously, engine design was controlled almost unilaterally by the fire chief.

Tutko said the new design of the truck will closely mirror the city’s other pumper, meaning that less time will be needed to train firefighters on its use.

“It’s not something you can teach someone in a week,” said Tutko.

The price tag makes some city officials uneasy amid ongoing discussion about the city’s mounting fire and police pension payments.

“I’m not sure where I’m at,” said City Commissioner Hank Stephens. “I have a lot of respect for Bob Tutko.”

Stephens is still worried about the bottom line.

“I’m concerned about the overall cost to the taxpayers of our fire department,” said Stephens. “Almost one fourth of our tax levy was for the fire pension fund.”

Additionally, the fire department’s operational budget is $3.1 million, with just over half going to personnel. This is 15.7% of the city’s general fund budget for this year.

The city is planning to purchase a $1.3 million ladder truck in the next five years as well, a major expense for the department. Tutko and Miller are currently strategizing how to pay for it.

Tutko has proposed several measures to cut the cost of the truck, most of which draw money from people outside the city.

The first is by selling the truck that he’s hoping to replace. Tutko estimates this would bring in between $70,000 and $100,000 to offset the cost.

He has also proposed using funds from the “Outside Fire Protection Fund.” When the fire department responds to situations involving non-residents of the city, they charge those individuals a fee for their services. These fees can range in size, based on how much equipment is used and how many firefighters are needed to respond. Each fire engine used can result in fees of several hundred dollars per hour, for example.

This practice brings in about $30,000 per year, all of which would be used for the truck for the duration of the five-year lease.

“You’re basically going to have out-of-towners that are footing the bill for our fire engine for our community and I think that’s a win for us,” said Tutko.

Finally, the Foreign Fire Insurance Tax will provide some of the funds as well. Per state law, insurance companies based outside of the state have to pay a 2% tax on their Illinois policies. This tax money is distributed to local fire departments around the state and is administered by a board of firefighters in each department.

Effingham’s Foreign Fire Insurance Board has purchased various pieces of equipment and software in the past. That fund was responsible for buying most of the furniture and mattresses for Fire Station 2, which was renovated two years ago.

The board initially committed a $30,000 lump sum to the engine purchase.

This was a sticking point for some of the city’s elected officials, who told Tutko to ask the board to put up more money for the engine.

“We’re giving you the task of going back to these guys and seeing if you can get more foreign fire tax for the term of the lease,” said City Commissioner Larry Micenheimer at the meeting.

This was based on a proposal from City Commissioner Libby Moeller.

“I think what got me was the sum of this being as big as it is,” said Micenheimer. “That’s a lot of money, 30 grand.”

Though not in his original pitch, Tutko believes the Foreign Fire Insurance Board will provide the additional funds.

“I’m confident the firefighters will step up to the plate,” said Tutko in a later interview.

Combined, Tutko estimates these measures will reduce the price tag to the city by about one third of the overall $650,000 price tag.

The firetruck purchase is scheduled for more discussion at the city council’s next meeting, May 18.