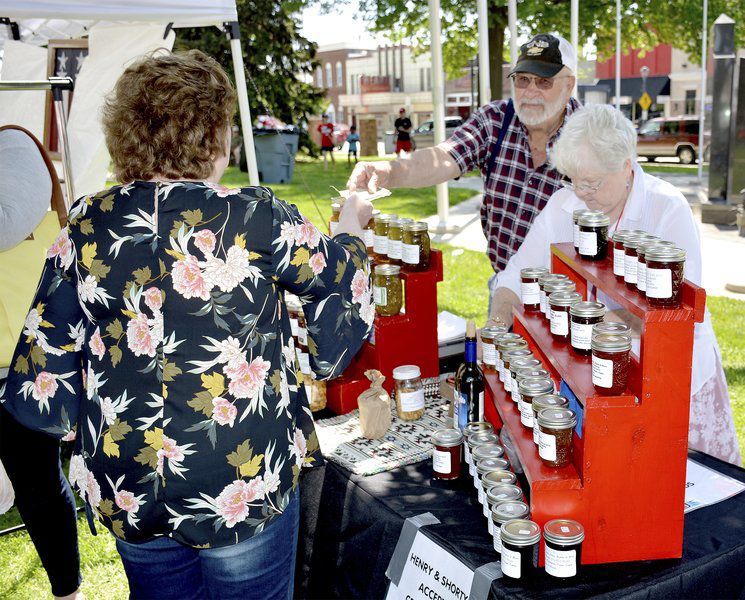 Sandy Lowe of St. Louis, left, makes a purchase from Henry Adkins, center, and Shorty Adkins, right, earlier this year at the Farmers Market on the Effingham County Museum lawn. 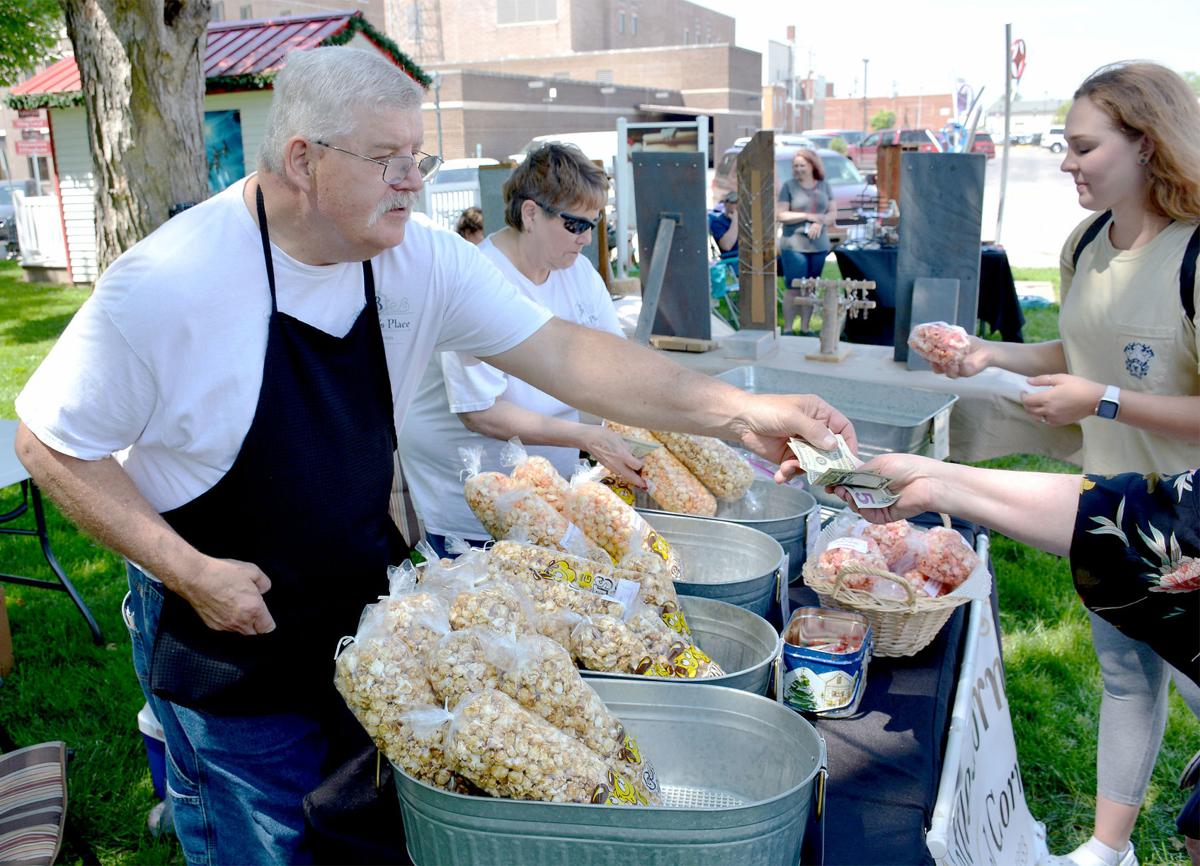 Roger Bushur, left, and Pauletta Bushur, center, stay busy selling a wide variety of popcorn at the Effingham Farmers Market on the Effingham County Museum lawn. Olivia Lowe is pictured to the right.

Sandy Lowe of St. Louis, left, makes a purchase from Henry Adkins, center, and Shorty Adkins, right, earlier this year at the Farmers Market on the Effingham County Museum lawn.

Roger Bushur, left, and Pauletta Bushur, center, stay busy selling a wide variety of popcorn at the Effingham Farmers Market on the Effingham County Museum lawn. Olivia Lowe is pictured to the right.

EFFINGHAM — The Effingham Farmers Market is set to open June 13, and it can’t come soon enough for those who have been itching to get outside and socialize — from a safe distance of course.

Many of the same vendors will be returning, according to Effingham Farmers Market President Dianna Miller. But different this year will be the safety guidelines they and customers will have to follow. Miller said she is still waiting on exactly what those guidelines will be from the Effingham County Health Department.

“Right now the guidelines and restrictions change so frequently they’re not able to give us exactly what they will be on opening day,” she said.

Miller expects those guidelines and restrictions to come in June closer to opening day.

While wearing masks and hand-washing stations will likely be part of guidelines, how to handle money transactions is one of the directives Miller is waiting to receive.

“We’ve talked about only taking exact change or accepting money in bucket or box to minimize touching,” she said.

However, Miller said a lot of the vendors accept card transactions through Square card readers. Paying ahead of time may also be an option, she added.

Miller said social distancing won’t be as much of an issue among vendors as the 10-by-10-foot tents the vendors use already separate them six feet apart.

In addition to changing guidelines, the pandemic has delayed the normal start date of the market this year about three weeks.

Because of the delay, a new feature of the market this year is giving vendors an opportunity to start selling their produce and goods now through the Effingham Farmers Market Facebook page.

“We have vendors with lettuce, radishes, asparagus ready now who wanted to open to customers,” said Miller.

Vendors will post what they have available and customers can post what they are looking for then they can arrange a pickup time and place. Miller said consumers also can email the farmers market at effinghamfarmersmarket@gmail.com if they have something they’re looking for that isn’t posted. Information on the market can also be accessed through Instagram.

Long-time vendor Brenda Roedl said the response to the new feature has been good. The rural Teutopolis resident sells everything from a variety of seasonal produce to jams and jellies to black walnuts and pecans.

But people are still anxious for the market to open, as evidenced in the responses on Facebook when the market announced its opening date, Roedl said.

Roedl isn’t surprised. The market draws between 500 and 700 people every Saturday, she said.

Customers aren’t the only ones anxious for the market to open.

“I think all the vendors are excited and getting ready,” she said.

Miller believes the market will be able to offer consumers an alternative as they see rising prices and shortages of some foods at the stores due to the pandemic.

“I think we can bring something to them that’s more competitive, that includes fresh out of the garden,” she said.

“Above all, I’m just excited to get back in the groove and see our customers,” said Miller.

The retired Dieterich resident, along with her husband, has been selling their fruit pies and other homemade goods at the market for the past six years. Even though the market is still weeks away, the McCartys are keeping busy making from scratch up to 40 pies a week and selling them. But it’s the social interaction they miss.

“We look so forward to the market starting because we miss the people,” she said.

Wanda McCarty said the couple has already implemented safety measures at their vendor tent in the past that are now being used to mitigate spread of the virus.

“We’ve both taken food sanitation classes. A lot of things being done to protect the public is stuff we already do. We have a hand-washing station at the table because we use it a lot,” she said, noting they’ve also become accustomed to wearing face masks.

McCarty believes the public is as anxious as the vendors for the market to open.

“I think people will enjoy being outside. I hope to see everybody come out and work with us and try to keep everybody safe and healthy,” she said.

The market will be open Saturdays from 8 a.m. to noon on the old courthouse square in downtown Effingham.