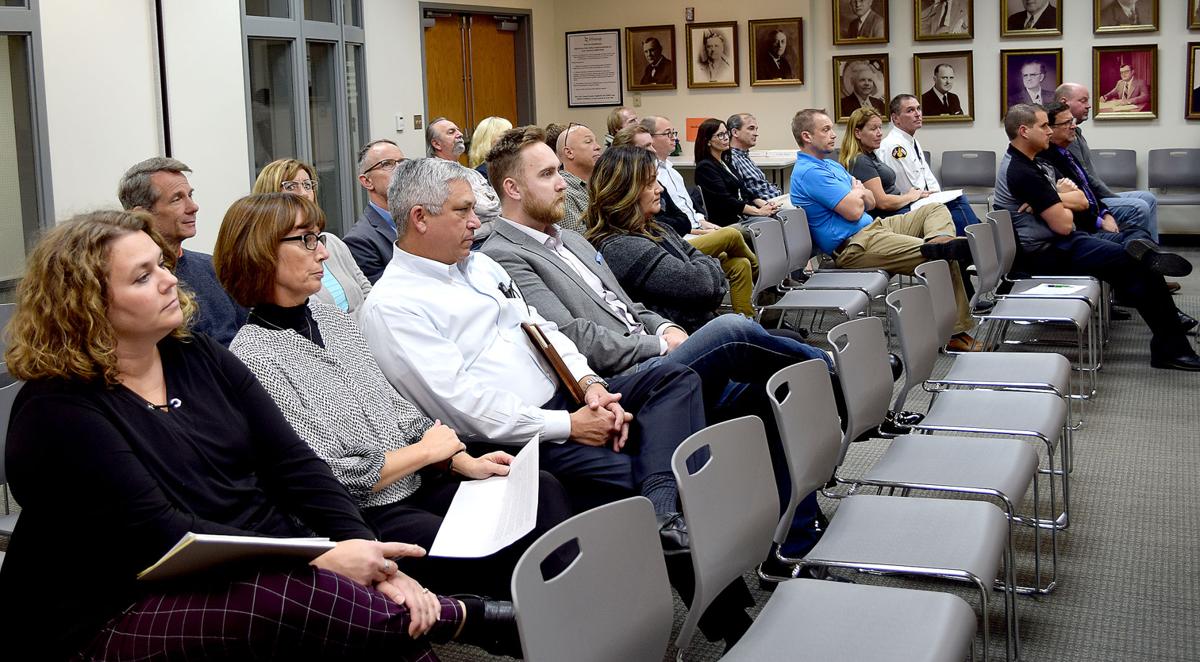 In all there were 14 speaker's cards taken out to address the Effingham City Council on the topic of allowing the sale of recreational cannabis in Effingham. 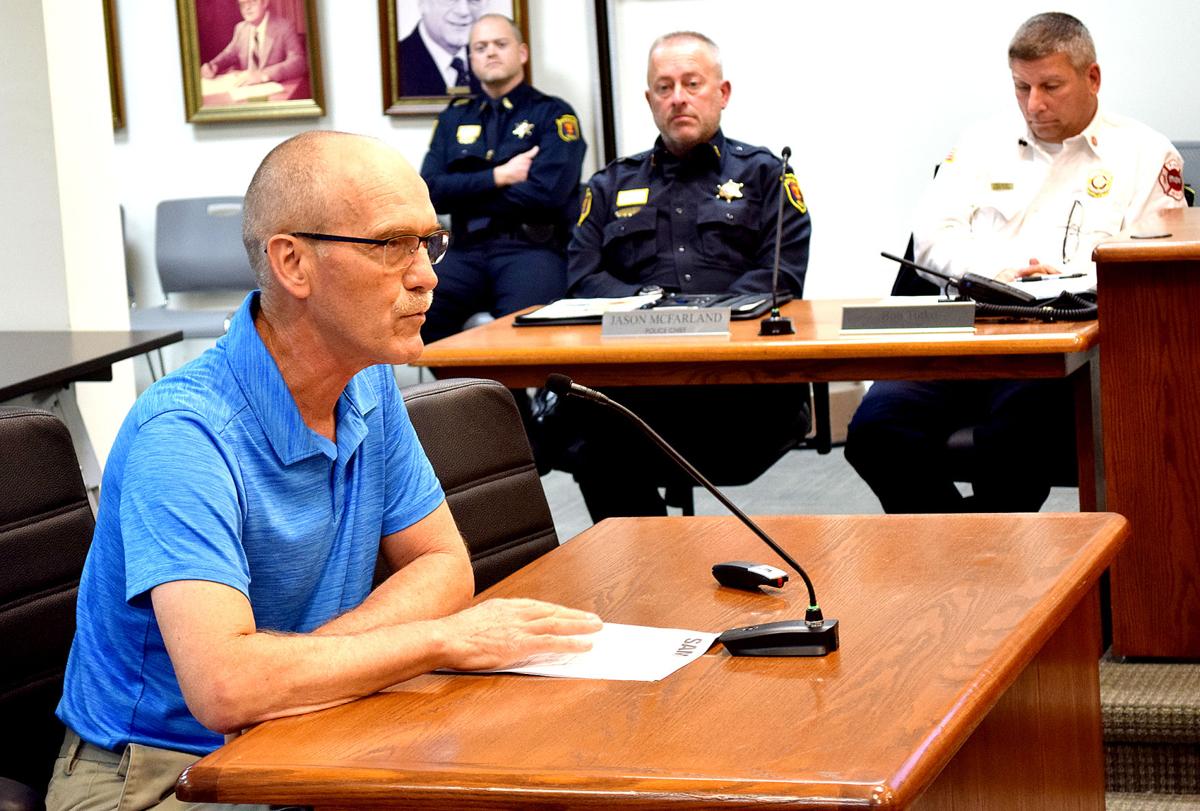 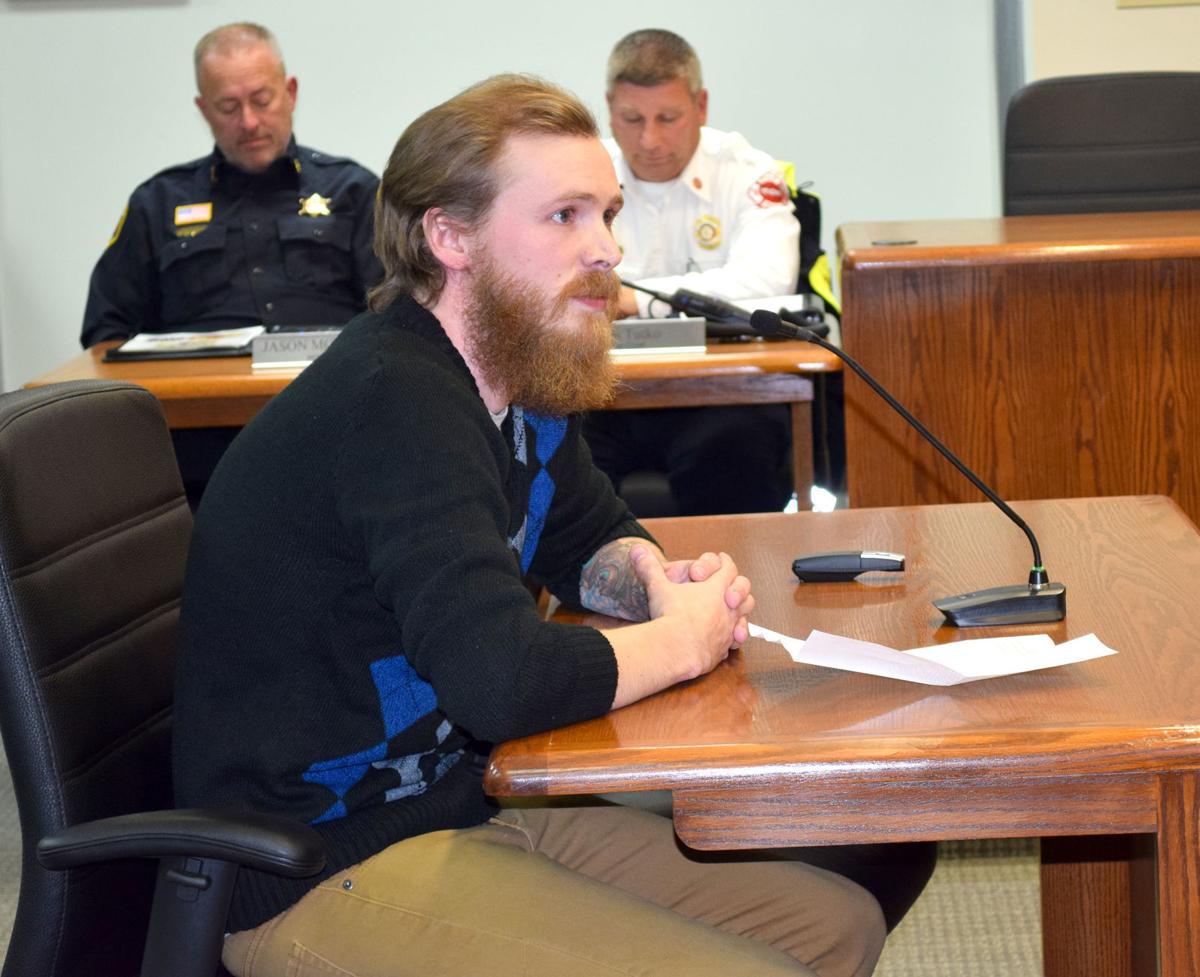 Travis Diss an employee of The Clinic Effingham speaks in favor of the sale of recreational cannabis in Effingham during Tuesday's Effingham City Council. 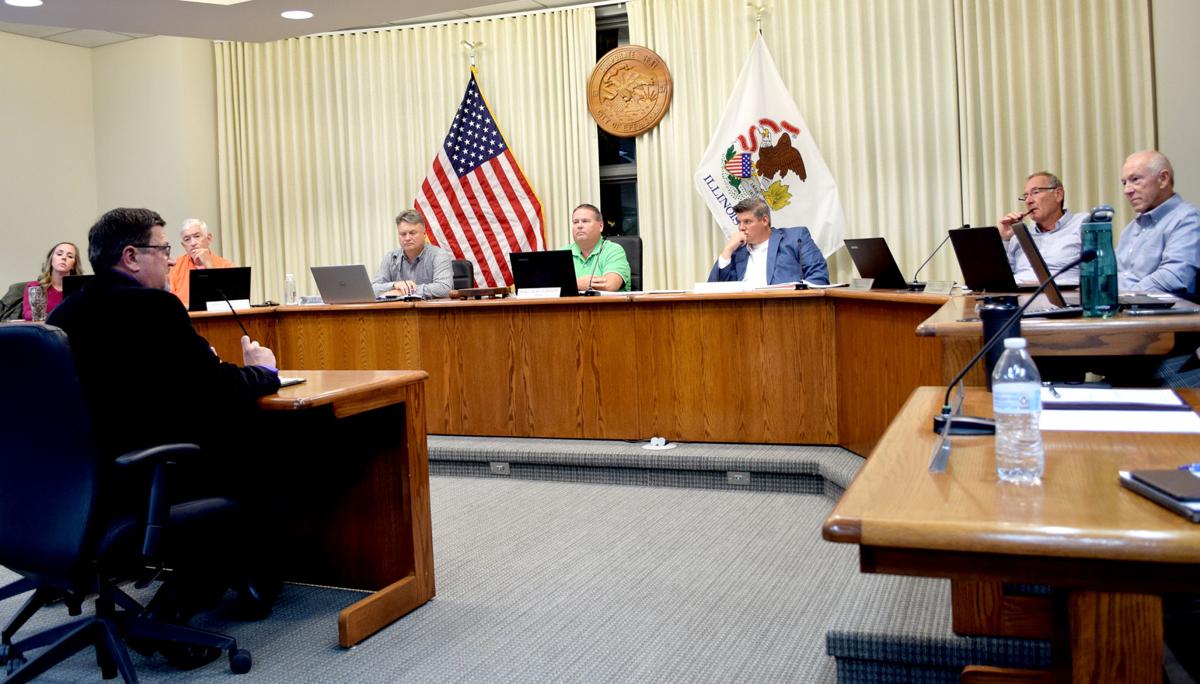 Effingham City Council listens to Jim Hinklle speak in favor of the sale of recreational cannabis in Effingham. 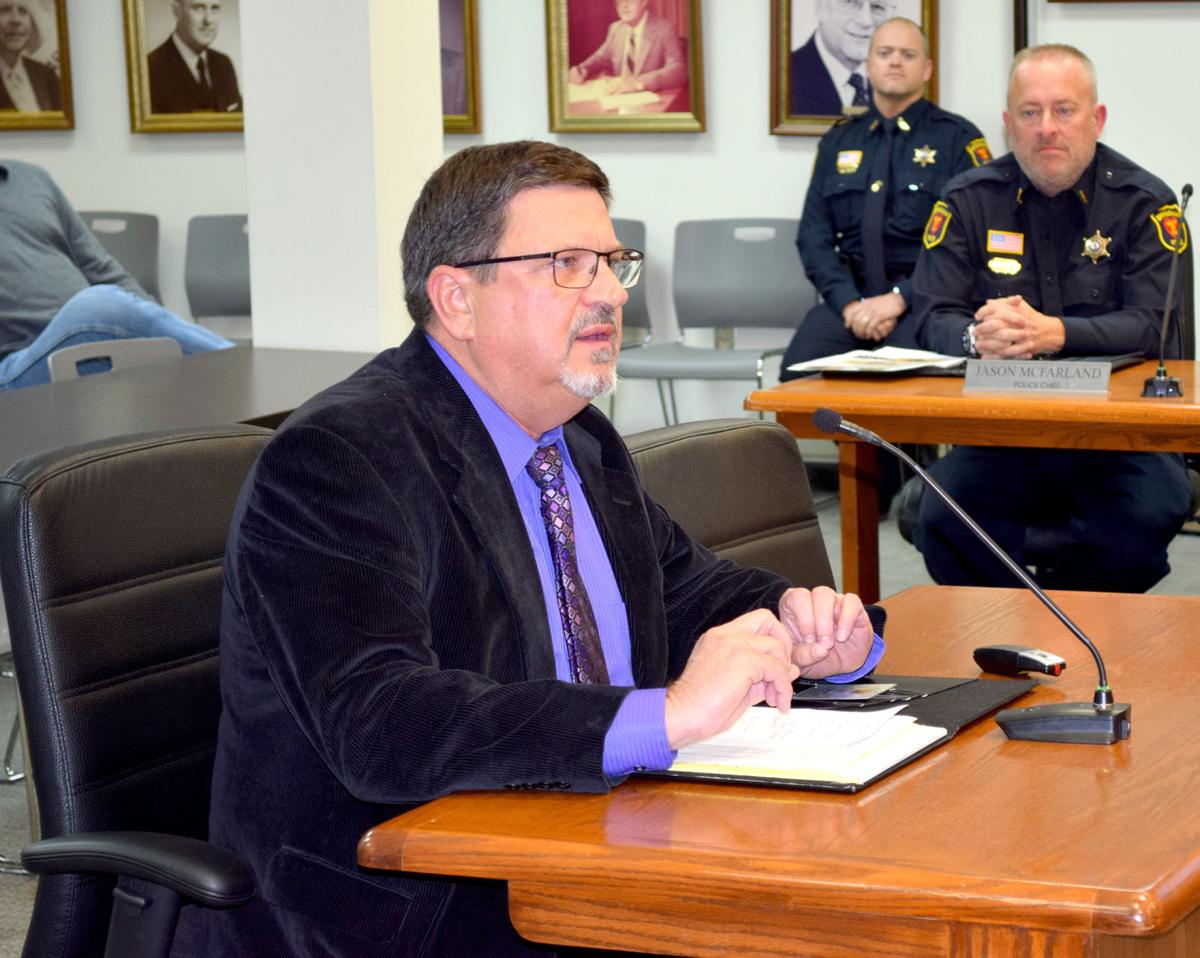 Jim Hinklle, a retired law enforcement agent, spoke in favor on the topic of the sale legalized recreational cannabis because of the financial benefits, during public comment period at Effingham City Council on Tuesday.

In all there were 14 speaker's cards taken out to address the Effingham City Council on the topic of allowing the sale of recreational cannabis in Effingham.

Travis Diss an employee of The Clinic Effingham speaks in favor of the sale of recreational cannabis in Effingham during Tuesday's Effingham City Council.

Effingham City Council listens to Jim Hinklle speak in favor of the sale of recreational cannabis in Effingham.

Jim Hinklle, a retired law enforcement agent, spoke in favor on the topic of the sale legalized recreational cannabis because of the financial benefits, during public comment period at Effingham City Council on Tuesday.

Effingham Mayor Mike Schutzbach said in October that he wanted the topic of whether or not to allow the sale of recreational cannabis in the city to be “over discussed.” He has allotted time during three council meetings for the topic.

During Tuesday’s Effingham City Council, he announced that 14 people had notified City Hall that they wished to speak on the topic, however a few were not present. Three of those speaking in favor were employees of The Clinic Effingham, the local medical cannabis dispensary. Others were community members and professionals.

Next, on Nov. 19, after the third and final time to allow for public comment, the council is expected to vote on the matter. The city could tax up to 3 percent on recreational cannabis sales.

On June 25, 2019, Gov. J.B. Pritzker signed the Cannabis Regulation and Tax Act, which officially made Illinois the 11th state to legalize recreational cannabis. This follows action in 2014 under Gov. Pat Quinn when Illinois became the 20th state under The Compassionate Use of Medical Cannabis Act, allowing medical patients to use regulated products from licensed dispensaries.

Local advocates stressed the revenue Effingham could reap from the sales. Some commented that people are already using marijuana in Effingham anyway, so why not provide them a place to purchase a regulated product? Some talked about the health benefits of medicinal marijuana already being dispensed here, and how others could reap benefits without going through the fees and paperwork.

Those opposed to the sale in Effingham stated that the city council should look at the opportunity not as a financial benefit, but as a detriment to the health of the community. Two physicians talked about the interactions of mixing cannabis with other prescription drugs. Some worry about the dangers of having people under the influence while driving, or interacting in the community with impaired judgment.

Brian Larson, a local businessman, spoke in favor of allowing the sale of recreational cannabis in Effingham. He said, “Today, thousands of people are using cannabis in our community.”

He added that some are using it legally, using the medical cannabis program, or obtaining it illegally. The council needs to decide if Effingham will benefit from the change, he said.

“A vote in support of regulated local cannabis sales will open the door to more jobs, more tourist offerings and more revenue. Revenue that could be directed to address local concerns regarding under age substance abuse of all kinds,” said Larson.

A vote against won’t lessen the use of cannabis in general in Effingham, Larson said. It won’t keep adults from possessing cannabis. It won’t make our community, our families, or our children safer, he said.

Jim Hinklle, a retired law enforcement officer, said he wishes nobody would use alcohol, illicit drugs, tobacco and cannabis. But he said since recreational cannabis is here, Effingham should reap the financial benefits.

Hinklle said marijuana is here to stay and has been here for many years already. He said a report he read showed that Illinois is expected to generate 23,000 jobs the first year, and $525 million in tax revenue annually.

“The fact is – it is here,” said Hinklle. “If you all don’t legalize (the sale) it one of your neighbors are going to legalize it and when they do, they will capitalize on the tax revenue. Your city and county ordinances cannot supercede or ‘out rule’ a state law. The state law cannot out rule a federal law.”

Hinklle said by voting for the sale of recreational cannabis a council isn’t condoning the use of it, but instead what is best for this community.

“That would be bringing more jobs and more tax revenue,” said Hinklle. “That’s how it is. That’s how the city maintains – by bringing in more tax (money).”

Derrick Morrell encouraged the council to approve the sale so veterans such as himself can be better served. The adult use is coming and some community will benefit from its sales, he pleaded.

“Will you help mold this industry or will you turn your back?” asked Morrell.

Travis Diss, an employee of The Clinic Effingham, said for those who can’t get a medicinal cannabis card due to their residency, can still get the benefits of consuming the product by buying it in Effingham. He said while they are here they also stop at local restaurants.

“They will travel to get this,” said Diss. “We have people who travel upwards of two to three hours just to get the cannabis.”

Diss said adult use sales here in Effingham, would be an exchange of money at the counter for the product, and not be forced to go into a bar for a purchase – or end up in an unsafe situation – and not “do some back alley deal anywhere.”

On the flip side, not everyone who spoke saw it as a good thing.

Dr. Michael Brummer, a family physician in Effingham, shared statistics about problems the State of Colorado is having since the legalization of cannabis there. His numbers reflected stats from 2013.

“The point is that we understand that the state is making this legal, but do we as a community have the resources to deal with statistics like this?" asked Brummer. “As far as my patients and your families health and well-being, I’m looking at this as a local health issue, rather than a financial issue.”

Brummer said for every dollar of tax revenue a community gets for alcohol sales, the society loses 10 percent in social costs – whether that’s health care or lost work.

“So, in my mind, this is not a financial issue, but this is a community health and well-being issue,” said Brummer.

Another family physician, Dr. Jeff Crowell, also spoke against recreational use, calling it an addictive substance. He said the drug is getting stronger, too. It is four to five times more potent than it was in the 1990s. He also discussed the danger of mixing cannabis with some prescription drugs.

He said he’s seeing lollipops and mints with significant levels of THC, something that could be desired by young children.

“They sell extracts that are very condensed, very refined cannabis, with 80 percent THC,” said Crowell. “When you are selling edibles that look like mints, that look like lollipops, chocolate or gummy bears, the kids are going to get them.”

Illinois leads the nation in the number of qualifying conditions – 52 – for medical cannabis, he said. So, drug interaction is a serious concern and that staff at the dispensary might not always be aware.

“I am not opposed to medical marijuana as there are some distinct uses for it, but there are also some side effects and drug interactions that I don’t believe The Clinic will go through the effort to know if they are taking Plavix (drug to prevent heart attack) or not.”

A physician or pharmacist are trained in these areas, he said.

Vicki Wenthe opposes recreational cannabis, although she is OK with the medicinal use, for those who qualify and need the product.

“I’m not opposed to medical cannabis . . . however, I don’t see the need for recreational use here in Effingham,” said Wenthe. “I’m opposed to it for a variety of reasons.”

She said the City Council’s vote of ‘yes’ or ‘no’ will set the image for Effingham. Wenthe said she’d hope instead that Effingham would be known for a town “with a great atmosphere” and “wonderful community events,” rather than a place to buy marijuana.

“I want to keep our children as safe as possible,” said Wenthe. “I don’t want to increase the number of people in our community already using marijuana. I’ve overheard grown adults right here in our community say that if they do sell it here in Effingham, they may have to try it once to see what it is like.”

Andrea Wright said she wants to be a voice against the sale of recreational use cannabis. Like others, she’s attended both City Council meetings on this topic.

“I believe it is our duty to do everything in our power to protect our community, especially being vigilant in protecting our children,” said Wright. “Recreational marijuana being sold here is a threat to the safety and stability of our community and our children.”

While many people who spoke said that it would be good to have the chance to use recreational for medicinal reasons, while the other most popular reason for supporting recreational sales is simply financially driven, she said.

“I understand that this would be a money maker for our town, but at what cost?” asked Wright. “It would be easy access for everyone. This would mean more people with marijuana in their system in our community. There will be more people driving under the influence . . . it could lead to more people with impaired judgment in and around our town.”

The mayor and three commissioners did offer some statements at the end of the public comment period this week.

Commissioner Gillenwater suggested the council look beyond the dollars.

“It seems like we are hearing so much about the dollar, that nobody wants to say anything negative,” said Gillenwater. “And the money is great. But, as you just said, there are costs that come along with that. Our own chief is talking about having to add more officers because of the problems we are going to have.”

Commissioner Larry Micenheimer said: “We’ve had a lot of good arguments against cannabis use. But are we going to be the organization and city that controls the sale of it locally – and use the creative use of the revenue to help with addictions and other programs that we already currently have?"

Commissioner Hank Stephens had said earlier that, “One of my frustrations is you seem to be able to find an article to support whatever you want to support.”

Schutzbach said, “Does Effingham want to be the face of the sales of marijuana for the area? Because in the state of Illinois it is legal. Do we want to be the poster child for it?”