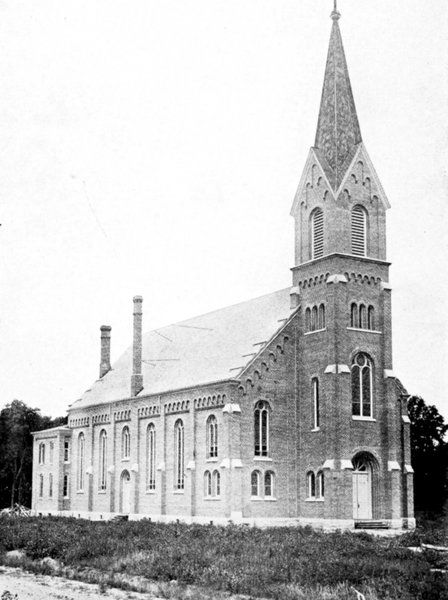 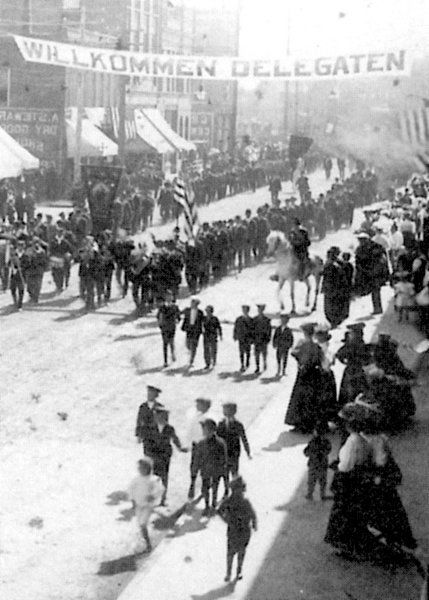 A photo of the German Catholic convention in 1907. Submitted photo 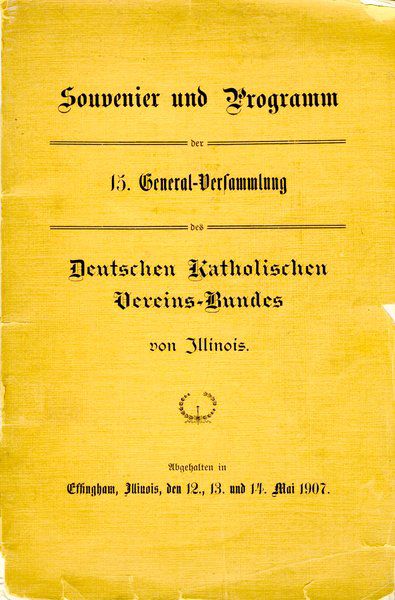 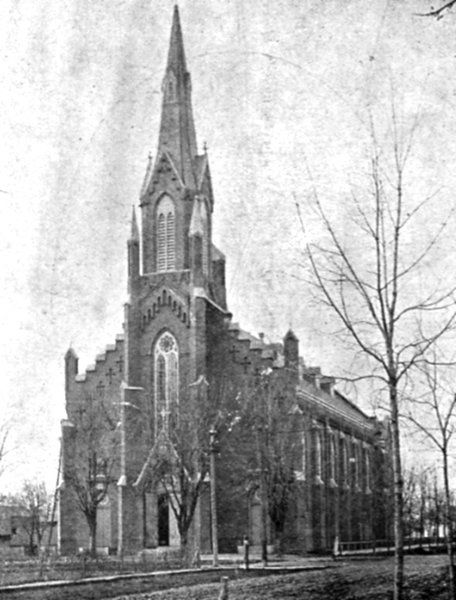 A photo of the German Catholic convention in 1907. Submitted photo

As over 1,500 conventioneers with their spouses gathered in Effingham for the 15th annual meeting of the Federation of German Catholic Societies of Illinois in mid-May of 1907, the large banner high above Effingham’s Jefferson Avenue boldly proclaimed “Willkommen Delegaten.” The event was an immense undertaking involving numbers of people from nearly all area parishes, with St. Anthony German Catholic church serving as the host congregation.

These delegates brought with them concerns about the millions of Germans who had migrated to the United States during the 19th century. The immigrants sought opportunities for a better way of life, but church leaders were greatly concerned that in this new land many would drift away from their Roman Catholic roots. Even for those who settled in communities where they had a common religious and ethnic bond with many fellow migrants, there were other challenges to be faced. There was a struggle with the culture. The new land presented moral temptations on a grand scale.

In order to counter these problems, The Illinois Federation of German Catholic Societies came into existence in Peoria in July of 1893. Its chief purposes were very contemporary sounding: 1. “To guard the sanctity of marital and family relations,” 2. “The maintenance and furtherance of Christian education as instilled in Catholic parochial schools,” and 3. “The advocacy of good morals in general.”

Local chapters of the federation worked diligently in order to accomplish the above purposes. Annually the local chapters met in statewide meetings intending to inspire ever greater levels of success and to encourage the members to persevere. Peoria, Quincy, Joliet, Springfield, Freeport, East St. Louis, Chicago, Aurora, Bloomington, and Peru had been among the locations where earlier conventions were held. Then at the 1906 convention in Quincy, the federation decided that Effingham would be the next meeting site. That was quite an honor for the community and area as was evidenced by Effingham Mayor John Shea’s appeal to the citizens of the community during the week immediately preceding the event. In a message printed in a local newspaper, he urgently requested “that on this occasion all business houses in the city, as well as residences, especially those along the line of parade, be decorated with our national colors, and the streets cleared of all rubbish, thereby paying our respects to our guests.”

Excitement was in the air, not only in Effingham County, but throughout the state of Illinois. When the Wabash Railroad organized a special excursion train to bring visitors to Effingham from the Springfield and Decatur areas, hundreds of tickets were quickly sold.

In Decatur on the day the convention began, local rector, Father Teppe, from St. James German Catholic Church, held an early morning Mass especially for the over 250 residents who were traveling on the special train to the convention. Among their number was the Goodman Band, which had a major role in the parade in Effingham. Also on the train was a band from Springfield.

When the delegation arrived in the host city, they found a wonderfully beautiful day and a city filled with people anxious to attend the opening day’s session of the 15th annual convention of the German So­cieties of Illinois. Mayor Shea’s appeal had been heeded. The town looked great.

Prior to the excursion train, the first big delegation arriving that morning was from Sigel. Over 200 in number, they were bursting with enthusiasm as they arrived at the depot. By noon, Effingham was filled with peo­ple lining the streets. As evidenced by the huge “Willkommen Delegaten” banner, the community was glad to have the delegates visit. The press reported that even the most conservative estimates regarding the num­ber of visitors present indicated a crowd of between 5,000 and 6,000.

The convention formalities began when President William Rauen of Chicago called the meeting to or­der. Effingham resident B.R. Wolters, as president of the local committees, and the Rev. Lammert, pastor of the St. Anthony congregation, welcomed the guests, briefly addressing them in German. Those speeches were followed by the town’s mayor delivering a warm welcome to the conventioneers.

The chair then appointed a committee on credentials, consisting of nine members from throughout the state, with Joseph Harman of Effingham as the only representative from the local area. That being done, each delegate received an official badge and souvenir, along with a ticket to the Sunday evening performance by St. Anthony’s Dramatic Club.

Next on the agenda, the officers and delegates formed a line and marched over to the parish house. There they met the Right Rev. John Jansen, Bishop of Belleville, who led the procession to the church, where he celebrated Pontifical High Mass. Those assisting were John M. Schaefers, Joseph Meckel, Casimir Hueppe, 0FM, Samuel Maerkel, 0FM and John B. Wand. The Rev. Hagen of Belleville was the master of ceremonies; and the Rev. S.P. Hoffman the assistant. Father Pennartz of Sigel delivered the German sermon for the occasion.

The next major task was that of feeding the delegates. The preparations made by the mothers and girls of St. Anthony parish were put to a test during the day. The number of meals furnished, exclusive of dinner and supper to the bands from Springfield, Decatur and Teutopolis, was estimated at 1,500. The midday meal began about 11:30. The people who partook of this meal were well satisfied with what they received as was shown by the large number returning for supper. The girls and mothers of the congregation had proven themselves very capable hostesses.

By 2 o’clock in the afternoon, 1,000 members of the society from all over the state formed a line nearly a mile long. By 2:30, they were ready to begin walking the parade route, a distance of nearly three miles. With at least 1, 500 in the parade itself, the event was one of “the finest spectacles ever seen in this city,” one reporter wrote. The lengthy formation of the parade was led by the local police, followed by the Marshall of the Day, B. Overbeck, and staff; then came the flag bearers with the American Flag. Next were the various groups: the Teutopolis Silver Cornet Band; Societies from numerous congregations — St. Francis, Teutopolis; St. Aloysius, Bishop Creek; St. Joseph’s , Island Grove; St. Michael’s, Sigel; Sacred Heart, Lillyville; St. Mary’s, Green Creek; St. James, Decatur; Ste. Peter & Paul, Springfield.; Sacred Heart, Springfield.; St. Anthony’s, Effingham, and Societies from the Congregations of Belleville, East St. Louis, Carlyle and other cities; Goodman’s Fourth Regiment Band of Decatur; Officers and Delegates to the State Convention; the Bishop and Priests; and finally, citizens, on horseback and in carriages.

Because the geographic area covered by the city of Effingham in the early 1900s was not nearly as widespread as it is today, sometimes the parade line led through the country with the marchers having farm fields on both sides of their route. A reporter wrote: “At one place, the Goodman band stopped out behind a barn on the edge of an oat field and played a selection which reverberated through the surrounding country and brought people from several miles around to hear and see them.”

In addition to those in the parade, there were also about 800 members of the society from different sections of the state who did not march. The town of Effingham was overflowing with visitors.

Immediately after the parade, nonstop activities began and continued through Wednesday afternoon. Along with were numerous speeches by both prominent clergy and laymen, there were musical concerts and theatrical plays.

Those who attended the convention were amazed by “the finely decorated interior of St. Anthony church; the well arranged building and especially, what won over the hearts of the young, a well-appointed stage.” Father Hoffman, was the recipient of special praise, as was Henry Stockman and his committee who had been responsible for decorating all parish buildings.

When convention business and a special Mass were finished Tuesday morning, the delegates were provided a most memorable time. Immediately after the noon meal, approximately 30 German farmers brought their surreys to the sheds east of the church, where they waited for officers and delegates who wanted to travel to Teutopolis. Due to rainy conditions, for quite a while it was unclear whether or not the trip would be likely; then after a second hard shower, the weather broke. An increasing number of visitors began the short trip to the neighboring village. By four o’clock in the afternoon, accompanied by the local executive committee, the marshal and assistants, and the Vergnuegungs Comite, some 100 of the delegates and officers were in the little German town.

Upon their arrival, the group was highly impressed by being surrounded on all sides by the national and church colors and a special greeting ‘‘Ehre dem den Ehre gebuehrt.” It was very heart-warming when the group passed the church where they heard the bells ringing, and then at the entrance to the hall, they were cordially met by “the good old Father Casimir himself, whose sincere welcome was a treat in itself.”

Once in the hall, Father Casimir gave them an enthusiastic address of welcome; then a German play, “Peter’s Finish,” was presented by the dramatic club; immediately followed by a drill by the girls. The crowd repeatedly and loudly cheered the efforts of both boys and girls because it was such an enjoyable time. Afterward, the company went into the hall below and were given what was called a royal “Dutch Lunch.”

Several of the delegates remained in Teutopolis until late in the afternoon, visiting the church and the college in which the town took so much pride. Then, the group traveled back to the host community.

The Effingham Democrat reported that “After supper, Father Hoffman and the Bewirthungs Comite treated the guests to pleasant hours in the Tyrolese Alps at St. Anthony’s Hall, wherein a smoker was given. The Opera House Orchestra furnished some excellent music, and the Tiroler Quartette rendered some choice German songs.”

By Wednesday afternoon, it was time to bring the 15th annual convention of the German Societies of Illinois to a close. Some of the delegates who had attended many of the meetings of the societies in previous years, had great praise for what they had experienced in Effingham County. They had seen an area which exemplified the pride in both religious and ethnic heritage which the Federation of German Societies was trying to preserve. The meeting was a great success and as such spoke well of the citizens of the area who were diligently working to preserve their Germanic culture.