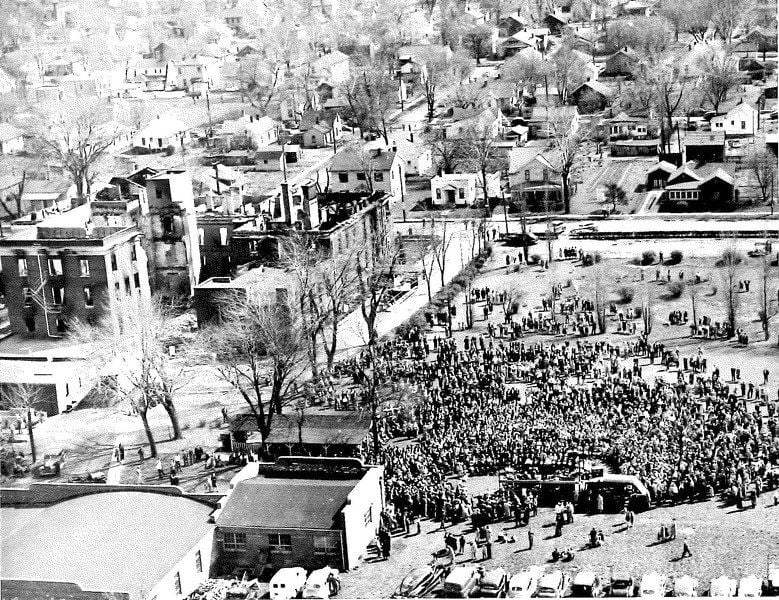 Shown is an aerial view of the memorial service on April 12, 1949, for those who died in the hospital fire. The burned shell of the hospital is shown in the background on the left. 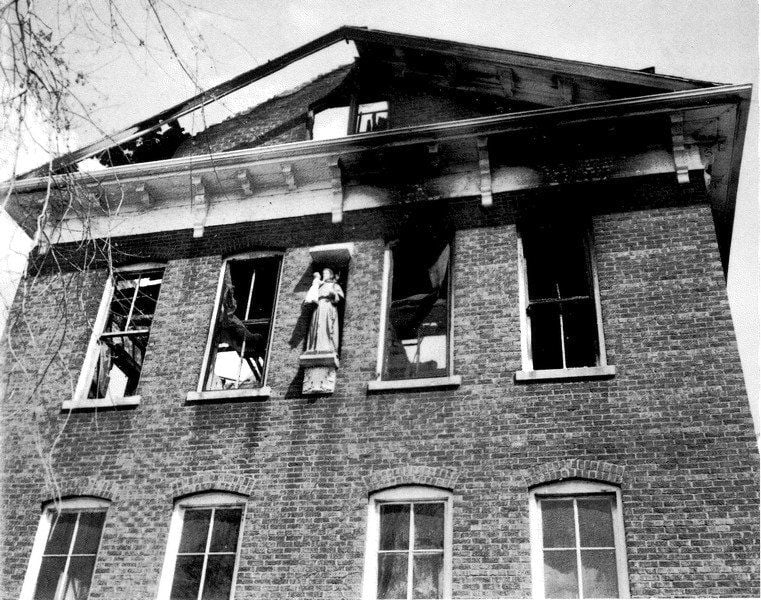 Windows were blown out of the third story of the hospital as the fire raged inside, but the religious statue stood firm. 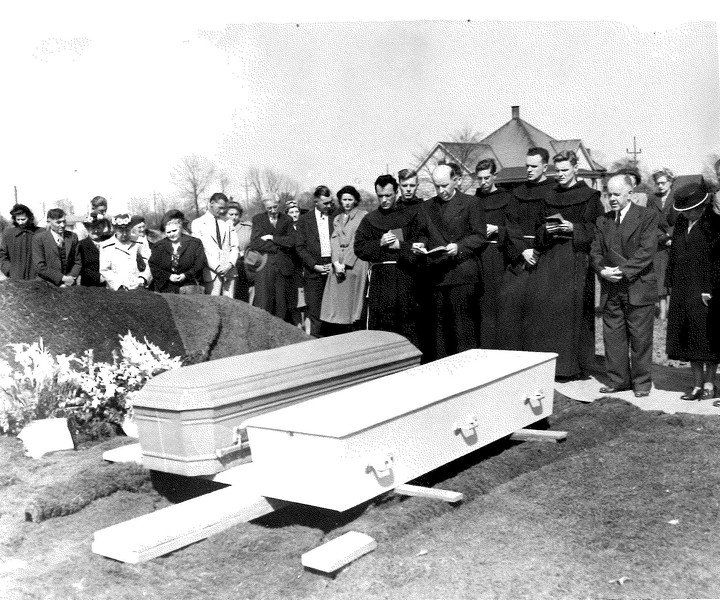 Shown is one of the many funerals held following the fire. 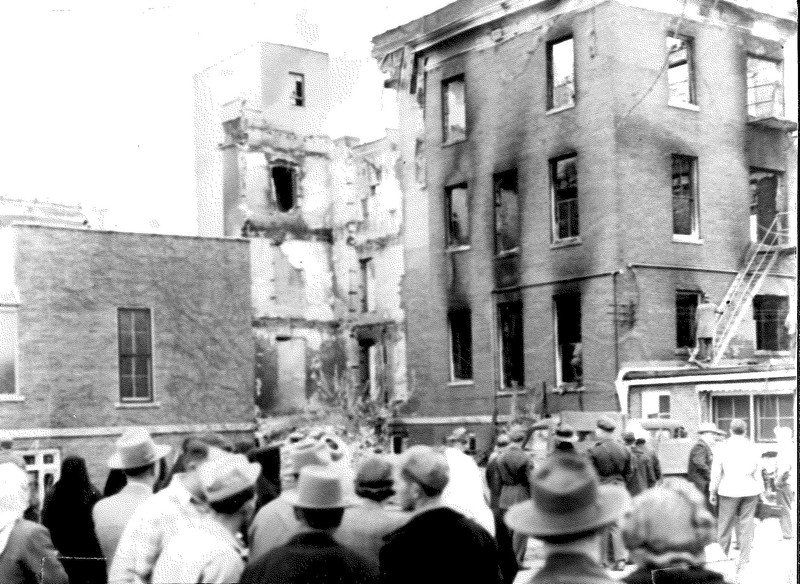 Daily News file photoShown is the rear of the gutted hospital on April 5, 1949. 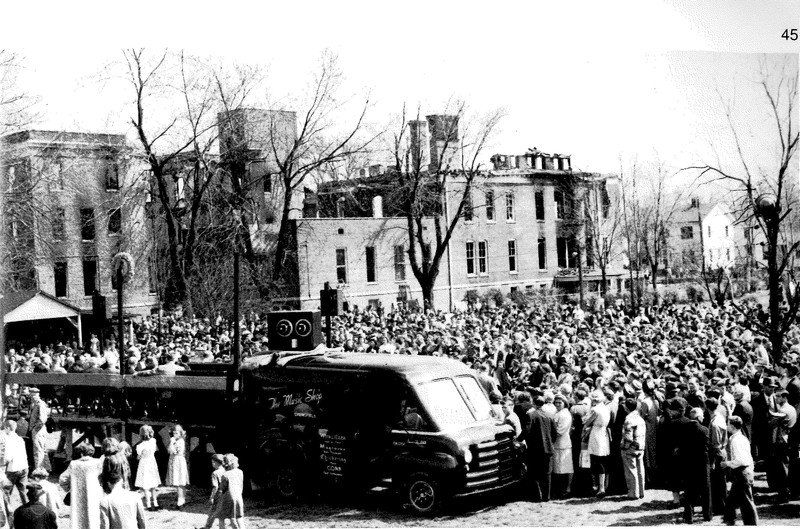 Daily News file photoCrowds flooded the grounds near the hospital during a special memorial service.

Shown is an aerial view of the memorial service on April 12, 1949, for those who died in the hospital fire. The burned shell of the hospital is shown in the background on the left.

Windows were blown out of the third story of the hospital as the fire raged inside, but the religious statue stood firm.

Shown is one of the many funerals held following the fire.

Daily News file photoShown is the rear of the gutted hospital on April 5, 1949.

Daily News file photoCrowds flooded the grounds near the hospital during a special memorial service.

Near the main entry to the hospital is this simple declaration, “Saint Anthony’s Memorial Hospital erected in the year of our Lord 1952.” However, the story behind those words is one of great triumph over the most tragic experience that Effingham County has ever suffered.

A huge number of people stood outside their homes on the night of April 4, 1949, to view a sky which provided an indescribable sense of surrealism. The sky over the city of Effingham was a strange pink with orange color as a result of the fire which burned at the 74-year-old building known as St. Anthony’s Hospital. There were the accompanying sounds as screaming sirens from area fire departments rushed into the town to the scene of great disaster.

The destruction did not take long — only about 10 minutes, as fire quickly spread through the hallways of the 120-bed building. After the firemen had battled the blaze for around three hours, it was finally brought under control. Then came the task of searching for the dead.

That tragic evening there were 128 patients, staff and visitors in the building. Seventy-six of them died in the fire. Temporary housing for rescued patients was quickly established, as was a morgue. Because there was much confusion that evening as families sought word about their loved ones, a headquarters was established for gathering information about the survivors and the deceased.

The emotion of the evening left its mark on the psyche of the area. The piteous screams of those who were burning or leaping from windows left a mark on the minds of people nearby, memories which could not be forgotten.

There were many deeds of heroism and love that night, which also became deeply imprinted memories on the people of the area.

One of the most fitting statements regarding the terrible fire was in the April 18, 1949, issue of Life magazine, which through its photography caught the great emotion characterizing the population of Effingham County. Entitled “SORROW IN THE ‘HEART OF THE USA,” readers were allowed to see the concerns, emotion, anxiety and fears of area residents. Particularity moving were pictures such as that of the Teutopolis school band standing in front of the burned hospital after the group had attended the funeral of one of its members; and of a man in the temporary morgue searching under the blankets for the remains of his six-week-old nephew, a youngster whose parents were too upset to search for themselves; and of a 10-year-old boy sitting in a church service for a funeral being conducted for his father, a man who had died in a frantic attempt to rescue his wife, a hospital nurse. There were also pictures dripping with emotions showing families completing their household routines even though loved ones had burned to death in the fire.

There were stories of great heroism. The Life magazine article, for example, dealt with a young nurse who died with 10 babies in the nursery. “Fern Riley was a Heroine,” detailed how this quiet young women, immediately after the fire broke out, was heard to say, “My babies! I’ve got to stay with my babies.”

Another heroic story revolved around the selfless actions of another young nurse. Her name was Shirley Clements. In an April 24, 2016, Effingham Daily News article, Linda Ruholl related how the courageous young woman was a heroine the night she died: “When the fire broke out, Clements saved several lives by helping patients out of the building. But when she rushed back inside and up the stairs to potentially save more people, the fire had engulfed the building.

On fire, Clements jumped from the second story, clutching a rosary. ... In great pain, Clements was rushed to the hospital in Granite City with her husband.

At Granite City’s hospital, where Clements had studied nursing, she told staff to give her a morphine injection in the toe — the only spot of her body that wasn’t burned. There, her class ring was cut off. ... She died about 12 hours later.”

The casualties continued in the aftermath of the fire. One woman who had lost an 11-year old son in the blaze, after attending a solemn memorial service, died a few hours later from grief and shock.

The gruesome removal of bodies from the burned-out building continued in the days following the fire; then a spirit of renewal and hope swept throughout the county as people began to talk about the need to rebuild the hospital. Soon, as the St. Anthony Memorial Hospital Centennial Report later stated, “Out of the havoc, a community unites.” By three o’clock in the morning, during the night of the fire, a Protestant layman, J. William Everhart, paid a visit to the parish home of a Catholic priest to offer his services in the effort to rebuild the hospital. Within one hour, church and hospital officials accepted his generous proposal. Everhart became the chairman of the hospital finance committee.

Before the end of the same day, an enthusiastic organization, “The Effingham Civic Foundation,” had been assembled to spearhead the effort to get financial contributions from local citizens, and to publicize the endeavor. There were scores of volunteers who mailed appeals by the thousands, as printers located up to 150 miles from the county produced flyers explaining the monetary needs. High school typing classes joined in the effort as they typed letters for mailing. These letters became known as the Dehn letters, named for the author.

$125,000 came into the foundation’s treasury from the greater Effingham area, as well as $406,527.67 from the 48 states which composed the United States at that time, and from four foreign countries. Boy Scouts stood on street corners collecting funds. Especially significant it seemed was the impact of that Life magazine article in publicizing the tragedy and in appealing to the generosity of the American public. Other dollars came from the federal government ($1,690,185.69), the State of Illinois ($487,888.65), and the Hospital Sisters of the Third Order of St. Francis ($1,646,546.67). The last named group also financed the chapel and garage.

The ground-breaking ceremony for the new structure was on Aug. 15, 1951, when the cornerstone was set in place in a solemn ceremony led by Bishop William A. O’Connor of Springfield. Approximately 1,000 people gathered for the event to listen to a series of speakers tell the story of the progress in the rebuilding effort.

When the dedication of the new hospital took place, on May 16, 1954, thousands went to the hospital grounds to hear Illinois’ governor, William Stratton, deliver the main address. Attendees saw that the area had united in triumph over one of the great tragedies in the nation’s history. From the ashes, a structure of great beauty had arisen. The building remains an object of great pride throughout the region.