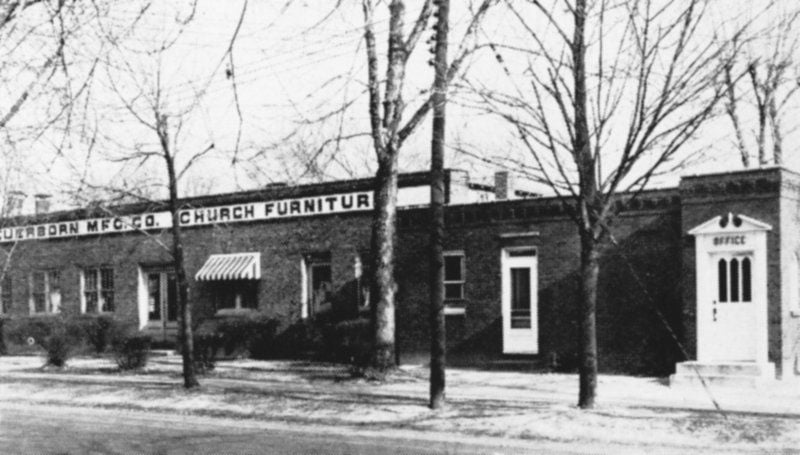 Submitted photosFeuerborns Manufacturing Company as pictured in 1954 in the Effingham “Heart of the USA.” 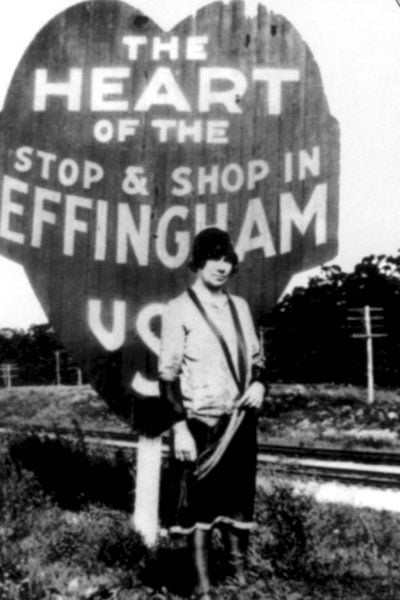 Sign greets visitors to the “The Heart of the USA” Effingham. The sign encouraged visitors to “Stop and Shop in Effingham” in the 1920s.

Submitted photosFeuerborns Manufacturing Company as pictured in 1954 in the Effingham “Heart of the USA.”

Sign greets visitors to the “The Heart of the USA” Effingham. The sign encouraged visitors to “Stop and Shop in Effingham” in the 1920s.

The latter part of the 19th century witnessed great change in Effingham County’s seat of government as it changed from the simple Pre-Civil War village to an up-and-coming commercial center in the middle of the United States. Fortunately, people from the time period of 1866-1930 often left descriptions of the eras of which they were a part. This article uses those descriptions to help the reader reflect on earlier times.

One of the county’s most famous citizens ever, Benson Wood, wrote about his adopted hometown when recalling what Effingham was like in 1866. He wrote the following:

“It was then an incorporated town; not a city. The old Court House, fronting west, where Democrats held their meetings, and the frame building on the corner of Jefferson and Third Streets where the Republicans held theirs, were the only places where the public was accustomed to assemble. At the junction of Fifth Street and the old Brough (pronounced bruff) right of way (today’s Washington Street), was an empty, one-story store building, before that time occupied by Caspar Nolte and then called “Concordia Hall.” Occasionally something was put on the boards in that almost forgotten place.

“On the night of Dec. 11, 1866, the elite of Effingham was there assembled to witness the second entertainment of the “Histrionic Society.” Three short plays were on the program: “Stage-Struck Yankee,” “The Rough Diamond,” and “Loan of a Lover.” In the cast were W. Curson, W.W. Brown, E.J. Curson, Leo Frank, Miss Ada Miser, Miss E. Fleming, J.C. Eversman, William Austin, Miss M. Long, and Wm. McPherson. The Stage Manager and general director (was) Dr. L.W. Smith. ...”

Shortly after 1866, in The Effingham Register, a writer recorded a description of Effingham in 1869. That writer stated that Effingham is a “beautiful young city of about 2500” whose citizens are “far-seeing, shrewd and intelligent”; whose business men are “sharp, enterprising fellows, generous to a fault.” Its ministers in that day ranked as “leaders of thought”; its editors as “men of brains and muscle.” It contained some of the “best men in the county and the handsomest women in the state.”

The reporter went on to describe leading personalities in the town: He mentioned that Craddock & Habing were bankers; Henry Eversman, the manager of the J.F. Waschefort store which fronted the Illinois Central... Tom Brown sold hardware at Mrs. Loy’s corner. Henry Kepley practiced law, and of him, the author said “rogues know what to fear when he pleads the case against them.” The Wood Bros. and their partner, W.H. Barlow, were law partners.

In Jack Rankins’ Photographic Gallery, the writer stated that “Art has her abode; in his rooms she nestles and luxuriates.” Koester & Mussman (Barney) “kept everything in the furniture line, including every style of coffin.” Little & Thompson were druggists. William Holdzkom was the saddler. Dr. Groves advertised as a “Surgeon and Physician”; L.W. Smith, John L. McCoy, L.J. Willien, W.S. and W.L. Goodell, and Wesley Thompson had cards as physicians. R.B. Rutherford, Watson & Gilmore, Wood & Barlow, H.B. Kepley, D.N. Wood, H.C. Brumbock and J.N. Gavin were the lawyers in the growing city.

Due to the mode of transportation, many businesses were related to providing services related to horses. A.G. Hughes combined a real estate agency with horse shoeing. Harry Moore and also his brothers, A.S. and Samuel, represented the livery business.

There were numerous businesses in the town: George Screeton ran the “Gillenwater House.” George Ewers carried on Merchant Tailoring on the north side of Court house Square. H.C. Bradsby edited the Democrat. There were fraternal societies with Tom Brown as High Priest of the Chapter and W.D. Alexander, Worshipful Master, of the Masonic Lodge. Jonathan Arnold was Noble Grand of the Odd Fellows. They were the only such groups in town. J.L. Bachman had a “shaving and hair dressing saloon” on Jefferson Avenue between Front and Banker. Later he moved the business to Banker Street.

The Vandalia road was not then completed east of Effingham. The round house and machine shops were in process of erection. The existing passenger station, which is termed a “fine depot” had just been finished. Growth continued through the rest of the century and into the next.

A visitor to Effingham in 1926 would have found that it was an important railroad crossing hub with tracks radiating out in six directions. The main line of the Illinois Central intersected here the mainline of the Pennsylvania between St. Louis and the east.

Those who entered Effingham by train found a union station costing probably $125,000, with red brick, wide walks, and a spot that in summer was green with a red heart in it, alongside an expanse of tracks which were wide, heavy and businesslike. The red heart had become Effingham’s trademark — “The heart of the U.S.A.”

Effingham was a hub not only for railroads, but also for concrete roads. The Egyptian Trail crossed the National Trail at Effingham. Five strips of concrete radiated from the town in anticipation of a sixth. Effingham was the place where the concrete road movement started. The agitation for such began in the early 1900s.

Effingham was a pioneering community in other ways besides highways. The Illinois College of Photography billed itself as the first and the only college of photography in the world giving a complete course in photography, in photo engraving, in airbrush work, and all the lines necessary to turn out a complete photographer or photo engraver.

Students came to the school from India, Armenia, Russia, China, Japan, Jaco Slovakia, Greece, Belgium, Congo, the Philippines, Honduras, Mexico, Brazil and Canada. One student entered at the age of 77, another at 82.

The familiar official photo of Calvin Coolidge used in his campaign, was taken by a war veteran, a graduate of the school.

Effingham also made powdered milk. A dairy company said to supply 70 percent of St. Louis milk, 100 miles away, got most of its milk from Effingham. Trucks brought the milk in, over the hard roads, from 40 to 50 miles in every direction. Every morning 30 to 40 trucks lined up at the plant.

The dairy industries, intensely organized in the community, brought a lot of wealth into Effingham County. Dairying put cash in the bank and richness into the soil.

An interesting story from the 1920s showed something of industrial genius in the area. In 1923, Mrs. Frank Cleaver, of Sigel, made a pair of cotton gloves on her sewing machine. They looked like good gloves to her. She began to experiment; more gloves were made and she sold them.

Out of that thought, a business grew — a string of glove-making plants. They were operated at Sigel, Neoga and Teutopolis. Three hundred people worked in those plants, so a fourth was built at Effingham to employ 100 more. That business was finished by 1926.

Effingham was also the home of the Chester Knitting Mill making knitted hosiery.

In 1926, Effingham had the only plant in the world which made “shoulder machines.” These machines made the shoulder, i.e. the dirt shoulder on each side of the concrete strip for concrete roads. Prior to the machine, work was done by hand.

C.J. Moritz was the inventor. He was a highway contractor and president of the Effingham Chamber of Commerce. After he built a new 50-by-130-foot building to make the machines, orders came in from many states because one machine could take the place of many day laborers.

Effingham had a plant exclusively occupied in manufacturing of church furniture. Altars and pews were the chief output. They were shipped to all parts of the nation. This business, operated by the Feuerborn Mfg. Co., was established toward the end of the 1870s.

Conrad Boos started a business in 1887, which dramatically affected the way butcher blocks were made. Instead of using a cut section of a sycamore tree stump which often cracked, leaving a crevice where cut-meat could collect, leading to very unsanitary conditions. The Boos butcher blocks were made of rock maple. The blocks were constructed of many pieces, like the checkerboard, to have the grain of the various strips so turned that there could never be any cracking. By 1926, Boos Block was an old plant with the length of service of the average workmen being 18 years. Labor turnover was not like it was in large cities.

Another unique thing about Effingham was that the local newspaper, The Record, built a permanent demonstration home, consisting of 10 rooms at a cost of about $25,000. Women’s clubs from all over this part of the state were invited to hold meetings there. Byron LeCrone, manager of the newspaper, told a reporter:

“No merchandising will ever be carried on this home. Our own idea is let the women come, see, investigate and learn the meaning of better homes and better living. They can see the furnishings and all that goes to make an ideal home without a salesman at their elbows.

“We have built it because we think nothing is more important to the public today than home improvement. So far as I know there has never been a demonstration of home built anywhere under the condition that surrounded this one. It isn’t for sale.”

By 1926, there was very clear spirit and work ethic in Effingham. Because the town knew the value of organization and teamwork, it achieved goals quickly. For instance, when the town wanted a new railroad station, teamwork and countless visits to railroad officials got it done. When it wanted a new hotel, citizens bought stock. The committee raised in Effingham $102,500. The hotel cost $150,000, a mortgage taking care of the unpaid balance.

“Individually, we’ve got no vast wealth here,” Fred Wenthe, one of Effingham’s most ardent workers, told a reporter. “But collectively, we do what only rich men can do all alone. Collectively we are achieving our ambition.”

There was also spirit of pride in accomplishment evidenced to those who drove the concrete trails into Effingham when they saw the big sign boards with a red heart on each and the flaunting words — “Heart of the U.S.A.”

Sandra Kay Lindsey, 68, of Litchfield, IL, passed away on Sunday, April 18, 2021 at her residence in Litchfield, IL. Born in Grand Prairie Township, Jefferson County, Illinois, the daughter of the late James A. & Delma (Mitchell) Fitzgerald. She was employed as a Dietician for many years…