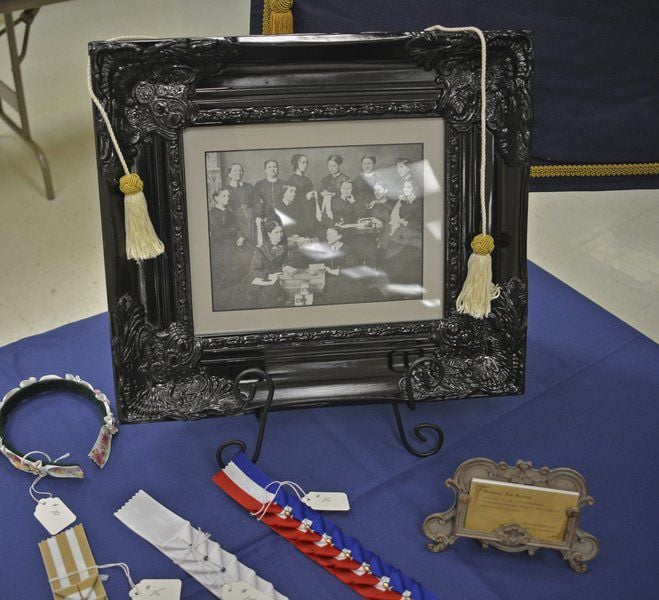 A photo of the Springfield Ladies' Soldiers' Aid Society circa 1863 was on display at the "sanitary fair." Kennedy Nolen photo. 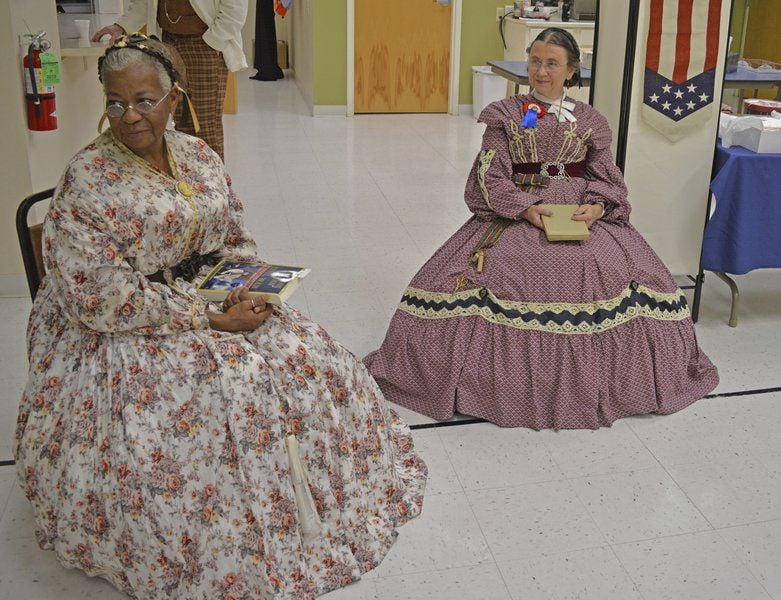 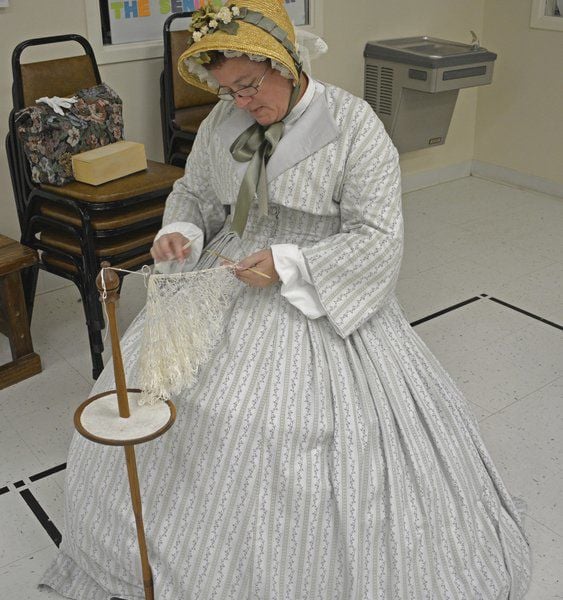 Kennedy Nolen photoLisa McLane, a member of the Springfield Ladies’ Soldiers’ Aid Society, works on netting a hair net Saturday during the “sanitary fair” as part of Shelbyville’s Illinois bicentennial celebration. She said she found the design in a German magazine and has been working on it on and off for a year and a half.

A photo of the Springfield Ladies' Soldiers' Aid Society circa 1863 was on display at the "sanitary fair." Kennedy Nolen photo.

Kennedy Nolen photoLisa McLane, a member of the Springfield Ladies’ Soldiers’ Aid Society, works on netting a hair net Saturday during the “sanitary fair” as part of Shelbyville’s Illinois bicentennial celebration. She said she found the design in a German magazine and has been working on it on and off for a year and a half.

The Springfield Ladies’ Soldiers’ Aid Society recently dressed in Civil War-era clothing and re-enacted a historical “sanitary fair” at the Shelbyville Senior Center, including original pieces and reproductions of quilts, toys, jewelry and embroidered handkerchiefs of the time period.

Laura Reyman, Soldiers’ Aid Society member, said groups of women would come together to make boxes of food, bandages and necessities to send to soldiers in need during the Civil War.

Reyman said as the war went on women needed to raise money, so they would have what came to be called “sanitary fairs.”

Large fairs in New York City and Chicago would be inside of buildings constructed specifically for fairs, and it would be like walking inside a department store, Reyman said.

Multiple projects, including embroidered perforated paper, were on display, and some pieces made by members of the Soldiers’ Aid Society were for sale.

Reyman said this type of craft was “wildly popular.”

“You could turn a piece of paper and thread into it something very elaborate and beautiful,” she said.

Another table had replicas of boxes sent to soldiers during the Civil War. They were full of medicine, fresh produce, canned goods, hospital slippers and things of that nature.

Women joined together to make these boxes to ship off to soldiers, whether the boxes were sent to family members or just soldiers in need.

These fairs would also appeal to children, as they sold toys, dolls and stuffed animals.

Lisa McLane, another member of the Springfield Ladies’ Soldiers’ Aid Society, was making a hair net using a netting technique.

“What the ladies would do is they would have large hair nets and they would line them with silk and stuff them with lambs’ wool, because having a large, lush head of hair was fashionable,” McLane said.

She explained how some women would buy and sell their hair, which was fairly common.

The design McLane was working on was from a German magazine.

“I went to a lady and she is German, so she was able to translate the German for me,” she said.

McLane spent time learning the knot from a woman who makes custom fishing nets and reading manuals and instructions from the Civil War time period, she said.

“I always thought I was a good seamstress until I tackled that first one, and I decided this isn’t for me,” Hudgins joked.

She said her husband convinced her to join the Soldiers’ Aid Society, as he is part of the 114th Illinois Volunteer Infantry Regiment, with which they are affiliated.

“I wasn’t sure when he convinced me to join. But since then, I’ve really gotten into it and have enjoyed it,” Hudgins said.

McLane was the camp cook for the 114th military unit, and her idea for the Soldiers’ Aid Society blossomed from there. It took her about seven years to get everything rolling.

Rosemary Connolly has been involved for five or six years after giving tours a couple times a month at the Old State Capitol in Springfield.

Once Stephanie Thomas retired, she said she needed something to do. She was also working at the Old State Capitol and was asked by members of the Society to join.

McLane said she has always been interested in history, but wanted to learn how people lived during this era.

“I wasn’t really interested in political movements or battles,” she said.

McLane wanted to know what people ate, how they lived, what they wore and things they did for fun. That sparked her interest in being involved in the Soldiers’ Aid Society, she said.

The Springfield Ladies’ Soldiers’ Aid Society also has male members, not just women, although they do outnumber the men, Reyman said.

Kennedy Nolen can be reached by phone at 217-774-2161 ext. 1 or by email at kennedy.nolen@shelbyvilledailyunion.com.