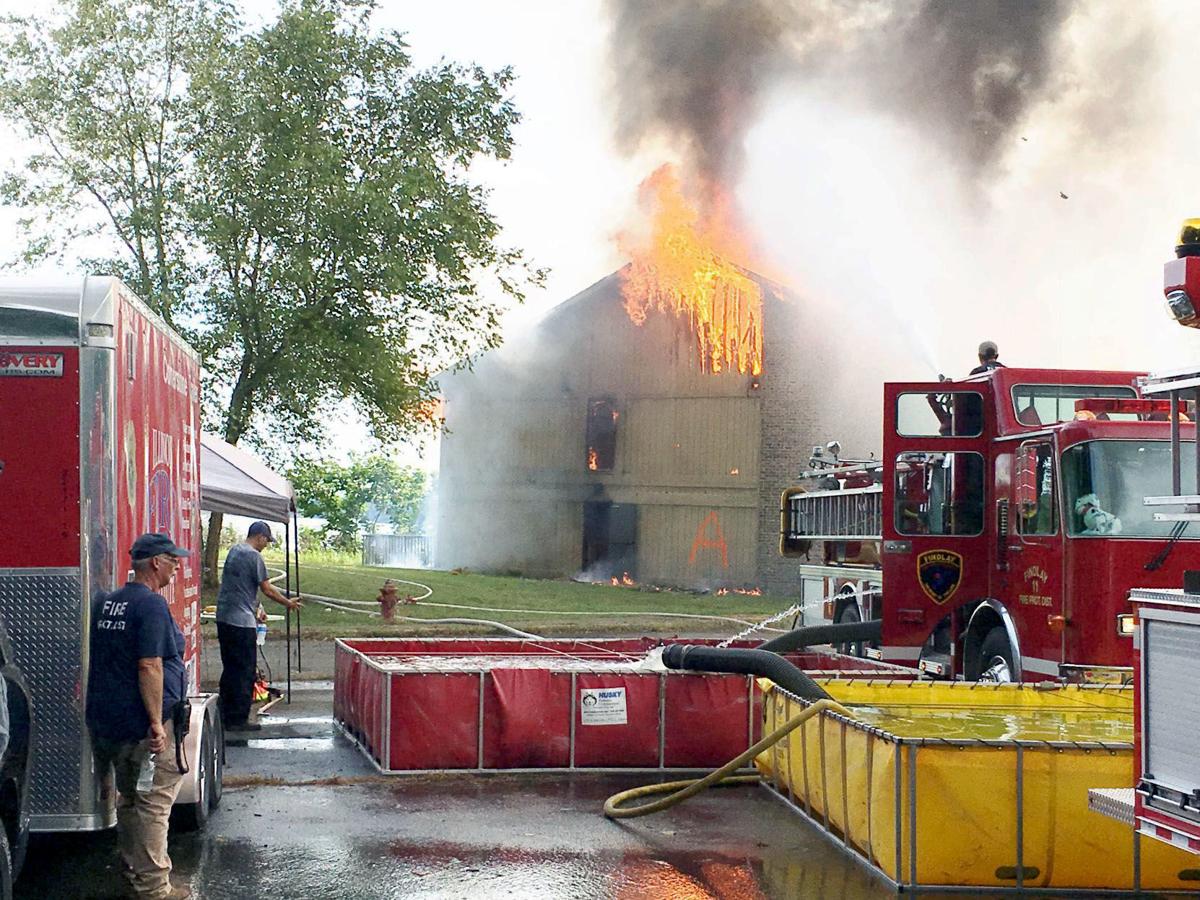 Fire departments pull water from Lake Shelbyville and set up a station to fight the fire at Eagles’ Nest Lodge on Saturday during training. 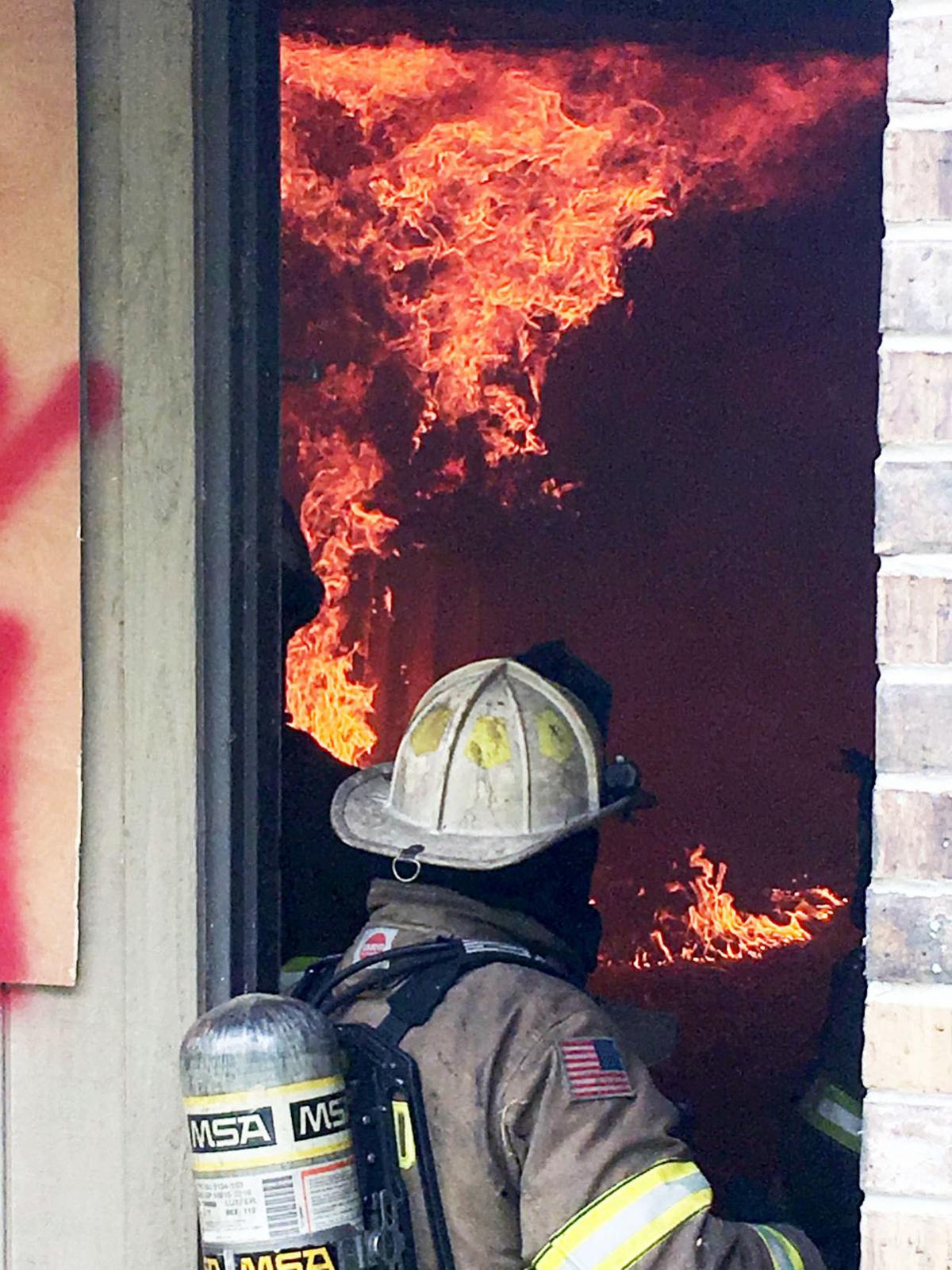 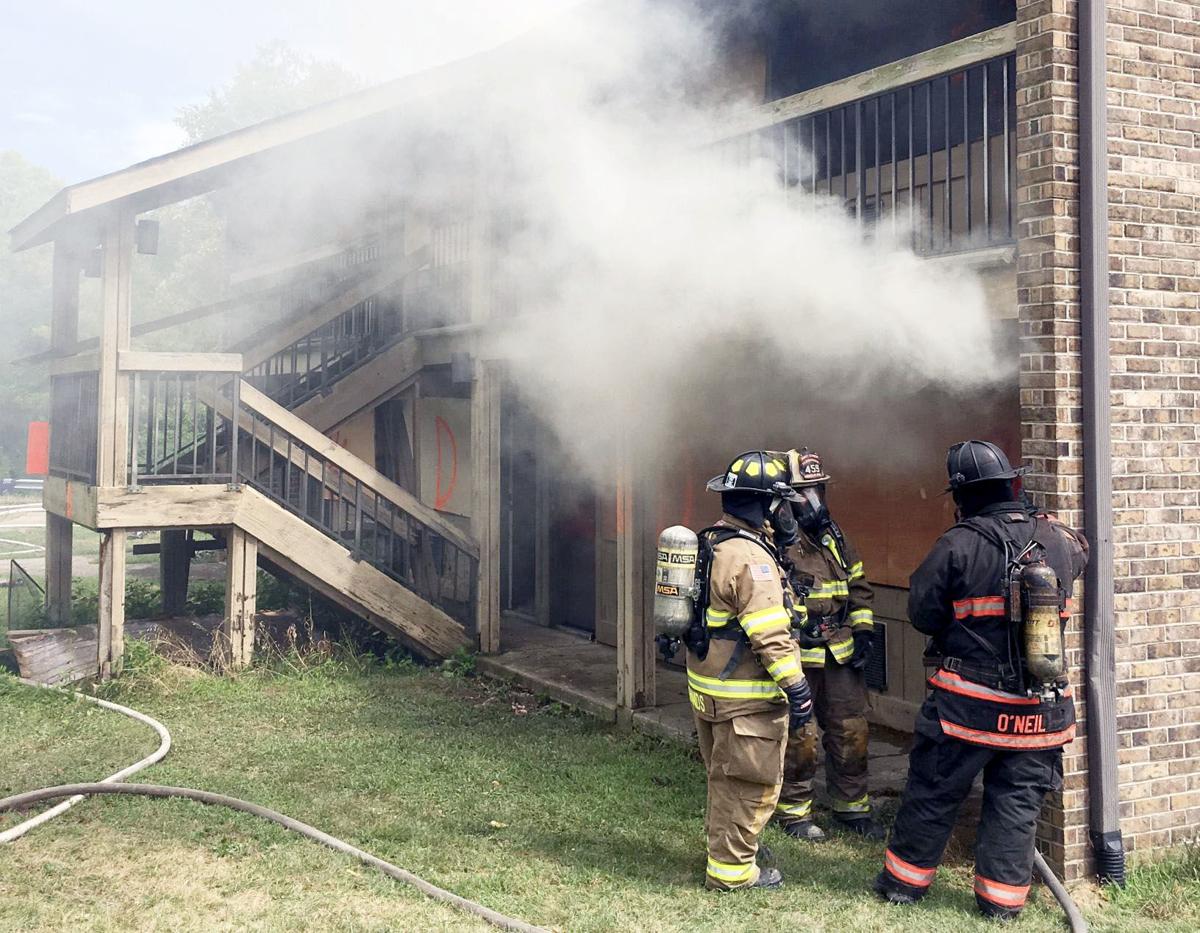 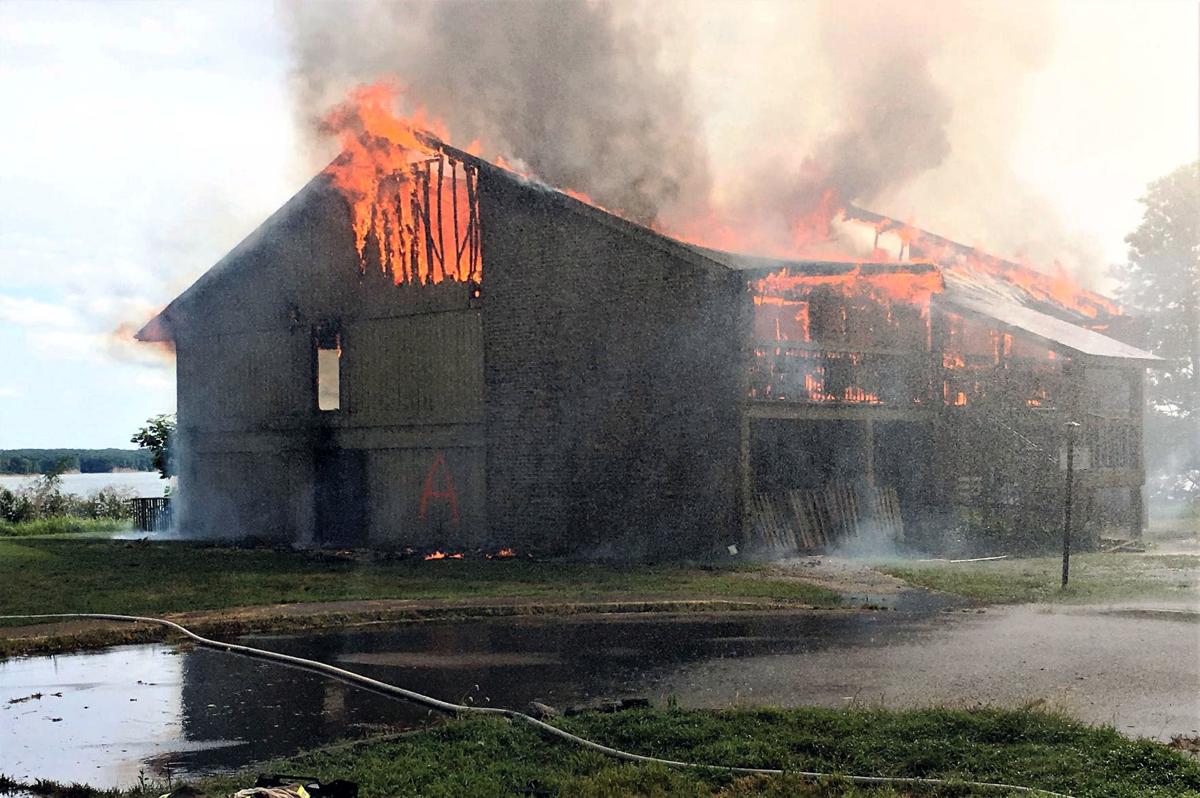 Eagle Nest Lodge burns down with Lake Shelbyville in the background. It was used on Saturday for Illinois Fires Safety Institute fire training for local fire departments, as part of the removal process. 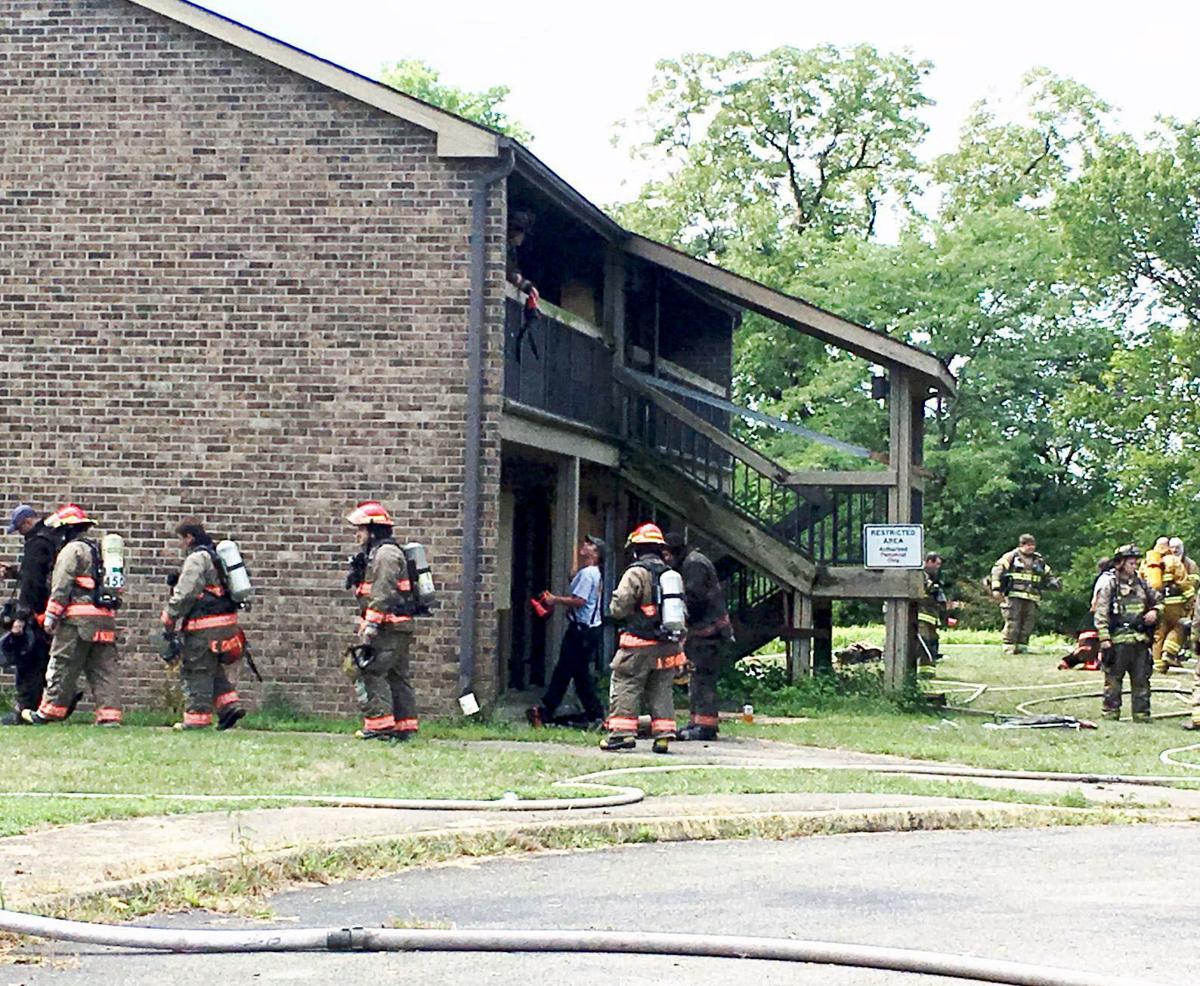 Fire departments pull water from Lake Shelbyville and set up a station to fight the fire at Eagles’ Nest Lodge on Saturday during training.

Eagle Nest Lodge burns down with Lake Shelbyville in the background. It was used on Saturday for Illinois Fires Safety Institute fire training for local fire departments, as part of the removal process.

The first step is complete in the torching of the Eagle Creek Resort on Lake Shelbyville. Eagles’ Nest Lodge was used for fire training and then turned to ashes on Saturday. Eagle Creek Hotel will face the flames next Saturday and Sunday.

According to Illinois Department of Natural Resources Chief of Parks, Ryan Prehn, there were nine fire departments on hand to take part in interior fire training under the direction of the Illinois Fire Safety Institute out of Champaign.

Prehn said that they got set up for training at the Eagles’ Nest Lodge and had the training and then burned Eagles’ Nest down starting about 2 p.m. He said after training, burning down the structure took about six or seven hours.

A thunderstorm came through Saturday morning and interrupted power through the area, but that didn’t ruin the training, according to Findlay Fire Chief Ed Voltenberg.

He said not all firefighter personnel on the ground received the live fire training.

“They got all those who were selected for the training together and divided them into groups with instructors,” Voltenberg said. “They were given different jobs and scenarios. One group went in for the interior fire training and another group would be the back crew. Another group was search and rescue.”

Chief Instructor Tim Meister had said, “The Illinois Fire Service Institute instructors will light one room at a time. Evolution after evolution (firefighter squads) will come in for live fire training and put the fire out. We light another fire in that room and will continue in that room as long as it is safe, then move to another room. We will try to make it as close as possible to a real house fire.”

Voltenberg said that’s what they did.

“After each group went through, they would rotate and the back-up crew would do the live training,” Voltenberg said. “Some of those received training were with members of another fire department. It was good to work with them because we had not worked together before.”

Voltenberg said there were seven rooms designated for the training. Firefighters got four or five burns out of each room they used.

“They did not use all the rooms,” Voltenberg said. “But by the time the training was done, everybody had enough. After the training, we stayed and burned the structure.

“We started about 2 or 2:30 p.m. Once we got it down to a manageable situation, we began releasing other departments. Myself and our assistant chief, Jason Fleshner, and the Eagle Creek State Park Manager John Lay stuck around until about 8:30 p.m.

Voltenberg has been in fire service for 33 years and 12 years at Findlay.

“We’ve burned down houses before.” Voltenberg said. “This was the first time I’ve been part of anything this size. I thought it was valuable. It was real good training. We started relationships with departments we hadn’t worked with before. Should they rebuild Eagle Creek and there is a fire, we know what to do. I was very pleased.”

Voltenberg said they pulled water out of the lake to fight the fire. They filled up their tanker trucks and then moved the trucks to the building. They will do that again next weekend for the remainder of the burn.

Rachel Torbert, deputy director/assistant chief of staff for Communications with IDNR, was on site. She said she has a relative who is a firefighter so she has been to things like this before, but nothing on this scale.

“It worked well for everybody,” Torbert said. “The local fire fighters were able to get additional training. They had nothing but good things to say about the Fire Institute with their capabilities and their expertise”

“A lot of these fire departments are volunteer and this training means the people in their fire protection district will have greater protection because of this training. It also helped us to get rid of a structure that needed removal.”

On Saturday, Eagle Creek Resort hotel and conference center will be burned, but there will be no interior fire training done. If need be, the resort will also be burned on Sunday to complete the job. The debris will then be hauled away and the grounds returned to their natural state, hopefully for possible development in the near future.