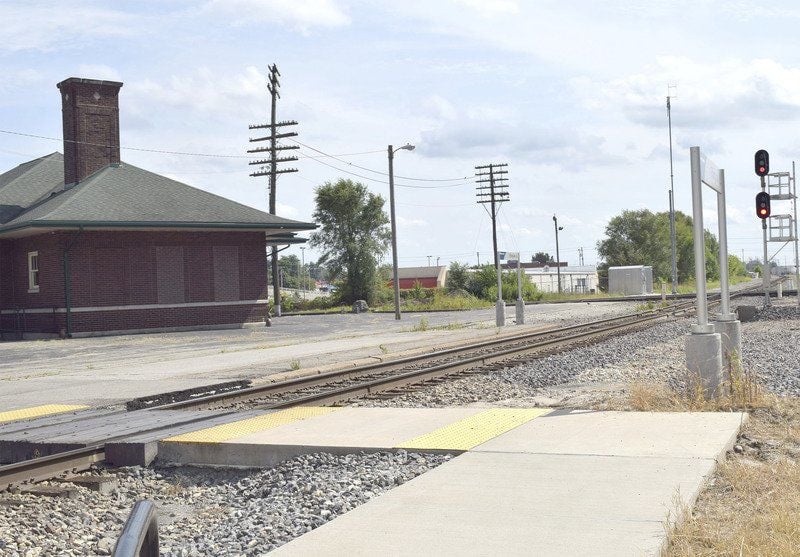 Dawn Schabbing photoImprovements made to a pedestrian train crossing by Amtrak at the Effingham Amtrak station recently are not compliant for a Quiet Zone regulation. Upgrading this to be in full compliance for Quiet Zone, meaning train horns won’t be blown in certain areas, could take more time than anticipated. 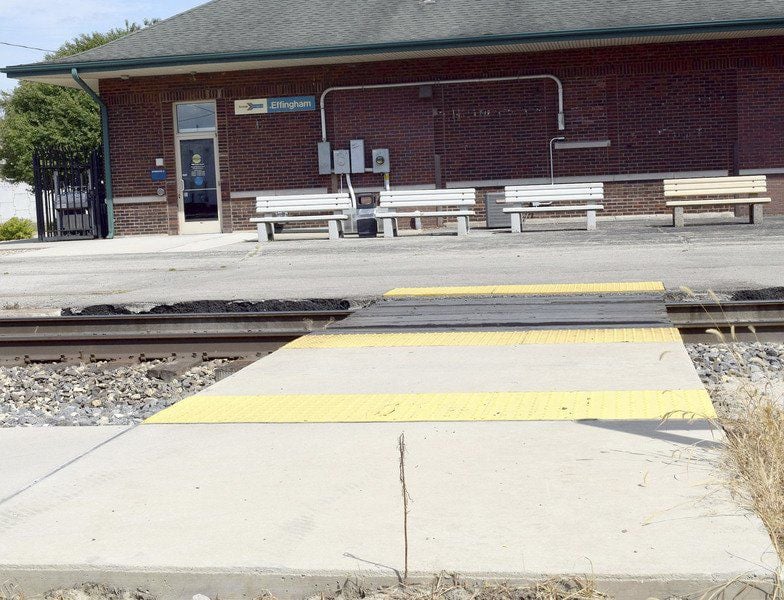 Dawn Schabbing photoImprovements made to a pedestrian train crossing by Amtrak at the Effingham Amtrak station recently are not compliant for a Quiet Zone regulation. Upgrading this to be in full compliance for Quiet Zone, meaning train horns won’t be blown in certain areas, could take more time than anticipated.

EFFINGHAM — The City of Effingham’s quest to silence train horns throughout the city will take longer than anticipated. But city officials are hopeful some horns may be quieted in the meantime.

The city is working on reducing the noise created by train horns as each one passes through Effingham on the Canadian National rail line, especially in the residential areas. However, the deal comes with an exchange of installing expensive safety measures.

When all safety features are in place, trains will be allowed to travel through without the need to sound their horns, except in cases of an emergency.

The city has been trudging along picking up grants where possible to pay for the safety features. It has closed an unsafe crossing to bring six crossings along the Canadian National Railroad into compliance with safety measures, including lights, gates and delineators to decrease the risk index at crossings.

Slowing down progress of the project is the Amtrak station pedestrian crossing located in the middle of the proposed quiet zone rail line. The crossing will require upgrades before it can be considered eligible by the Illinois Commerce Commission, thereby making Effingham almost free from the sound of train horns.

Director of Public Works Jeremy Heuerman said more funds are being sought to upgrade that pedestrian crossing and it might take years to get the grants needed. He estimated on Thursday the signals and gates will cost around $350,000 to make that single crossing quiet zone compliant. The city applied for a grant in May and is awaiting to see if it has been approved.

All other crossings have lights and signals – and will next need delineators or channelization put up to keep vehicles from attempting to go around gates.

The channelization safety equipment is upright, reflective devices and can be seen at Effingham’s Evergreen crossing. These safety measures at the crossings will cost the city $50,000 each, which provides another layer of safety in addition to gates and lights.

“We hope to get the materials bought this year and have our own crews install the delineators,” said Heuerman. “They look at the risk factors. By removing the horns, it becomes more risky, but by adding the delineators you can no longer go around gates, which adds an additional safety factor.”

“Even though the horn will be eliminated, we are implementing multiple other safety measures that will make the crossings safer than what they are today,” said Heuerman. “Horns will still be sounded in emergency cases if needed.”

Effingham city officials have been working with agencies such as the Federal Railroad Administration, Illinois Commerce Commission, Canadian National Railroad and the Illinois Department of Transportation for several years to become a quiet zone.

About 20 trains come through Effingham on the CN line per day. The same number comes through on the CSX line daily.

While there are less crossings on the CSX railroad, creating a quiet zone along that line would be more expensive and city official said will be revisited at a future time.

Mayor Mike Schutzbach said that safety for everyone is his biggest concern, but with the safeguards being put in place to make each crossing quiet zone compliant, it will be a positive for the community.

“With so many trains coming through, there are a lot of train horns,” said Schutzbach. “Once all of the added safeguards are put in, and the safety measures are all approved, it will be a good thing for Effingham.”

Commissioner Libby Moeller said she’s thankful that Effingham is the hub of transportation, whether it is for trains, trucks or planes, and said the feedback she’s received has been positive about quieting some train horns.

“Nobody has been against the quiet zones, from people I’ve talked to on the phone or in person,” said Moeller. “I think everyone who has reached out to me has lived along the proposed quiet zones. I have lived all my life in Effingham and always hear the trains, so I understand where residents are coming from.”

Commissioner Hank Stephens said he’s been trying to get up to speed on the project.

“I’m a big fan of it,” said Stephens. “I’ve asked the previous council about this and I’m realizing how challenging it can be. But, I’m hopeful we can do it. I’d like to minimize the noisy whistles when we can.”

Stephens also appreciates Heuerman for the tremendous amount of work he’s put into the project over the years.

“I think many of us have been interrupted by the noisy whistles. I’d like to minimize that, if we can,” he said.