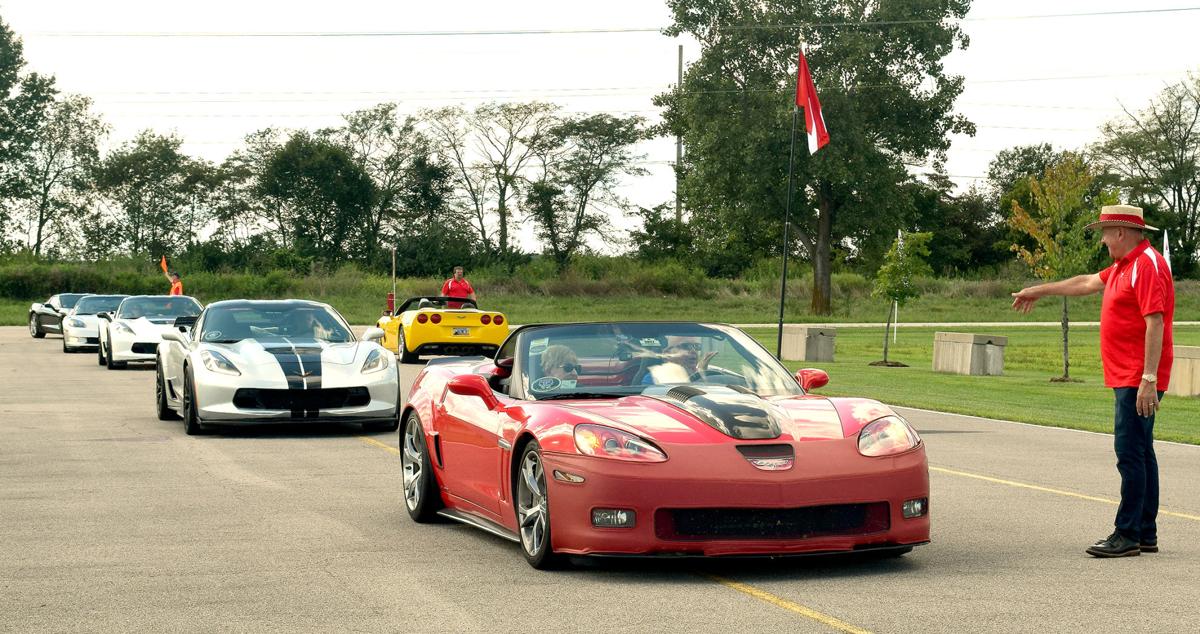 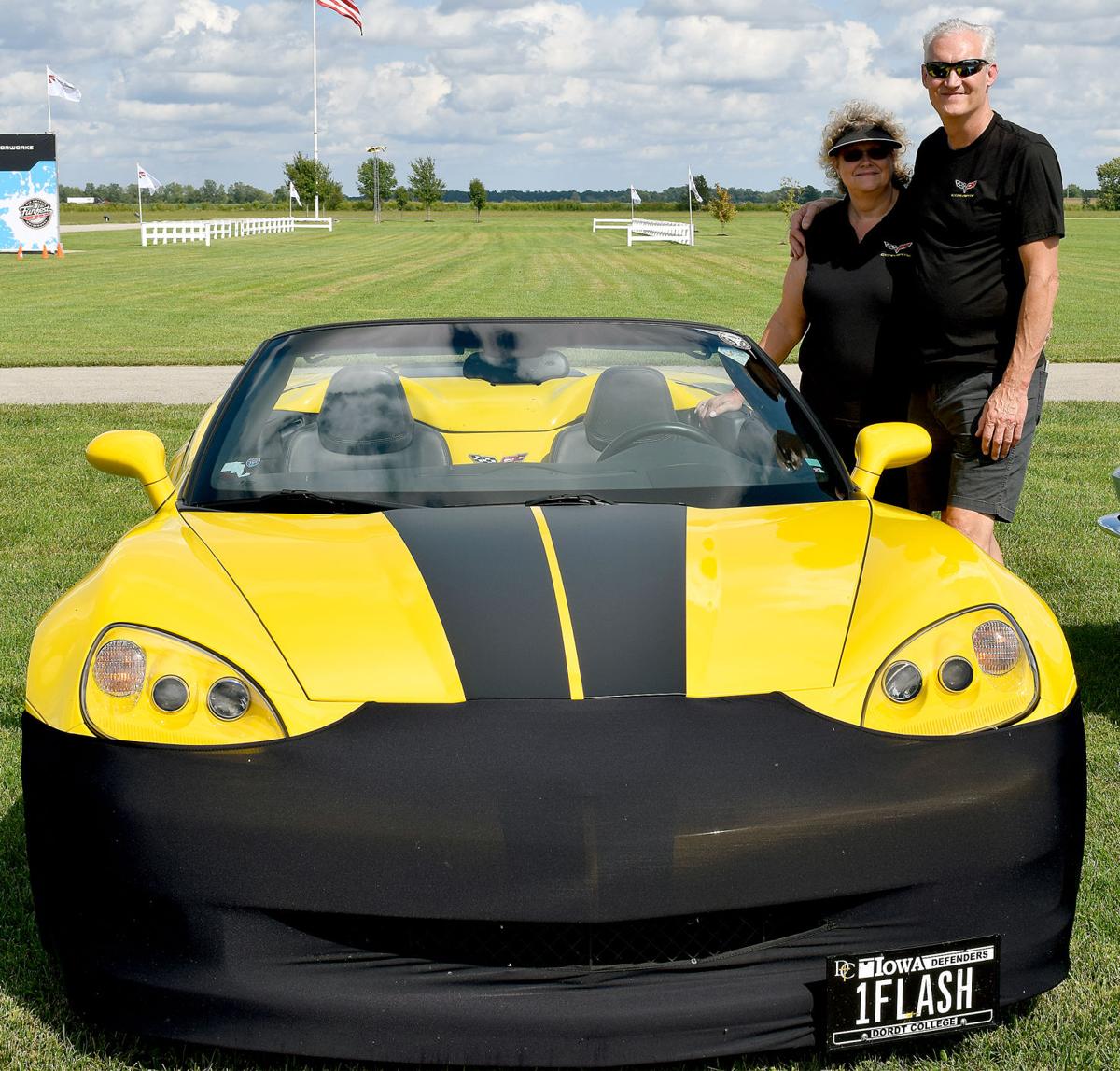 Steve and Kris Howard stand next to their 2013 Corvette Tuesday at Mid America Motorworks in Effingham. The couple stopped on their way to Kentucky for the National Corvette Museum’s 25th anniversary. 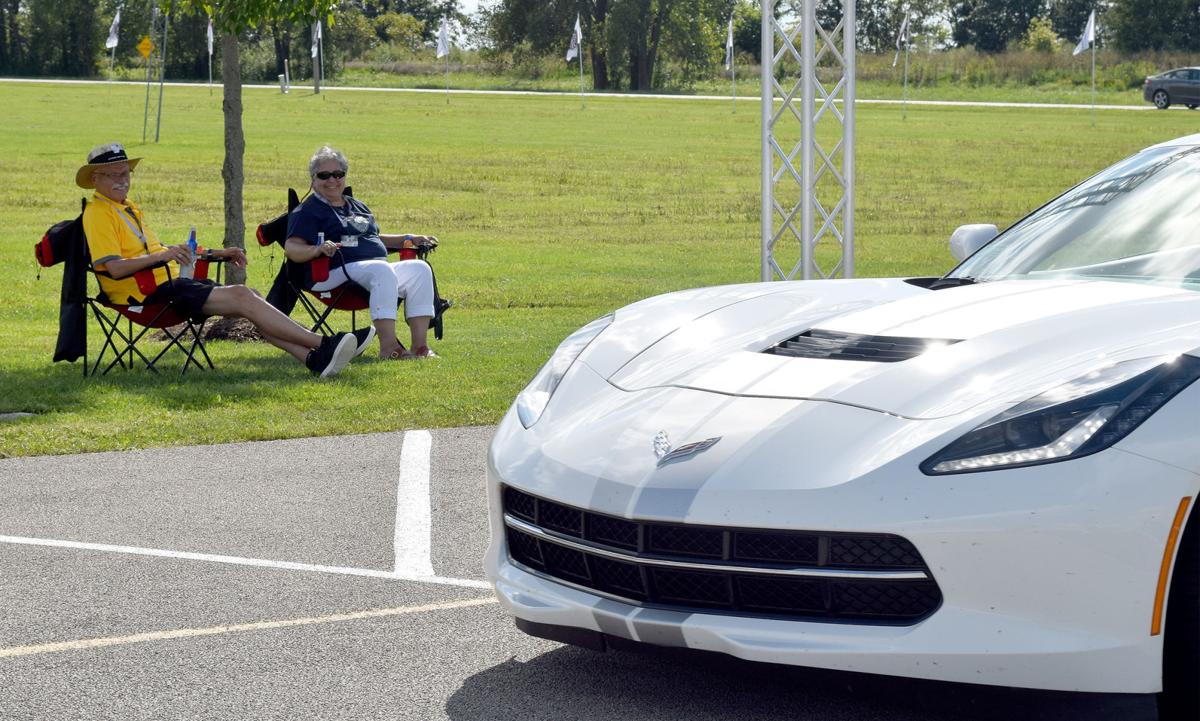 EFFINGHAM — A caravan of Corvettes of all makes and colors filled the campus of Mid America Motorworks in Effingham Tuesday as drivers made a stop on their way to the National Corvette Museum in Bowling Green, Kentucky.

The Corvette Caravan is part of the nationwide celebration of the national museum’s 25th birthday, which will be celebrated Aug. 28-31.

The Corvette enthusiasts are members of the north-central region of the caravan. The region covers central Canada, Iowa, Illinois, North Dakota, South Dakota, Wisconsin and Michigan and has 737 Corvettes in the group, making it one of the largest traveling to the national museum.

Steve and Kris Howard were traveling from Des Moines, Iowa, in their 2013 yellow Corvette. The two were tinkering with the retractable roof on their vehicle as Corvettes filled empty parking spaces near them.

The Howards said the yellow sports car was their first Corvette purchase. Tuesday was the couple’s first time at Mid America Motorworks.

“My brother had a ‘62 back in the day, so I’ve always liked Corvettes. We’re Chevy people,” said Kris.

Steve said yellow is his choice of color for cars, and every car he’s had in the past has been yellow. The couple said they added black stripes to the body of their Corvette using materials and decals sold through their business, KSH Design Studio LLC.

While getting to the National Corvette Museum is the main purpose for their trip, the couple is making stops at attractions along the way. Mid America was on that list of attractions.

“We are kind of just doing the caravan down there. We’re using it as kind of a springboard to go to places we haven’t been,” Steve said.

“This was another draw, to see this,” Kris added of Mid America Motorworks. “We had a gentleman in one of our clubs that had passed away and we bought a brick for him. We wanted to go down to the museum and make sure that we took a picture of his brick because nobody in our club’s been down there since they put it up.”

Mid America Motorworks Chief Cheerleader Mike Yager said over 1,200 cars are part of the nationwide caravan trip to the national museum. On Tuesday, Yager said he met people from as far away as France and as close as Illinois.

With over 45 years of experience in the world of Corvettes, Yager said Tuesday was an opportunity to see people he’s gotten to know over the years.

“The nice thing is that many, many of these folks are friends. It gives me a chance to interface with our customers, too,” Yager said. “We know from our campus to the city of Effingham, they’ll have a good experience here, and that’s important.”

Yager said caravan cruisers filled up available hotel rooms in Effingham and have even started filling rooms in Mattoon. The caravan will depart from Effingham at 9 a.m. Wednesday to make it to their final stop in Kentucky.

“Last year at this time, I was inducted into the National Corvette Museum Hall of Fame,” Yager said. “For the first 10 years of the museum’s existence, Mid America and the Yager family were the largest supporters of the museum, and we did that because our heart and soul is in Corvettes. Little did I ever think that a mere 25 years later, I’d be in the hall of fame there, so it’s kind of special having this group.”

Not only was the caravan stop an opportunity for Corvette enthusiasts to interact, it was also a chance for the drivers to give to a charity close to Yager’s heart. The Peoria-based St. Jude Corvette Drive was on hand at the event to raise money for St. Jude’s Children’s Research Hospital.

St. Jude Corvette Drive board member Andrew Black said the caravan event was the ideal opportunity for the satellite fundraiser to reach those across the country.

Drive founder Mike McCoy said St. Jude Drive’s relationship with Yager and Mid America Motorworks has been an important one for the foundation’s eight years in operation. Over those eight years, the foundation has raised $1.13 million.

As the first round of Corvette Caravan drivers settled in at Mid America Motorworks, another handful rolled into the campus as Yager greeted each driver. Steve and Sue Church of Lake Geneva, Wisconsin, watched as the rest of the 737 Corvettes made their way onto the campus.

“I sold two Fords in 1978 and bought my first Corvette, a ‘66. I had it for 31 years, and I sold it. I had to sell it because I needed the money,” Steve said. “I keep in contact with the gentleman who owns the car, and he’s promised to call me when he’s ready to sell.”

Like the Howards, the Churches were eager to make the stop in Effingham. The two have been to the Corvette Fun Fest five times over the years and have attended caravan events there as well.

Sue said there’s nothing quite like stopping at Mid America Motorworks for events like the one held Tuesday.

“When you’re here, you get to see every type of Corvette. You can’t go anywhere else to see all that,” Sue said.