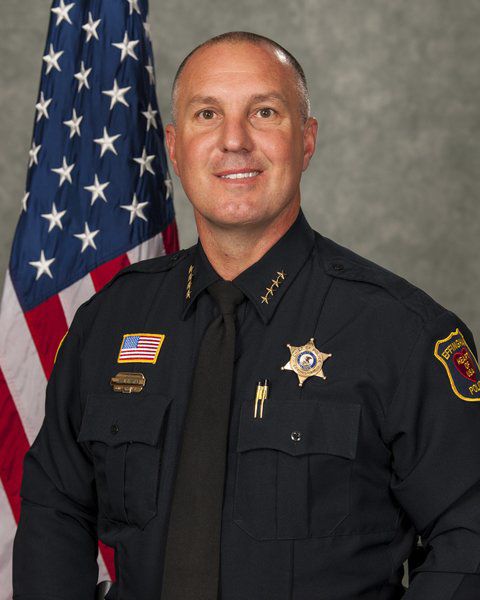 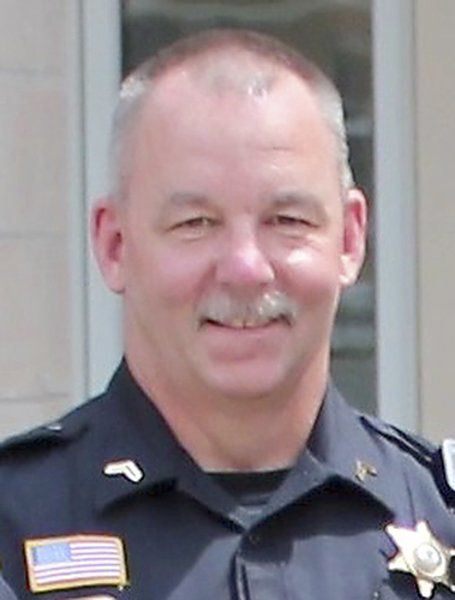 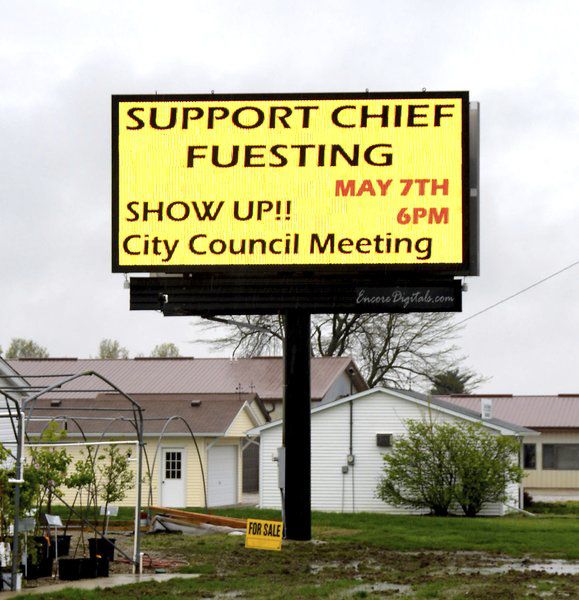 Charles MillsThe digital sign shown has appeared this past week along South Banker Street, next to Kiefer Landscaping in Effingham.

Charles MillsThe digital sign shown has appeared this past week along South Banker Street, next to Kiefer Landscaping in Effingham.

EFFINGHAM — A digital billboard along South Banker Street is displaying a message supporting Effingham Police Chief Jeff Fuesting, following rumors he may not be in the position much longer.

Zacha said the ad on the digital sign will remain lit until the meeting on May 7.

Fuesting said he’s had an outpouring of support from the community, as has his family.

Comments from commissioners during the April 16 Effingham City Council meeting made reference to rumors the chief may not be reappointed once the new mayor and council take office in May.

“Growing up in Effingham, I learned quickly how we as a community stick together,” said Fuesting. “I am proud that I have become a leader that this community believes in and one they will rally behind.”

Incoming Mayor Mike Schutzbach retired as police chief prior to the current chief being hired. Fuesting said he realizes he’s made some “adjustments” to the police department in his two or so years that were based on interviews, observations, and data collections of the employees.

“These are all changes that I am proud of helping to create and changes that the department needed to meet 21st Century policing standards,” said Fuesting. “It is my responsibility to ensure the safety of all who live, work and visit Effingham.”

Mayor Jeff Bloemker said the billboard is a significant showing of this community.

“It shows that justice and appropriate protocol and procedure are still the hallmark of the American way, especially here in Effingham,” said Bloemker. “People demand it.”

The mayor said he’s been in a position coming into office with concerns about an employee.

“I was in that position,” said Bloemker. “I expressed my concerns to the city staff and to the city council. I collected the aggregate feedback and acted accordingly. In every instance, I was counseled to allow for modification of behavior and give situation time to correct itself.”

Bloemker said it is not common practice to come in and make staff changes without a chance for correction by an employee.

“It is unprecedented in Effingham,” said Bloemker. “It is unhealthy. I could have entered my term as mayor and tried to promote my cousin to police chief, thus displacing Chief Schutzbach. But, I knew that was inappropriate behavior as an elected official and wrongful protocol.”

“Personnel matters are discussed behind closed doors for the employee’s benefit,” said Schutzbach. “I neither can or can’t make an appointment until I’m in office.”

Incoming commissioner, Hank Stephens, said in an email that it would be inappropriate to comment on any pending personnel matters.

“I have always tried to be accommodating to the media and it is my intention to do so once I have taken office,” said Stephens. “However, I am reluctant to do that before even taking office, and more importantly, before I have had a chance to do my homework.”

Incoming Commissioner Larry Micenheimer said the new council has been in communication to ensure a seamless transition in city government.

“Many issues were discussed (during a recent council-elect orientation), including the appointment of city officials,” said Micenheimer. “There has been and will continue to be a careful examination of the facts. There is no rush to judgement, but a responsibility to make good decisions.”

Current and incoming Commissioner Merv Gillenwater said he was aware of the billboard and also wanted to reserve any comments until the next term begins.

“I’ve always tried to support the mayor in office, but it doesn’t mean that I’ll agree all of the time,” said Gillenwater. “I feel the public expects us to support the mayor, but represent the city first. My vote on any topic will always have to be what I believe is best for the city.”

Bloemker will open the May 7 meeting and allow for closing comments from commissioners before turning it over to the new council. All but Gillenwater will be replaced.

Bloemker said citizens bring up the rumored issue frequently. He said people are disappointed in what they are hearing.

“The feedback I’m overwhelmingly getting is utter disbelief that political misbehavior of this nature could happen in Effingham,” said Bloemker. “They are disappointed that the incoming council would even consider such a thing. They think the incoming council should work with Chief Fuesting for at least one year before passing judgement.”

And as his term comes to a close, Bloemker said he’s staying on track.

“As for me, I’m still the mayor and I still have a job to do,” said Bloemker. “The city has issues and needs that present themselves to me daily. So, I haven’t yet been able to fully appreciate the weight I am about to jettison.”

Fuesting said he’s reached out to Schutzbach recently, but his attempt went “unheeded.”

EFFINGHAM – After 28 years in law enforcement, Deputy Chief Danny Lake announced he will retire from the Effingham Police Department the day before the new council takes office.

The announcement falls on the heels of controversy from commissioners’ comments made April 16 that Effingham Police Chief Jeff Fuesting may not be reappointed by the incoming mayor, Mike Schutzbach.

Lake plans to retire on May 6. He wouldn’t say if the possibility of Fuesting leaving prompted his decision. However, he did say he decided about a week ago to retire.

Fuesting will present Lake with a Chief’s Commendation in appreciation for his decades-long service to Effingham. Effingham residents are encouraged to stop by the police department at 1 p.m. May 3 for the presentation and to show appreciation to Lake’s service.

“Deputy Chief Lake has been an invaluable member of this administration and we will truly miss his work ethic and support,” said Fuesting. “The department is losing a dedicated and talented police officer and leader.”

Lake has had duties, including narcotics detective, K-9 handler, K-9 coordinator, assistant shift commander and shift commander. He is also a distinguished military veteran having served as a staff sergeant in the U.S. Air Force Pararescue Team from 1982 to 1991, before becoming a police officer.

He will spend his retirement getting projects done at home for starters.

Lake said working with Fuesting “was awesome.” He gave the chief of police high marks for his morals and work ethic. He added that if Fuesting moves on from Effingham, the next city will be impressed by his work.

“We spent many hours at the police department and at events downtown,” said Lake. “I have never worked with anyone with the morals and work ethic as high as his. He always made sure everything ran smoothly and that we were held to the highest standards.”

Lake added that Fuesting is “all the way around impressive.”

“There’s no way to discredit him,” he said.