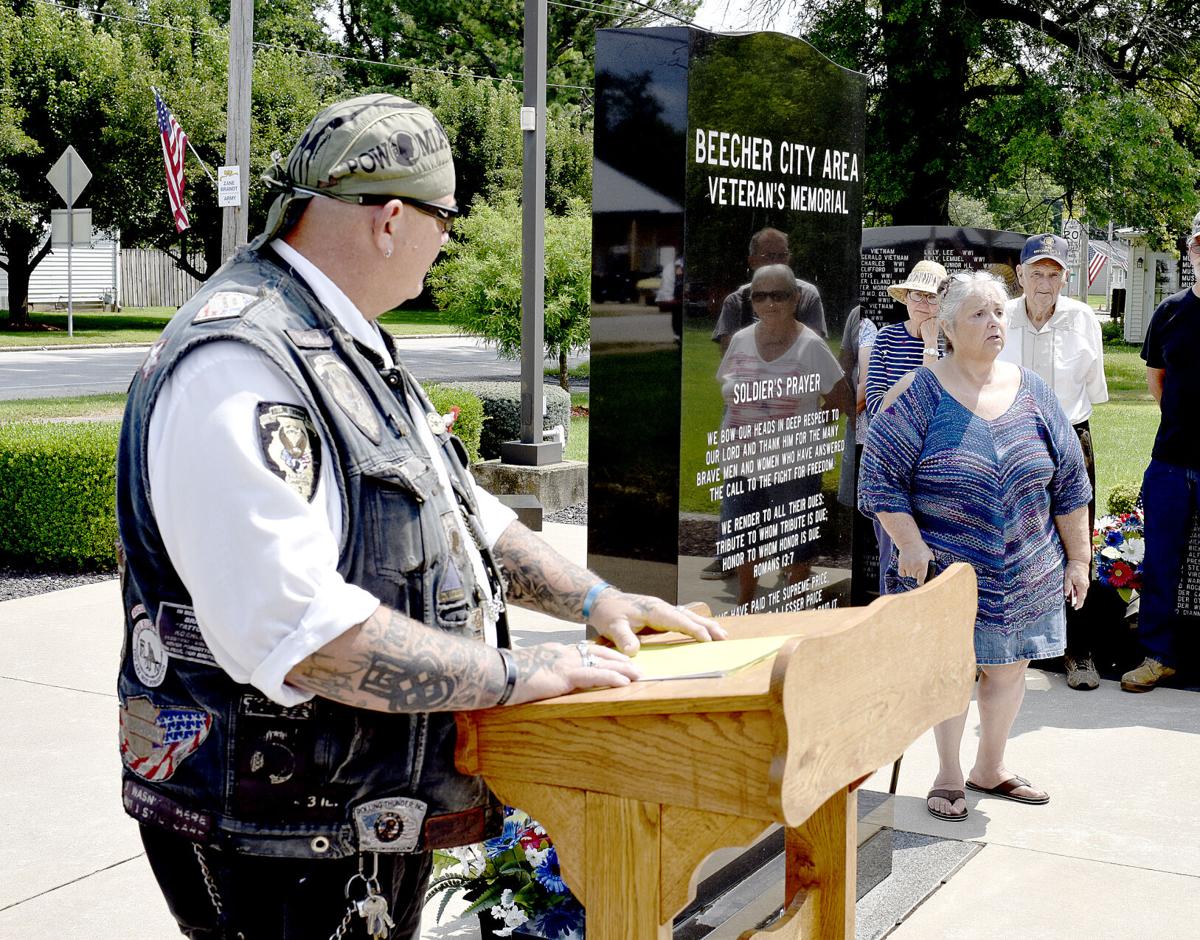 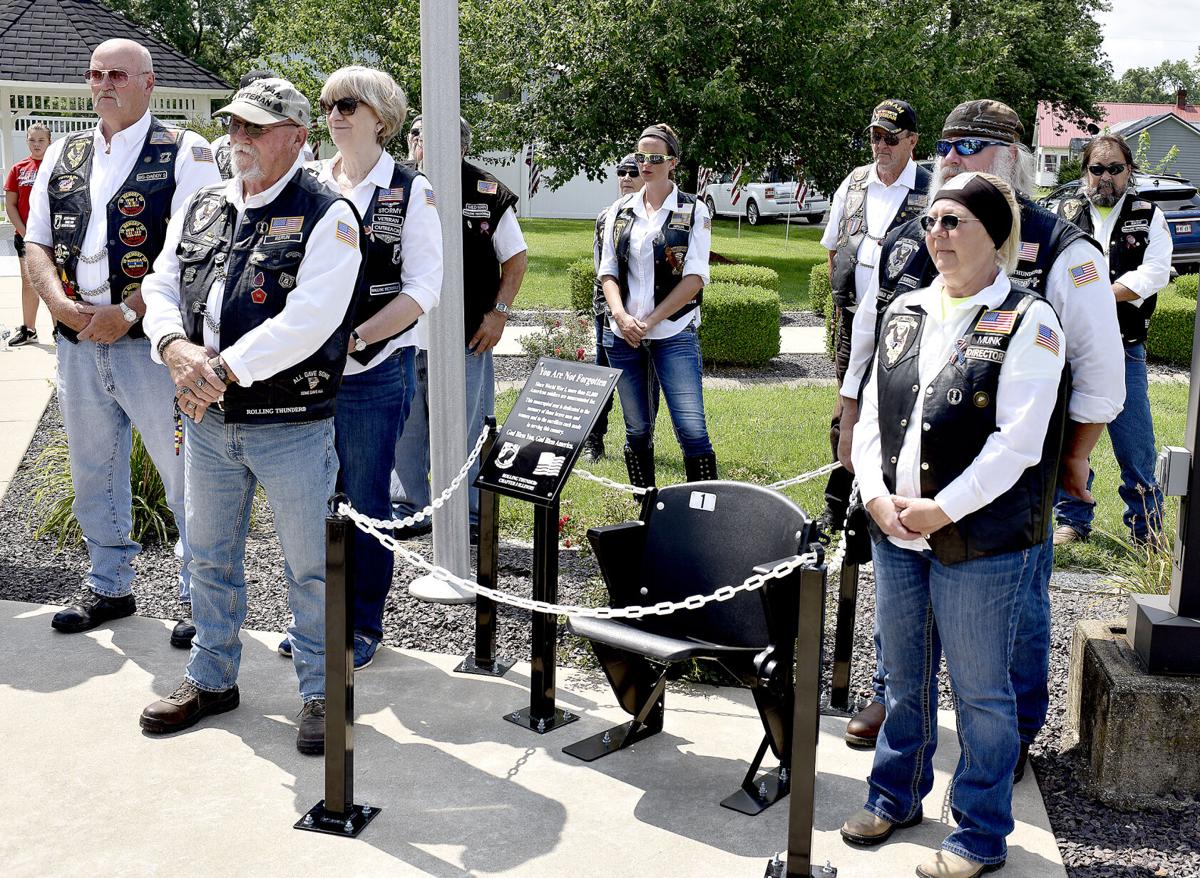 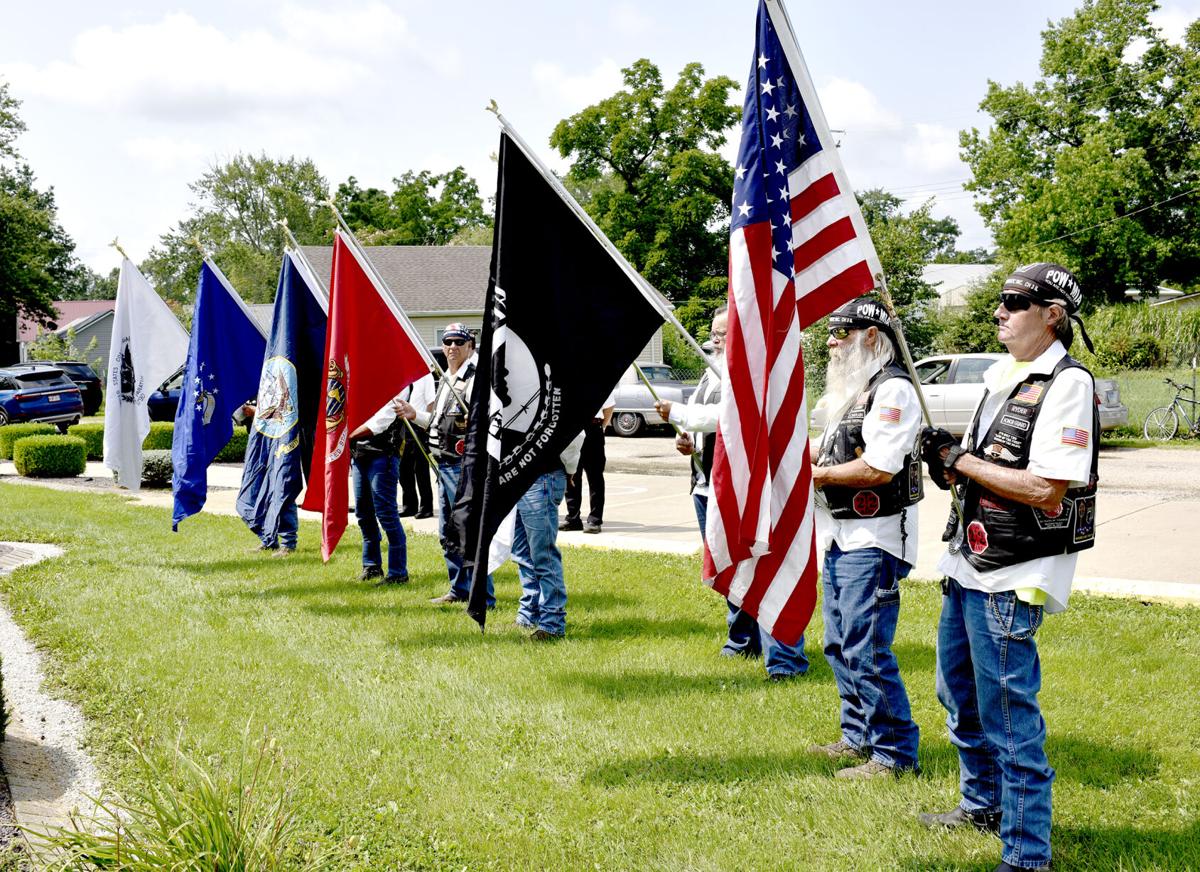 A color guard made up of members of the Rolling Thunder Chapter Three Illinois organization displayed the U.S. Flag and flags from all branches of military service. 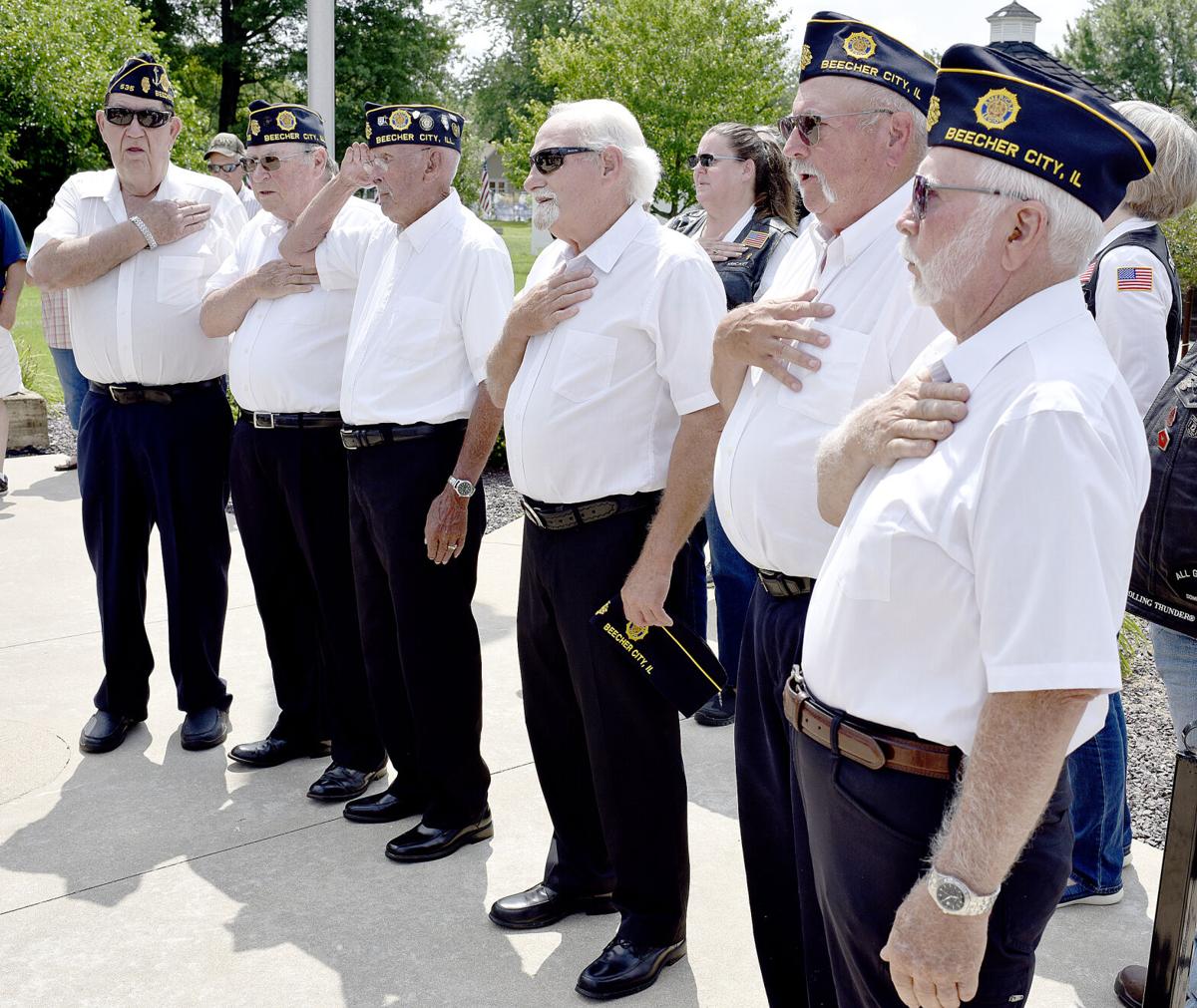 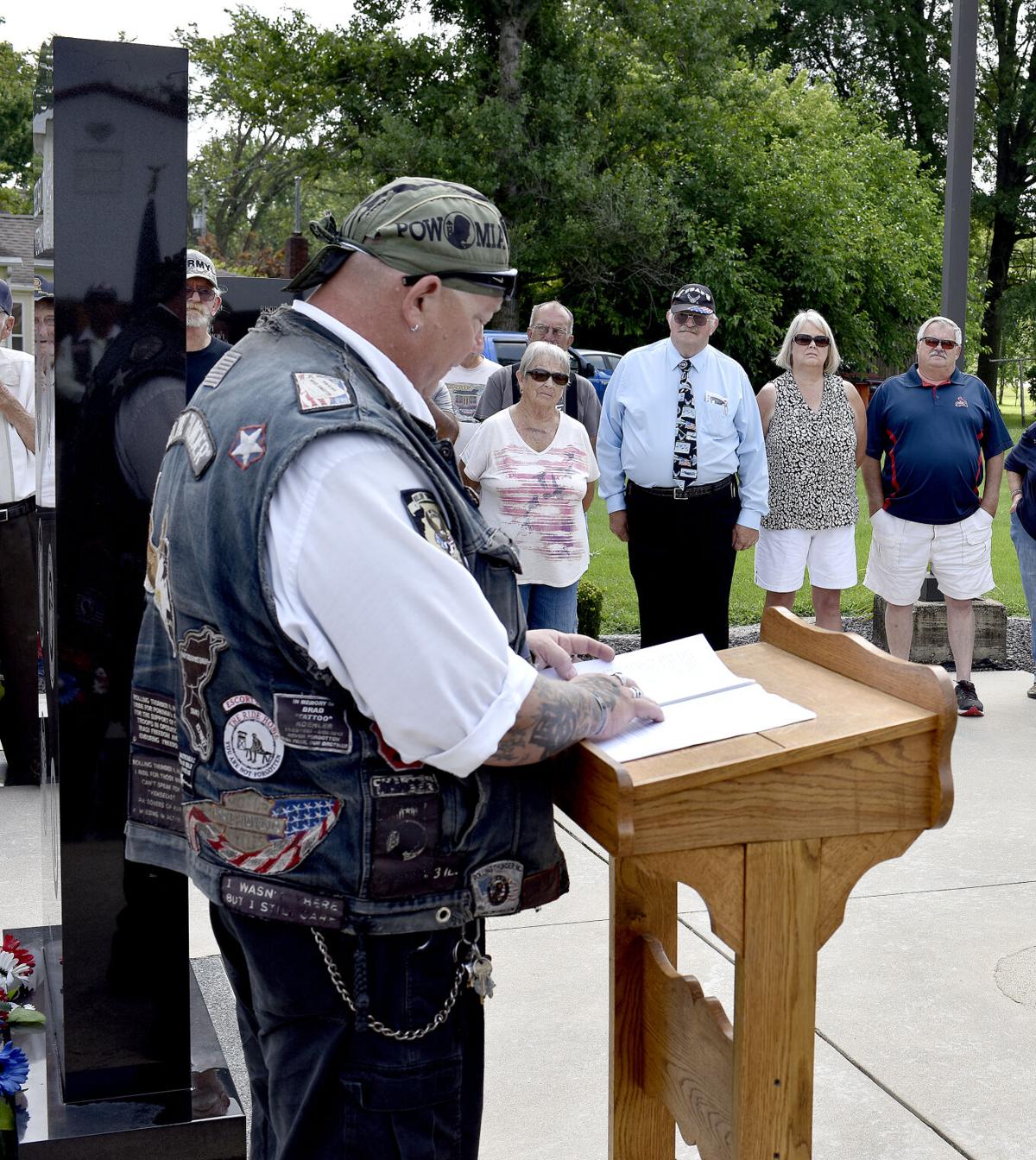 A color guard made up of members of the Rolling Thunder Chapter Three Illinois organization displayed the U.S. Flag and flags from all branches of military service.

BEECHER CITY — Dry weather and a clear sky set the stage for a special ceremony in Beecher City Saturday.

Members of the Rolling Thunder organization rolled into town to dedicate a Chair of Honor they placed at the Beecher City Area Veterans Memorial. The chair honors prisoners of war and missing in action.

“We are a diverse group of like-minded individuals with 90 chapters across the United States committed to the POW/MIA and veterans rights issues,” Schmidt said.

Rolling Thunder’s membership is made of males and females, veterans, non-veterans, bikers and non-bikers. He said even though many members are veterans and ride motorcycles, neither of those are a prerequisite for becoming a member of Rolling Thunder.

“Please make no mistake about it, Rolling Thunder never has been nor ever will be a motorcycle club,” Schmidt said.

Rolling Thunder is a nonprofit organization.

“We all volunteer our time and effort because we believe in our mission. And that mission is to publicize POW and MIA issues. We’re here to educate the public to the fact many American prisoners of war and missing in action were left behind from all past wars,” he said.

Rolling Thunder has a goal of correcting the past and to protect future veterans from being left behind, he said.

“That is why we ride, drive, walk, stand, sit and speak for those who do not have a voice of their own,” Schmidt said. “It allows us to tell our POWs and MIAs you’re not forgotten.”

Among several Rolling Thunder activities is the POW/MIA Chair of Honor Program.

“The POW/MIA Chair of Honor Program is where we provide a Chair of Honor to local veterans organizations or towns who wish to have one that can be placed out for all to see,” Schmidt said.

There was a moment of silence when members of Rolling Thunder Chapter Three Illinois unveiled the newly installed Chair of Honor.

Chapter Three members brought their own color guard with flags representing all of the branches of military service. Also, members of Eva Casstevens American Legion Post 535 of Beecher City made a salute to the new memorial and lined up in front of the Chair of Honor to recite the Pledge of Allegiance.

Schmidt recognized many of the POW/MIAs from Effingham County.

“One can only imagine what these heroes endured as a prisoner of war or while missing in action. Only the God in Heaven knows for certain of their demise,” he said.

He also mentioned the namesake for the Beecher City American Legion post who was neither a POW or MIA. She was killed in action during World War I.

“Geneva E. Casstevens was a nurse deployed to a military hospital in Knotty Ash near Liverpool, England,” Schmidt said.

“It was a rainy day three months ago when someone knocked on my door I didn’t even know,” Felty said. “They took the time to pull into my driveway and ask about this memorial.”

Felty said they asked if they could place a Chair of Honor in the Beecher City Area Veterans Memorial.

“I got the information from him and I turned it over to our American Legion who got in contact with Rolling Thunder,” Felty said.

“I just want to say from the Village of Beecher City, thank you,” she added.

Beecher City was the 49th Chair of Honor Chapter Three, which has 129 members, has placed in Illinois since it started the chair program eight years ago. The chapter has their regular meetings at the Olney VFW.

Toldeo native and Rolling Thunder Chapter Three Illinois member Marlene Van Matre of Mahomet helped research the history of POW/MIA in Effingham County. She said quite a few things stood out in her research.

“It was amazing some of the things I found out like how proficient they were in such a short period of time to get things done in World War II. But, we lost so many lives after they completed their bombing missions. Many flying back to refuel never made it back and had to ditch in the ocean just because they didn’t have enough fuel on board,” she said.