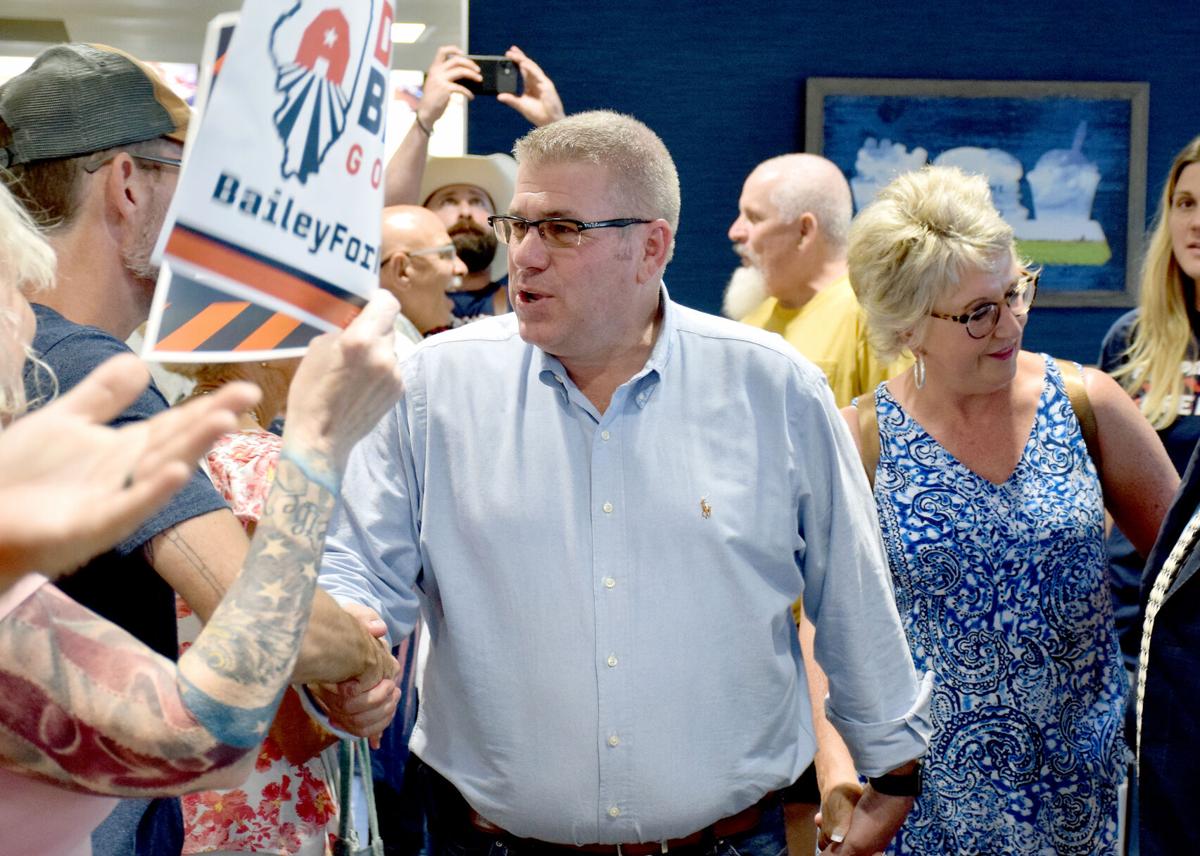 Bailey greets the crowd as he walks into Culver’s in Effingham on Wednesday for a campaign event. 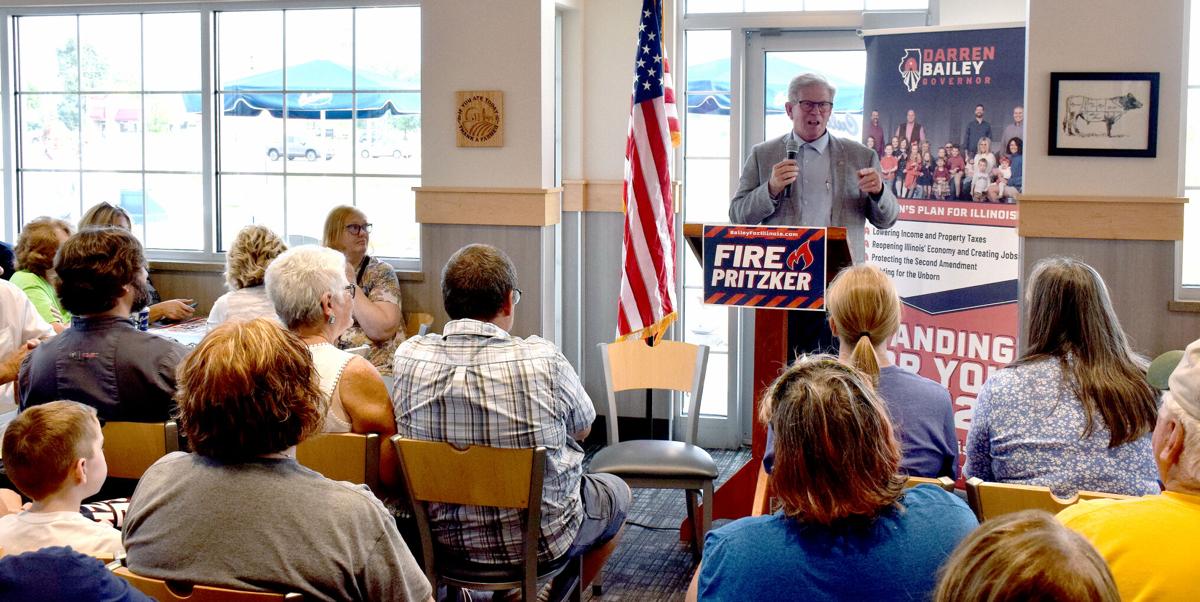 A crowd listens to State Rep. Chris Miller, R-Oakland, at a campaign event for Darren Bailey’s run for governor. 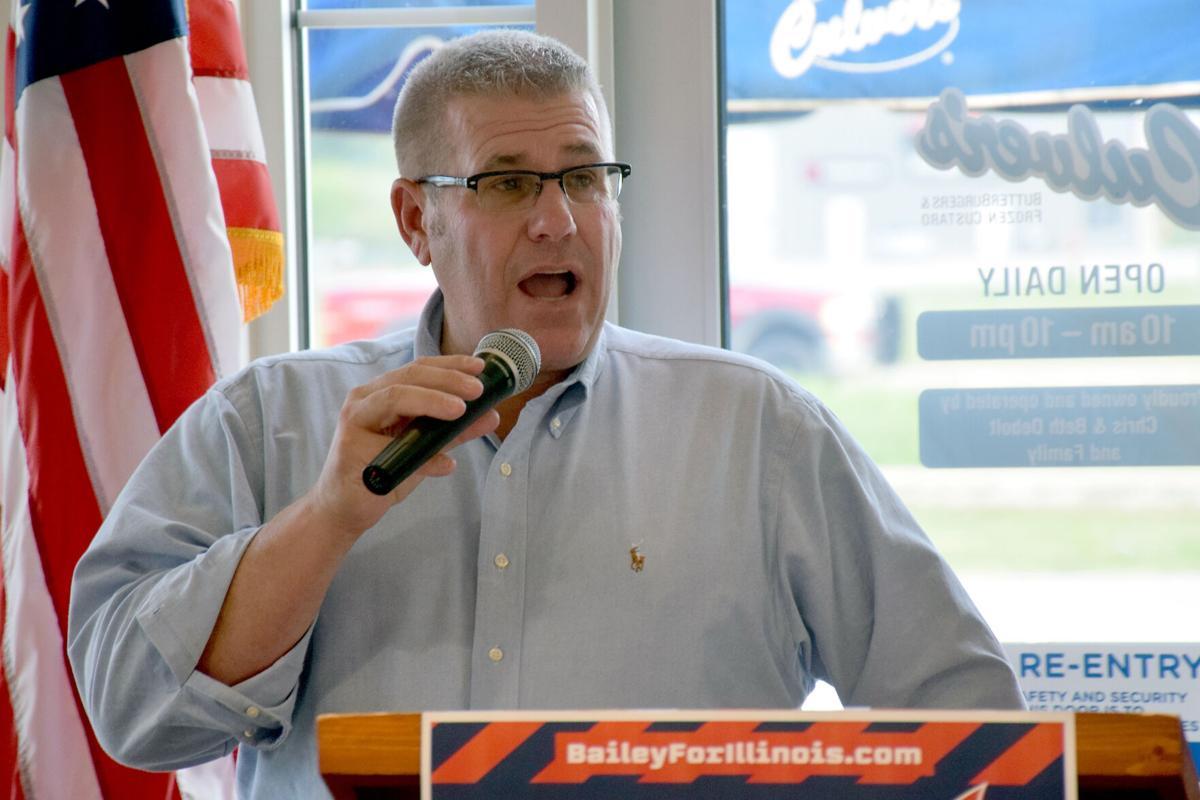 Darren Bailey speaks to the crowd from his podium at the Effingham Culver’s on Wednesday. 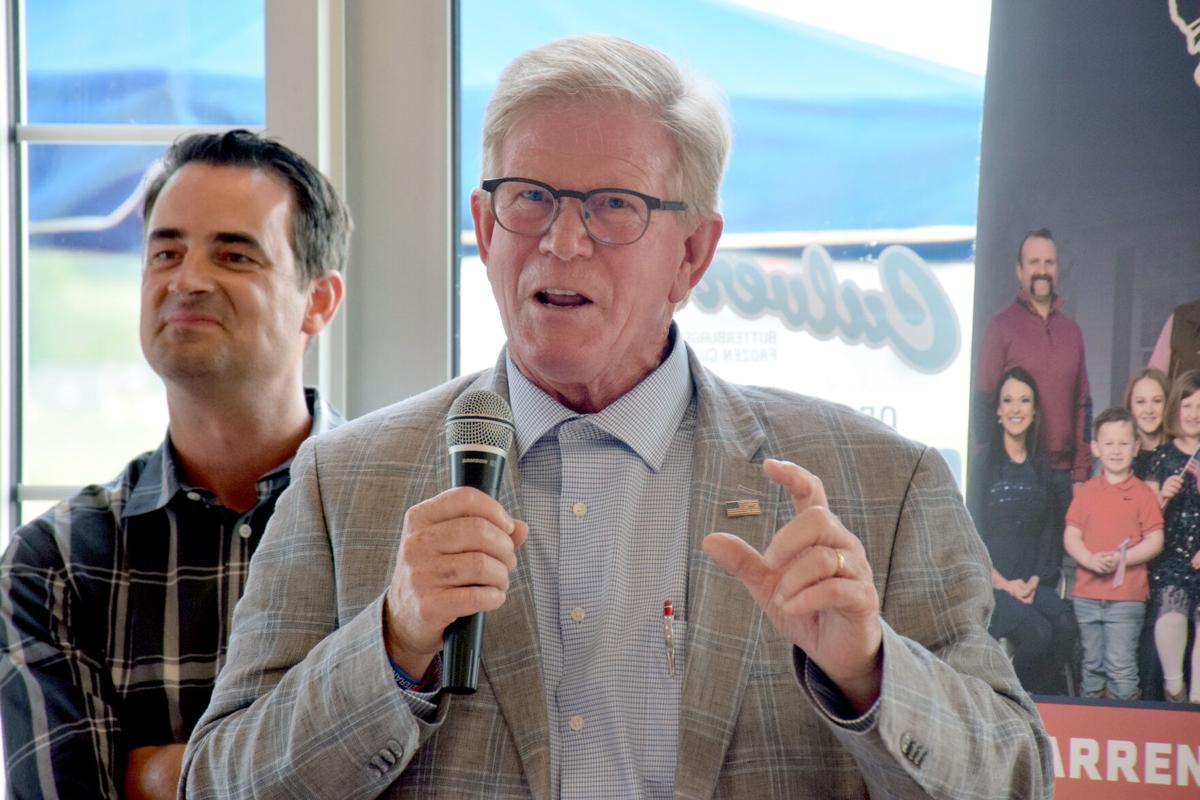 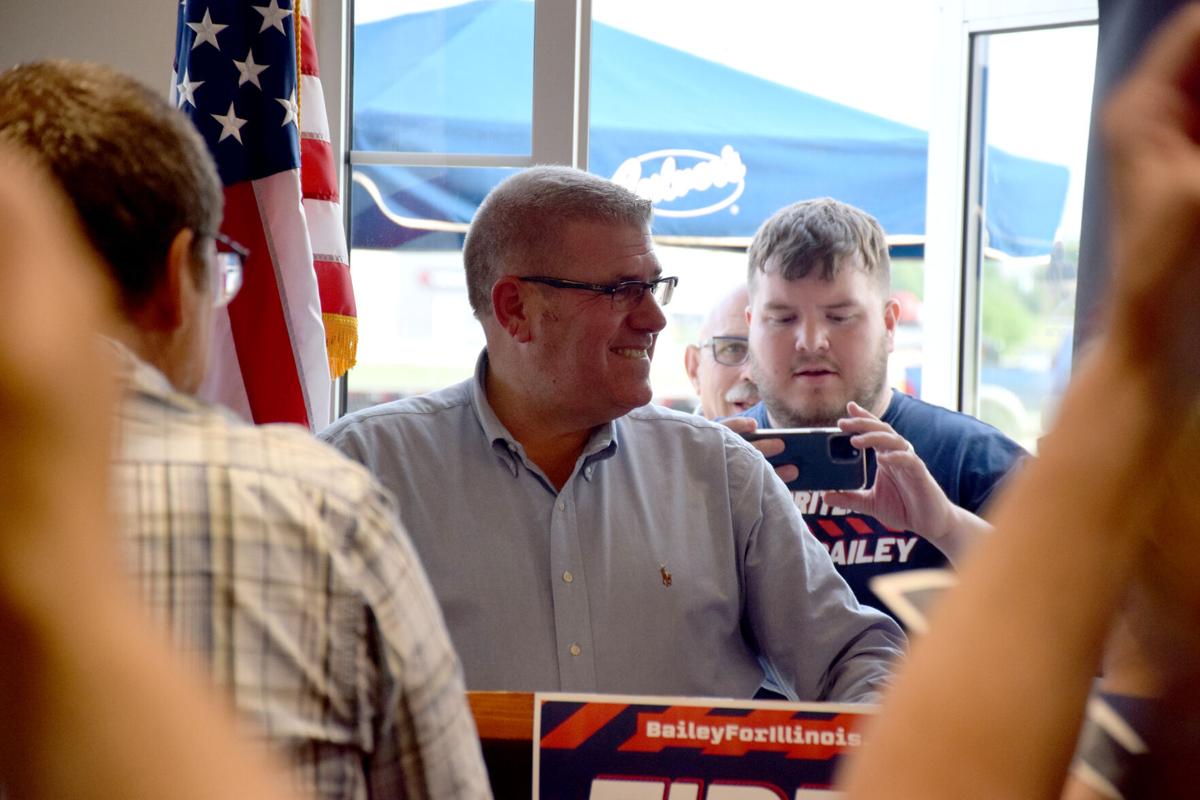 After he finished his speech, the crowd at the Effingham Culver’s gave Darren Bailey a standing ovation.

Bailey greets the crowd as he walks into Culver’s in Effingham on Wednesday for a campaign event.

A crowd listens to State Rep. Chris Miller, R-Oakland, at a campaign event for Darren Bailey’s run for governor.

Darren Bailey speaks to the crowd from his podium at the Effingham Culver’s on Wednesday.

After he finished his speech, the crowd at the Effingham Culver’s gave Darren Bailey a standing ovation.

EFFINGHAM — State Sen. Darren Bailey, R-Louisville, attracts supporters through his personality almost as much as through his platform.

Bailey, who is running for governor, made a campaign stop at the Culver’s in Effingham on Wednesday. More than 100 people crammed into the restaurant to hear him speak.

Curt Johnson joined dozens of others outside after the event to shake Bailey’s hand and get a photo.

“I was moving to Tennessee a year and a half ago,” said Curt Johnson.

Johnson said a conversation with Bailey about the candidate’s vision for the state convinced him to stay in Illinois.

Debbie Hayes, another supporter, said that she’s going to vote for Bailey despite being a Democrat.

“People are leaving Illinois because of taxes. Everything is so dang high,” she said. “People are flocking elsewhere.”

Hayes, who is dating a campaign bodyguard, joked that she’s the first Democrat to set foot on Bailey’s campaign bus.

“We need to stay here and fight and keep Illinois a livable place for everyone,” she said. “Bring those taxes down. Times are tough. We’ve been through COVID and we do not need any more stress.”

In his speech to the crowd, Bailey stuck to many of the same points he outlined when he launched his campaign in February at the Thelma Keller Convention Center in Effingham, including one of his primary campaign slogans:

Signs with “Fire Pritzker” on them were passed out to attendees and campaign staff wore “Fire Pritzker” shirts, signalling that Bailey is more focused on the general election than on his primary opponents.

“I feel confident that we’re going to be able to stay ahead of the current crowd and anyone who enters,” he said in a follow-up interview.

Bailey offered particular policy proposals, such as a reform to the Illinois budgeting system.

Zero-based budgeting is a method of budgeting that has been used in the public and private sectors in which each expense must be justified and approved, starting from a theoretical budget of zero dollars.

“I support eliminating the FOID cards,” Bailey said. “They serve absolutely no purpose.”

Bailey encouraged his supporters to get out and vote, lamenting the roughly 78% turnout rate in Effingham County for the 2020 general election and lower turnouts in other areas he’s visited. He also spoke about training people to become involved in elections.

“We’re going to be training people to be poll watchers and election judges. That is the constitutional process that we uphold” he said. “We take care of the problem in real time. We don’t talk about having election fraud and then wait eight months later and wonder how the election went.”

Not everyone who spoke at the event shared Bailey’s tempered response to the idea of election fraud.

Joe Biden won the election, earning 51.3% of the popular vote to Trump’s 46.9% and earning 306 electoral college votes to Trump’s 232, according to the Federal Election Commission. There has been no credible evidence in the months since the election of widespread fraud or irregularities that would cast doubt on those results.

Both Bailey and Miller signed a letter to Congressional Rep. Mary Miller calling on her to object to certifying the election results on Jan. 6. State Rep. Blaine Wilhour, R-Beecher City, another speaker at Wednesday’s event, also signed that letter.

Miller also addressed the state’s relationship to energy production, pointing out the state’s large coal reserves. Illinois has the second largest coal reserves in the nation, behind only Montana, according to the U.S. Energy Information Administration.

“We do not have a climate crisis! I don’t care how many times you hear that,” said Miller. “We have an energy crisis and we have a crisis of common sense.”

However, Bailey said he would support research into new technologies, but expressed fears about reliance on renewable energy.

“The battery capacity and technology to harness the power for windmills and solar panels is crude at best right now,” said Bailey in a follow-up interview. “Let’s take our time and ease into this.”

Bailey also cited concerns with a proposed energy bill that stalled in the statehouse during the most recent legislative session that would have shut down all coal plants in the state by 2035 and natural-gas plants by 2045.

Bailey made a name for himself challenging the state’s COVID mitigations in court and refusing to wear a mask during the legislative session in spring 2020. Despite this, he didn’t discuss the pandemic and did not take questions on the subject.

He did release a written statement Wednesday regarding vaccination.

“Senator Bailey’s stance on vaccines has been clear that the decision is between a patient and their doctor,” the statement said. “Individuals can and should make these decisions without government or big media coercion.”

Bailey also said in the statement he would not “unilaterally lock down our economy, force top-down mandates and destroy our economy and state.”

The statement comes after Chicago’s WGN reported that Bailey’s brother-in-law is hospitalized with a COVID-related illness. Though he refrained from discussing details of the situation, Bailey asked for prayers in his statement.