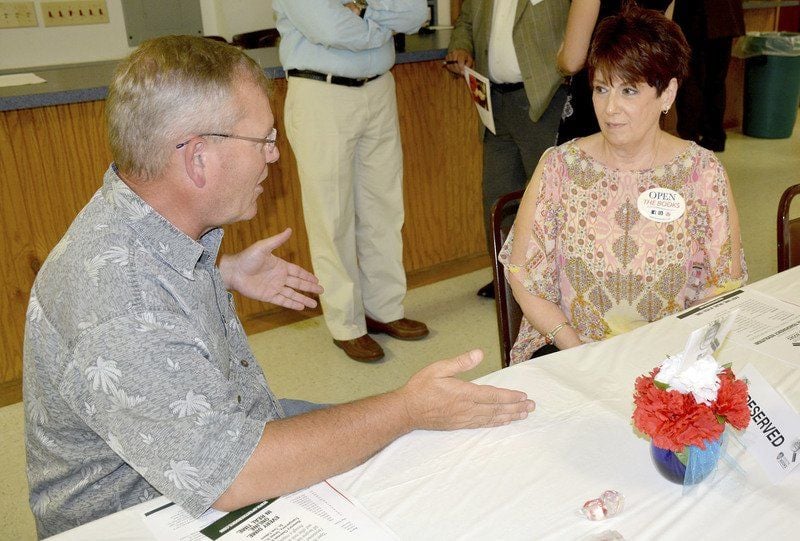 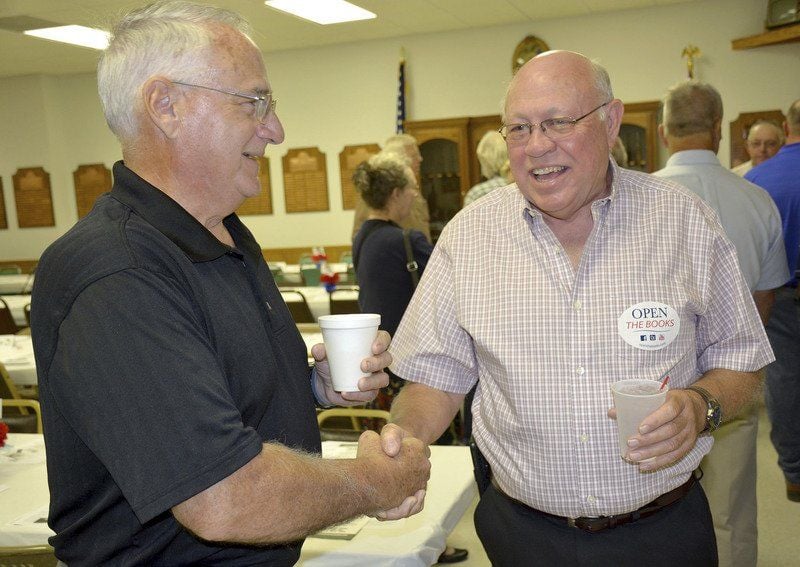 Bill Grimes photosOld schoolmates Carl Miller, Neoga Class of 1966, left, and Phil Toops, NHS Class of ‘64, greet one another during the social hour for the fifth annual Transparency Revolution banquet at the Effingham VFW. Miller received a Courage Award at the event.

Bill Grimes photosOld schoolmates Carl Miller, Neoga Class of 1966, left, and Phil Toops, NHS Class of ‘64, greet one another during the social hour for the fifth annual Transparency Revolution banquet at the Effingham VFW. Miller received a Courage Award at the event.

A number of people with local ties received Illinois Courage Awards Thursday for their impact on the government transparency movement.

Miller, who lives in Shelbyville but farms east of Neoga, spearheaded the successful effort against a proposed referendum that would have given Neoga schools $800,000 from their taxpayers.

“We did what had to be done,” he said. “We started out as a group that wanted data about the referendum.

“As time went on, we found out that none of the administrative costs were being reduced even though enrollment was dropping by 15 students a year.”

County Board Chairman Jim Niemann said he’s proud of what the board has done to cut costs within county government over the past several years — and is glad the board is being recognized.

“I’m flattered that someone is recognizing the board for what we would consider routine business,” the chairman said.

Willenborg, who ran for the Unit 40 board earlier this year on a platform of cost-cutting, said she was surprised to receive the courage award.

“Then again, I was surprised I got elected to the school board,” she said. “There’s a lot of people who deserved this award as much as I did.”

Petty and McCarter were not at Thursday’s event. Andrzejewski said McCarter was in Kenya bolstering security to a Christian school he supports in that East African nation.

Andrzejewski said it was important to recognize fellow travelers in the fight against governmental misbehavior.

“Our No. 1 manufactured product in Illinois is corruption,” he said. “Courage Awards recognize those citizens, journalists, elected officials and watchdogs who have simply stood strong for what’s right, fair and just.”