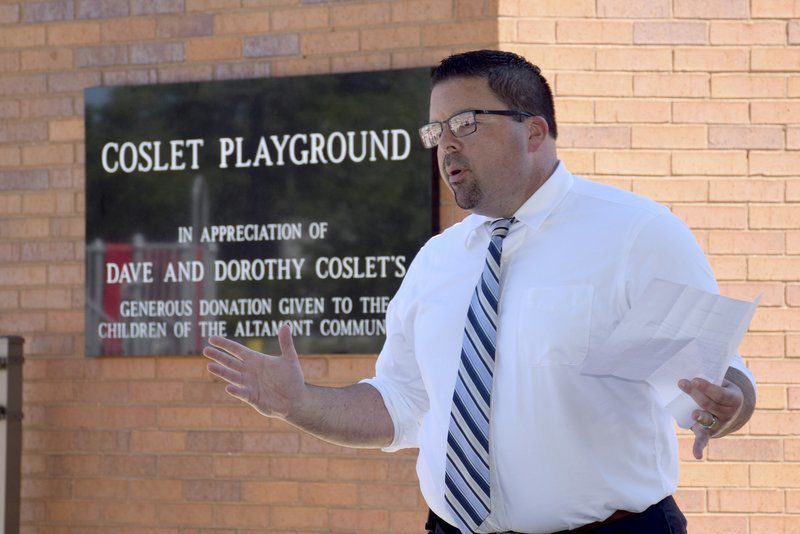 Altamont Board of Education Member Alan Shumaker, left, receives a hand-out from Illinois Association of School Boards (IASB) Consultant of Executive Searches James Helton. The Altamont Board of Education approved hiring IASB to facilitate a search for a Superintendent of Schools for Unit 10 with the goal of having someone in place by July 1, 2021.

Altamont Board of Education Member Alan Shumaker, left, receives a hand-out from Illinois Association of School Boards (IASB) Consultant of Executive Searches James Helton. The Altamont Board of Education approved hiring IASB to facilitate a search for a Superintendent of Schools for Unit 10 with the goal of having someone in place by July 1, 2021.

The Altamont Unit 10 school board this week decided not to renew the contract of Superintendent Steve Mayerhofer when it expires next summer.

The board hired the Illinois Association of School Boards to search for his replacement. The new superintendent is expected to begin July 1.

The decision came during a special meeting on Monday. Mayerhofer, who is in the midst of a three-year contract, did not attend.

Before deciding to hire IASB for the new superintendent search, IASB Consultant of Executive Searches James Helton presented the board with an overview of how it works. Helton, a Stewardson-Stasburg area native, received his first administrator position as assistant principal for the Altamont Junior High, which he did for a year before moving to Robinson as school principal. That led him to Waterloo, where he was superintendent for nine years. After retiring from his position in Waterloo six years ago, he became a consultant for IASB.

“I would be your face, running the search,” he told the board. “And I would be communicating with the board with establishing a timeline if you should decide to use our services.”

Helton said a posting of the superintendent opening would appear on both the IASB and Illinois Association of School Administrators (IASA) websites. From Oct. 26 through Nov. 5, staff, parents, board member and community surveys would be available online. Helton said surveys from the various groups together would give IASB an idea of Altamont’s ideal superintendent candidate.

He said he could potentially come back to the Nov. 9 board meeting to make future plans, finalize the timeline, receive guidance on an appropriate compensation package and to provide criteria collected from surveys to create an ideal candidate profile. At that time, Helton proposes the board would be ready for a comprehensive announcement updating both the IASB and IASA website postings.

“As you can see we can get the ball rolling rather quickly,” Helton said.

Helton said they were seeing fewer applicants due to the COVID-19 pandemic.

“Because right now people are staying where they are potentially unless it’s the right job,” Helton said.

“For the right position, I think we’re going to get some good applicants. Then it’s our job to go through the applicants and make sure we don’t present to you something that isn’t what you’re looking for.”

Helton said the final candidates will screened by a IASB committee rather than just one person.

He said IASB would gather all of the applications and verify their qualifications and references then present to the board their final candidates.

“We won’t promote someone for an interview if they are not certified or ready to take the job,” Helton said.

Helton said there would be an initial and second interviews by the board and hopes to be in a position to have board negotiations, a contract offer and new superintendent by February of next to start their contract on July 1.

He told the board a full search for a superintendent would be $6,400 dollars with an optional $1,500 interview option that can be added at a later date. Legal fees would during contract negotiations would be the responsibility of the school district.

After closed session, the board came back with the decision to hire IASB for the search.

Contacted on Tuesday, Mayerhofer said he wanted to review the minutes of the meeting before discussing the board’s decision.