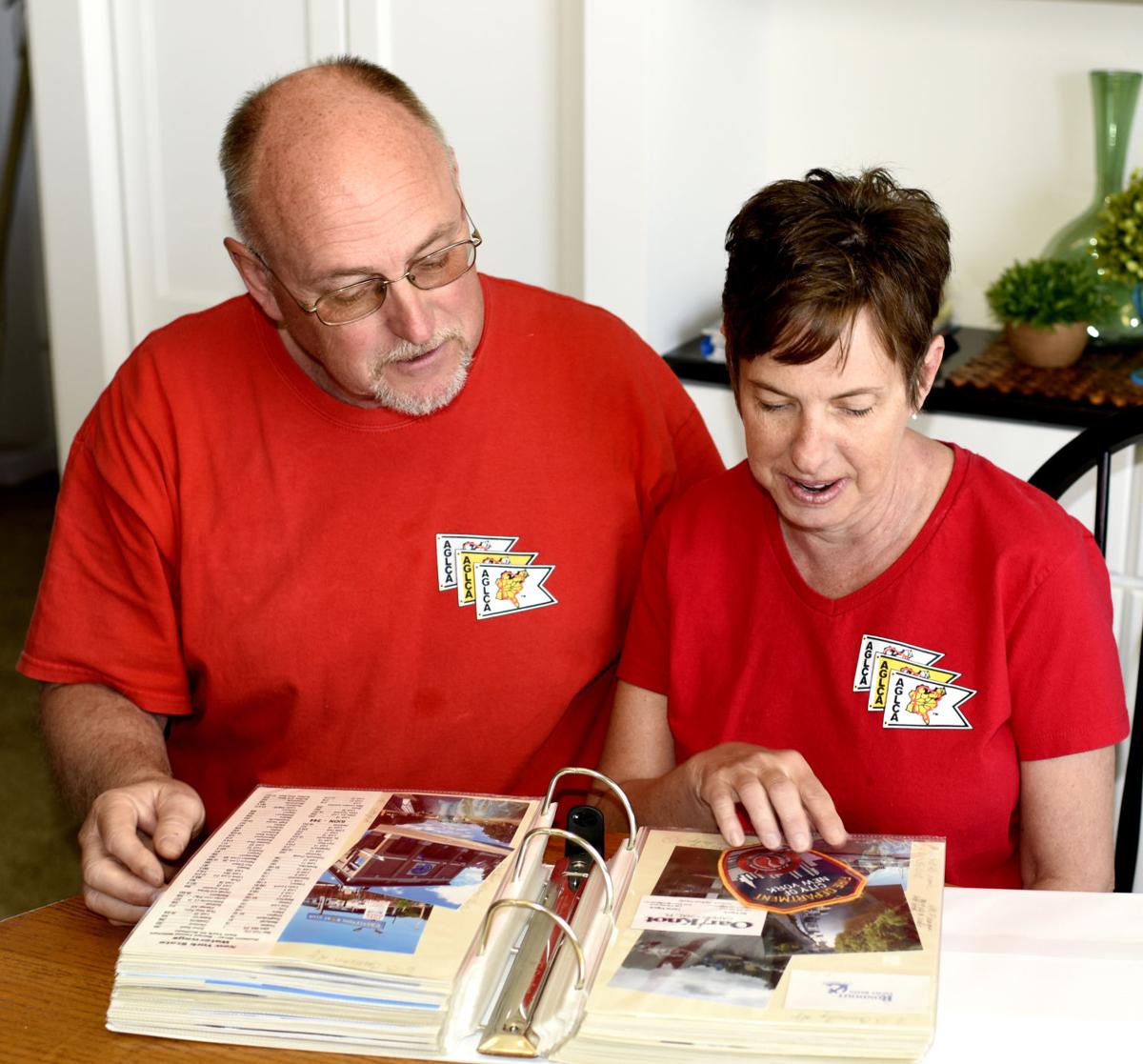 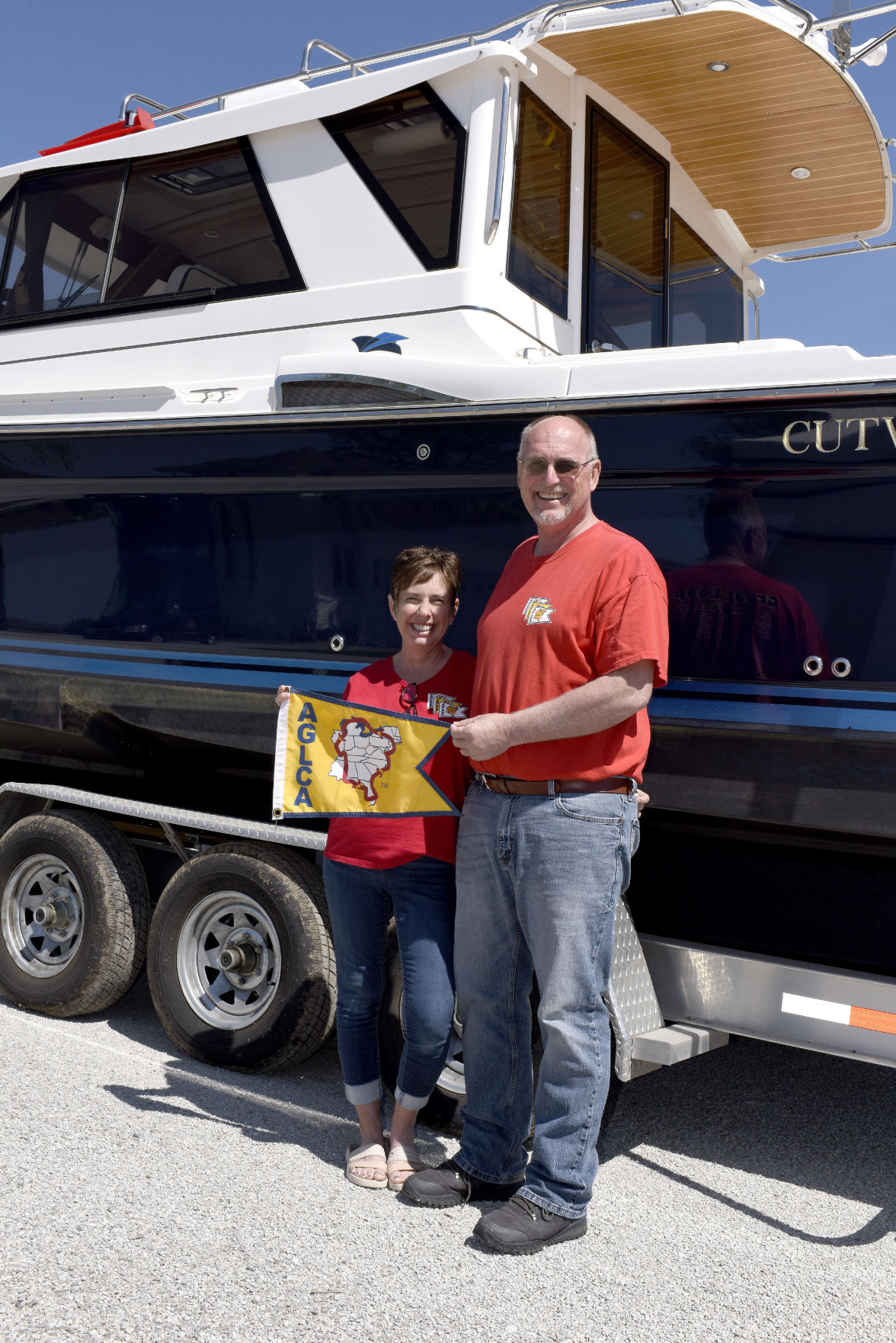 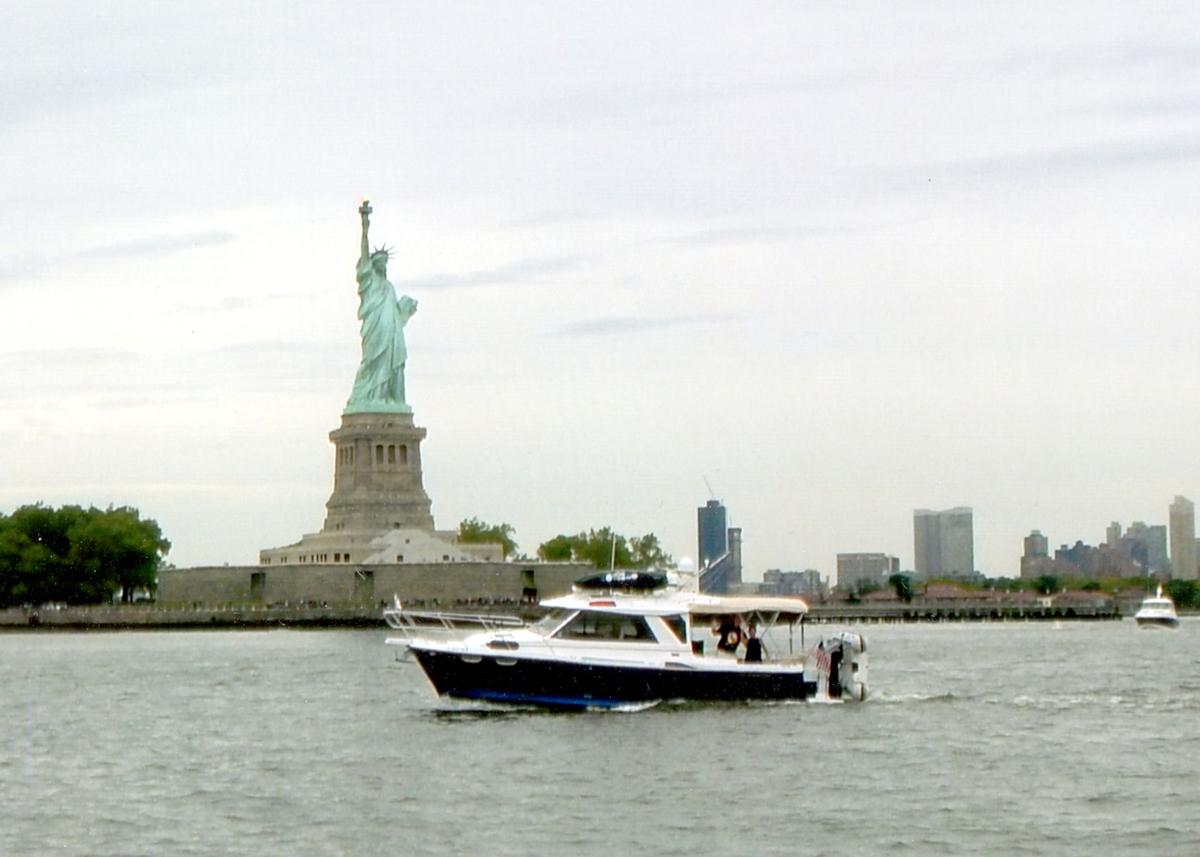 The Schumacher’s in their Cutwater 28’ power boat cross in front of the Statue of Liberty along their America’s Great Loop journey. 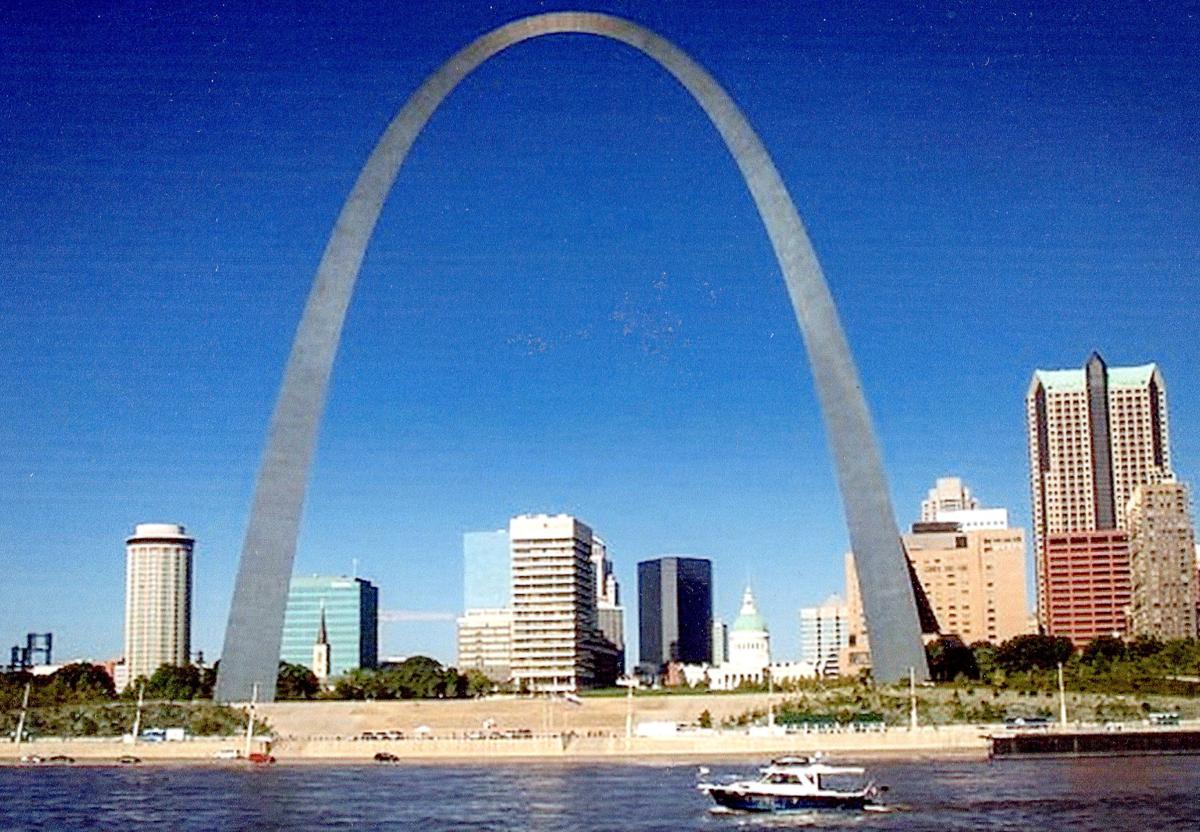 Kenny and Sherry Schumacher’s boat “Blue Moon” passes in front of the Gateway Arch in St. Louis as they were making America’s Greatest Loop in association with America’s Great Loop Cruisers’ Association.

The Schumacher’s in their Cutwater 28’ power boat cross in front of the Statue of Liberty along their America’s Great Loop journey.

Kenny and Sherry Schumacher’s boat “Blue Moon” passes in front of the Gateway Arch in St. Louis as they were making America’s Greatest Loop in association with America’s Great Loop Cruisers’ Association.

A couple of Altamont boating enthusiasts never thought they would be going on a 6,000-mile boat ride when they purchased their first boat for water skiing on area lakes.

“We’ve always loved to ski boat with our son and friends for years,” Kenny Schumacher said.

“We went to Forbes (Lake) a lot,” Sherry Schumacher added.

In 2012, the couple purchased a sailboat in Florida, where they lived during the winter months. They had the sailboat for about six years when they learned about an association of cruisers called America’s Great Loop Cruisers’ Association.

“We were really not sure what the loop was until we started talking to other boaters about it,” Kenny Schumacher said. “And it really intrigued us.”

The AGLCA organization is made up of “Loopers” based in Summerville, South Carolina, who like to circumnavigate their watercraft counterclockwise around the eastern part of the United States and Canada and make their way down the inland rivers back to their starting point. About 150 cruise enthusiasts complete the loop every year.

“The reason most people go counterclockwise is if you go clockwise you have to go against the current of the Mississippi (River),” Kenny Schumacher said.

He said the weather is a major consideration a boat pilot has to evaluate when planning a cruise around the loop. Loopers are able to start their loop at any point and end at the same starting point.

“You don’t want it to be cold as you go around,” Sherry Schumacher said.

The Schumachers said they started planning their trip two years before they actually decided to make the loop, referencing several sources – including waterway guides and charts.

“One book may have a list of all of the marinas on the trip,” Kenny Schumacher said.

Kenny Schumacher said there are quite a few route options available when making the 6,000-mile journey. On their loop journey, they decided not to stop in Key West, Florida, and took an alternate route since they already visited the area in their sailboat.

“At first, we thought we’d make the loop in the sailboat,” Sherry Schumacher said. “That is when we sold the sailboat and bought the boat we have now. We thought it would be a better fit for what we wanted to do.”

The couple found a midnight blue Cutwater 28-foot water cruiser in Pensacola, Florida, and named it “Blue Moon” after where they were going to start their 6,000-mile journey around the loop.

Kenny Schumacher said their boat was one of the smaller boats cruising the loop.

“Your average-sized boat is about 40 feet with one or two bedrooms,” Schumacher said.

The couple started in Pensacola on March 2, 2018, and completed their loop on Oct. 23 of that same year. When they joined the AGLCA organization, the couple was issued a white banner flag to display in front of their boat while cruising the loop.

He said they traveled from Pensacola, Florida, to the Okeechobee Waterway crossing Florida heading east to the Altantic Inland Waterway to continue their venture north. They entered the ocean at Atlantic City, New Jersey, and piloted their way to New York.

They cruised up to Albany, New York, then went up through the Erie Canal through the Trent-Severn Waterway in Canada, where they picked up a pass to make their way through 45 Canadian locks to Georgian Bay. They proceeded into Lake Huron and Lake Michigan before making their way south to Kentucky Lake, then Tennessee River to Pickwick Lake and on to Mobile, Alabama, then back to Pensacola.

“When you see other folks displaying the AGLCA banner, you know you’re on the same trip,” Kenny Schumacher said. “We’d keep an eye out for the banners when we came into the marina at night.”

“And if there was a pavilion there, we would all meet and talk to each other and share boat cards and tell dock tales. If you have any questions, it’s a great time to ask for tips before you head out to experience something unknown. Some of these Loopers have made this trip several times,” Schumacher said.

Schumacher said each cruiser has their own set of special calling cards with their boat name, along with the boat pilot’s address, that they would trade with other boaters along their journey.

“It’s fun to look at those and remember the people,” Sherry Schumacher said. “We still have people we are in contact with.”

Sherry Schumacher said sometimes they’d have to wait at a marina until the weather is safe for travel. She said while staying at the marina Loopers would get together and continue their journey in a group.

“But sometimes you get separated from them for awhile then later on you see them again,” Sherry Schumacher said.

Kenny Schumacher said in one instance they met a couple when they were crossing Lake Okeechobee in Florida and didn’t see them again until months later when they were cruising through Canada.

“Everyone goes at their own pace,” Kenny Schumacher said. “However you pass each other back and forth throughout the trip.”

“We almost always slept on our boat,” Sherry Schumacher said. “Everyone we met slept on their boat.”

She said there was only one night they did not sleep on their boat when the air conditioner broke down.

“We really met a lot of people from everywhere,” Sherry Schumacher said.

“We met people from England, Pacific Northwest and from California – just about everywhere,” Kenny Schumacher said.

Schumacher said there were quite a few challenges they experienced along the way, including one in which they had to stay in several days along Lake Michigan due to the weather and high winds.

“The rivers are not that much fun. They just aren’t,” Sherry Schumacher said. “The sightseeing is good along the rivers, but there’s logs you have to dodge along the way.”

“And you’re sharing the rivers with larger commercial traffic with the barges and you have to take your turn getting through the locks,” Kenny Schumacher added.

“They take commercial traffic before they take pleasure boats,” Sherry Schumacher said. “You have to wait for hours sometimes.”

Kenny Schumacher said another challenge is navigating waters for the first time.

He said asking questions of other Loopers and getting assistance from AGLCA before navigating through an area makes it less difficult. He said most Loopers have made the loop multiple times.

The Schumachers also relied on advice from Harbor Hosts when stopping at a marina. Sherry Schumacher said the Harbor Hosts were like campground hosts who are available to take boaters to get groceries or to town while some Harbor Hosts are on the loop helping out.

“There is a competition for Harbor Host of the Year,” Kenny Schumacher said. “So, they really try to outdo each other.”

“They are full of information,” Sherry Schumacher added.

Kenny Schumacher said one of the highlights of the loop was coming up on a U.S. Marine Corps base in North Carolina and seeing the old tanks and military equipment placed close to the water. He said they had an area where they had to wait in the water if they were conducting training.

“You could hear the exploding ordinance at night in the distance,” Schumacher said.

Another site that impressed the couple were the high cliffs along both sides of the Hudson River. Kenny said there was a railroad running about two feet above the water right along the river. The Hudson River also brought them by the United States Military Academy West Point.

“You can learn so much about the area from the local folks,” Sherry Schumacher said.

Kenny Schumacher said Canada is one of the most popular areas with Loopers because they have the cleanest facilities.

He said after completing the loop they were given a golden banner in honor of finishing by the AGLCA to replace their white banner they used on their first loop. A silver banner is issued for completing the loop more than once. The AGLCA also gave them a “BaccaLOOPerate” degree for their 6,000-mile journey.

“We kind of did it in a hurry. We did it all in one year,” Kenny Schumacher said. “Some people do it in two years.”

The Schumachers recorded their loop experiences in a daily journal.

They averaged about 57 miles a day and were on the move for 91 days of their journey stopping to rest for extended periods of time to either explore an area or just get some needed rest. They touched 17 different states and went a little out of their way to travel north of the 46th parallel in the top quarter of the world. In total, they went through a total of 104 locks, including the 45 locks in Canada and passed under 583 bridges.

“We were really anxious to get this trip over when we hit the three-week mark before the end of our loop,” Sherry Schumacher said. “I think if you stopped and took longer breaks you wouldn’t feel that way.”

“Some people sell their homes and live on their boats,” Kenny Schumacher said.

“So they can take a long time to finish the loop because they don’t have anywhere else to go,” Sherry Schumacher added.

After finishing their first loop, the Shumachers decided they probably wouldn’t do it again. However, as time has passed since their loop in 2018, they are thinking about visiting some of the points along the loop they wanted to explore, but didn’t have time to enjoy.

“We went through Chesapeake Bay way too fast and I’d like to go through Canada again,” Sherry Schumacher said.

“I recommend anyone wanting to take the loop join (AGLCA),” Schumacher said.

“It’s a wonderful trip. You will see so much of your country and all of the little cultures in our country and Canada will welcome you too. It is such a friendly place,” Kenny Schumacher said.

“There is so much to see and remember,” Schumacher said. “And there is no way you can see it all in one trip.”