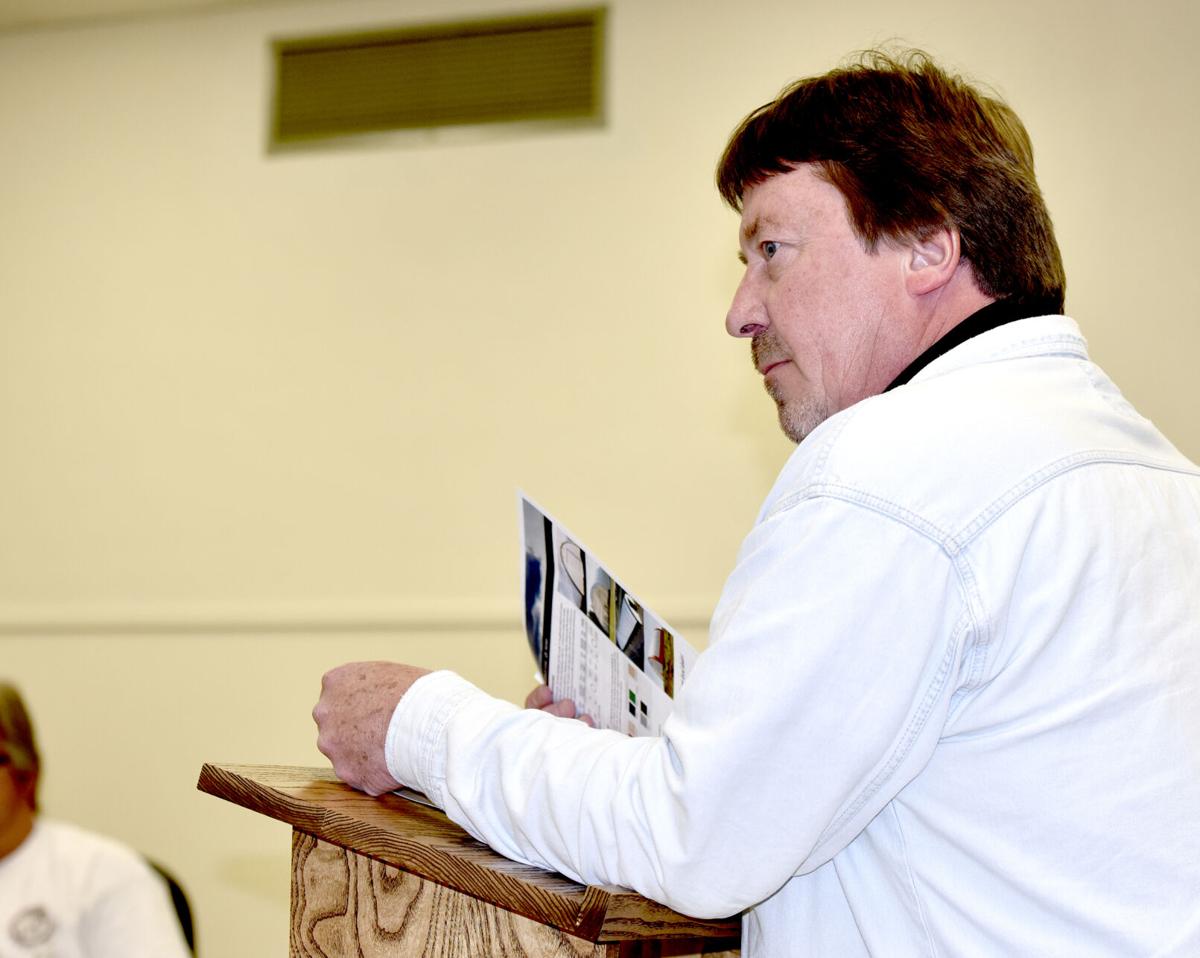 Mark Workman, owner of the Whistle Stop Saloon in downtown Altamont, answers questions from Altamont City Council members about a structure he wants to build behind his business. The council voted unanimously to let Workman build the structure. 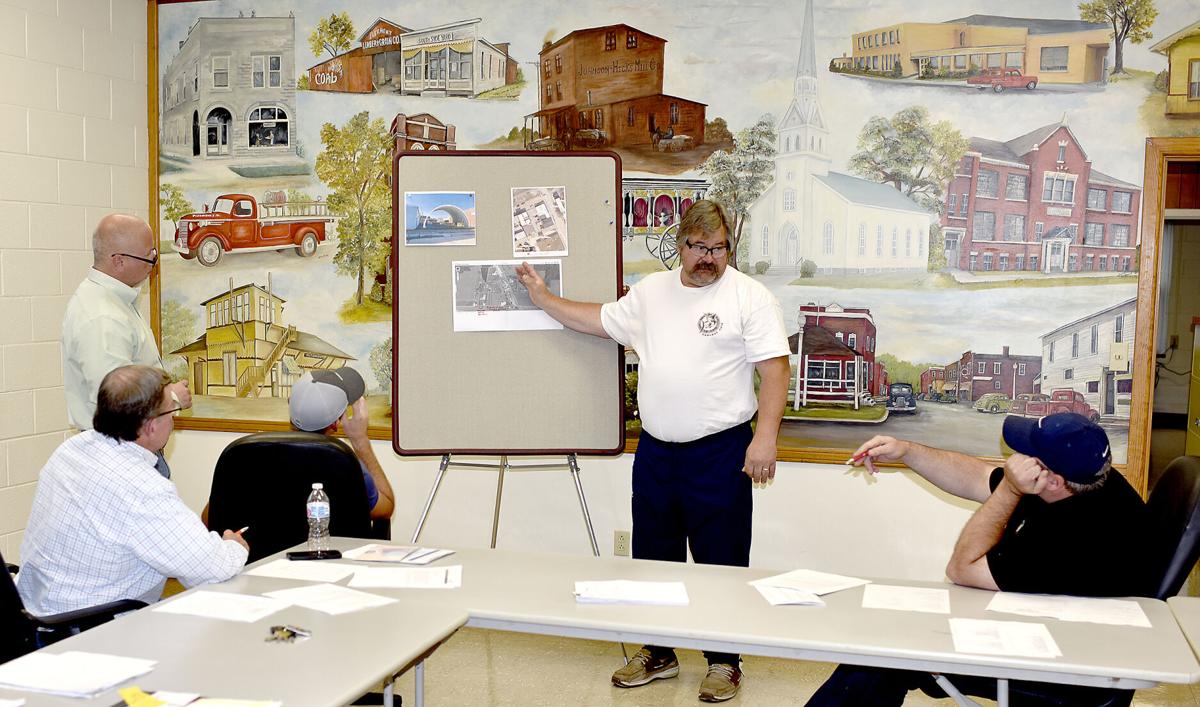 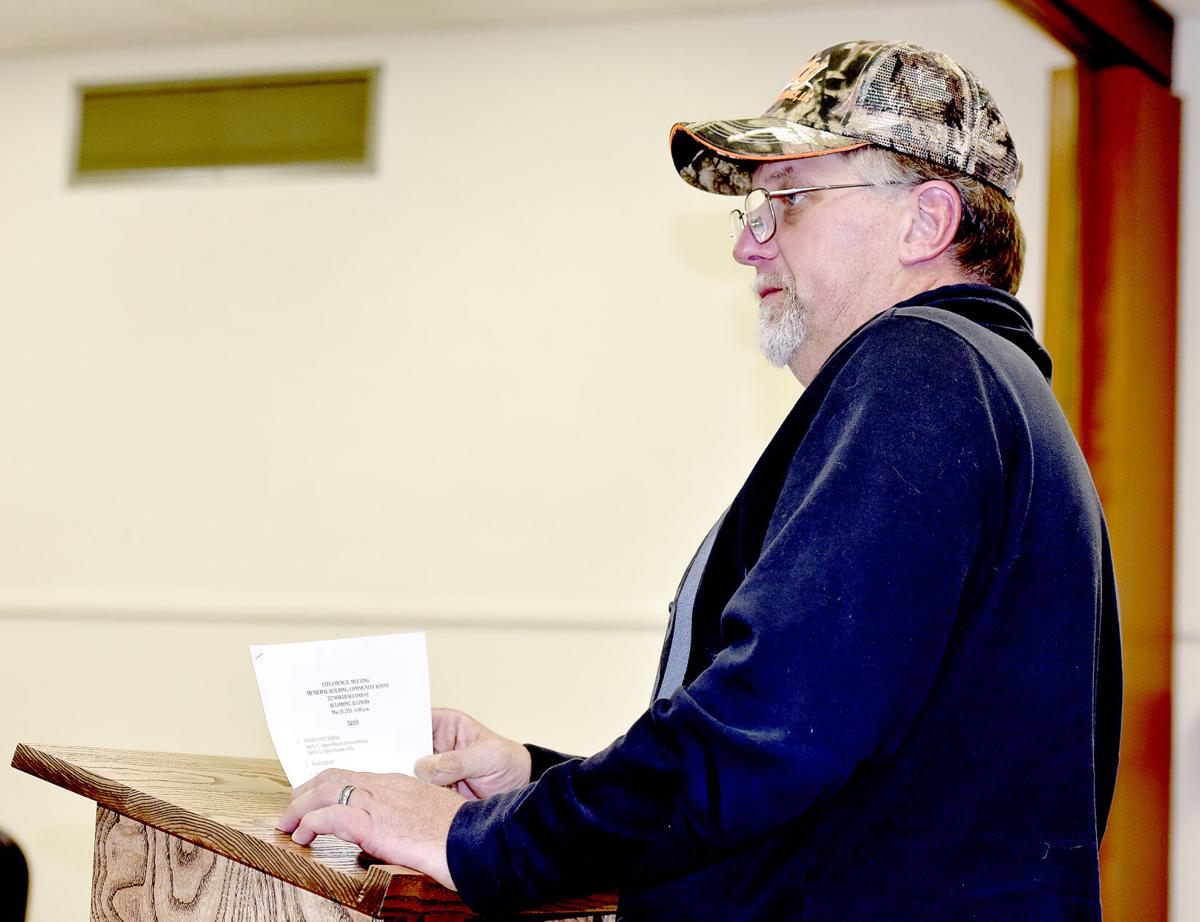 Altamont Resident Terry Plowman asked the council to consider letting side-by-side vehicles operate in Altamont following the same rules as golf carts within the city limits. Council members did not approve the request.

Mark Workman, owner of the Whistle Stop Saloon in downtown Altamont, answers questions from Altamont City Council members about a structure he wants to build behind his business. The council voted unanimously to let Workman build the structure.

Altamont Resident Terry Plowman asked the council to consider letting side-by-side vehicles operate in Altamont following the same rules as golf carts within the city limits. Council members did not approve the request.

ALTAMONT — Members of the Altamont City Council have approved the construction of an accessory structure behind the Whistle Stop Saloon.

Mark Workman, owner of the Whistle Stop, wants to put up a structure similar to the one used by Pinky’s Restaurant at Lake Sara.

Milleville said he went to see for himself the location where Workman wanted the structure and had a few questions.

“Tell us about the 2-foot blocks,” Milleville asked. “Will these be solid blocks and will they be on both sides east and west?”

“Right at the back door (Whistle Stop Saloon) there will be an opening there, on the south end towards the bank there will be a 14-by-14-foot garage door and the front end will be open,” Workman said.

Workman wants to have fans to keep the air moving through the structure, and by fall he hopes to have rollers installed so he can bring his canvas down on the sides so he can close it off in the winter.

“Hopefully, I can get an extra month’s use out of it in the fall and the same thing in spring,” Workman said.

“I noticed on the variance permit the side setbacks were 4 feet on the sides. You wanted a zero on the north but then zoning went back to the 4-foot setback,” Milleville said. “I think that was a good idea because of that drop-off from the asphalt back to the sidewalk.”

Milleville asked Workman about a fence to be installed on the north side of the new structure.

Workman said he took down a fence in the same area when he repaved his parking lot and would like to have a fence with a gate for entry and exit.

“I think there should be a gate there for an emergency exit,” Mayor Jason Rippetoe said. “I think for emergency purposes being able to get people out is important.”

“Is this a temporary structure or is this something you want to leave there long term,” Polk asked Workman.

“Yes, I’m going to leave it there,” Workman said.

“Would you know the life expectancy on the structure?” Polk asked.

“It supposed to be guaranteed for 15 years,” Workman responded.

The council unanimously approved variances for an accessory structure with conditions set aside by the zoning board to be located behind the Whistle Stop Saloon in downtown Altamont.

Meanwhile, Commissioner Michael Walker said the SCADA system used by the electric department is out of date. The system is over 20 years old that monitors the Altamont electrical grid.

“It tells us when we’re online and offline and if we are producing what we should be. It is an overall monitoring system,” Walker said. “It still works. It’s still functioning. However, if anything were to go wrong with it, there is no fix for that system.”

Walker said some of the components of the system needed to be replaced before the system fails.

Altamont Electric Department Superintendent Dillon Meier told the council labor, hardware and miscellaneous equipment needed to upgrade the SCADA system is estimated at $22,000. He said they would also need two new computer towers at $1,600 each with up-to-date software and operating system to drive the system.

“You have to have everything compatible,” Walker said.

“What is status of the system now if you have a downed line?” Polk asked Meier.

“We have an autodialer connected to it in case one of our two breakers goes out,” Meier said.

Walker said he wanted the council to have a heads-up on the situation and a look at the cost of making upgrades to the system.

“If this system goes down tomorrow, we don’t have one,” Meier said.

“We should know more in coming weeks. We just don’t want to wait until our system goes down,” Walker said.

There was a discussion about the use of side-by-side vehicles within the city limits of Altamont. The discussion had been requested by Altamont resident Terry Plowman.

“I would say if it is approved we follow the same ordinances golf carts have to abide by,” Plowman said. “This is a chance for more revenue for the city because of the stickers the side-by-sides have to purchase.”

Plowman said there was concern about noise the side-by-sides make when in operation.

“They are about as loud as my truck driving down the road,” Plowman said. “I don’t think anyone who isn’t a licensed driver should be driving them and that should be the only way they get a sticker.”

“I disapprove of them because of the noise,” Altamont resident Gale Warner said.

Council members did not proceed with an ordinance that would allow side-by-sides to operate within the city. All council members remained silent when asked by the mayor if there was a motion to proceed.

• Approved a change of orders to section A and B of water main improvements for U.S. Route 40 and Illinois 128.

• Approved an appointment ordinance to include current city supervisors, clerk and treasurer.

• Approved a request from Masonic Lodge 533 to conduct the Memorial Day Parade on Monday, May 31, at 10 a.m.