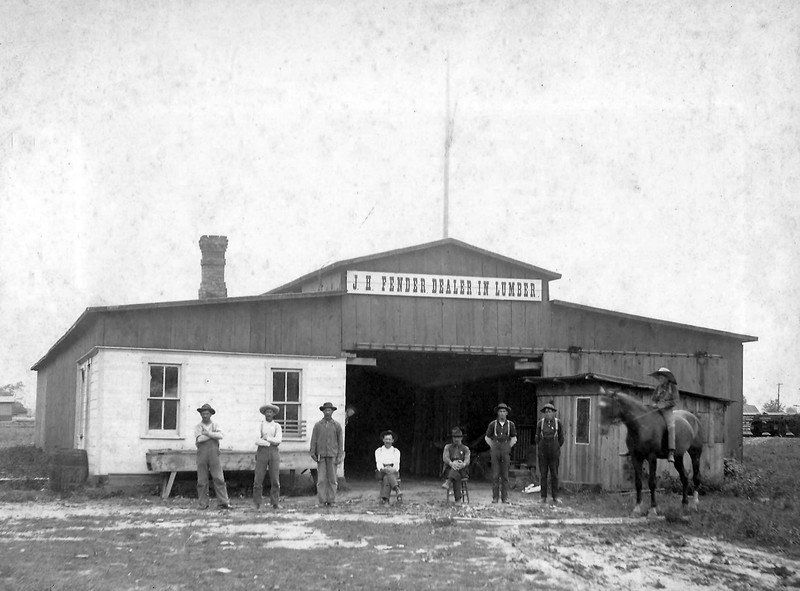 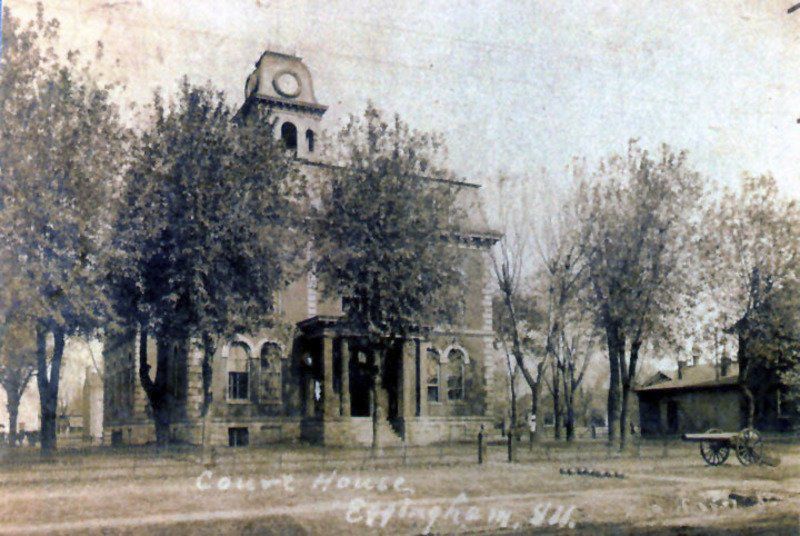 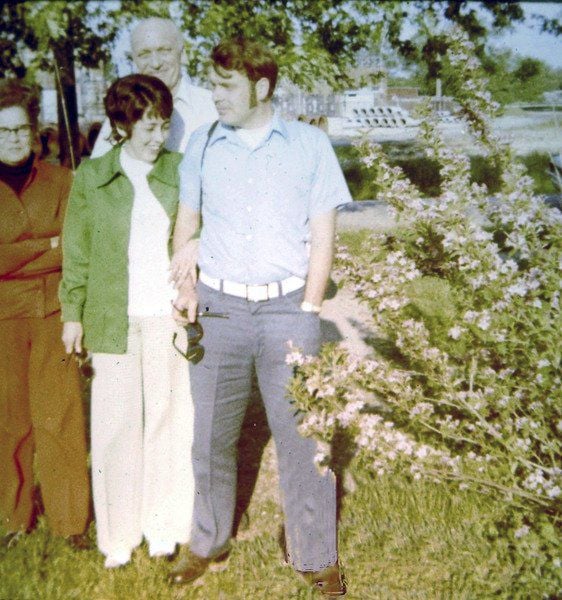 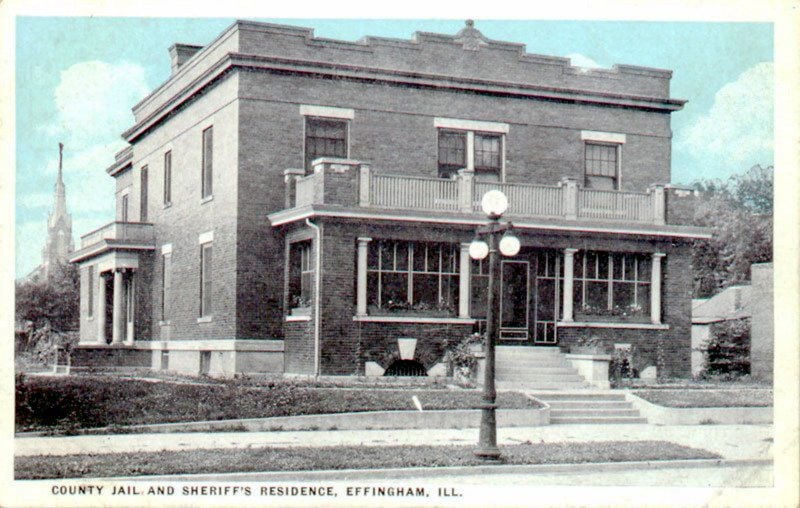 Since 2009 when my work with the museum began, the number of pictures has increased immensely. I use a lot of them on the museum's Facebook page, "Effingham County Courthouse Museum Effingham IL." I've watched that page grow from a handful of people who follow us to close to 8,000 now. That being said, I'm always looking for pictures of Effingham County.

In May, I decided to check out pictures on eBay. I hadn't been on it for quite some time but there are usually pictures, postcards and memorabilia from Effingham County for sale. That time didn't disappoint me.

On the back of the picture it said "Edgewood, IL abt 1908 Seated Jas. Fender and Marty Jakle." When I saw that, I knew I had to have that picture. You see, my first cousin is named Martin "Marty" Jakle and I've heard him tell many times about how he was named for his great-grandpa, Martin Jakle, a former sheriff of Effingham County. I paid a lot of money to get this picture, so now I've decided to tell the story of what I've learned about J.H. Fender and Martin Jakle. Luckily, the seller had added newspaper clippings of their obituaries in his listing.

I first checked out the Edgewood Centennial Book 1857-1957. In it, I found out that James H. Fender's lumber yard was located near the Illinois Central railroad north of the depot. He married Mary Newberry in 1891 in Effingham County. In 1900, I found James and Mary in Mason Township, where James is listed as a farmer and they have three sons, Earl, Harry and John. I next found that James and Mary's son, Earl Samuel Fender (age 19), married Helen Sharlotte Hoffman on April 1, 1911, in Edgewood. I didn't find the marriage records for the other children.

I also discovered looking through old marriage records that in 1916 James Henry Fender married Anna Baker, daughter of Mock and Zilpha (Rose) Baker. By 1940, I find James H. and Anna L. Fender living on West King Street in Decatur. Through his obituary, I discovered that he married again. The rest of his story I will tell through his obituary.

In his early life, he was engaged in the lumber business in Edgewood. In 1920, he accepted a position with the Standard Oil Company of Decatur with the maintenance department. This position he held until his retirement in 1940.

He was a member of the Edgewood Christian church, where he attended regularly. He was married to Lela Carlton Baker in Effingham, Ill., Aug. 9, 1948 and since that time he has resided in Edgewood.

He leaves to mourn his passing his wife Lela; four children by a former marriage, Evelyn Koltzlnick of Baltimore, Earl of Decatur, Harry of Evanston and John of Laporte, Ind.; and an adopted daughter, Mrs. Anna Feldpouch of Oakland, Calif.; one sister, Mrs. Eva Donaldson of Decatur; eight grandchildren, nine great-grandchildren and a host of other relatives and friends."

James H. Fender is buried at Edgewood Cemetery. He is buried next to Anna L. Baker (his 2nd wife), who died in 1947.

It was easier to find information on Martin Jakle because he was listed in the 1910 "History of Effingham County, Illinois". Here are some excerpts from that book.

"He is the son of Felix and Mary Ann (Settle) Jakle, both natives of Baden, Germany, where they married. In 1854, they came to the United States, coming direct from their landing place in New York to Cleveland, where their son Martin was born.

In 1855, the family removed to Terre Haute, Ind., and in 1867 to Effingham County, Ill. By trade, the father was a shoemaker, but he conducted a brewery in Effingham for a year. The mother passed away in Effingham, in 1875, and the father in 1879, and both are buried in the City Cemetery." (Oakridge Cemetery).

Martin married Catherine Klements (Clements) in Terre Haute, Ind., on May 9, 1875. They became the parents of five children: William, Albert, Otto, John and Julia. Martin and Catherine's son William would later marry and have a son, Kenneth, who married Kathryn Loy.

Ken and Kathryn Jakle had two sons, Richard "Rick" and Martin "Marty," and raised them in Neoga, Illinois. That's the connection that made me want to buy this picture. I will now tell part of Martin Jakle's story through his obituary.

Martin Jakle was the son of Mr. and Mrs. Felix Jakle. He was born in Cleveland, Ohio, August 28, 1854. When a child, he came to this city with his parents where with the exception of a few years in Terre Haute, he has lived his life.

May 8, 1875, he was united in marriage to Miss Catherine Clemens (sp), who passed away in 1924. Surviving are one daughter, Mrs. D.K. (Julia) Bradley, Indianapolis, and three sons, William, Albert and Otto, of this city, and six grandchildren and one great-grandchild.

During his lifetime, Mr. Jakle was in the bakery business in Effingham for fourteen years. He served on the city police force for sixteen years. Two terms as sheriff were served from 1906 to 1910 and 1914 to 1918. Since relinquishing the office of sheriff, he has served continuously as Justice of the Peace and also engaged in the insurance business. He was a life-long democrat and served for many years as County Central Committeeman. He was one of the few surviving charter members of the Effingham branch of the Knights of Columbus, who last year honored him with other members by presenting him with a beautiful emblem.

I give one last quote about him from the 1910 "History of Effingham County, Illinois": "Martin Jakle, Sheriff of Effingham County, has taken an active part in shaping public sentiment whenever the welfare of the county or city has been at stake, and is a representative of the best type of citizens in this part of the State."

Every picture has a story to tell if you just take the time to learn about it and share it. At the Effingham County Museum, we tell the story of Effingham County one picture, one person and one place at a time.

Contact me if you have any questions about either event. My email is janeries55@gmail.com and my cell phone is 217-821-2427.