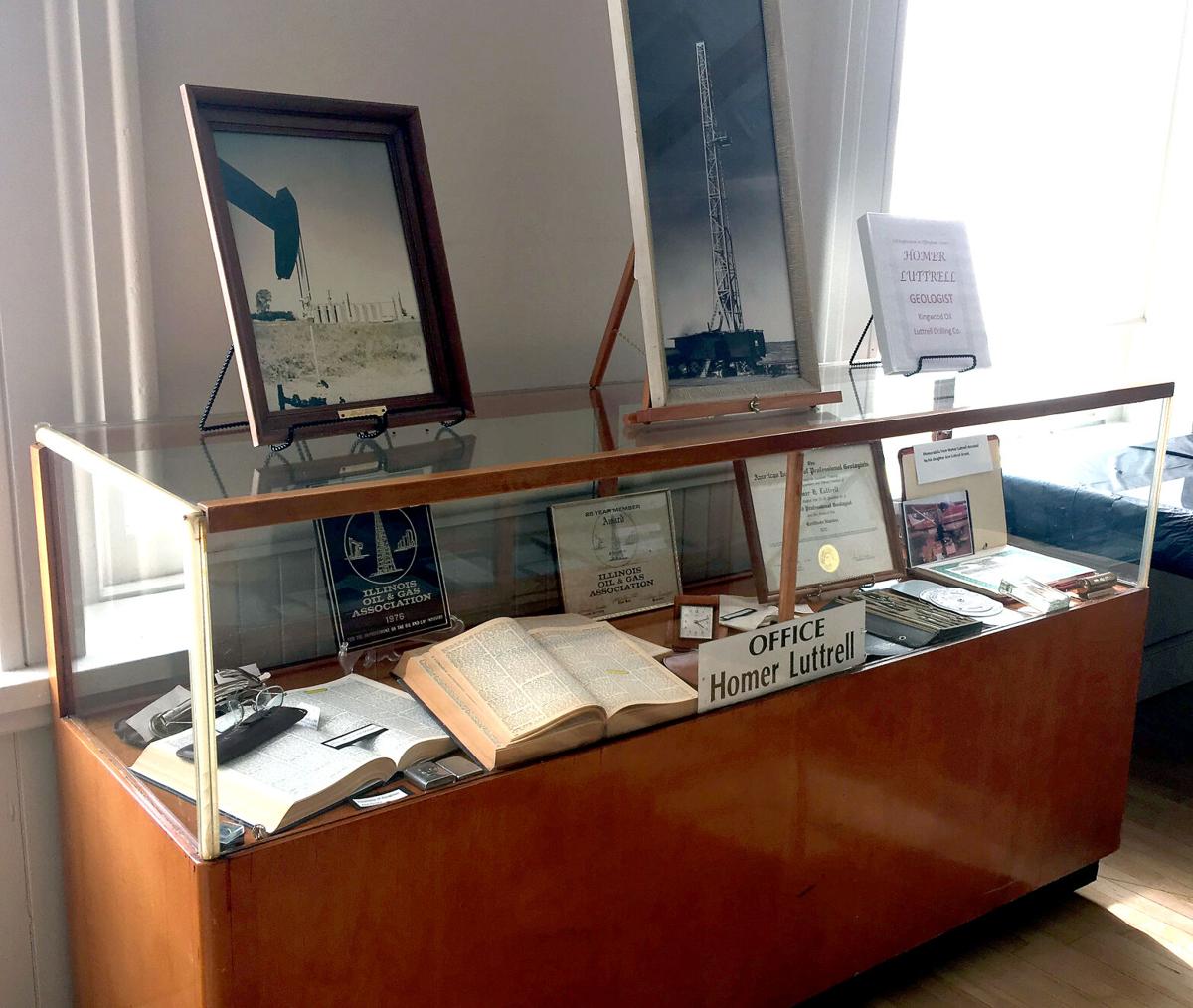 The Luttrell display case is shown at the Effingham County Museum. 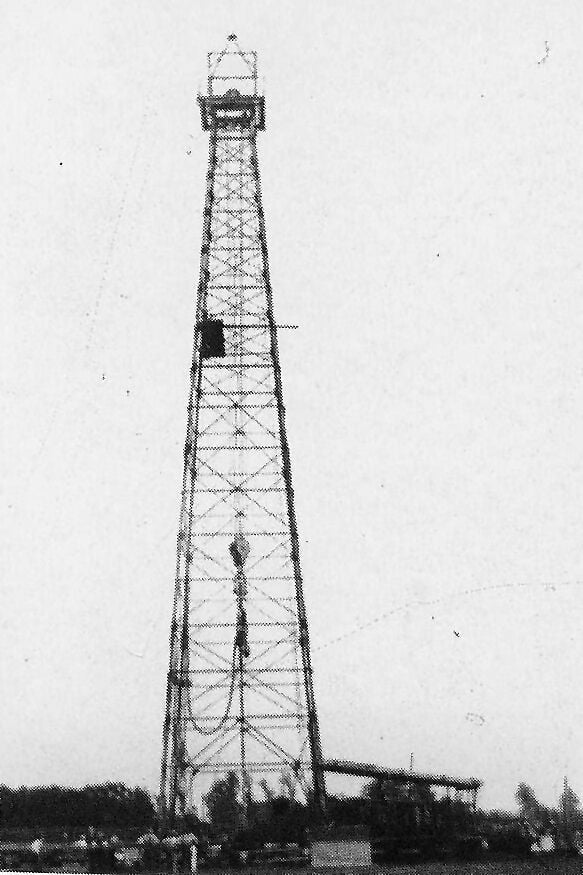 An oil derrick during the Effingham County Depression is shown. 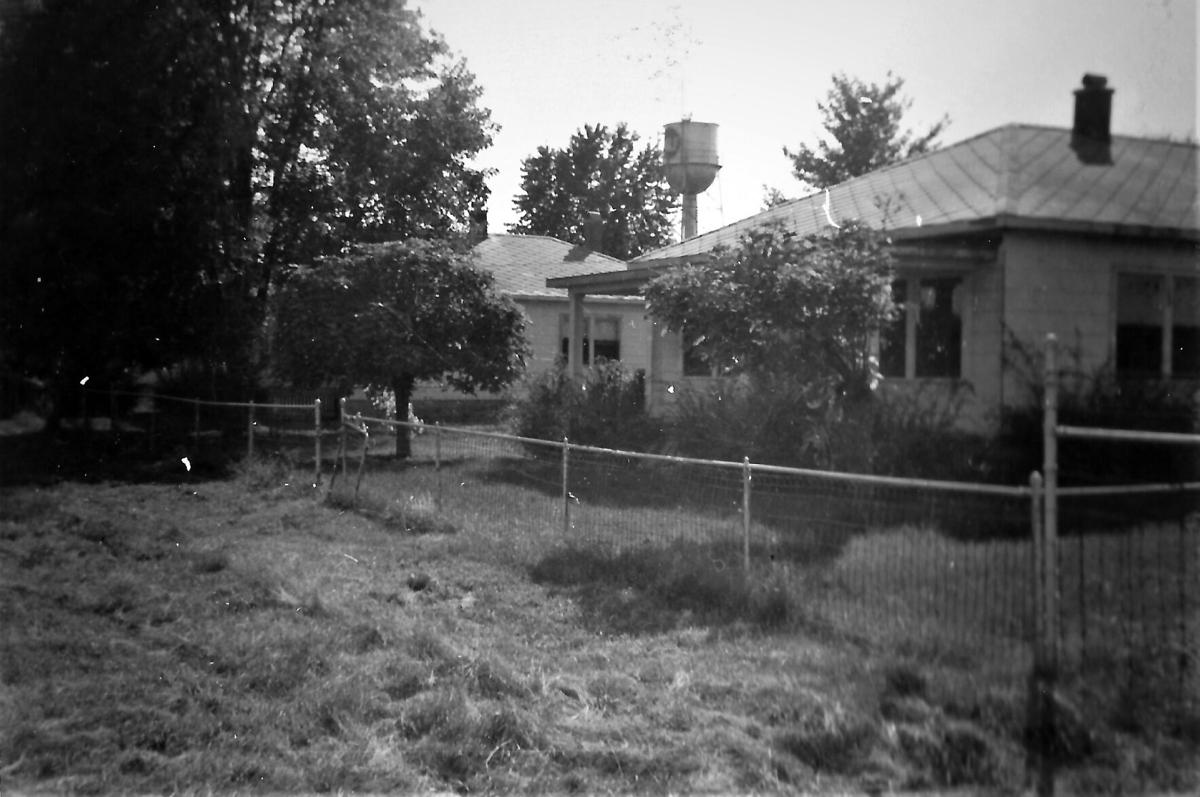 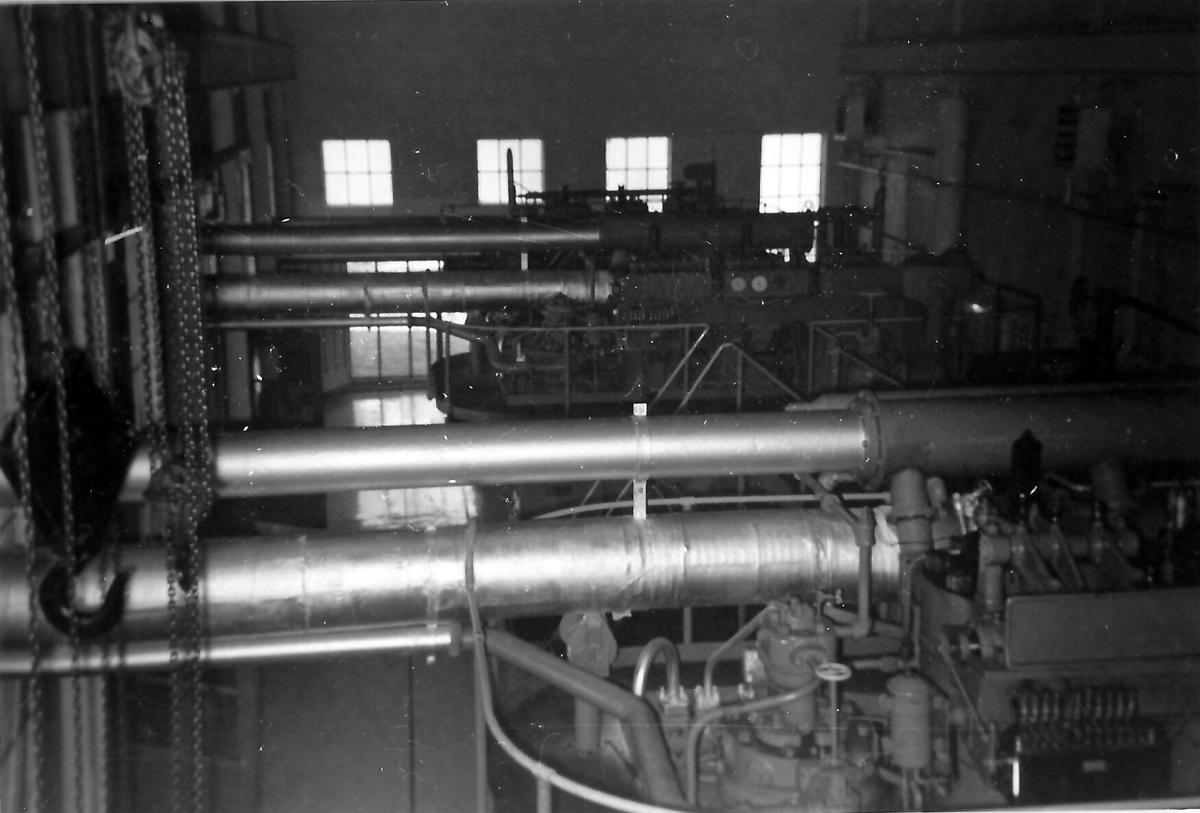 Inside the Edgewood pump station. 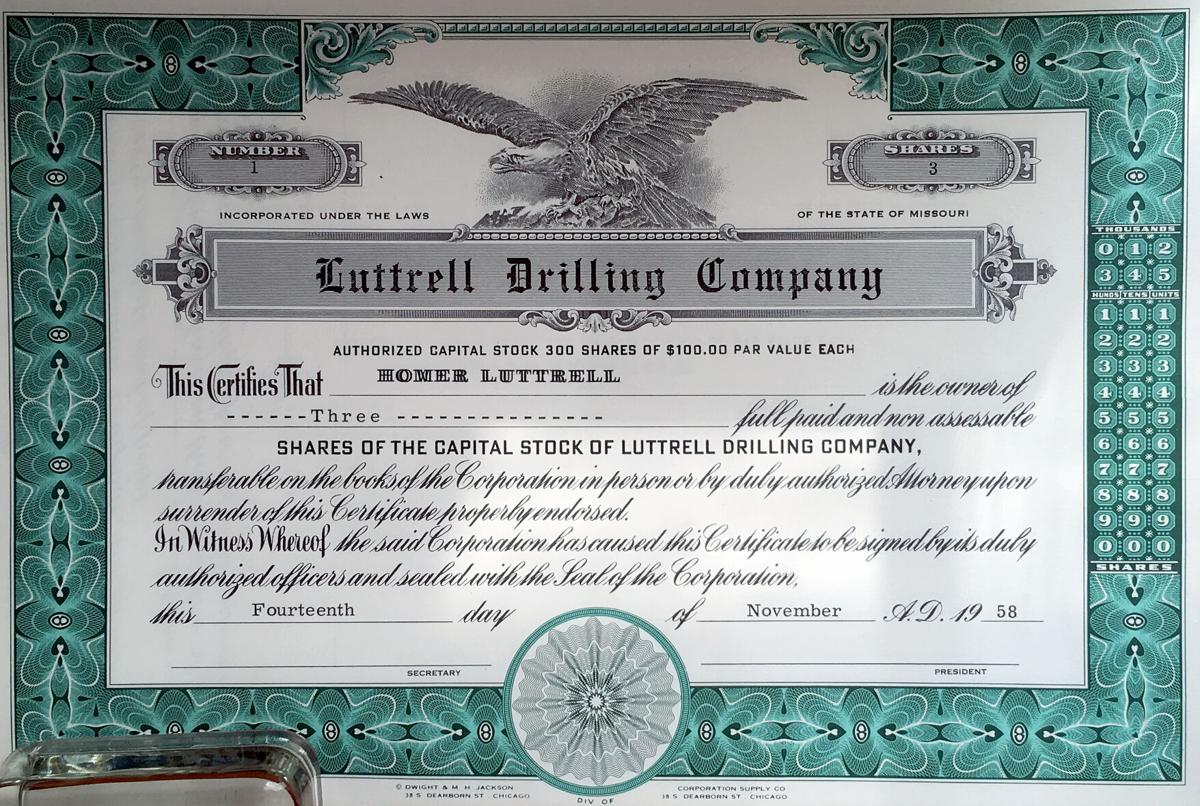 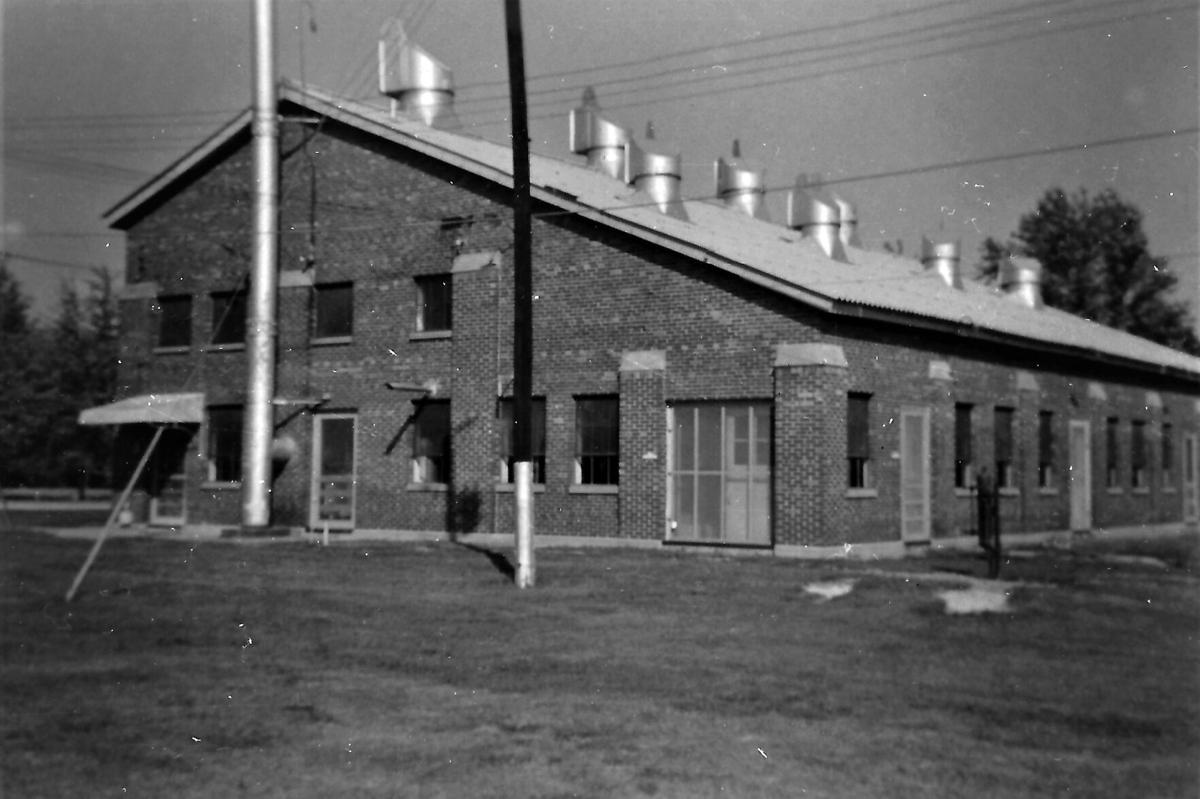 A close-up view of the pump station is shown. 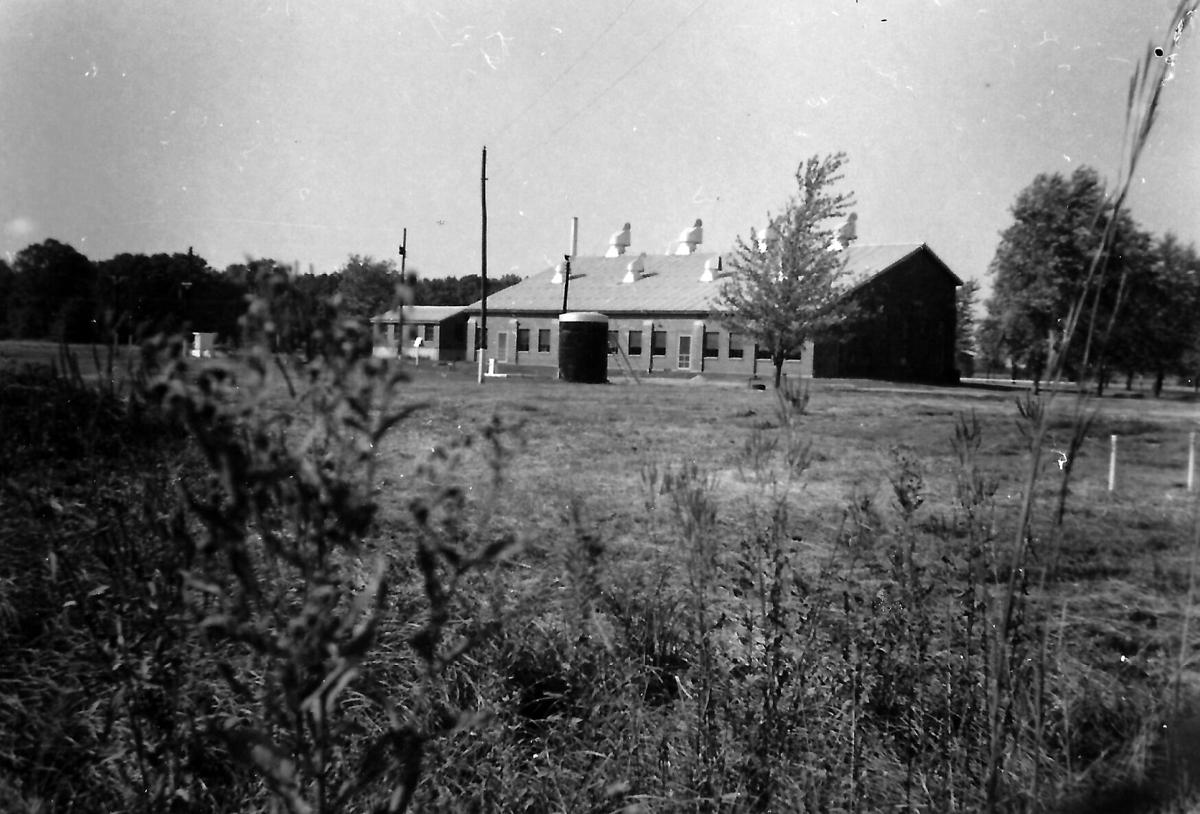 The Luttrell display case is shown at the Effingham County Museum.

An oil derrick during the Effingham County Depression is shown.

Inside the Edgewood pump station.

A close-up view of the pump station is shown.

Sunday afternoon drivers in certain parts of Effingham County frequently will see oil wells; some pumping, some not.

Regardless of the working state of the devices, they attest to the fact that a portion of the local economy depends on the various parts of the oil business — a very important national industry. There must be oil exploration, drilling, and refining of the crude oil before the finished product is distributed to consumers.

For many decades, a long and fascinating story that is part of the local heritage has involved area residents in most phases of the huge industry. What happened during the Great Depression is a very significant portion of that history. It is a story which connected Edgewood, Illinois, and other small towns in this part of the state, with major oil companies and with oil operations throughout the nation.

By Sept. 1, 1929, Gulf Pipeline Company had been at work in south-central Illinois for several months laying the pipeline when it started building a large pump station five miles southeast of Edgewood. When it was finished, an Edgewood worker and a machinist from Detroit set the pumps in place. Because an area for a large storage tank had to be cleared of all trees, for two or three weeks dynamite blasts used in removing tree stumps rocked the area.

After the tank was built, the company pumped water through the new pipeline to flush out the dirt and test it for leaks. The whole process involved walking the distance of the line, 25 miles a day until the line between the new station and other neighboring stations could be approved. In 1929, the pay for such work was 55 cents an hour. The workers would repeat that inspection four times per year.

Work involved with the station continued into new decades. In 1942, the State Geological Survey indicated Gulf had put in two miles of three-inch pipe from the Mason Field to the Edgewood Station. Five homes were built at the Edgewood station for Gulf employees who lived in them. The homes were sold in the mid-1950s.

A 1951 Interstate Commerce Commission report described the Gulf Oil Refining Company Pipe Line Department’s service in the Edgewood field near the Edgewood pump station being part of important gathering lines for the company.

Newspapers located in this part of Illinois and farther south frequently carried articles regarding the county’s oil business. In February of 1938, for instance, three stories about Effingham County dealt with different issues: One spoke of the loss of tools at a depth of 2,705 feet southwest of Effingham. This required “fishing” for the lost items. Another dealt with the setting of surface pipe in Lucas Township. A third described Effingham County’s third deep test being “spudded in” and awaiting the arrival of drilling tools. Kingwood Oil was listed as the company involved. Two weeks later, the Beecher City field was the subject as Carter Oil Company described a well that was going to be a fair producer of oil. Early April stories dealt with Carter Oil’s involvement in the Beecher City field at a well making about 275 barrels of oil daily, while Kingwood Oil was drilling at 3,296 feet in Union township. Ten producers were “brought in development of the field (progressing) at a steady pace.”

Working the Southern Illinois Oil Basin meant working many scattered pools throughout the southern part of the state. Centralia, Marshall, Vandalia, Olney and Effingham all had offices at a variety of oil companies. In Effingham, in addition to Kingwood Oil, Mid-Continent Oil also had an office.

Former Effingham High School teacher Ed Allen in his master’s thesis, “Effingham County During the Great Depression,” described how “oil fever” spread rapidly when the Carter Oil Company struck oil on the Mary Miller farm just across the Effingham-Fayette County line during September 1937: “Drillers from Oklahoma, Texas and Kansas continued arriving daily including those working for the Kingwood Oil Company, which had originally sub-leased much acreage to Carter.

“Prominent oilman Joseph T. King had founded the company in 1914 eventually becoming one of the 10 largest Oklahoma drilling firms ... Leaving behind several dry holes, King and a young geologist named Homer Luttrell sought new riches in Illinois, arriving in Robinson during April 1937. Oilmen there explained an oil syndicate of Effingham businessmen held leases on 60,000 to 70,000 acres in Effingham and Fayette counties, failing so far to reach satisfactory terms with prospective drillers.

“King and Luttrell found Effingham to be sort of an antique, with several old storefronts but prosperous compared to poverty conditions back in Oklahoma. Talking with the people who seemed reserved but certainly nice from a business standpoint, left the impression that Effingham County had experienced minor hardships compared to other areas. ... After successfully negotiating with the syndicate, Kingwood became one of Illinois’s largest leaseholders overnight. King sold Carter Oil several leases, purchased new rigging on credit, and both began striking oil shortly thereafter.

“Production centered in Mason near the county’s southern perimeter and also along the southeast corner. While many wells continued pumping into the 1970s yielding considerable production over the years, all “big hits” always came in just across the line into surrounding counties. Much money poured into the county from leasing, however, and the “oil johnies” wages contributed nearly as much to the economic recovery from 1937 to 1939 as Roosevelt’s New Deal.

“Luttrell explained events moved so rapidly that residents didn’t understand what was happening to them,” and he himself left Kingwood in 1938 to start his own drilling firm and became an affluent permanent resident. Harold Taylor’s Effingham Title Company became swamped with title transfer requests, eventually employing about 20 women on two eight-hour shifts during the frenzied oil leasing activities of 1937-40.

“Demands for room and board from the ‘oil johnies’ touched off serious housing shortages, along with a construction and remodeling spurt. Natives found the newcomers, whose $4 daily salaries boosted the grocery and retail trade, generally affable though somewhat rowdy. Homeowners in Effingham and Altamont partitioned their homes into efficiency apartments, and shaped basements and attics into extra rooms. Between 1937 and 1939, nearly 100 new homes were built in Effingham alone, and housing still remained in short supply. One newlywed couple left town on their honeymoon shortly before the oil madness, and returned home surprised to find nothing available. The Altamont Chamber of Commerce described conditions in their city as “desperate,” challenging a special housing committee to find a solution. Mayor Klitzing watched rent and property values double inside the three-year period in his town where no major building had previously occurred.

The growth of population in the county’s towns was an indicator of economic success. The total gain in population during the decade of the 1930s was: Effingham, 1,202; Altamont, 886; Beecher City 185; Teutopolis, 96, Montrose, 25; Mason, 2; and Shumway 2. Edgewood, Dieterich and Watson all suffered population losses. Overall, the county experienced 25.3% population gain. Effingham experienced marked growth during the Depression decade.

In the booklet, “Making a Living in the Good Old Days,” master local historian Peg Pulliam provided a description of how life in Effingham County began to change:

“Spurred by the discovery of oil in several nearby counties, people connected with the oil industry flowed into Effingham. Lease scouts, royalty buyers, seismograph crews and drilling crews came here to locate, for a time at least. The Kingwood Oil Company moved their offices here in the old College of Photography building. They had a hundred or more employees and were here for several years. While we have no exact figure as to the numbers, I believe there were at the height of the boom at least five or six hundred additional people living in Effingham. Rental homes were at a premium; anyone who had an attic or a chicken house at all fit to be occupied, converted it into an apartment, for living quarters were difficult to obtain. These conditions brought quite a lot of business and money into this town.”

Optimism was a good word to use to describe the attitude of Effingham County residents during the last part of the Great Depression because when tied to the New Deal programs found in the area, “the oil boom prevented hunger while ushering in a new prosperity,” and another marvelous part of the county’s great heritage.