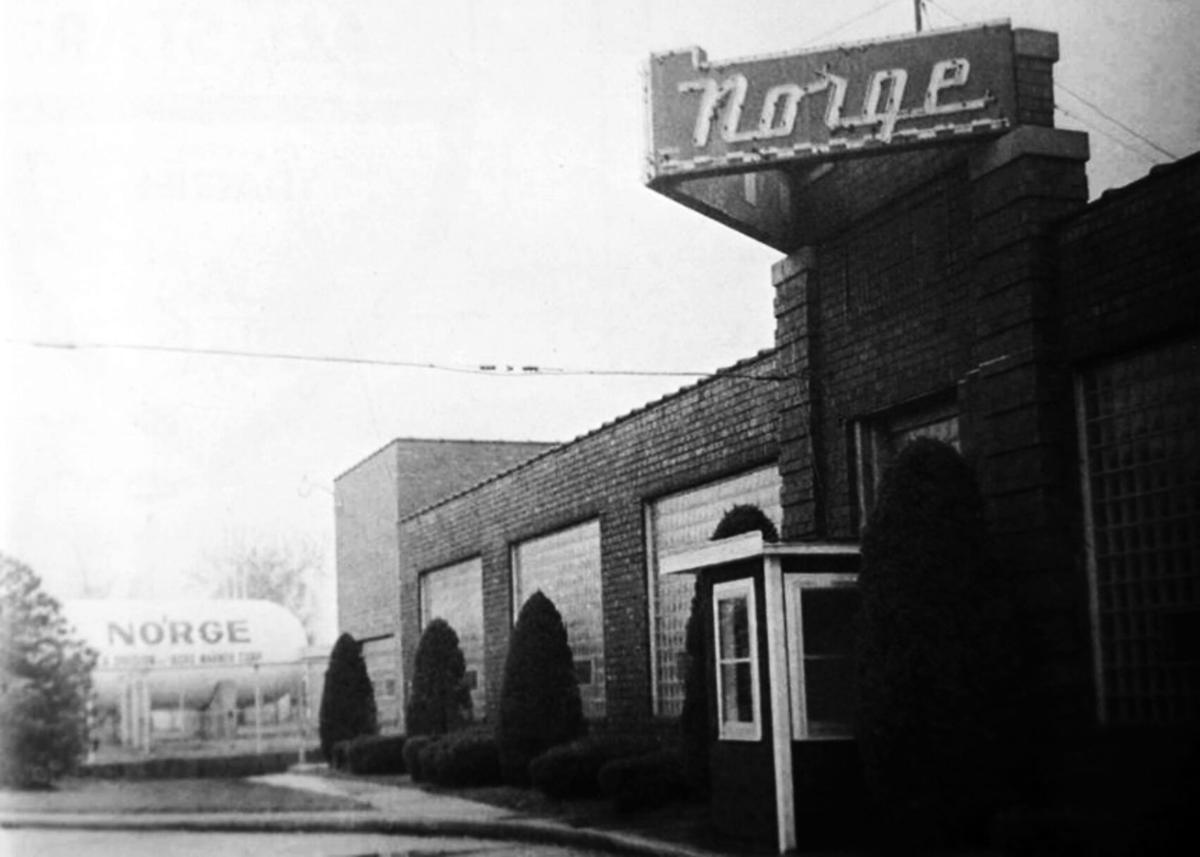 Effingham Norge building with tank in background is shown. 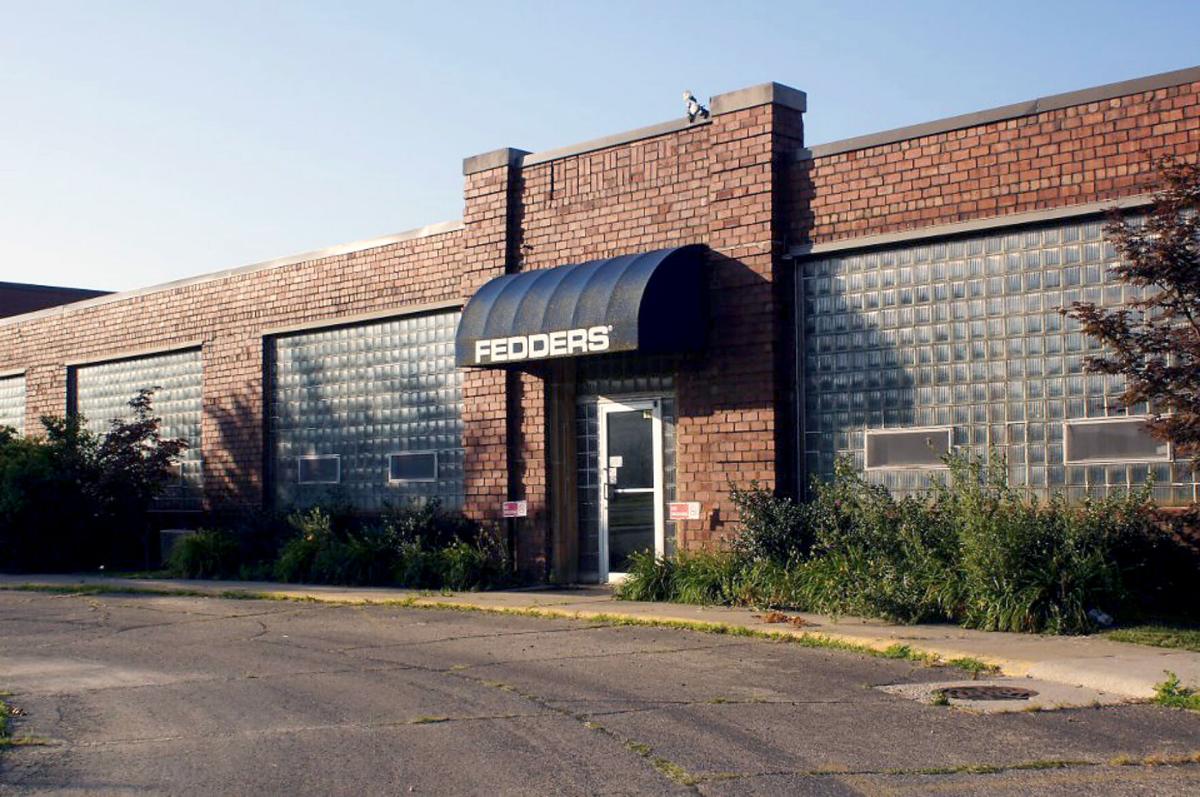 Fedders building in Effingham is shown after it closed. 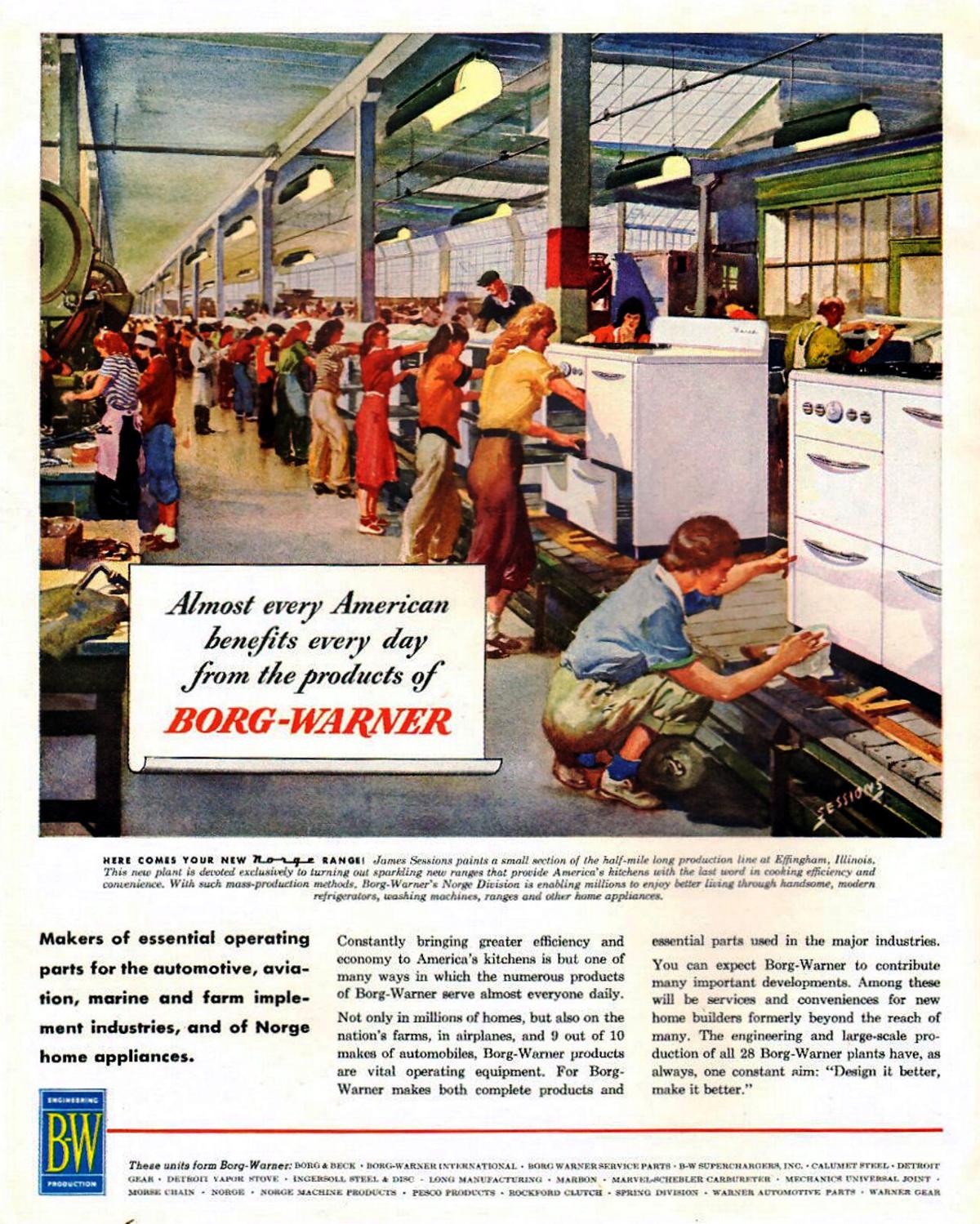 This 1946 ad features Range Line at Norge in Effingham. 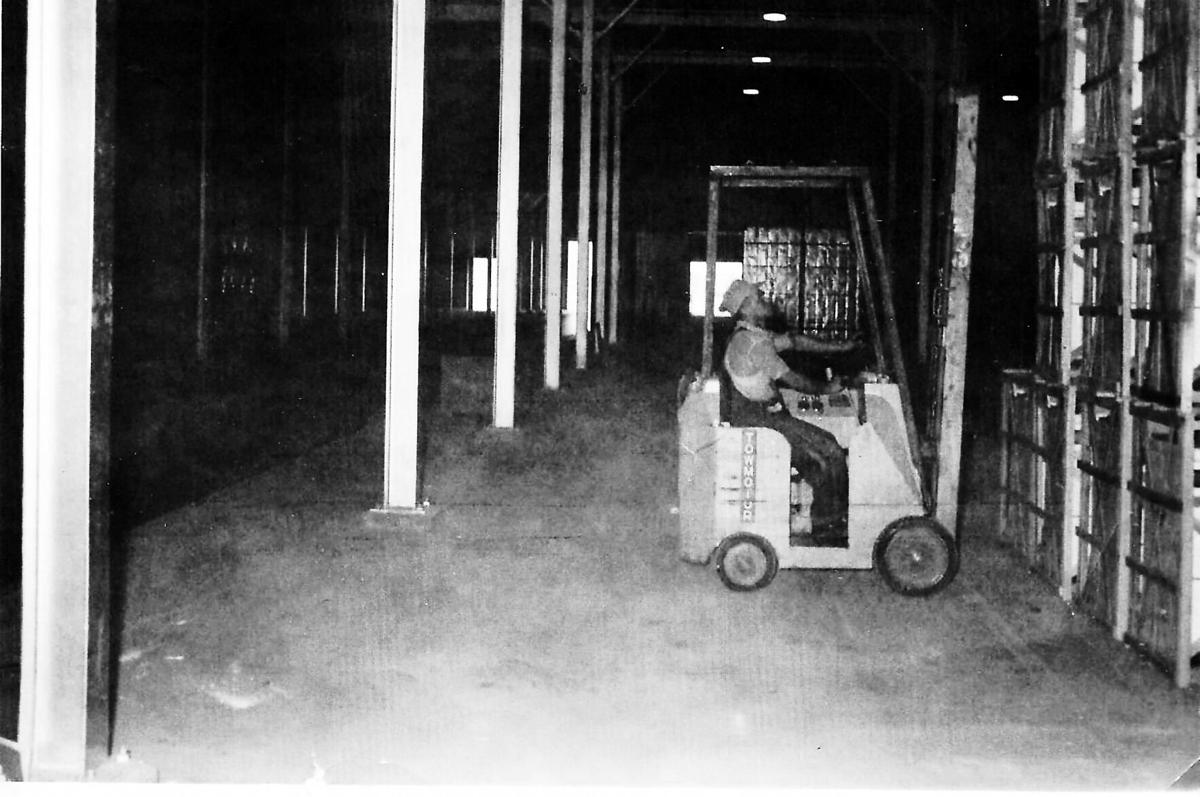 Walter Kirchhofer, a jeep driver at the warehouse at Norge in Effingham, is shown in 1960. 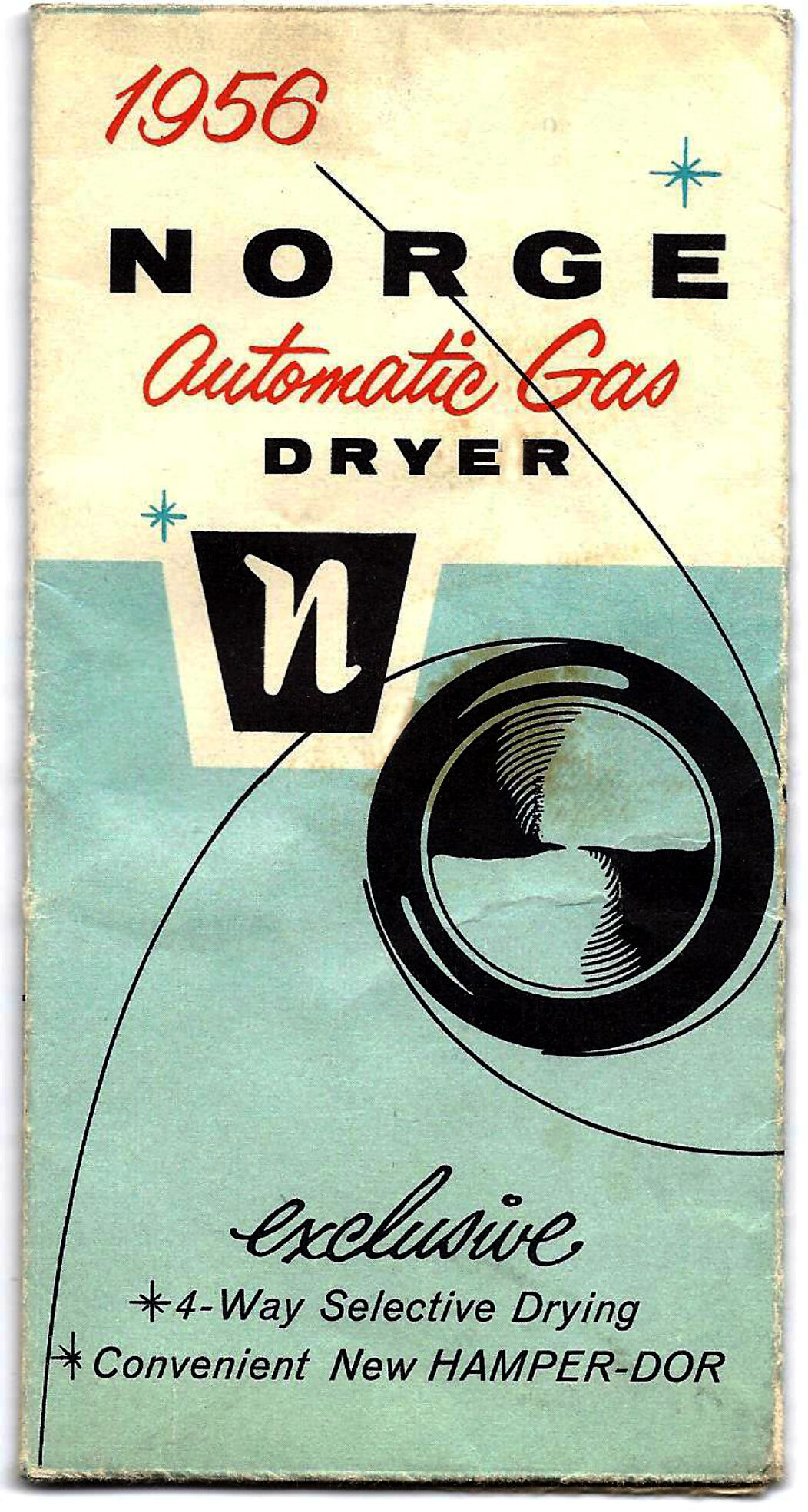 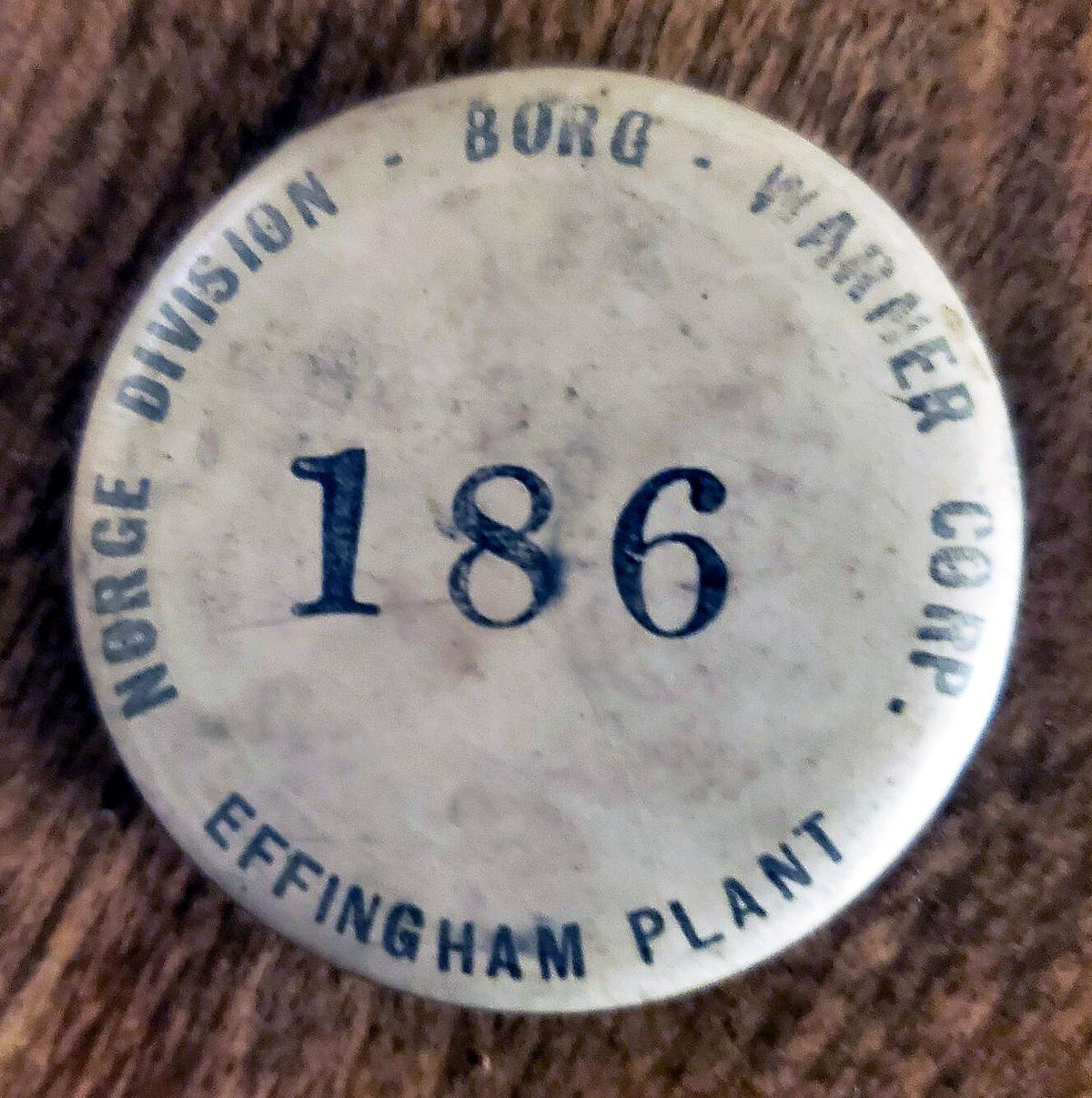 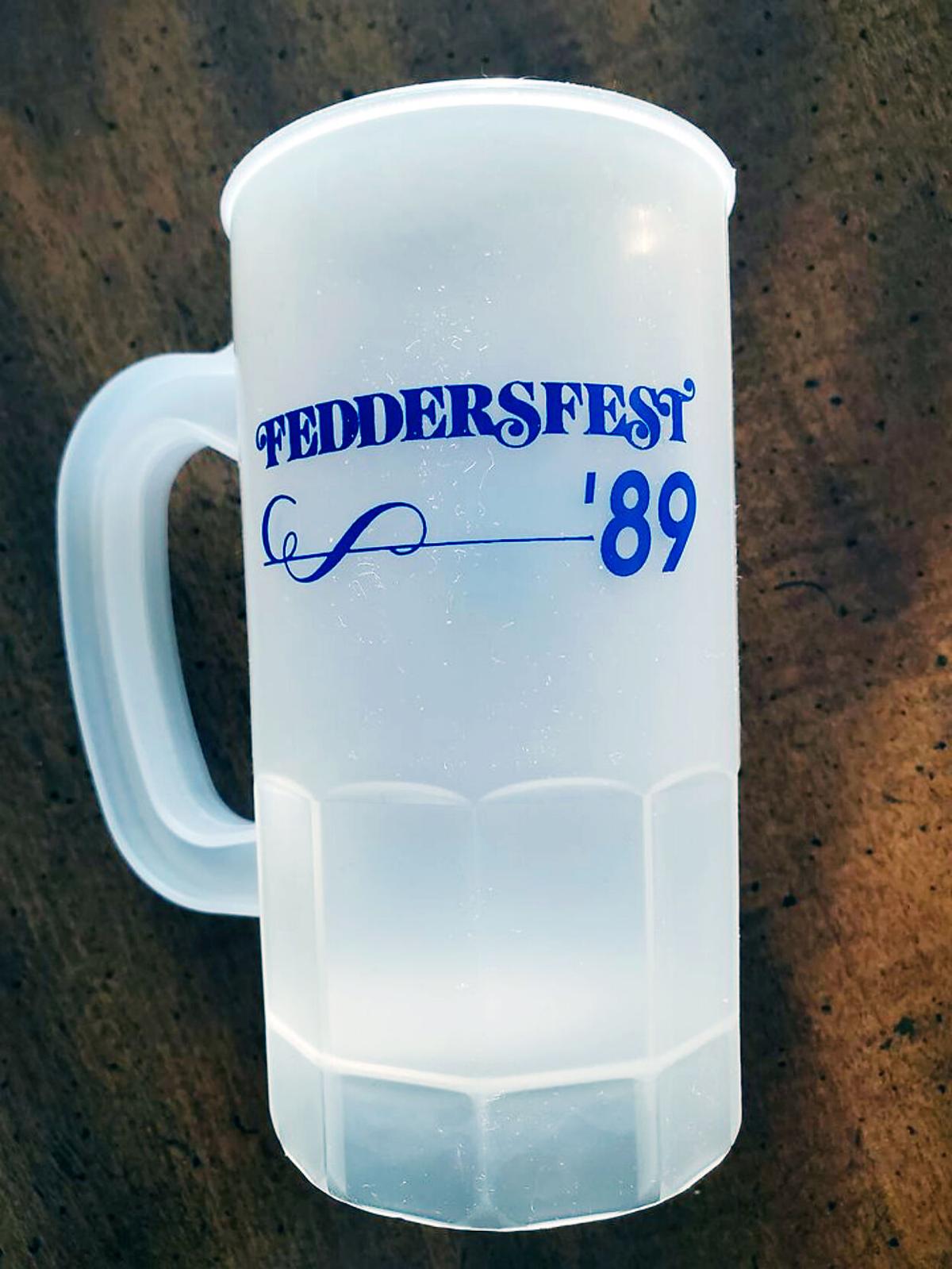 A mug from FEDDERSFEST 1989 in Effingham is shown. 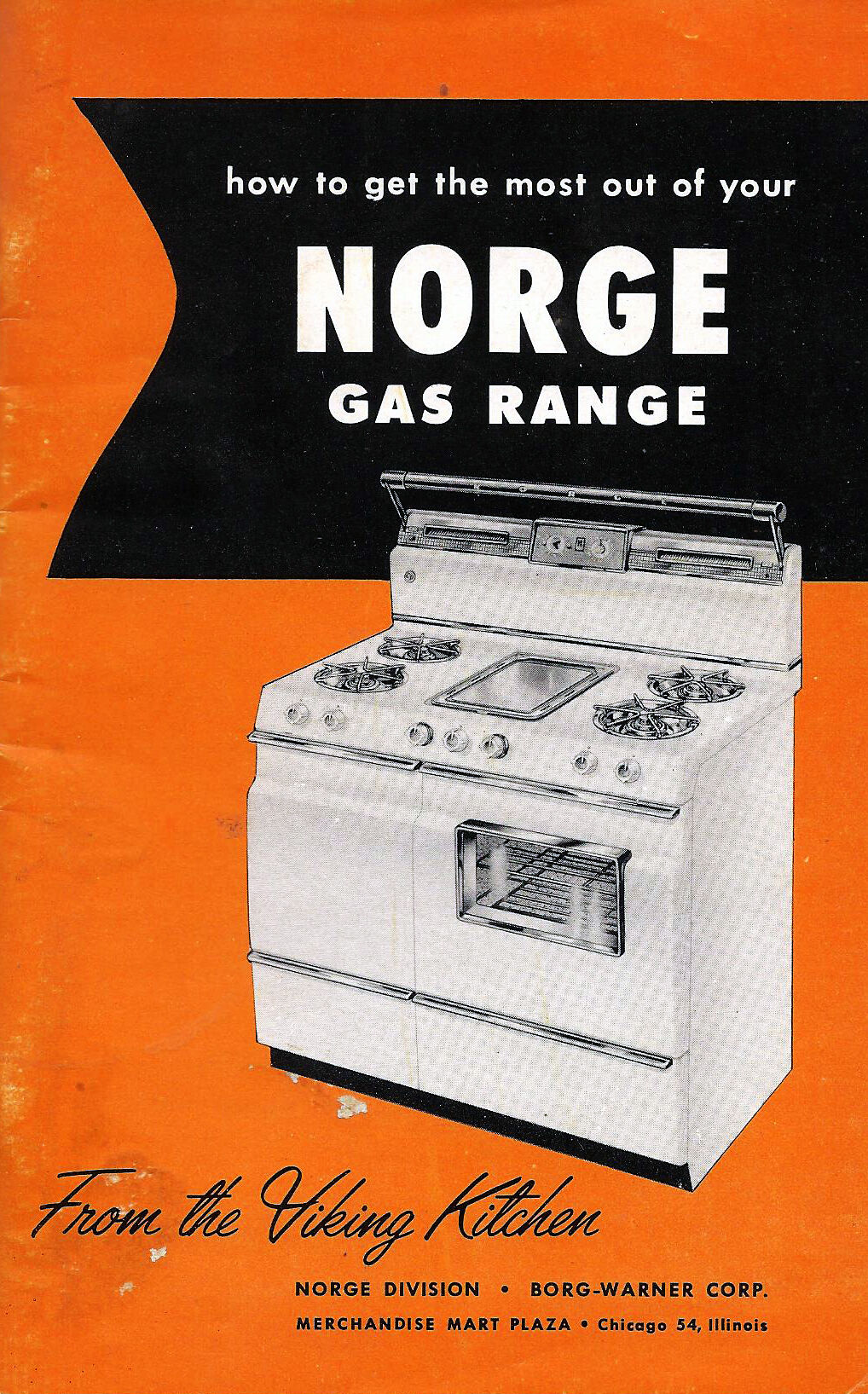 Effingham Norge building with tank in background is shown.

Fedders building in Effingham is shown after it closed.

This 1946 ad features Range Line at Norge in Effingham.

Walter Kirchhofer, a jeep driver at the warehouse at Norge in Effingham, is shown in 1960.

A mug from FEDDERSFEST 1989 in Effingham is shown.

One of my jobs at the museum is that I enter all of the accessions in the computer. It is a very time-consuming job but I get to see all of the items that have been donated to the museum. I am always slowed down because there are usually memories triggered by handling all of these different items.

Back in September, I took in a collection and many of the items had to do with Norge and Fedders. I was fascinated with these items because I know that Norge/Fedders played an important role for many people in Effingham County and in surrounding counties. Most of the items pictured are from the same collection of Walter Kirchhofer and came to the museum via his daughter, Mary Miller.

Let’s start with the company that came before Norge. The Vulcan Corporation owned a building and warehouses on Wabash Street. That plant was commonly referred to as Vulcan Last and they made wooden heels for shoe companies. Vulcan Last employed several hundred people when they closed the Effingham plant in the 1940s. About 100 employees were transferred to their location in Teutopolis but the bulk of the jobs went to Ohio. Now there was a large building with warehouses available and ready to be purchased by another company.

In 1944, the Norge Division of Borg Warner purchased the Vulcan Corporation building on Wabash Street. Effingham was a desirable location because of the building’s access to the railroads and highways located in Effingham. This plant would also be a union plant in Effingham, giving the employees a chance to bargain for better wages. The company headquarters for Norge Borg-Warner were in Chicago.

The Effingham Norge Division of Borg Warner added a 24,000-square-foot warehouse in 1945. It also completed the final production of the Forward Shroud that was made for the Republic P-47 Fighter planes used in World War II. In 1945, they also started making electric ranges.

I have included a picture of a colorful magazine ad about the electric ranges that appeared in 1946. Since it would be too hard to read what it says at the bottom of the ad, I have typed it out entirety.

“Here comes your new NORGE range! James Sessions paints a small section of the half-mile long production line at Effingham, Illinois. This new plant is devoted exclusively to turning out sparkling new ranges that provide America’s kitchens with the last word in cooking efficiency and convenience. With such mass production methods, Borg-Warner’s Norge Division is enabling millions to enjoy better living through handsome, modern refrigerators, washing machines, ranges and other home appliances.” As you can see, there were a lot of women who built those ranges because many of the men were still finishing up their service in World War II.

Here is a recipe from one of the little booklets that came with a new range.

Cream sugar and butter. Add sour milk with soda dissolved in it. Add 4 cups of flour (reserve the 5th cup to roll out the cookies) sifted with the baking powder. Add eggs and vanilla. Roll thin and bake in 375 degree oven 10 to 15 minutes.

Throughout the years, more warehouses and offices were added. Also, other products were introduced. In 1953, the company built the first gas and electric clothes dryers in the Effingham Norge plant. In 1955, the Effingham Norge plant produced the first “built-in” range. More and more warehouses and storage rooms were added and the plant grew and grew.

The completion of Interstates 57 and 70 through Effingham led Norge to start shipping more of their products by semitrucks instead of by railroad. A 20# dry-cleaning machine was built in 1965. That same year Norge had the honor of installing the first computer system in Effingham. It was an IBM 1440 disc-type system.

In 1966, the Room Air Conditioner line was moved from Ft. Smith, Arkansas, to the Effingham plant. By the end of 1966, with the most recent additions, the Effingham Norge plant had 585,929 square feet and was the largest employer in Effingham. In 1968, the plant was bought by the Fedders Corporation.

Fedders did receive help, and in 1989 Fedders modernized its largest manufacturing plant in Effingham. To celebrate this achievement, an event called FEDDERSFEST ’89 was held for the employees at the Effingham County Fairground. By 1995, Fedders was still focusing on room air conditioners at the Effingham plant and a plant in Columbia, Tennessee.

In 2001, Fedders moved most of its manufacturing plants to China. The majority of the employees were let go at that time. Some remained to refurbish the air conditioners made in China. In 2003, Fedders filed for bankruptcy and the plant closed for good. It had started in 1944 as Norge Division of Borg-Warner and ended as Fedders. This plant had an almost 60-year run.

Those are the statistics about Norge/Fedders but they don’t tell the full story. What I remember are so many in my neighborhood made their living by working at Norge/Fedders. I remember the cafes that were near the Effingham plant where so many of the workers would go to eat on the days they didn’t bring their metal lunch box and thermos to work.

Southtown Café at the corner of Wabash and Banker drew big crowds as did L & M Café farther south on Banker. My favorite one was Opal’s Cantina, because I went there with my Dad when he delivered Heath Dairy’s milk and ice cream. While Dad wheeled in the order, I got to sit there and drink a chocolate milk and talk to Opal. These little cafes catered to the workers, and the workers greatly appreciated the good service they received there.

When I look at the badges that most of the men wore on a hat, I remember how proud my uncle was of his badge and working as a tool and die man at Norge. Lots of the employees were able to buy their first house, first car, first washing machine, new stove, and so many other things because of their job at Norge. Norge put food on the table and paid the bills.

When you got a new stove from Norge, it came with a booklet that told all of the features of the new stove and had lots of new recipes to try out. This was the first time many housewives learned how to use a broiler or enjoyed a built-in griddle on the deluxe model range from Norge.

A new automatic washing machine was a great improvement over a wringer washer. I remember how excited my mom was when she traded her old wringer washing machine in for a new automatic washer. However, the ultimate prize, in my opinion, was the automatic dryer. Hanging clothes on the line in good weather wasn’t too bad, but on cold, windy winter days it was no fun hanging clothes out. Even worse was trying to bend the frozen clothes so they’d fit in the laundry basket when it was time to take the clothes off of the clothesline. A Norge electric dryer was well built and made life much easier.

Before room air conditioners were available, people had huge fans that were supposed to cool the house down. As a kid, we had a big window fan downstairs and one upstairs. They moved air over you but those fans did not get rid of the humidity. A window air conditioner made sleeping on a hot summer’s night a lot easier. The ones that Fedders made were sold under the names Fedders, Airtemp, and Emerson Quiet Kool. We had an Emerson Quiet Kool and it was worth every penny my parents paid for it.

Out of curiosity, I put Norge and then Fedders into my search for the Word program in which all of my Effingham County veteran write-ups are located. I wasn’t surprised when I found 48 veterans who had worked at Norge or Fedders. For some of them, it may have been for just a short time but others worked many years there and retired from either Norge or Fedders. I am sure there are many more veterans who worked there but these are the ones where Norge or Fedders was included in their military write-up. If you know of others, please contact me.

You see, when you donate something to the museum you’re helping us to recreate memories of Effingham County one picture, one place and one person at a time. And we do appreciate that, because we are in the business of recreating memories for all of you.

If you have any Effingham County veterans who you would like added to the military binders or old school pictures or any old pictures from Effingham County, you can email me at janeries55@gmail.com or call me at 217-821-2427. Please take care of yourself and stay safe. I wish you all a Happy Thanksgiving wherever you may be!