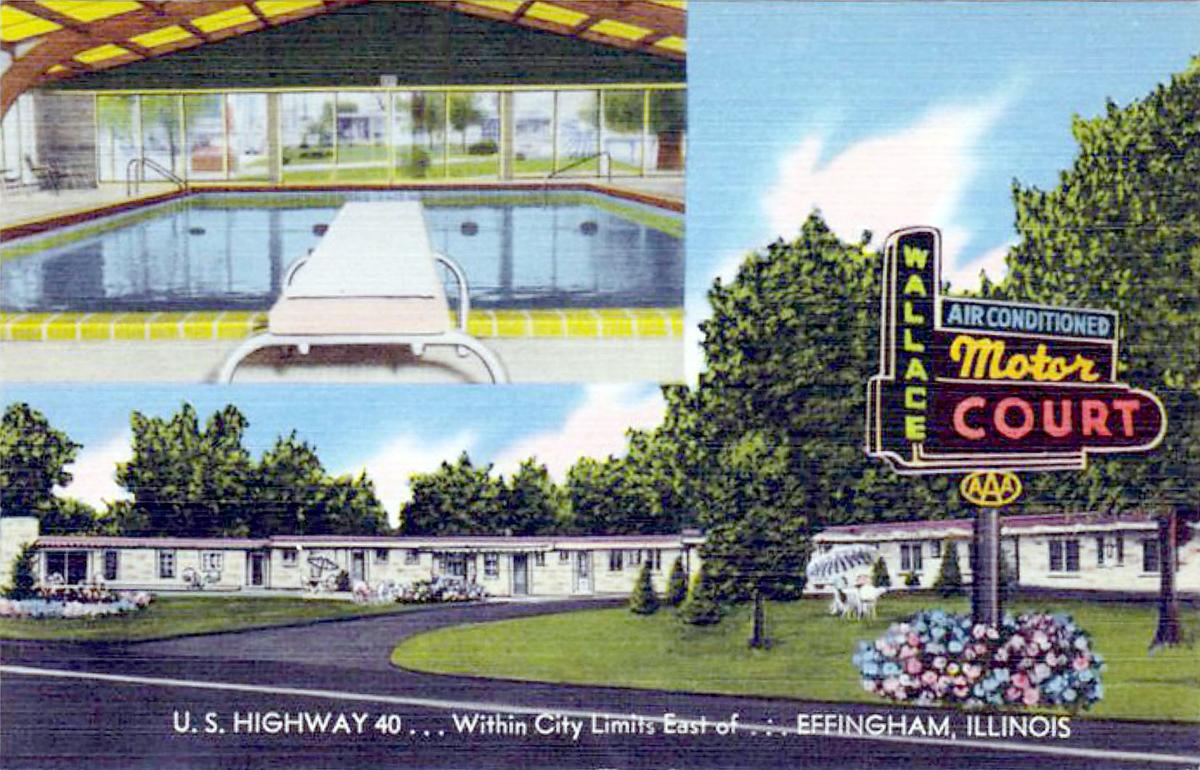 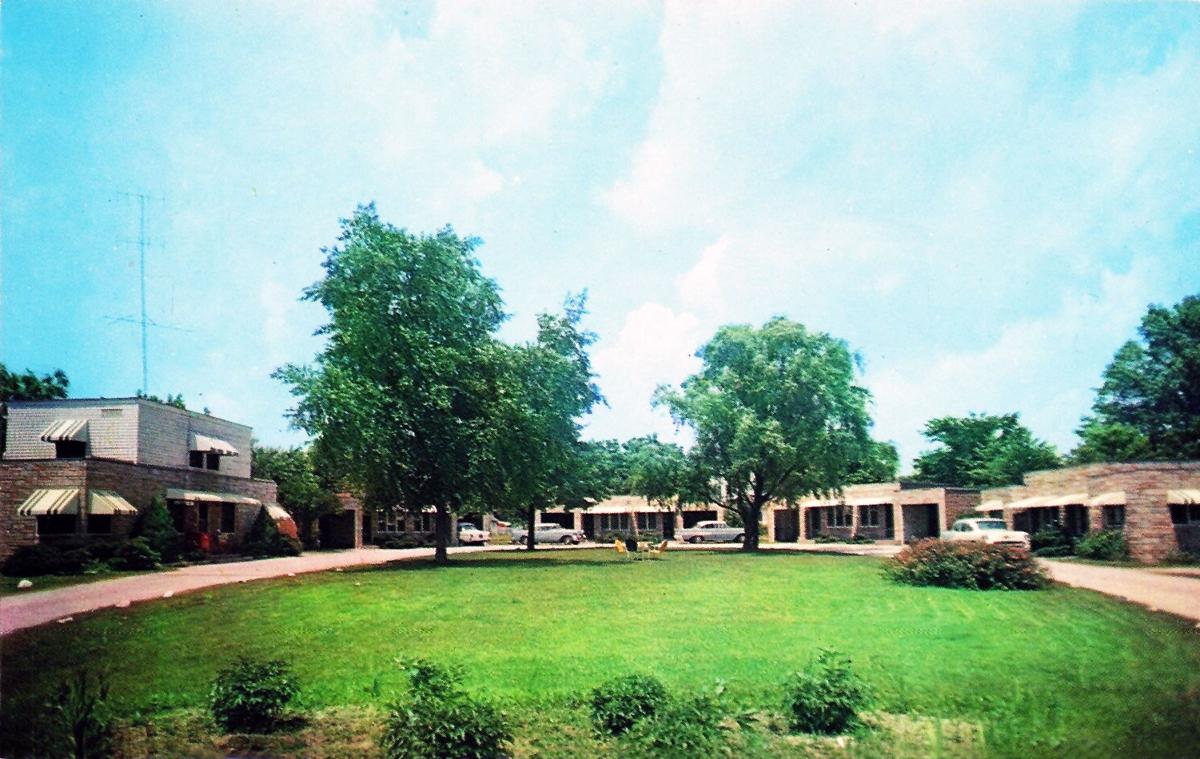 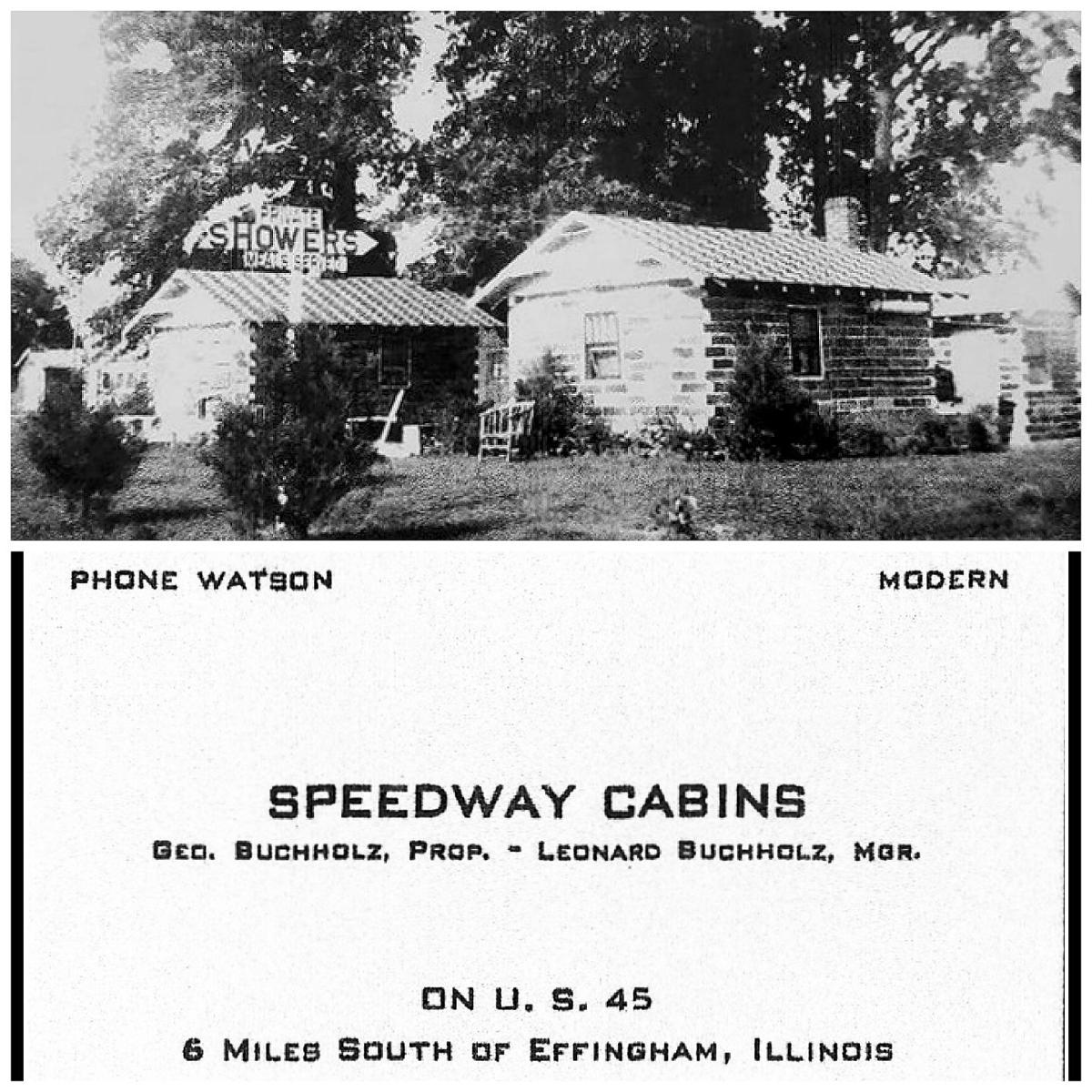 Speedway Cabins and Business Card. The cabins were located 6 miles south of Effingham. 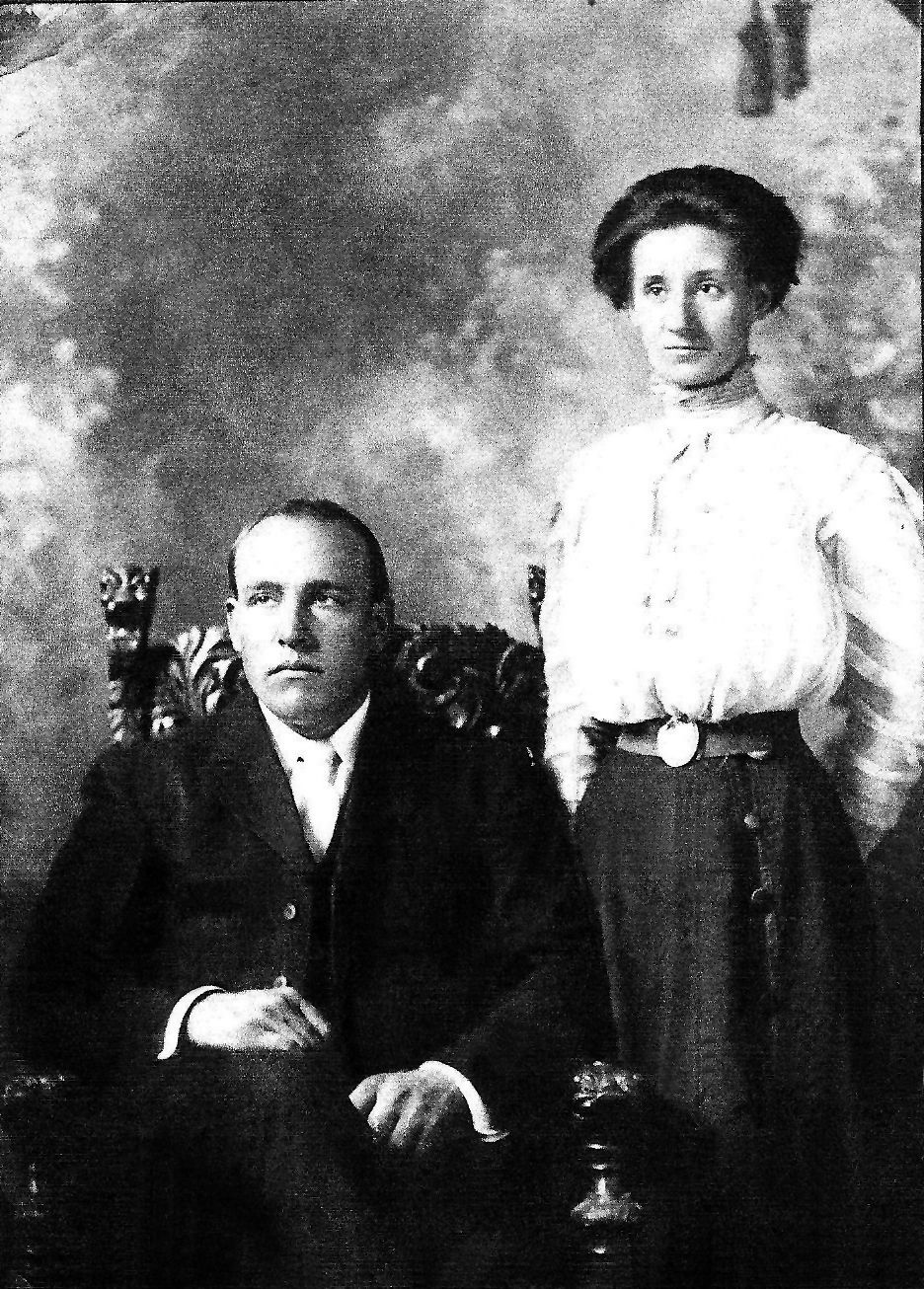 George and Mollie Buchholz on their wedding day. 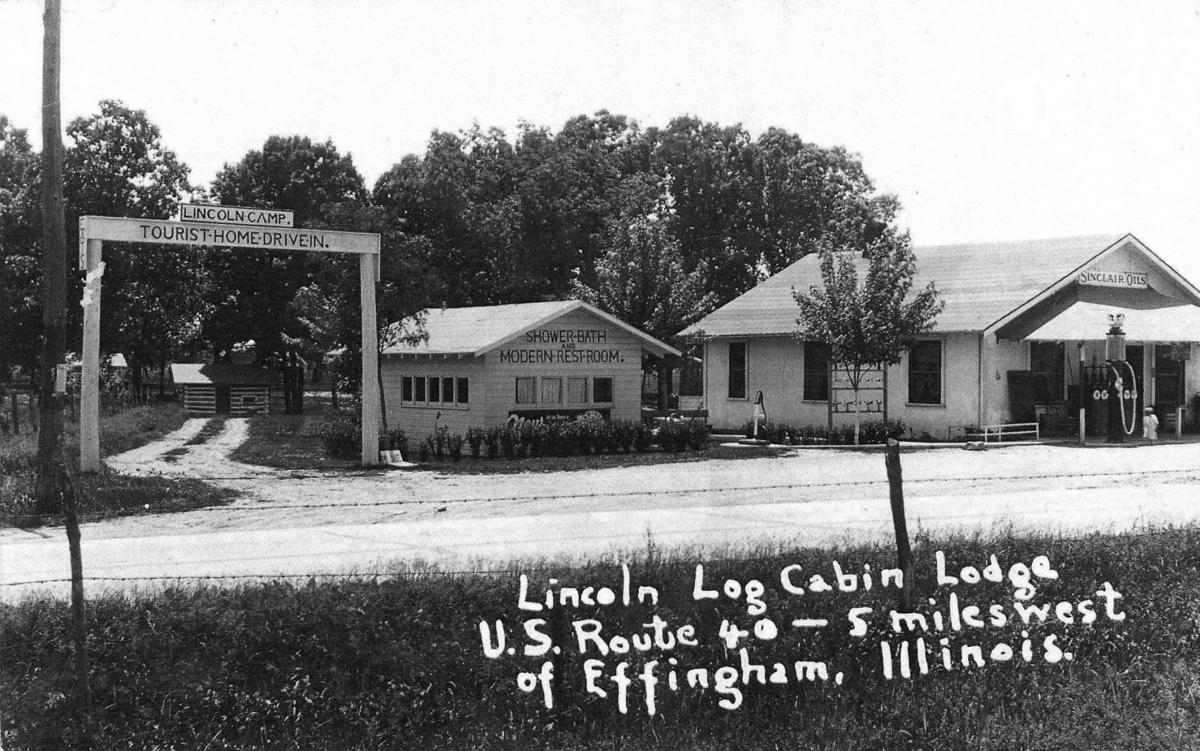 Lincoln Log Cabin Lodge on Route 40 between Effingham and Altamont. 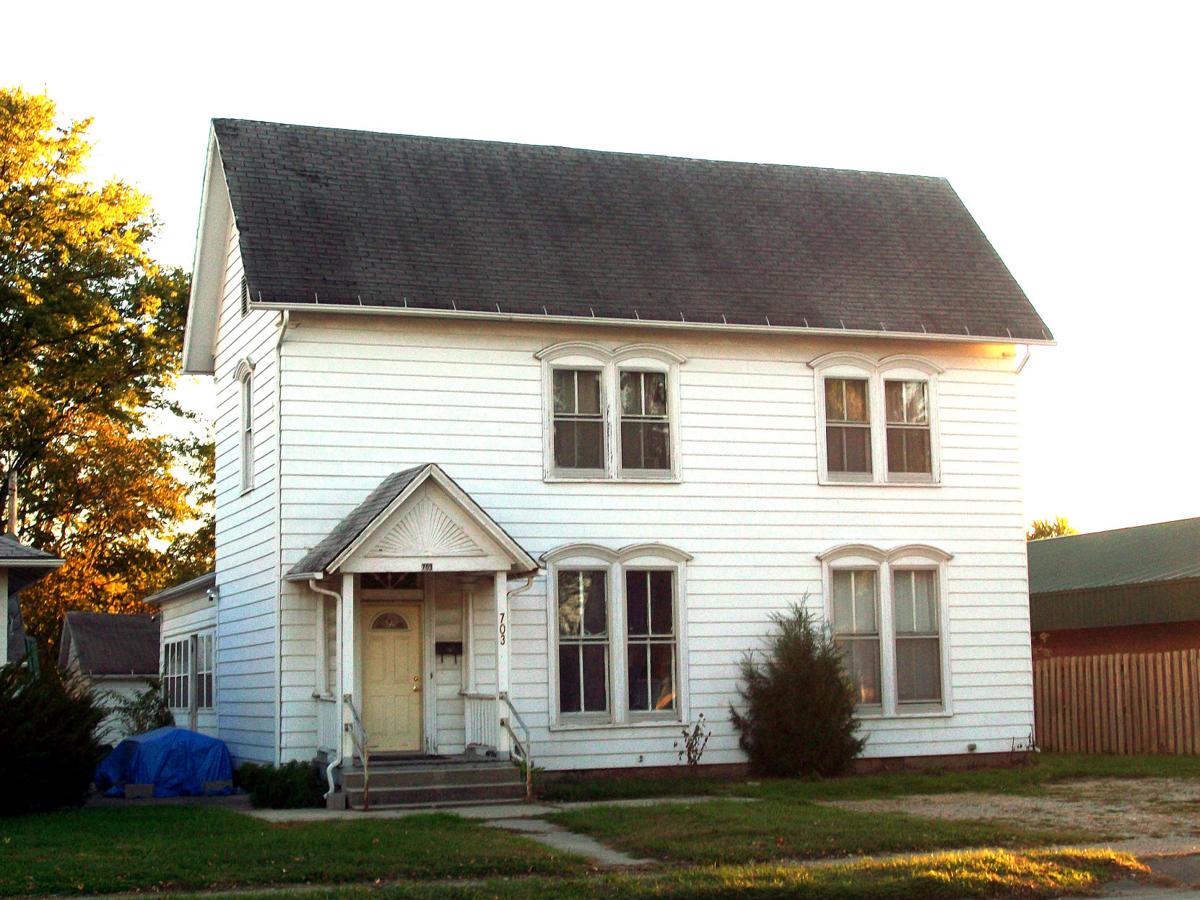 Speedway Cabins and Business Card. The cabins were located 6 miles south of Effingham.

George and Mollie Buchholz on their wedding day.

Lincoln Log Cabin Lodge on Route 40 between Effingham and Altamont.

Two important developments for Effingham County were the building of “hard” roads and the automobiles that brought travelers on those new “hard” roads.

Because of so many travelers, enterprising people started building places for these travelers to stay all night as they traveled on the “hard” roads. Effingham County saw the building of places for tourists starting in the 1920s. This also started the building of service stations, and often they were near the tourist courts or motor courts.

George Buchholz and Mary “Mollie” Westfall were married in 1909 and lived six miles south of Effingham on what is now Route 45. George was a carpenter and was well-known for making furniture. They owned and operated Speedway Furniture as well as another business they started that is featured in this article.

On what was then called Route 29, the Buchholz family opened a place with cabins for travelers. They called it Speedway Tourist Court and it was owned and operated by George and Mollie Buchholz. George put his carpenter skills to work as they built this tourist court. Later, their son Leonard managed the cabins and George was listed as proprietor.

Speedway Tourist Court was among the first tourist court between Michigan and Arkansas to have bathrooms. George built three cabins named Liberty Bell, Hollywood and Mayflower.

The cabins were 14-by-18 feet and contained two beds, two dressers, a hot plate, sink, heating stove, and a bathroom with a shower. The indoor plumbing complete with a shower was a real draw for tourists looking for a place to stay.

In 1939, the average income in the United States was $1,368 and unemployment was 18%. We were still in the grips of the Depression. Records show that the Buchholz family earned $1,363.45 in 1939 from their tourist cabins. The Buchholz family were right there with the average income. The last information we have on income from Speedway Cabins was in 1947 and it totaled $2,191.56.

There was another set of tourist cabins but they were located on Route 40. They were named the Lincoln Log Cabin Lodge. They also advertised “SHOWER – BATH AND MODERN REST ROOM.” This tourist camp also had a gas station on the premises, Sinclair Oils. This place was located five miles west of Effingham. The cabins have long since disappeared but the last I knew, the building that held the gas station was still standing.

In later years, as more and more people were traveling on the roads, more places for travelers were built. There were quite a few in the town of Effingham. The amenities offered grew as they sought to be the place that caught the tourist’s eyes.

One of them was the Midway Tourist Court. It was located at 712 East Fayette Avenue. In a 1961 ad, it advertised the following: SALESMEN INVITED, LOCATED IN TOWN, TELEPHONE IN EVERY ROOM, AIR CONDITIONED, FREE TV IN EVERY ROOM, SPECIAL RATES TO BUSINESSMEN, SINGLES, DOUBLES, AND FAMILY UNITS, RESTAURANT ACROSS THE STREET, GARAGES, PETS ACCEPTED. The managers were Mr. and Mrs. Ruderman and the phone number to call was 1482.

Another motor court located on Fayette Avenue in Effingham was Wallace Motor Court. In a 1961 ad, it lists Ken Huston as the owner and the number to call for reservations was 1480. Wallace Motor Court was located at 900 E. Fayette. It billed itself as “One of Effingham’s Finest” and advertised the following: CARPETING, AAA RECOMMENDED, REASONABLE RATES, FREE TELEVISION, 2 MINUTES TO DOWNTOWN EFFINGHAM, AND HEATED SWIMMING. I swam in that heated indoor pool many times and that was a real treat on a cold winter’s day! This motor court was located where Al’s Tire Mart is now located.

There were also tourist homes in Effingham. These were private homes that would be rented to tourists. When I was a kid riding my bike down the sidewalks on Fayette Avenue heading to the old Central school, I’d pass a house with a sign in front that said “Ranes Tourist Home”. That was about 1965, and Mrs. Ranes rented rooms to tourists. In the 1984 obituary for Letha Ranes, it stated “She was the retired owner of Ranes Tourist Home.” This house still stands on Fayette Avenue in Effingham.

As both the roads and cars got better, these tourist courts and motor courts started to disappear. The building of the interstates changed things for tourist courts and motor courts. When Effingham had three interchanges built for Interstate 70 and Interstate 57, people saw a chance to build motels, restaurants and fast-food places near the interstate. Motels, hotels, restaurants and fast-food places soon began to fill up the areas around the interchanges.

That sounded the death knell for many of the small tourist courts, tourist homes and motor courts. People wanted to stay close to the interstate so they could move on quickly to the next place. So, the hard roads first brought business to the tourist courts, tourist homes, and motor courts and then the bigger interstates took the business away. But at least with the Effingham County Museum page, we can learn (or remember) the way it used to be.

The Effingham County Museum opens again in March. We are busy working now on new displays. Upcoming events for the museum are our final two lectures: “Austin College” on Feb. 13 (Delaine Donaldson) and “Old St. Anthony Hospital – Before the Fire (Linda Ruholl) on March 12. The lectures are held at 7 p.m. on the second floor of the museum.