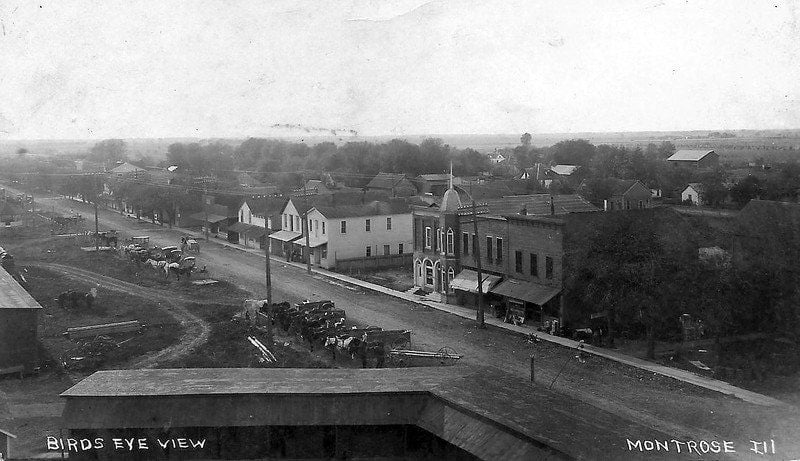 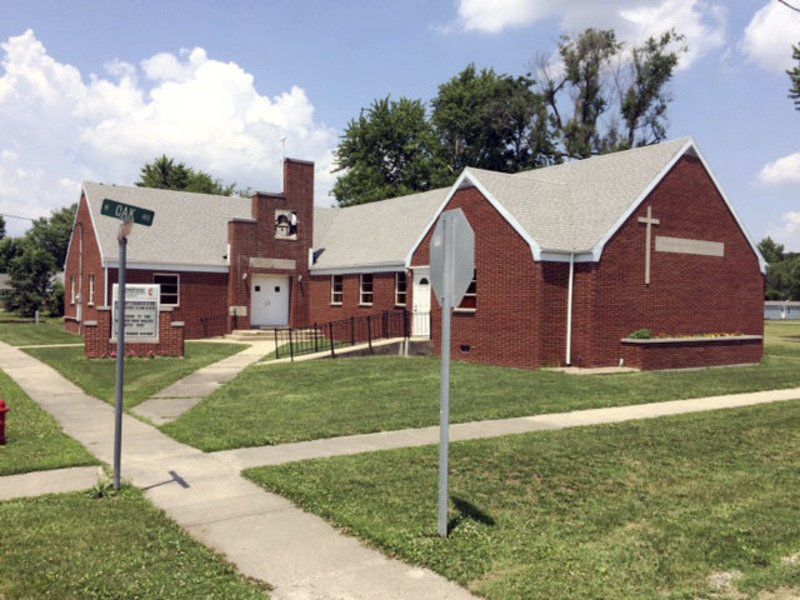 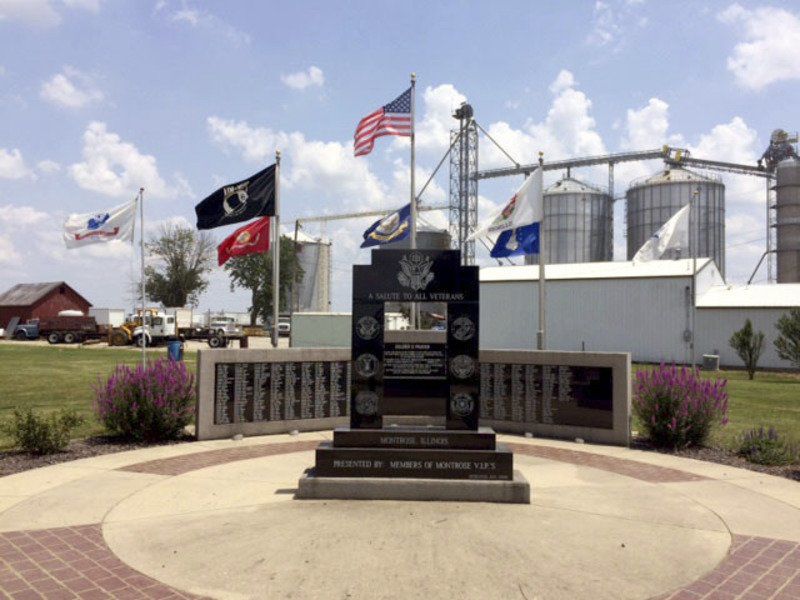 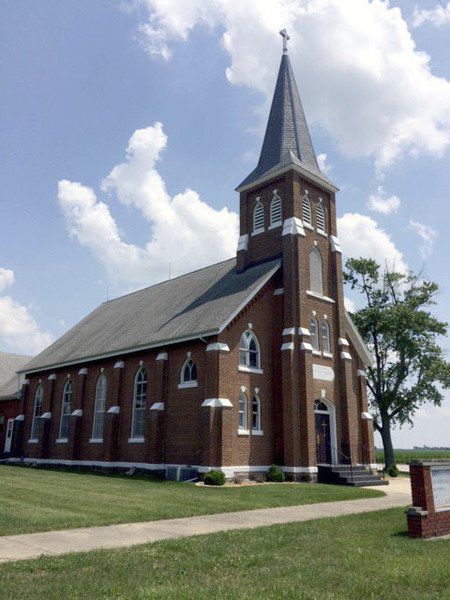 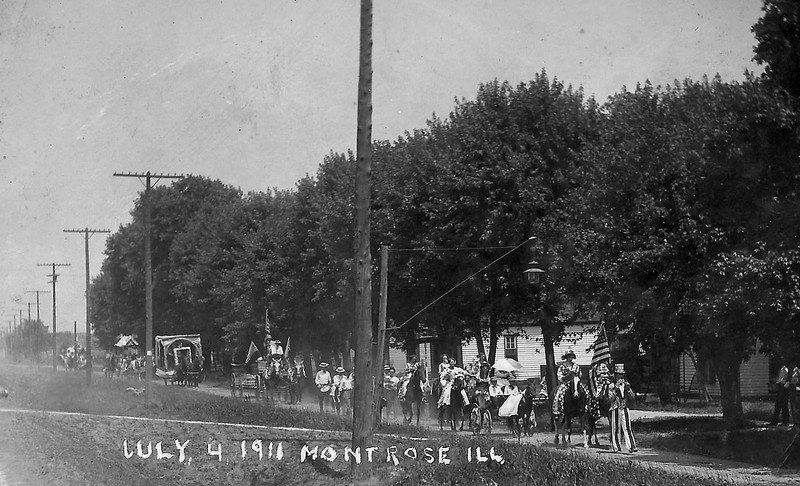 Fourth of July parade in Montrose in 1911. 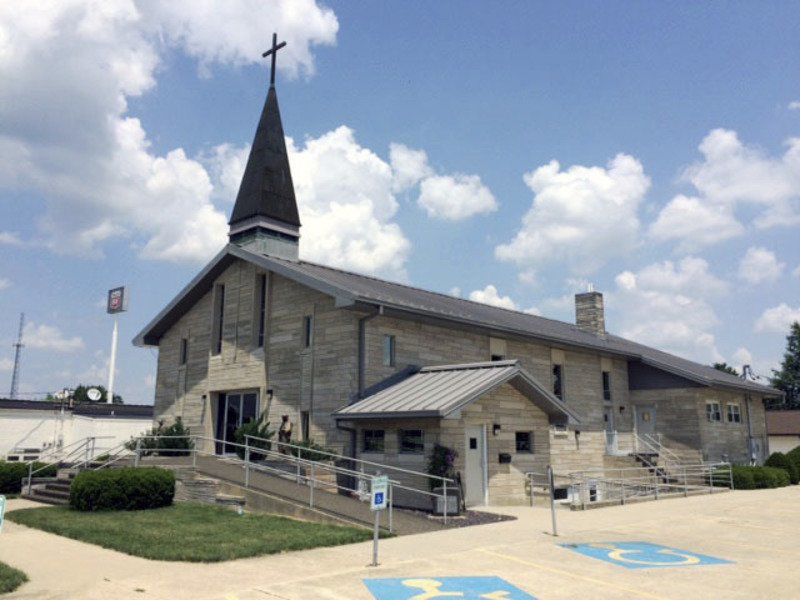 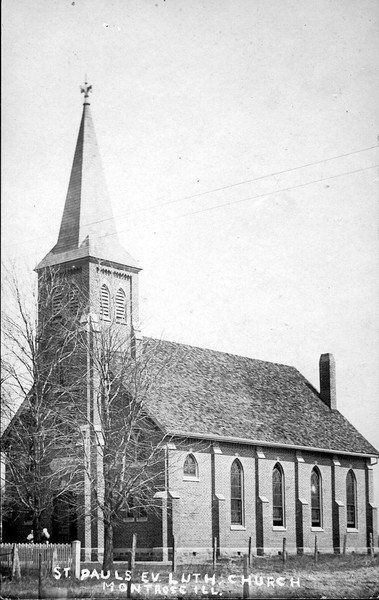 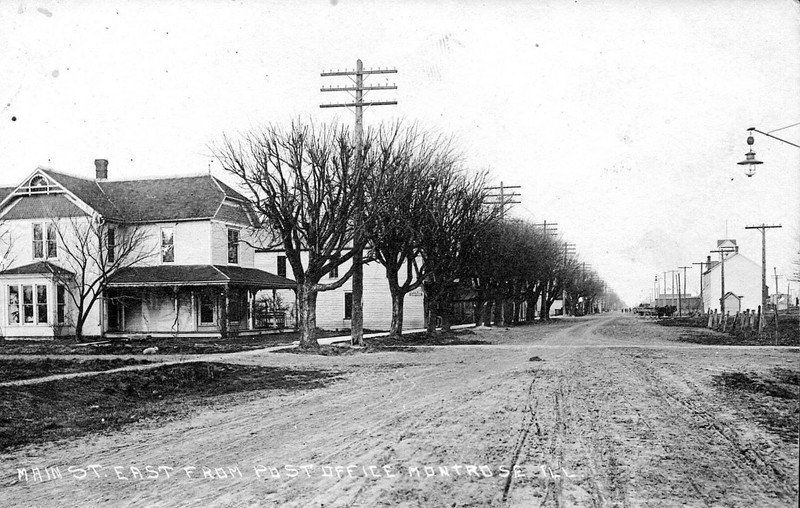 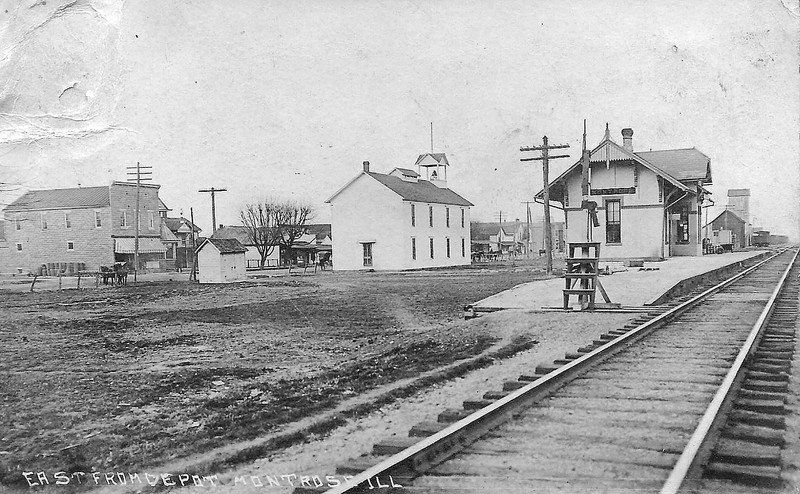 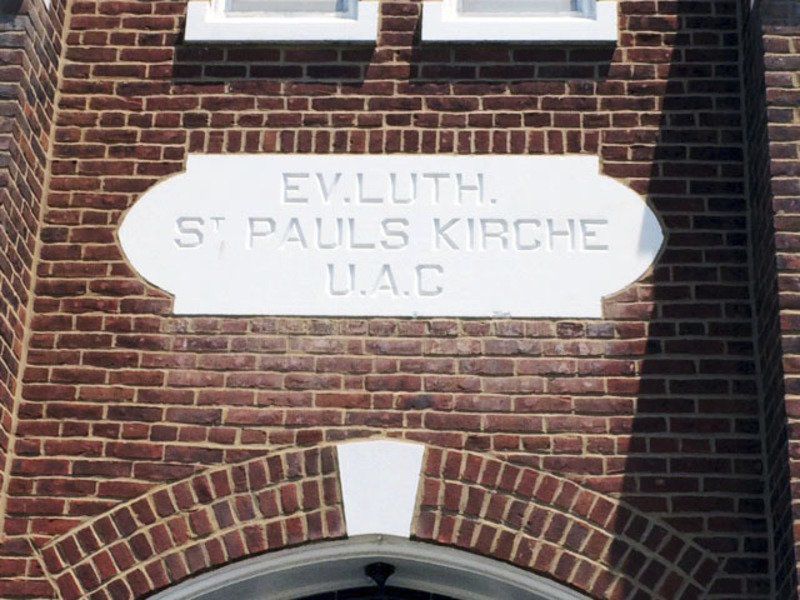 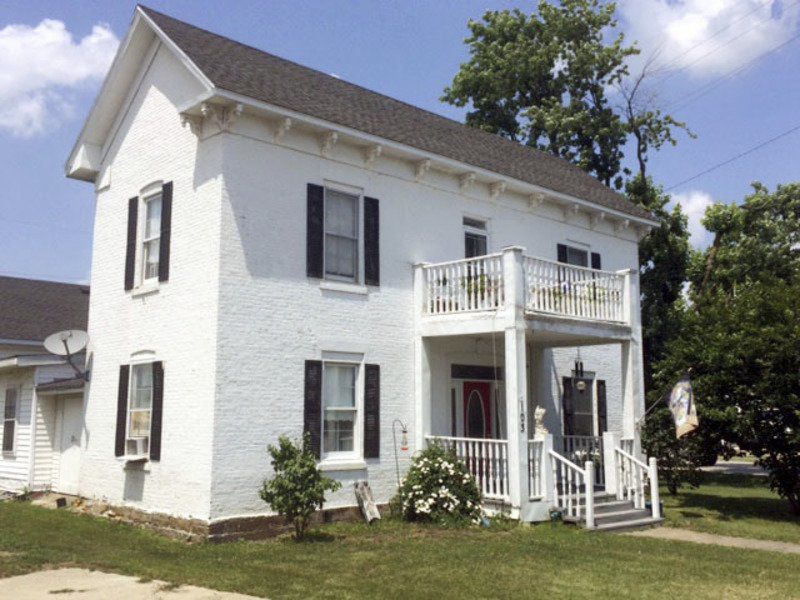 Fourth of July parade in Montrose in 1911.

As I chose the Village of Montrose to write about, I explored its history in the booklet "Montrose Centennial: 1870-1970."

I couldn’t find where or how it received its name. I searched the Internet and found that the noble name Montrose is of medieval Scottish origin based on the coastal Scottish town of Montrose situated between Aberdeen and Dundee. The derivation of the name is from the French word “Mont” meaning “mountain” and “rose” meaning the flower, or perhaps the color. In another citation, James Graham was the first Marquess and fifth Earl of Montrose. He was a Scottish general noted for his victories in Scotland for Charles I of England in the English civil war there. Charles I had attempted to impose the Episcopalian Book of Common Prayers upon the reluctant Scots. Graham earned the title “The Great Montrose” for his military efforts. He was also a poet and nobleman. Graham was later captured by the Scots, hanged, and beheaded. His head was placed on a spike of the St. Giles Cathedral in 1650. His body was later exhumed and reinterred with his head in St. Giles Cathedral in 1661.

I’m not certain how the Village of Montrose acquired its name, but the history behind the name is noteworthy. Perhaps a local resident had Scottish ancestry. There are also towns by that name in a suburb of Houston, Texas, and Colorado.

It was designed to forge a critical transportation link between East Coast cities and the wild western frontier of the Appalachian Mountains and beyond. In the book "A Guide to the National Road," the Road was obsolete and premature at the time of its creation. It was obsolete because of the emergence of railroad technology and transportation. It was premature because the automobile had not yet been invented. When the automobile was mass produced by companies like Ford and the Road conditions improved with brick or concrete paving, America began its love affair with the car to go places in America that were then accessible. The Road passes through seven Illinois counties from Marshall to East St. Louis. Today it is 164 miles in Illinois from the Indiana border to the Missouri border. The old Vandalia Railroad line ran through Montrose. It became the Pennsylvania Railroad around 1868. The National Road kiosk in Montrose in front of village hall is titled “Drummers. Drays and Railroad Days”.

Early settlers found places to live near Montrose while traveling along the National Road. One such pioneer was Abraham Marble who came about 1845. He kept a relay house for several years for the stagecoaches. Marble farmed later east of Montrose until 1858 when he sold everything and moved his family to Minnesota. Other early settlers included William Wallace, Thomas Gibbon and James Rolfe from 1849 to 1851. Mainly German Roman Catholics from Westphalia and Oldenburg and Lutherans from Saxony migrated to settle the area around Montrose.

J.B. Johnson laid out the Village of Montrose around July 19, 1870. The plat for the town was done by Calvin Mitchell, the Effingham County surveyor. By 1890, there were six general stores, two saloons, an implement store, blacksmith, flour mill, and hotel. Local legend has it that the Birch Gang operated in the Montrose, Spring Point and Teutopolis area. They robbed people traveling along the National Road. They also frequented the taverns in Montrose and Teutopolis to listen to conversations as to which farmers had recently sold livestock or grain and had cash. They would then rob them. Allegedly, the gang buried large sums of money in glass jars sealed with beeswax in the Montrose area. As the legend goes, some local townsmen and farmers grew tired of the gang’s activities and took matters into their own hands. They allegedly found the robbers and killed all of them. The bodies were never found, and the robberies stopped. Some people speculate that the bodies were dumped into local hog pens and the hogs disposed of the bodies.

Philip Wiwi was born in Speisbach Bavaria, Germany, in 1833. He came to America in 1852 and settled in Indiana, where he married Magdelena Meyer in 1857. They had 11 children. He began farming at Spring Point. Wiwi then moved to Teutopolis and entered the mercantile business. Wiwi wasn’t able to purchase a parcel of land in Montrose for his own store, so he built his own store six miles east of Montrose. There he purchased mostly local farmers’ goods and livestock and became one of the wealthiest men in Effingham County. He also erected a grain house and opened a livestock market. His brick home is still located at the intersection of Route 40 and Route 121.

He and his wife later moved to Effingham, where he became interested in Illinois politics serving as a representative in Springfield for one term. Wiwi and his wife, Magdelena, were buried in the St. Rose of Lima Cemetery in Montrose and later reburied in St. Anthony Catholic Cemetery in Effingham.

Dr. Harry Van Sandt was Montrose’s first doctor from 1870 until his death. He erected a store room and dwelling house. When he started his first store, it featured a fine assortment of drugs to aid the people of Montrose with their health problems. Harry Van Sandt died suddenly in an accident.

Dr. Albert E. Goebel was born on a farm near Montrose. He attended schools in Montrose, Effingham and Charleston. Albert taught school for seven years. He began his medical training at St. Louis City Hospital. Goebel completed his internship in 1917 and returned to Effingham County. He brought with him his bride, Lucille Izard Goebel. They lived in Effingham and Dieterich before being recruited by Montrose community members. They were without medical care due to the accidental death of Dr. Harry Van Sandt. Albert was a doctor who made house calls via a horse and wagon. Soon he bought a Ford Model T which made his rounds easier in the little old “tin lizzie”. He practiced 41 years and delivered more than 2,000 babies in Effingham, Jasper and Cumberland counties. His large two-story frame house was at the intersection of routes 40 and 121 for many years before being torn down.

Lawrence Yates Sherman was born in Ohio in 1858. His family moved by covered wagon to Illinois in that same year. The family moved to Jasper County, where he worked on the family farm and attended local schools. After attending Lee’s Academy in Coles County, he taught school in Island Grove. Lawrence taught in other Illinois schools until 1882. He began studying law nights and Saturdays after which he graduated from McKendree College in Lebanon, Illinois, in 1882. He was admitted to the bar that same year and began practice in Macomb for 23 years. Sherman was elected to the Illinois House of Representatives and Senate for 12 years. He was Speaker of the House for two terms. Lawrence served as lieutenant governor for four years. Eventually, Sherman was elected to the U.S. Senate. As Illinois’ “favorite son,” he ran unsuccessfully as a Republican candidate for President in 1916. He married Ella May Crews in 1891, but she died in 1893. As a result of his second marriage to Mary Estelle Spitler of Montrose in 1908, he is buried in Founce Cemetery near Montrose.

J.C. Spitler lived in a two-story home west of Montrose. Local legend says that the house was a stagecoach stop originally purchased by Wesley Spitler from a man named Thayer. J.C. married his wife in 1877. The couple had three children. He died in 1890 and his widow continued to run the family farm. Clyde Spitler Jr. was the first student from Effingham County to receive a B.S. degree from the College of Agriculture at the University of Illinois in 1907. He came back to Montrose to run the family farm until 1917. Clyde was the administrator of the Cooperative Extension Service and helped organize the Effingham County Farm Bureau. In 1930, he became the state leader of Farm Advisors. Clyde held the post of Director of Cooperative Extension Service from 1937 to 1943. J.C. Spitler III was the last Spitler to live in the home and later moved to Urbana, thus leaving the homestead abandoned. The house fell into disrepair and was razed in the late 1980s.

David Babb Crews started the D.B. Crews Bank in Montrose (aka Montrose State Bank and Crews State Bank and Trust Company of Montrose) in 1902 and Bank of Commerce in Wheeler in 1907. He grew up in Jasper County on a farm near Wheeler. Crews was also a venture capitalist who, as a young man, owned and operated a cattle ranch with 500 cattle in Texas 1881-1884. After he married his wife, Frances Morton from Iowa, in 1880, they moved back to a 240-acre farm near Montrose. They had 10 children, some of whom worked in the family banking business. Crews sold the 240 acres and purchased 600 acres in Grove Township. After purchasing an additional 400 acres, he retired from farming in 1900. The Crews couple later moved to Effingham. where he and wife Frankie built a large, two-story frame home at the corner of Fayette Avenue and Banker Street. They rented out rooms to students enrolled at the Illinois College of Photography. David served on the Effingham Board of Education. The family attended the Methodist Church. Plaford and Zona B. Davis purchased the property and operated the Plazona Hotel for many years. It was torn down in 1949 to make way for the new First Baptist Church. David and Frankie are buried in Oak Ridge Cemetery in Effingham.

In 1868, a Methodist congregation was organized in a log school house. They built a small, one-room white frame structure in 1870, and it served the congregation for 86 years. On June 9, 1956, a new red brick structure was dedicated in the middle of the village. A gift from the Dexter Johnson estate allowed the building of the new church and a parsonage. Today the Montrose United Methodist Church serves the needs of Methodists in the community.

St. Paul’s Lutheran Church was organized around 1868 by the pastor of St. John’s Lutheran Church in Effingham. The congregation consisted of Lutherans from St. Francis Township and Island Grove. On May 29, 1871, a frame structure was erected around four miles south of Montrose. By 1900, the congregation had outgrown the facility necessitating the building of a new brick church. On Nov. 18, 1900, it was dedicated as a German-speaking Lutheran church. This is evidenced by the German inscription above the door and on the cornerstone. A major addition was added in 1968. There is a parsonage next to the church.

St. Rose of Lima Catholic Church was organized in 1879 at the request of three families. A white wooden frame church was built in the Village of Montrose in that same year. It served the congregation for 78 years and depended on priests from St. Joseph College in Teutopolis. The congregation built a new church made of Bedford stone in 1959. It was dedicated on Nov. 6, 1960.

The St. Rose of Lima Catholic Cemetery and Montrose Cemetery of 1913 are located at the north edge of Montrose near the Cumberland County line.

Effingham County, Illinois: Past and Present 1968