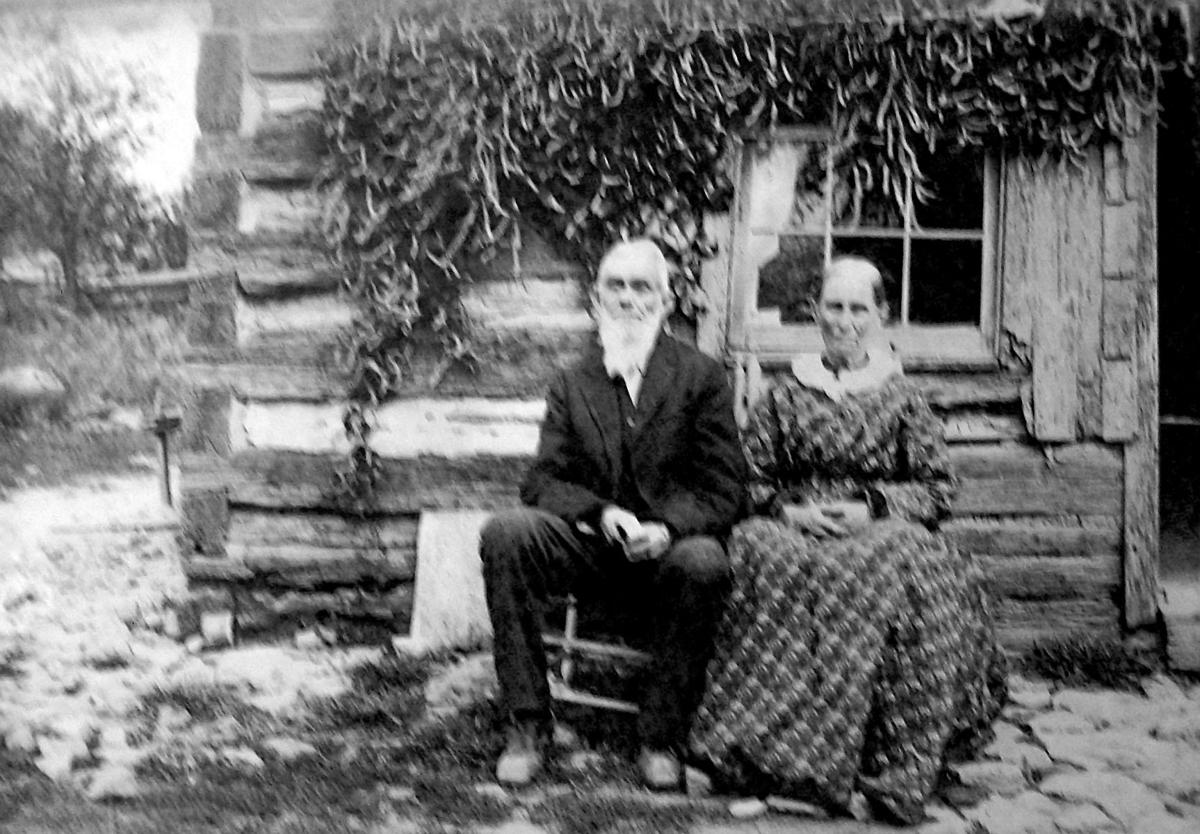 Alfred Fitch photographed this couple in front of a log cabin. 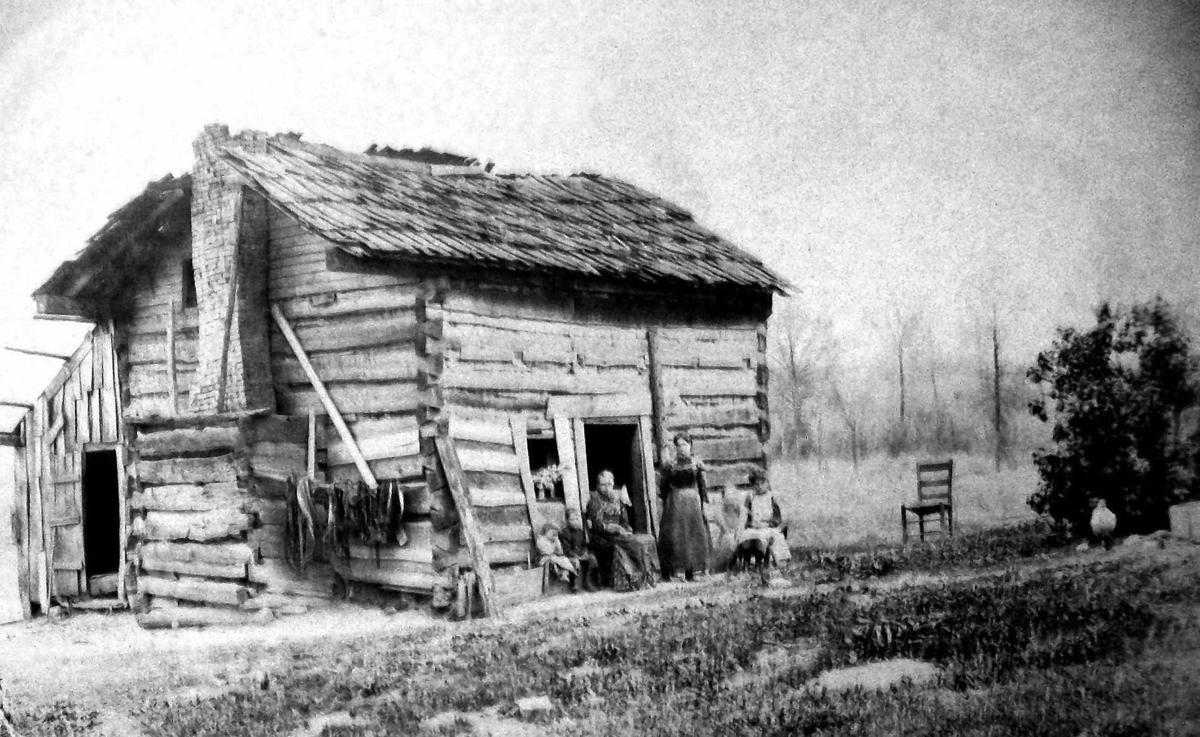 Family in front of a barn. 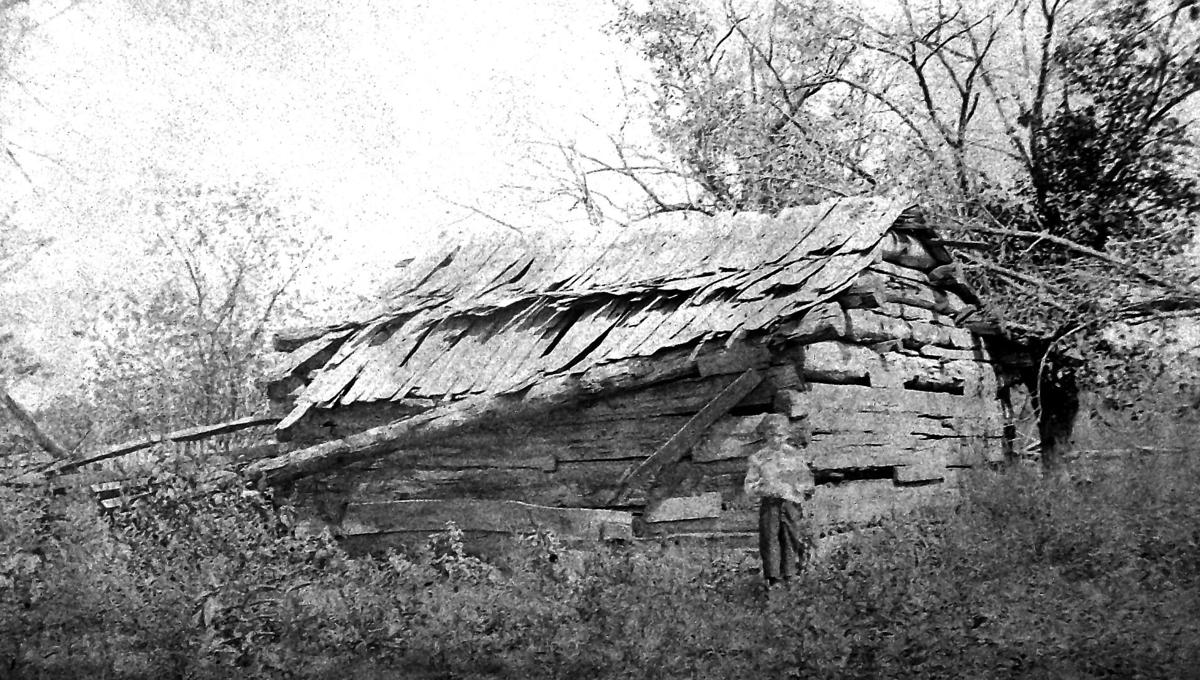 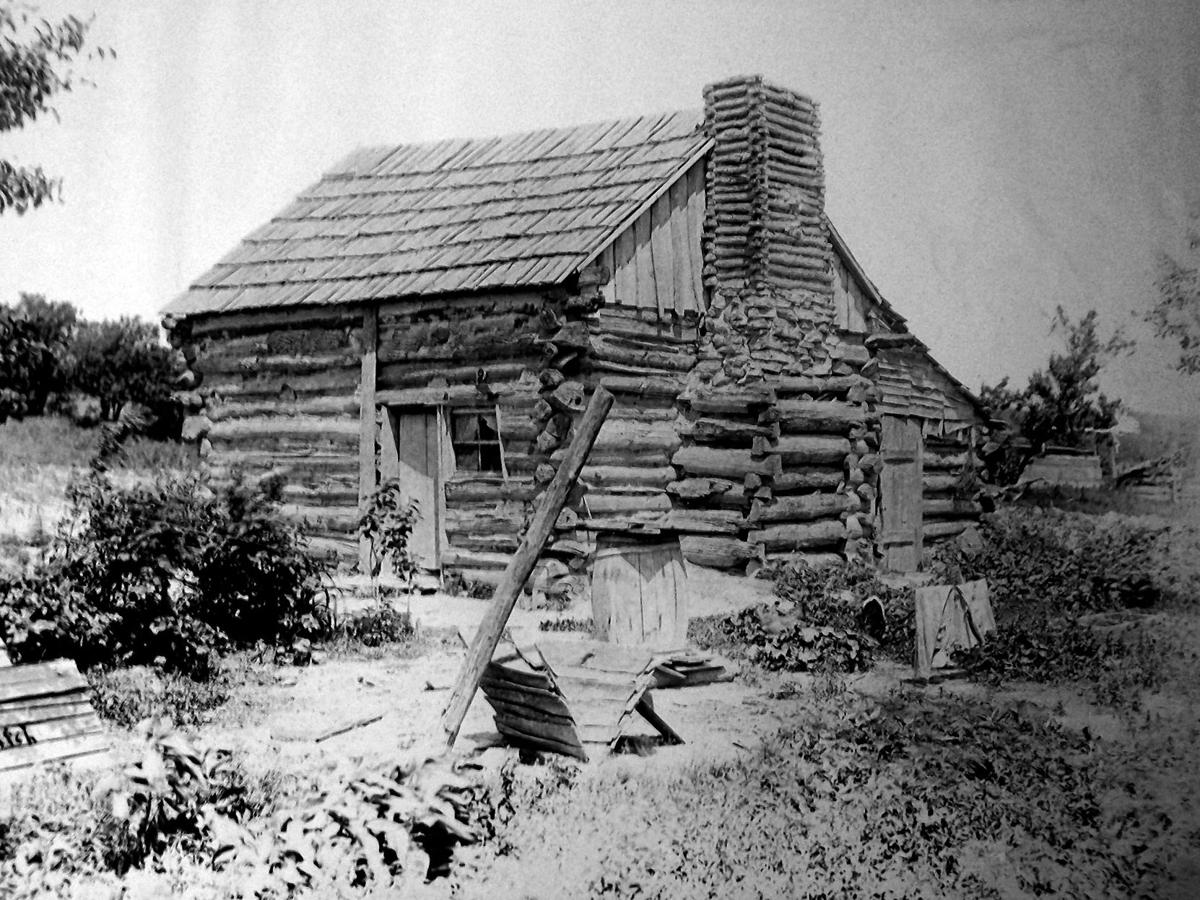 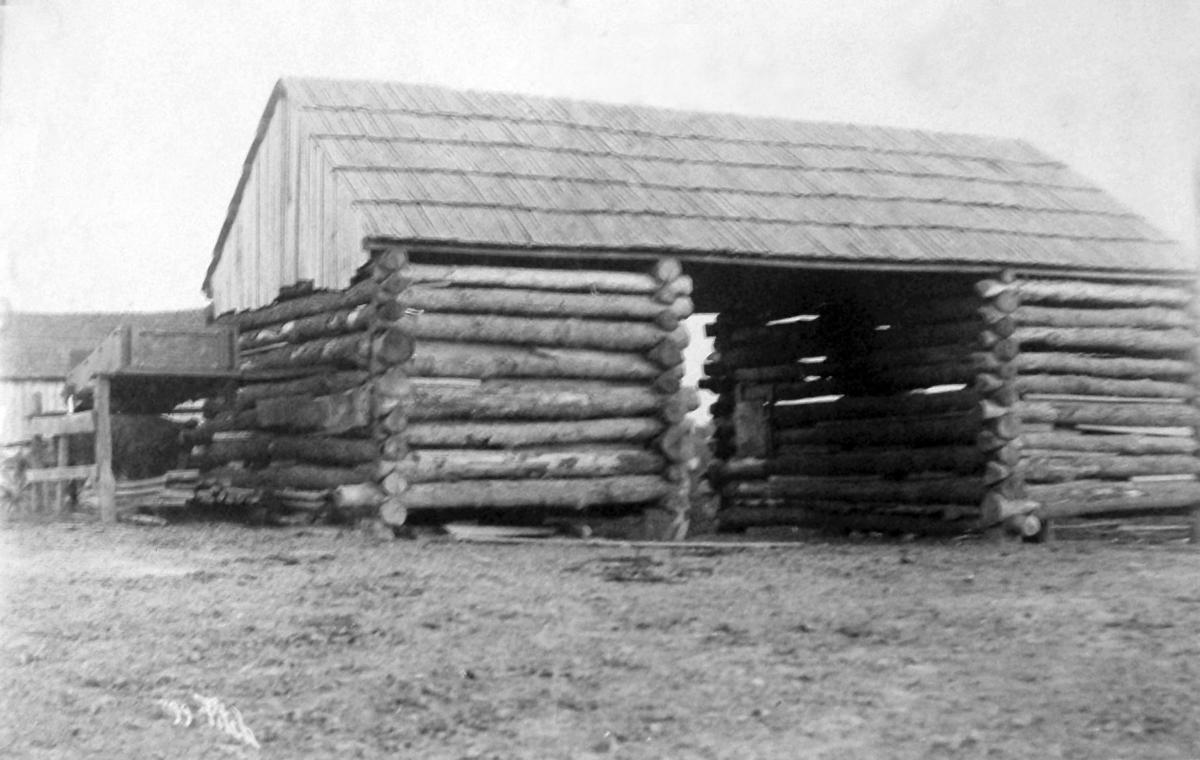 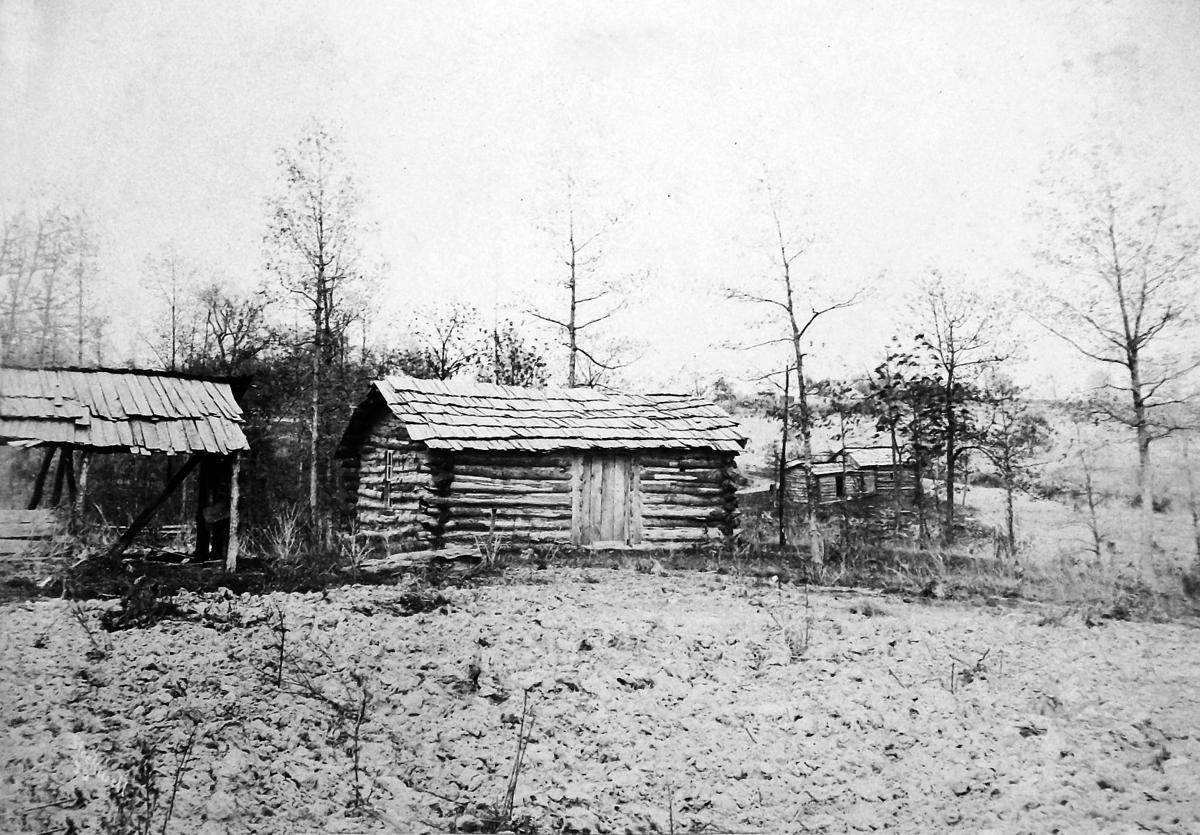 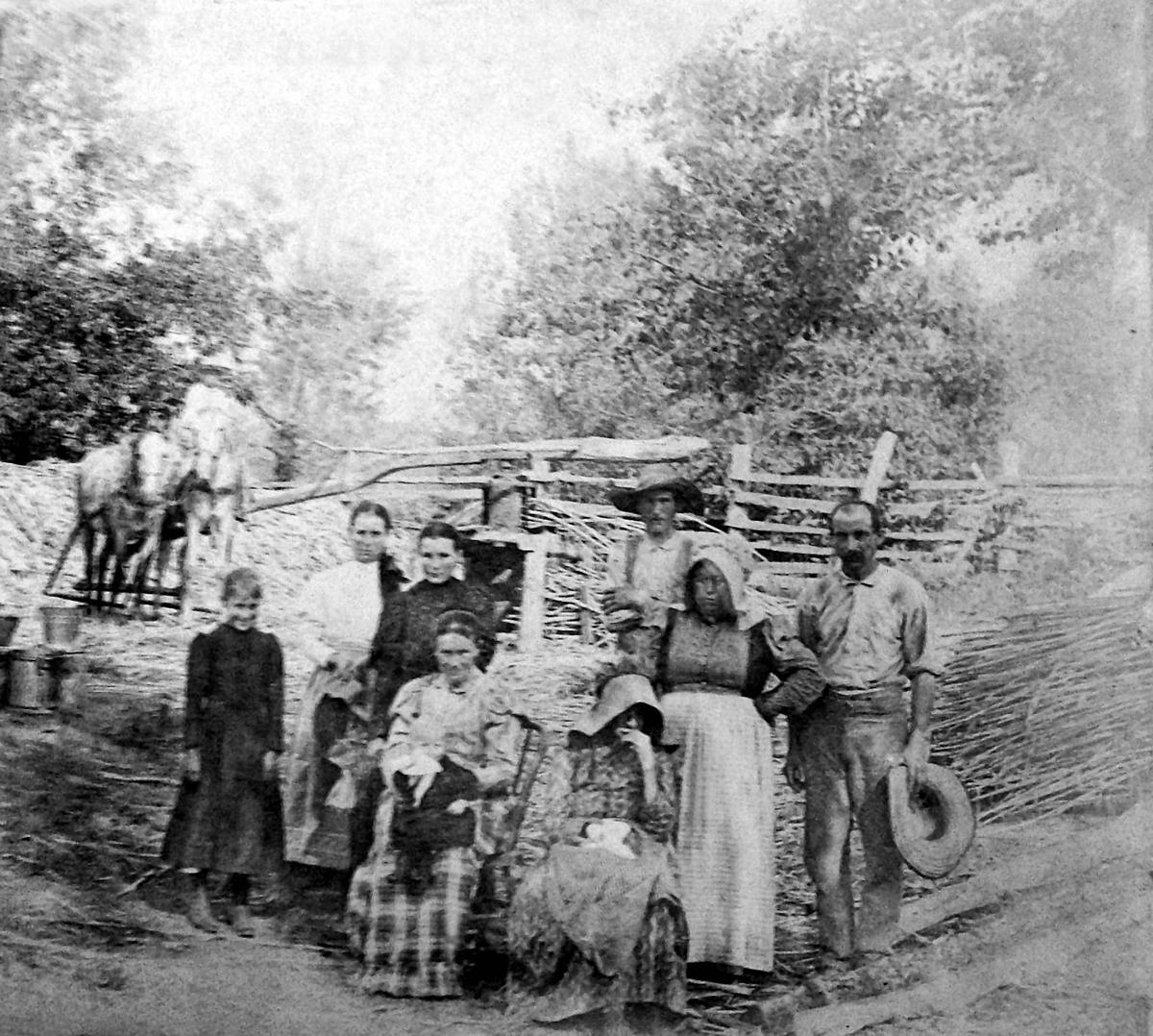 Alfred Fitch photographed this couple in front of a log cabin.

Family in front of a barn.

He often traveled out to farms and took pictures of farmhouses, barns and other outbuildings. In this article, I’m going to show you some of the farms he photographed. Unfortunately, I do not know who these farms belonged to or exactly where they were located. He didn’t leave much information about that.

By the time Alfred was taking pictures, most of the buildings in the small town and villages were made from sawed lumber. However, out in the country he could still find the log cabins and log farm buildings.

He took many pictures of these old log cabins and farm buildings. If you should recognize any of them, please let me know. I hope you enjoy these pictures.

My own family came to Illinois in its early years. They settled first in Shelby County in 1828 or 1829 but shortly after the 1830 census the Loy family moved to Effingham County. When the Loy family arrived, it was John Henry Loy, his wife, Mary “Polly” (Hodge) Loy, and their 10 children, Sarah H., Joseph C., Elizabeth M., Thomas Moore, Margaret Tillman, Rachel H., John Henry Jr., James Edward, George Washington and DeWitt Clinton. I am descended from the ninth child, George Washington Loy. By the time all 10 of these children married and their children married, there were a lot of Loys and Loy descendants in Effingham County.

My grandpa, Ted Loy, said there used to be a saying that “You couldn’t throw a rock without hitting a Loy.” The area where many of them settled in Watson Township became known as “Loy Prairie”. Loy School was No. 35 in Section 16 of Watson Township and they established Loy Chapel and Loy Cemetery to the north of the school.

Their first order of business after moving here from Alabama was getting shelters built. Many early settlers built a three-sided lean-to for shelter until they could get a log cabin built. After a log cabin was built, the lean-to could be either added on to or used for their animals. It was important to get a log cabin built before cold weather. My great-great-grandfather was only 5 when they built their first log cabin but I’m sure he was put to work as a helper for his older brothers and father.

Many of the log cabins were built of oak, which was known for being very durable. However, first the trees had to be felled, branches removed, and cut into the lengths they needed. The logs were then notched and they started building the cabin.

They cut trees and planed the wood to make the door and window frames and the shakes or wooden shingles for the roof. Until they could get glass, greased paper was put in the window. They chinked in between the logs with a mixture of clay, sand and lime.

At first, the floor was usually hard-packed dirt but as they got more time, they added wood floors that were plain sawn or wood planks. These could be pinned into place with wooden pins. We have some floor pins at the museum from an early log cabin located near Teutopolis. The door was made of sturdy wood and hung on leather hinges until they could get metal hinges.

For furnishings, a bedstead was built into a corner and the ticking (straw-filled mattress) usually lay on top of a rope support. Later, the straw ticking would often be replaced by a feather bed.

The youngest child slept in a cradle and sometimes there was a trundle bed that slid under the bedstead during the day. A loft was constructed for the older children complete with a ladder for them to use.

A table, benches, perhaps some chairs, a churn, and a spinning wheel completed the furnishings for their log cabin. The furnishings were plain but sufficed until they could get better furnishings.

As a child, I remember my parents taking me back to a log cabin not too far from my grandparents’ farm. Dad showed me the rope bedstead that was built into the corner. I’ve always wished we’d had a camera with us that day but we were mushroom hunting so all we had were empty bread sacks.

The chimneys in the early log cabins were often built of wood and sticks and packed with mud. There was a fireplace inside for cooking. Fires were a real hazard for these early settlers in Effingham County. In one of the pictures you can see an early log cabin with a wood chimney. The roof was covered with wood shakes. Again, as the wood dried out, fire became a real problem. When they could, they would rebuild the chimneys using bricks or stones.

Outside of the cabin was where the women made gardens for vegetables. They usually had a barrel that was used to catch rainwater. A well had to be dug or water had to be transported from the closest source. If they were lucky, there was a spring near the cabin. They also built log structures to house their animals and farm equipment and tools. These buildings were sometimes covered over with sawed lumber once they had sawmills nearby.

Once the log cabin was built, the men had the daunting task of clearing the trees to plant crops. That was very hard work and took a long time to do.

I find this information about early agriculture in the book “Effingham County – Illinois – Past and Present (1968)”:

“Early agriculture in Effingham County was confined to small fields cleared along the edge of the timber and in the creek-bottom lands. Corn, wheat, oats, hay, vegetables and some fruit were raised in quantities to meet the needs of home consumption.”

It goes on to say this: “Until 1850, there were not more than 50,000 acres of land in farms. After that date, the cultivated land increased rapidly, along with the growth of population until near the end of the century.”

One was the increased use of the steel plow that made it easier for farmers to cultivate the land. Before the steel plow, many early settlers were still relying on the wooden plow which broke frequently or became clogged up with the soil they were trying to plow through. As they could afford it, they replaced their wooden plows with steel plows.

Another reason was the military land bounties given to veterans. My great-great-grandfather, George Washington Loy, fought in the Mexican War (1846-1848). In 1847, Congress granted bounty-land warrants for service in the Mexican War under the act of 1847.

On February 10, 1851, George Washington Loy was granted 160 acres. This was a military warrant under the authority of the February 11, 1847, Scrip-Warrant Act of 1847. Sadly, George W. Loy only had six years to farm this land before dying at the young age of 32 in 1857. Thomas M. Loy also received land from the Scrip-Warrant Act.

The book “Effingham County – Illinois – Past and Present” gives more information about the use of acreage in later years.

In one of the photos by Alfred Fitch, you can see a family picture that shows sorghum canes being ground. Sorghum was used as a sugar substitute for many people in Effingham County because it was something they could grow themselves. They could also sell the finished sorghum as a cash crop.

They had come to this area in the late 1820s and early 1830s. They traveled the National Trail and other roads when the prairie grass was as high as the top of their covered wagon. They cut down trees, hewed the logs, and built log cabins. They watched Effingham County grow from its early formation in 1831. They witnessed Ewington become the first county seat. They started a family, loved their children, and even buried a few. They worked to build a school for their children and a church for worship. They saw men march off headed to the Mexican War in 1846. They raised their crops, tended their livestock, and carved out a life for their family as they worked hard to clear more land. They saw the new town of Effingham become the county seat. They saw the first trains that whistled and chugged through Effingham County. They watched their young boys and other men march off to fight in the Civil War. Some came home. Some did not. As time passed, their children grew up, married, and started families of their own. Life was full of hard work, some heartaches, but also much joy. Now in their later years, they feared for those who might have to fight in the Spanish-American War for they had seen enough of wars. The old man often said to his wife of many years, “Life was not always easy but life was good.” They were pioneers of Effingham County.

Please contact me if you have any early pictures of Effingham County that you would like for us to copy for the museum. I still continue to add more Effingham County school pictures to our school binders. I am also still collecting pictures and information in order to remember and honor those from our county who served in the military. Over 1,000 military write-ups done so far and looking to do many more. Email me at janeries55@gmail.com or call or text me at 217-821-2427.