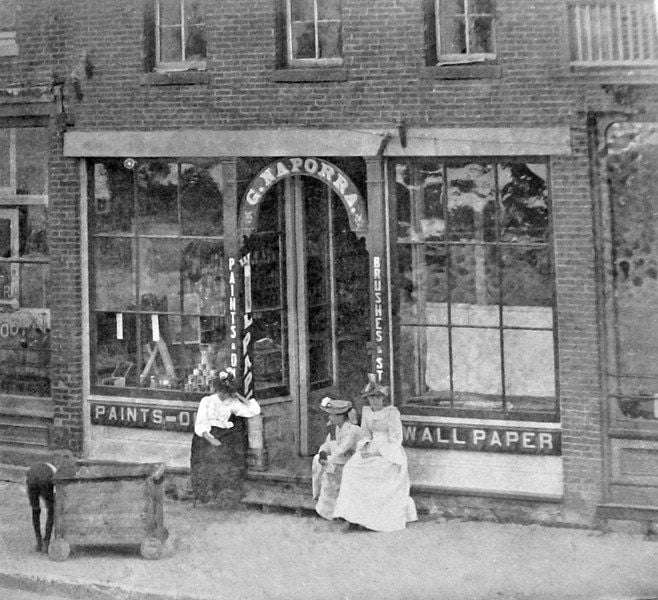 The picture shows Gus Naporra Paint and Wallpaper store when it was located on Jefferson Street.Alfred Fitch photo 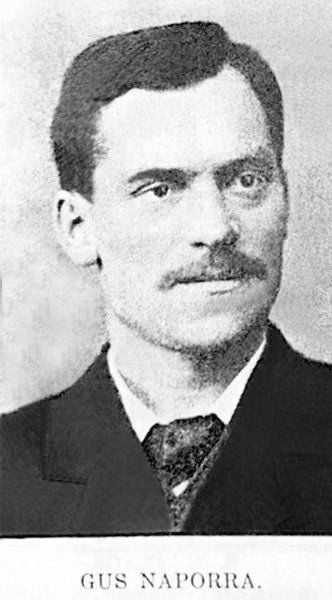 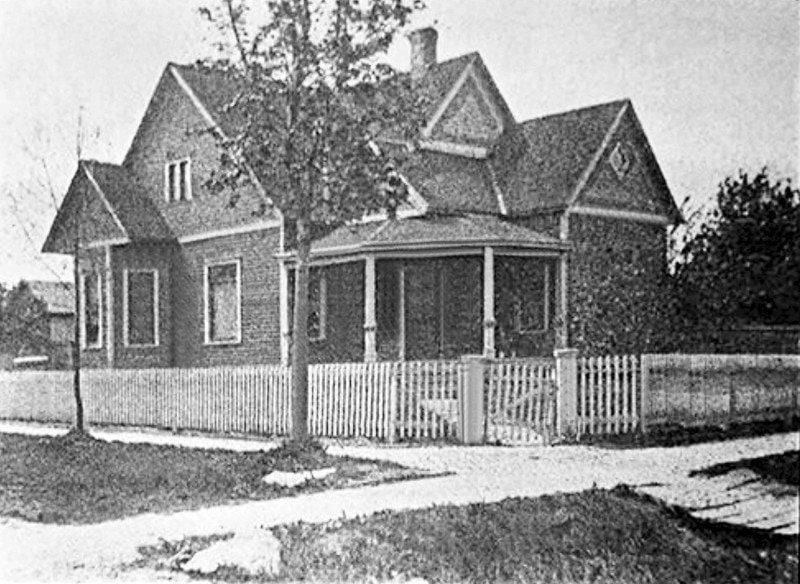 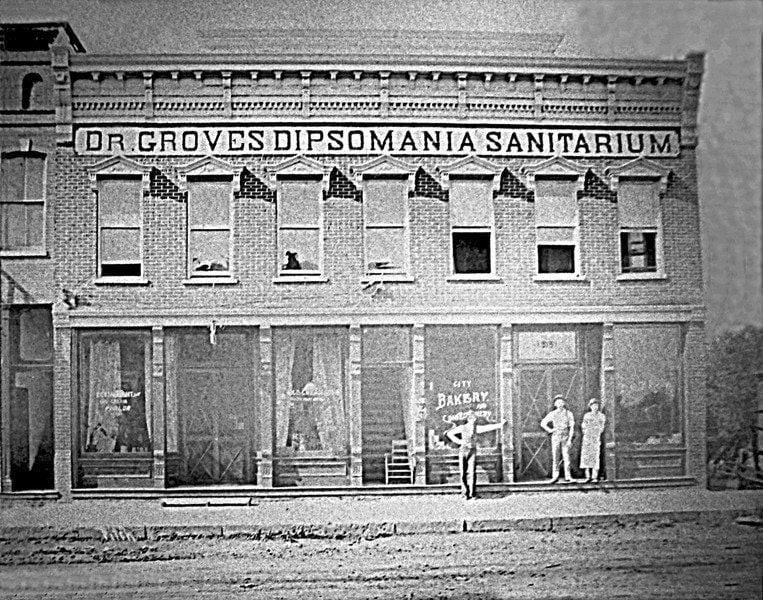 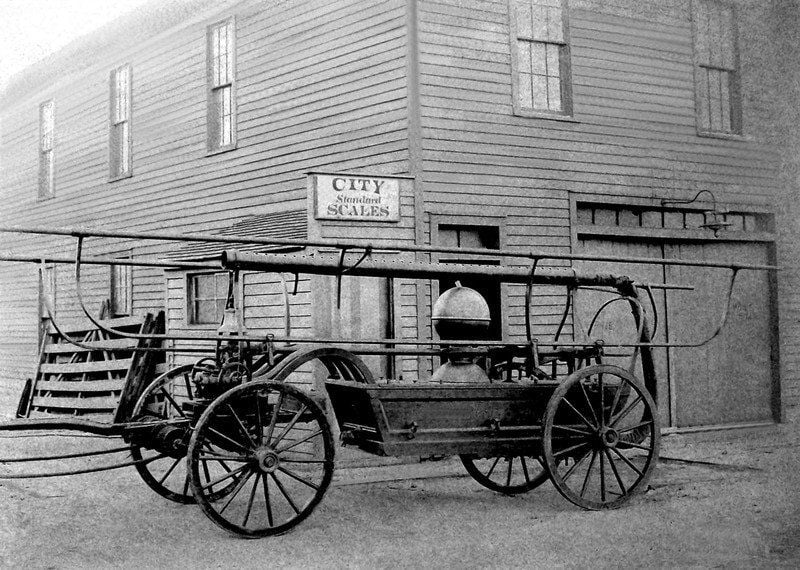 This picture by Alfred Fitch shows City Hall and fire engine circa 1898. 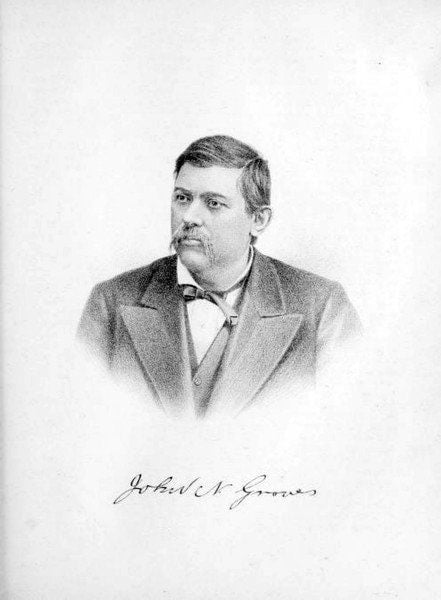 The picture shows Gus Naporra Paint and Wallpaper store when it was located on Jefferson Street.Alfred Fitch photo

This picture by Alfred Fitch shows City Hall and fire engine circa 1898.

In this article, I'm taking a look at Jefferson Street in Effingham circa 1898. This would be the block just east of the railroad tracks. The people featured are Gustave Naporra and Dr. John N. Groves. Both owned businesses on Jefferson Street. You will also see pictures of the wallpaper and paint store of Gustave Naporra, his home in 1903, City Hall, and Dr. Groves Dipsomania Sanitarium. I hope you enjoy learning more about this block of Jefferson Street.

Gustave Naporra was born August 28, 1857 in Germany. He came to the United States in 1876 and eventually settled in Effingham. Gus married Ada B. "Addie" Lind on May 19, 1886 in Effingham. Their wedding was recorded in the German newspaper the Effingham Volksblatt.

"The wedding of Mr. G. Naporra and Miss Addie Lind took place at the home of the father of the bride, Mr. D. Lind, on Wednesday evening. Rev. Walker from the local M. E. church performed the ceremony. After the wedding, the young couple received the well-wishes of those present — only the closest relatives and friends were invited — and then took their places at a table laden with all the delicacies of the season. After this was taken care of, the guests indulged in pleasant conversation for a couple of hours and then the young couple was escorted to their own home east of the courthouse. The beautiful new home was toured by the group, and then the guests said good-bye to the young couple amid heart-felt best wishes; the Volksblatt hereby also extends its best wishes." (Source: Effingham News as Reported in the Effingham Volksblatt 1884-1886 D. A. Brumleve 2004).

Gus owned a paint and wallpaper store. It was first located on 4th Street across from the courthouse. In 1885, Naporra and Lind (his soon to be in-laws) were hired to paint the woodwork on the outside of the Courthouse. Also in 1885, Gus painted the sign for the banking firm of Eversman, Engbring, & Wood. In 1886, Gus moved to a location on Jefferson Street. At first, it was known as LeCrone & Naporra, but later Gus became the sole proprietor. This store was located in the building that later became Thies Paint and Wallpaper. This building is still there and is now Stevenson Dental.

Gus was very active in Masonic Lodge 149. He was also an alderman when Effingham used that form of government. He served on the City Council from the Fourth Ward. Gus was also a member of the Commercial Club in Effingham, as well as the German Club. He believed in being active in his community.

On Wednesday morning, the members of the hose brigade went to Centralia; the hose brigade consists of the following gentlemen: Foreman Gustav Naporra and Members F. W. Loy, W. B. Wright, Jos. Merz, Henry Merz, Wm. Seits, Joe Thies, Fred. Pauli, Henry Vogt, John Osthoff, and John Linn, as well as Chief Schneider, Assistant Chief Loy, and, in addition, R. Speck, Arnold Kreke, R. C. Harrah, and Wm. Surrells. The hose-wagon had already been sent there the day before. They were cordially received in Centralia and led to the hotel. Four brigades, namely those from Greenville, Litchfield, Effingham and Centralia, had entered the race, which took place on the fairgrounds in the afternoon. The Litchfield brigade didn't take part in the race, since they had a patented stopper on the hose. Effingham had to do the first run, and covered the prescribed stretch of 700 feet and attached the hose in 42.5 second. Centralia did the route in 40.75 seconds, and Greenville in 45 seconds. (Source: Effingham News as Reported in the Effingham Volksblatt 1884-1886 D. A. Brumleve 2004).

For many years, the fire station was just catty-corner across the street from Gus Naporra's shop. Effingham's City Hall and Fire Department were located where the parking lot is just west of Baseball Card Connection. City Hall and the Fire Department would remain in this location until a new building was built on Banker Street.

Gustave "Gus" Naporra died on February 20, 1925 and is buried at Oakridge Cemetery in Effingham. Addie lived for a time with one of her married sisters in Indianapolis. She moved back to Effingham and was living on Section Street at the time of her death. Ada "Addie" (Lind) Naporra died on May 16, 1945 and is buried by her husband Gus in Oakridge Cemetery. Gus and Addie only had one child who died as an infant.

Just across the street from Gus Naporra's store on Jefferson Street was the building that we now know as Baseball Card Connection. For many years, it was Stevens Hardware. In 1898, the first floor of the building contained the "City Bakery". The second floor featured "Dr. Groves Dipsomania Sanitarium". This was a treatment for alcoholism developed by Dr. John N. Groves. Here is information about Dr. John N. Groves.

JOHN N. GROVES, M. D., President and physician and surgeon of the Groves Dipsomania Sanitarium, of Tuscola, Ill., and the discoverer of Groves' Dipsomania Cure, a most successful treatment for alcoholism, was born in Perry County, Ohio, February 21, 1841, and is a son of Lewis and Elizabeth (Hook) Groves. His parents were both natives of Ohio, and are now deceased. In 1854, he accompanied them from the Buckeye State to Illinois, and the family settled in Crawford County. At the age of fifteen he became a student of the Ohio Wesleyan University, at Delaware, where he pursued a three-years course of study. Returning to Illinois, he began the study of medicine at Hardinsville in 1858, under Dr. S. M. Meeker, of that place. In the fall of 1860, he entered the Chicago Medical College, in which he spent a winter and summer term. In July, 1861, he began practicing in Watson, Effingham County, where he continued to follow his profession until the 1st of August, 1862.

On that date, Dr. Groves enlisted for the Civil War as a private of Company F, 98th Illinois Mounted Infantry, under Capt. Albert LeCrone. He was at once made hospital steward, and in March 1863, was promoted to the rank of First Assistant Surgeon of his regiment, in which capacity he served until the close of the war. He was detailed as surgeon to accompany the Fourth Michigan Cavalry in quest of Jefferson Davis, and was present at the capture of the Confederacy's president. After the close of the war, he was mustered out of service in July 1865.

Immediately returning to Illinois, Dr. Groves located in Effingham, where he formed a partnership with Dr. John LeCrone in the practice of his profession. Soon afterward, he entered Rush Medical College, of Chicago, from which he graduated January 24, 1866. He then at once resumed practice in Effingham and continued in partnership with Dr. LeCrone until 1868, when the connection was discontinued, and he removed to Freemanton, now Dexter, Ill., where he was in active practice until the year 1870. In that year, he moved to Altamont, where he engaged in practice until 1879, when he returned to Effingham, and soon built up here a large and lucrative practice. On the 1st of January, 1893, he retired from general practice to accept the position of superintending physician and surgeon of the sanitarium in Tuscola, Ill., that bears his name. This institution, although comparatively young, is rapidly growing in importance and prominence, and bids fair to become at no distant day the leading institution of its character in the country.

Dr. Groves has been thrice married. In Watson, Ill., in January, 1862, he wed Miss Regina V. Cline, who died May 5, 1863, leaving one child, a daughter, Regina V., now the wife of Jacob Zimmermann, a well-known attorney of Altamont. In March, 1865, the doctor wed Miss Anna K. Kellim, who died September 24, 1891, leaving two sons and a daughter, namely: John N., George and Gussie. On the 16th of June, 1892, Dr. Groves was united in marriage in Effingham with Miss Annie Sliger, his present wife.

Dr. Groves is Surgeon-in-Chief of the Springfield, Effingham and Southeastern Railroad. He is also local surgeon of the Ohio and Mississippi Railroad, and has served as physician and surgeon of Mercy Hospital in Effingham. In his social relations, he is a member of Altamont Lodge No. 533, A. F. & A. M. Dr. Groves has now been in the constant and successful practice of his profession for 32 years, and has won a flattering reputation. His army service gave him valuable experience in surgery in early life, which has been added to by an extensive practice. His natural ability and thorough study, supported by long experience, have placed him in the foremost rank of successful men of his profession in southern Illinois. (Source: Portrait and Biographical Record of Effingham, Jasper and Richland Counties Illinois, Containing Biographical Sketches of Prominent and Representative Citizens, Governors of the State, and the Presidents of the United States. {Chicago: Chapman Brothers, 1887})

I'd like to take this time to invite you to our Christmas Open House at the museum. We are once again offering two dates to better serve you. The first date will be on Friday, Nov. 30, from 6 to 8 p.m. The second date is Sunday, Dec. 2, from 2 to 4 p.m. Please attend and see all of the beautiful Christmas decorations. As usual, if you have pictures you need to get to me, my email is janeries55@gmail.com or you may call or text me at 217-821-2427.