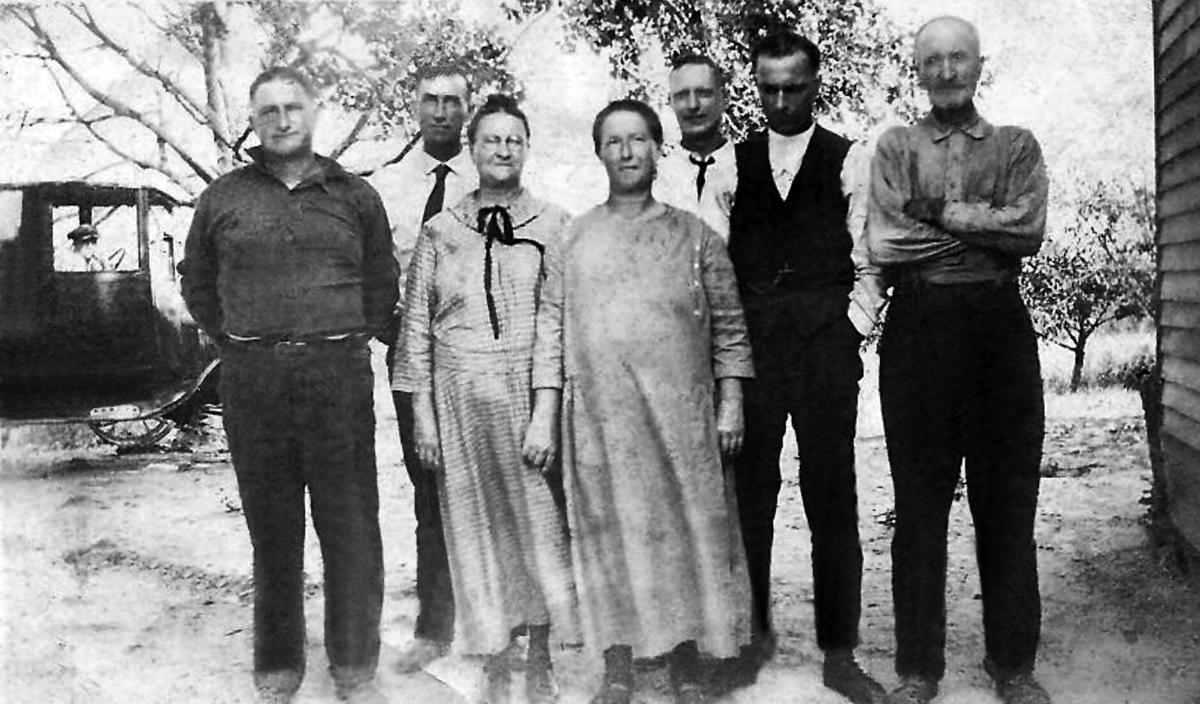 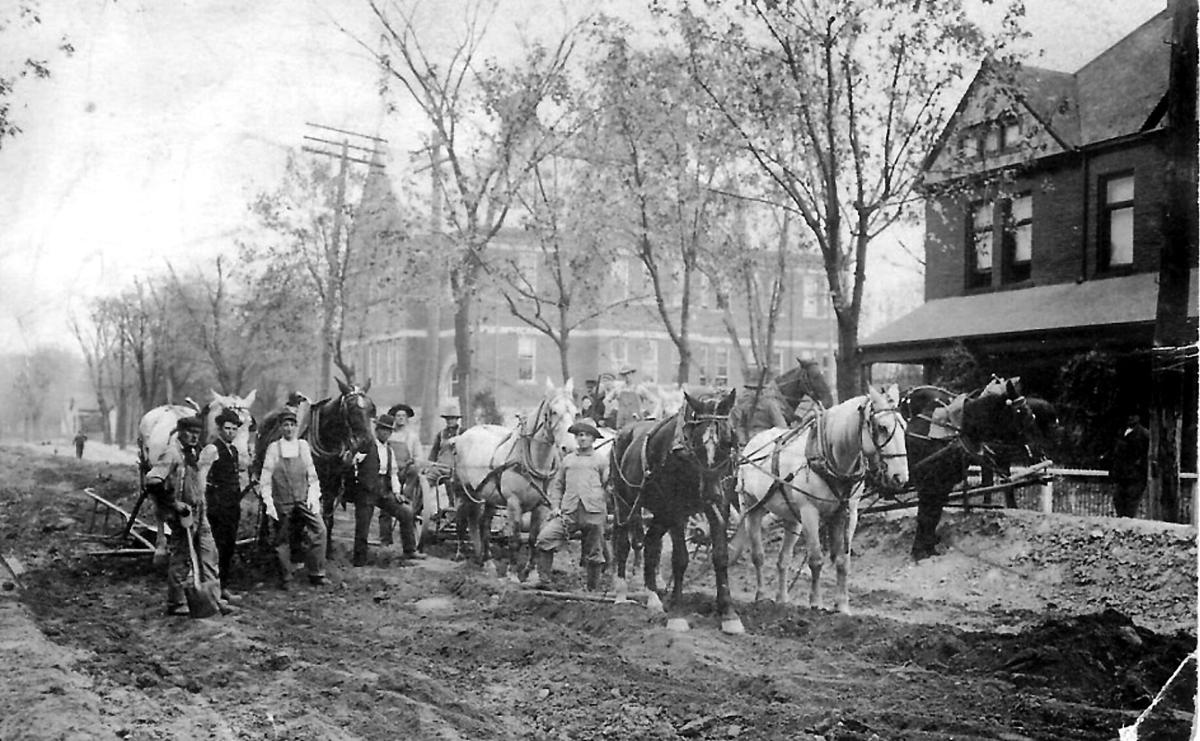 Working on Fayette Street and David B. Crews home on right. 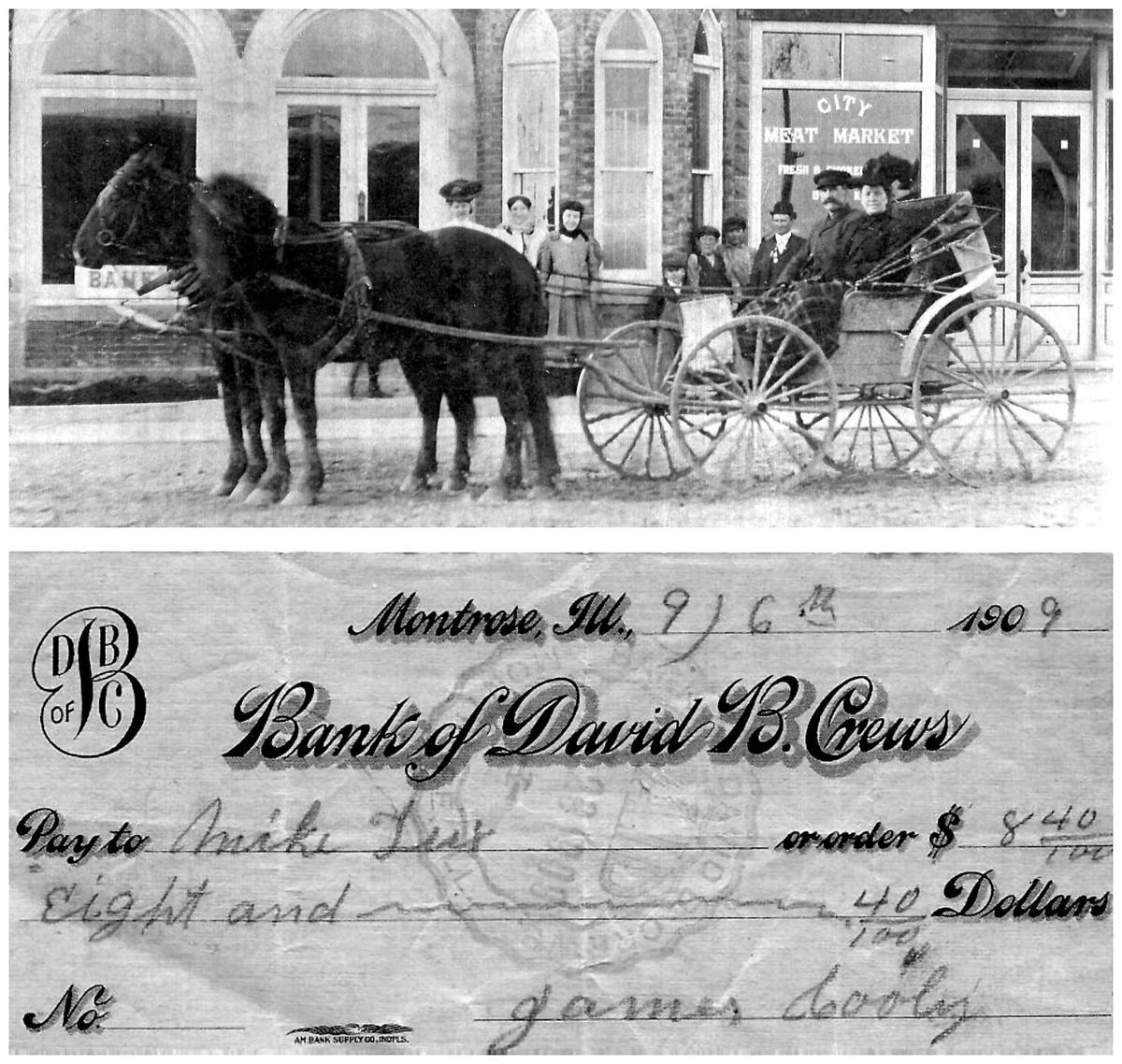 Montrose Bank of David B. Crews and Check from James Cooley. 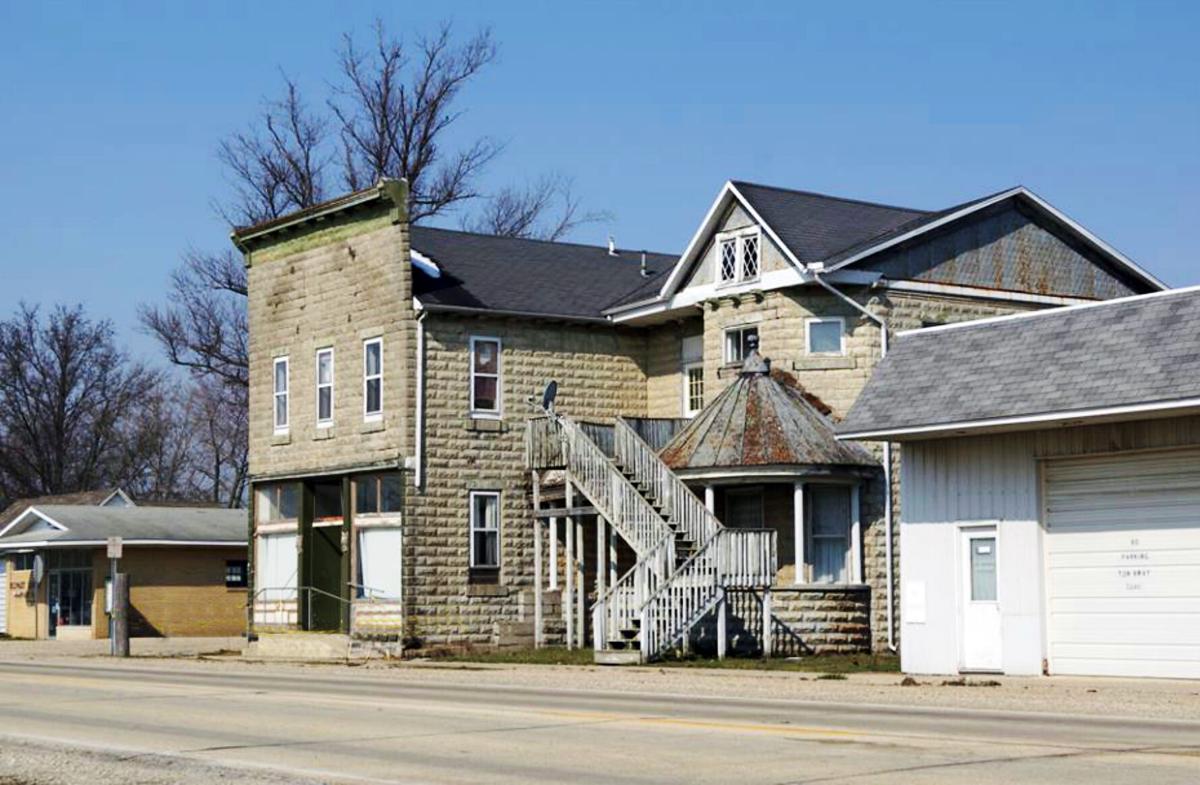 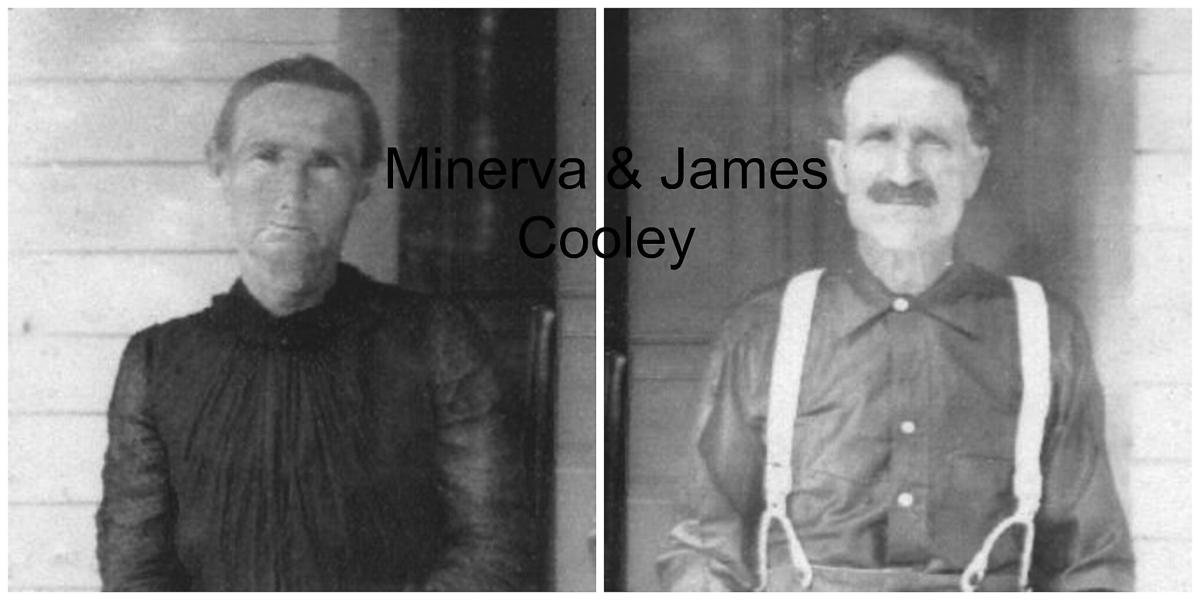 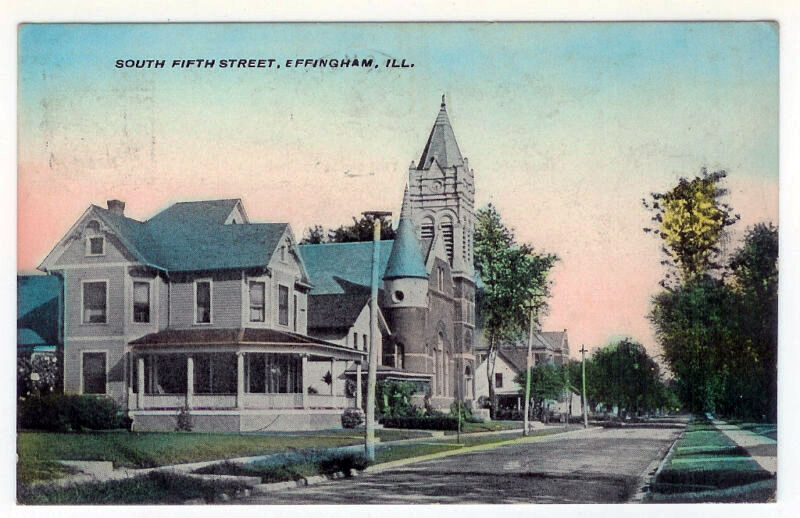 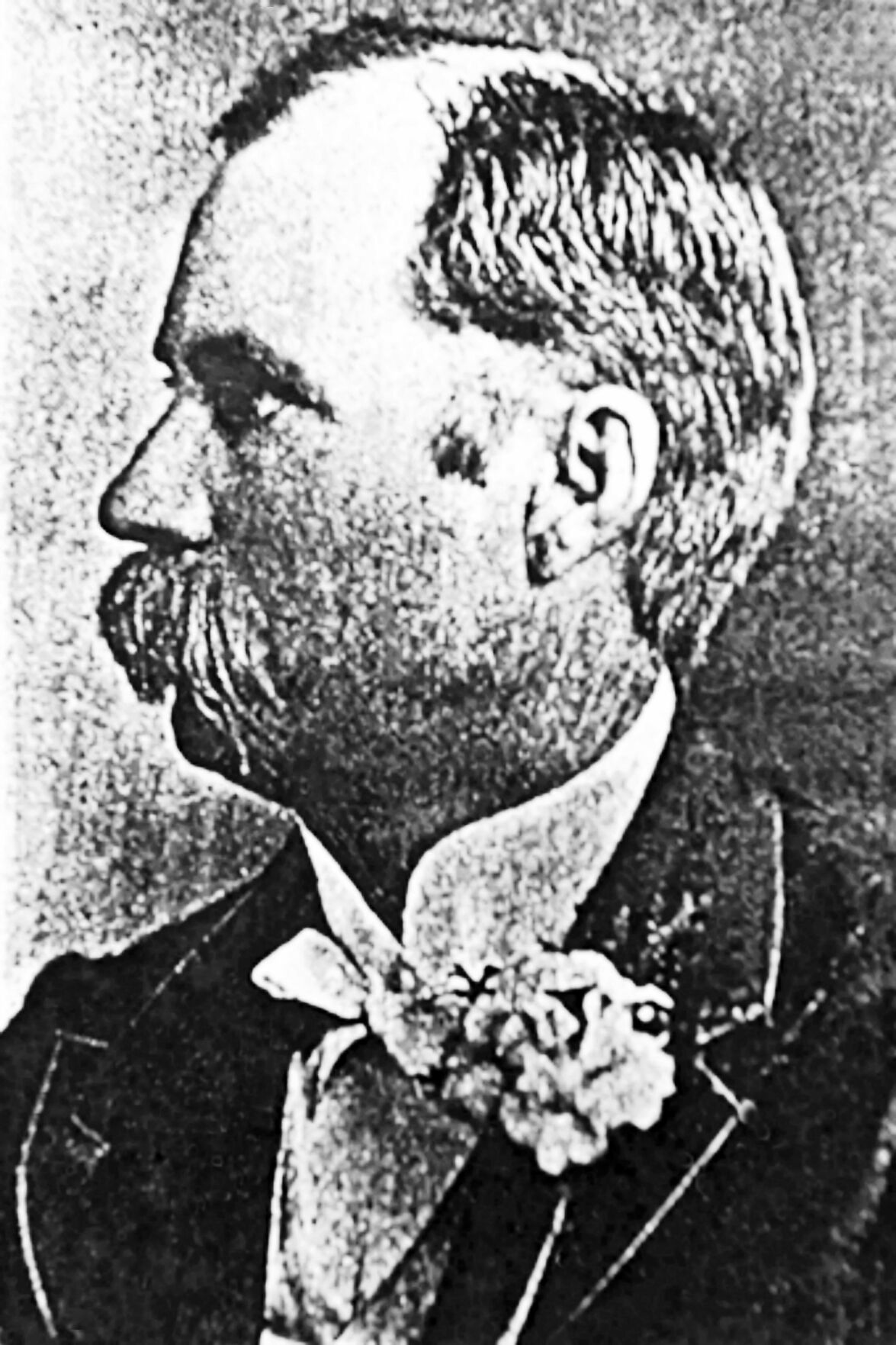 Working on Fayette Street and David B. Crews home on right.

Montrose Bank of David B. Crews and Check from James Cooley.

In this column, I’m writing about two different families with roots in Jasper County, Illinois. The Cooley family were small farmers and the Crews family were farmers with a lot of acreage. Both had large families and strong work ethics. Both families had at least one family member move to Effingham County.

James married Minerva Skinner on July 4, 1870, in Jasper County. She was the daughter of Aron and Elizabeth Skinner. James and Minerva had the following children: Cora, Ora, Carrie, Willis, Minnie, Charles “Barnum”, John and Leonard. James was a small farmer and his children grew up helping on the farm. The Cooley farm was only about a quarter of a mile from Island Creek Cemetery. The children all walked to Shiloh School. The Cooley family were members of the Methodist Episcopal Church.

James, Minerva and their children often visited Montrose for supplies both for the farm and home. When the Meislahn store opened in 1898, they often traded there. Starting in 1902, James did his banking at the Bank of David B. Crews in Montrose. The Cooley family knew the Crews family since both families were from Grove Township in Jasper County, Illinois.

Two of the Cooley boys, John and Leonard, decided to leave the farm and work on the railroad. My grandfather, John W. Cooley, had taught at Shiloh School for a year and decided that was not for him. John and Leonard trained as telegraphers with Lou Bishop at the Vandalia Railroad tower just west of Montrose. Other area men trained by Lou Bishop were August Goebel, Jess Dial, C.O. Brewster, Rollie Dittamore, James Clark, Alan Templeton, Arlen Varvil, Carl Bell and Walter Bishop. The Vandalia Railroad would later become the Pennsylvania Railroad.

John and Marie (Claar) were married in 1910. They raised their children in Effingham County. John worked as a telegrapher and also tuned pianos. He was the only one of James and Minerva’s children to not stay in Jasper County. John and Marie’s children were: Jewell, Mildred, John, Ruth, Daphne, Quentin, Rhea, Charles and Charlotte, who died in infancy.

John W. Cooley remained as a telegrapher until he retired. He was usually at the tower in Altamont or in Effingham. In 1939, he had enough seniority to have the Effingham tower so they built a home on Owen Street in Effingham. This street later became known as Maple Street. His brother, Leonard, worked as a telegrapher until he had enough money saved to buy his own farm in North Muddy Township in Jasper County. Leonard and Sara lived there and farmed until Leonard passed away in 1942. I remember going with Mom to visit Aunt Sara in Newton.

Cora, Ora, Minnie and Barnum are all buried at Island Creek as are their parents, James and Minerva Cooley. Willis and Leonard are buried at Wheeler Cemetery in Jasper County. My grandparents, John and Marie (Claar) Cooley are buried at Oakridge Cemetery in Effingham.

David B. Crews married Frances “Frankie” Morton on October 27, 1886, in Montrose. David was very active in community affairs in Jasper County and he continued that when he moved his family to the town of Effingham in 1900. David established a bank in Montrose in 1902 and still maintained a lot of farm acreage in Jasper County. His bank was first called the Bank of David B. Crews. It was later known as the Crews State Bank and Trust Company. David, Frankie and their children worked in the bank at different times. The old bank building is still standing in Montrose. David B. Crews also organized a bank in Wheeler, and helped organize the State Bank of Commerce in Effingham. In Effingham, he served on the school board and during World War I he was the Effingham County Food Administrator.

The Crews’ home was on Fayette Street just west of Central School. David and Frankie had a large family and their house was large enough for all of them. Their children were Verna, Beulah, Veva, James M., Bethel, Zella, Arch, Lillian, Frances and Rhea. The Crews family also had students from the Illinois College of Photography stay with them. Their house was a quick walk for the students to any of the three buildings that were part of the college.

David, Frankie and the rest of the family suffered a tragedy when their daughter, Veva, and her husband, Raleigh Brown, died within days of each other from the Spanish Influenza pandemic in December of 1918. Veva and Raleigh owned and operated the Raleigh Hotel that was located on the northwest corner of Banker and Fayette. Veva’s sister, Beulah, and her husband, Dr. Clarence C. Holman, raised Veva and Raleigh’s daughter, Carroll, after their deaths.

The Crews home was later owned by Plaford and Zona B. Davis and called the “Plazona” and they rented rooms to tourists. It was a beautiful old home and it’s sad to know that it is no longer standing.

My mother, Rhea (Cooley) Loy, said she was named Rhea after Rhea Crews, the youngest daughter of David and Frankie Crews. Both the Cooley family and the Crews family attended Centenary Methodist Episcopal Church on 5th Street in Effingham.

In our younger years, Mom used to take us to Island Creek Cemetery and Wheeler Cemetery to decorate the family graves in Jasper County. That’s when she would talk about her dad’s roots in Jasper County. As she drove, Mom would point out places that were important to the Cooley family. She showed us where the Cooley homeplace had been in Jasper County. When we drove through Montrose, Mom would point out the building that had been the Meislahn store and later became Bishop’s store. She showed us the building that had once been the Bank of David B. Crews. I have checks and a bank book that belonged to James Cooley, her grandfather, from when he banked at the Bank of David B. Crews. When I found an early picture of the Bank of David B. Crews, I knew what it looked like when James Cooley started banking there.

John and Marie Cooley are buried at the south end of Oakridge Cemetery, and David B. and Frankie Crews are buried at the north end of Oakridge Cemetery. The Cooley family and the Crews family both had roots in Jasper County, Illinois. They planted new roots in Effingham County but never forgot their old roots in Jasper County. Both families knew the importance of family ties and deep roots in their communities.

I’ve always loved this quote that is used in the quarterlies of the Effingham County Genealogical and Historical Society and I think it fits this column: “There are only two lasting bequests we can leave our children. One of these is Roots; the other, Wings.” Hodding Carter (1907-1972)

You may bring your information to the museum or email the information to me. My email is janeries55@gmail.com and my phone number is 217-821-2427 if you have any questions.

Remember, I’m still collecting pictures of Effingham County so if you have some that you would let me copy, please contact me.