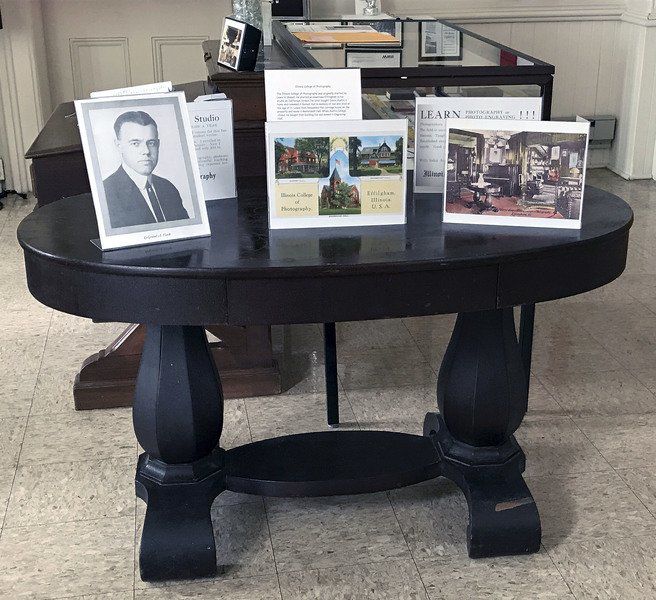 Shown is the Illinois College of Photography parlor table. 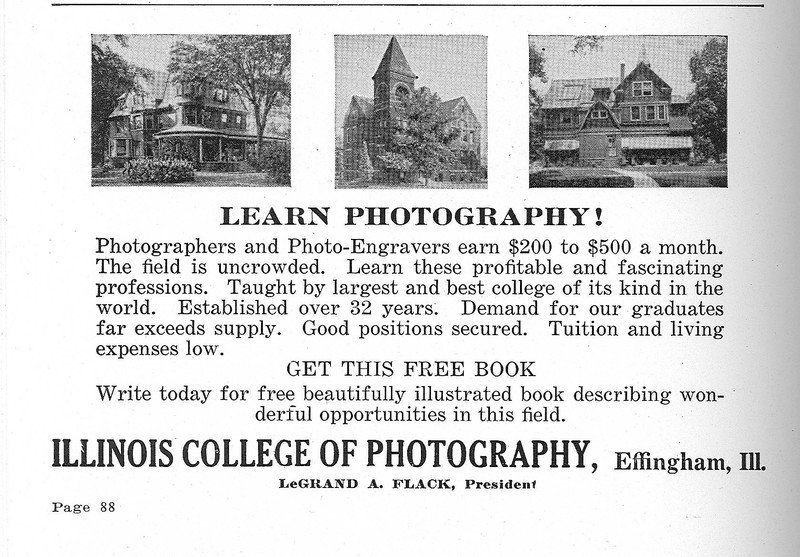 An ad for the Illinois College of Photography in the 1926 Effingham High School yearbook is seen here. 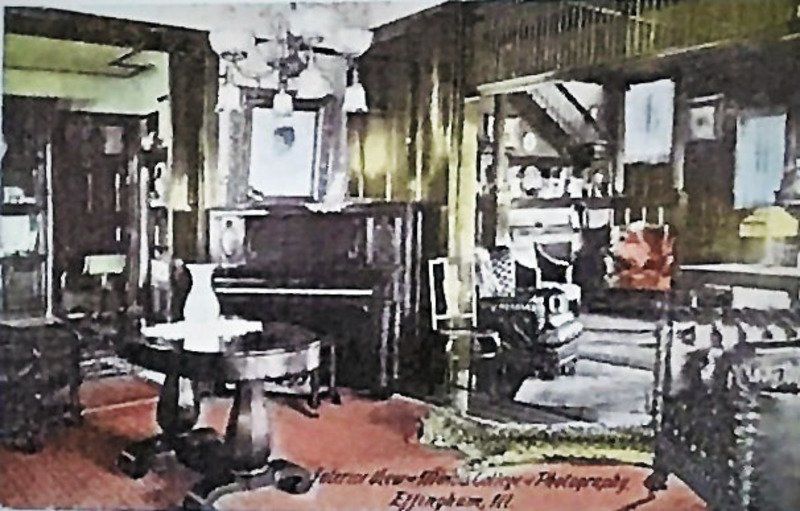 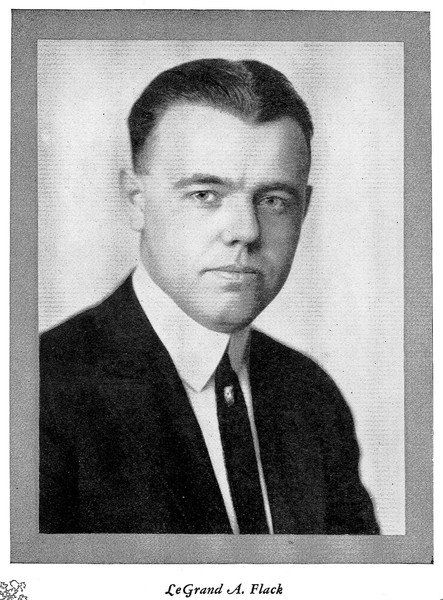 LeGrand Flack is shown in a 1928 Illinois College of Photography book. 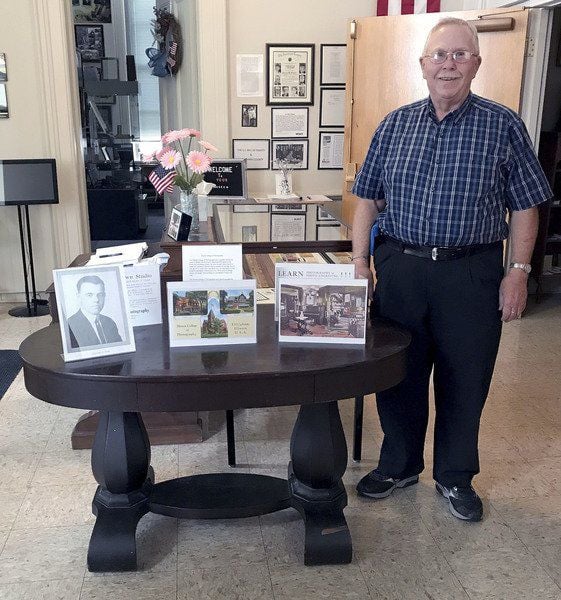 Jim Flack stands next to the Illinois College of Photography parlor table. 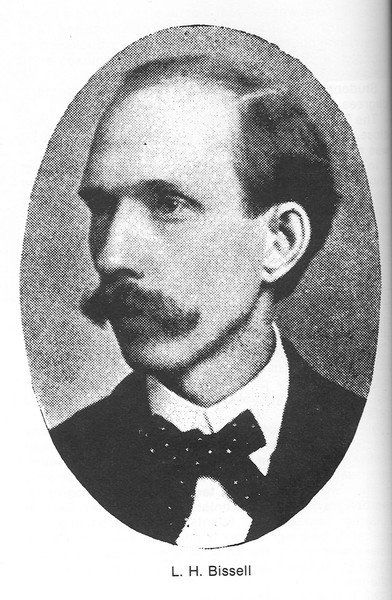 Shown is the Illinois College of Photography parlor table.

An ad for the Illinois College of Photography in the 1926 Effingham High School yearbook is seen here.

LeGrand Flack is shown in a 1928 Illinois College of Photography book.

Jim Flack stands next to the Illinois College of Photography parlor table.

The Effingham County Museum’s intent is to make people aware of the rich heritage of the area. That heritage is found in old photographs, clothing from yesteryear, formal documents, historic cookware, and a thousand other types of artifacts stored in basements and attics. When such items are brought into the museum, an ever-increasing appreciation of the past becomes possible.

Recently, the museum received for display a parlor table from the Illinois College of Photography. Jim Flack, whose great-uncle, LeGrand Flack, was the last president of the school, provided the table for the museum. Standing in front of the table makes one wonder about the great variety of people whose personal lives may have been intertwined with that piece of furniture.

An old postcard, which shows the table in its original setting within a college building, takes the viewer back to the early 1900s and links the furniture with the founder of the school, Lewis H. Bissell. Bissell, a person who by age 16 demonstrated an unusual business acumen as well as photographic skill, sometimes joined forces with other photographers and sometimes worked by himself. When Bissell finally became the sole proprietor through a 19-year period of time, 18 other photographers tried unsuccessfully to offer competition. But, according to one 1893 source, no one could match the work of his gallery, which was recognized as “the largest and best equipped” between “Chicago and New Orleans.” The patrons of photographer Lewis H. Bissell were well-pleased with the quality of the work which he performed.

Bissell’s natural skills were driving him to another endeavor, one which would permit his influence to increase far beyond the little community which he called home: He wanted to provide an unsurpassed educational experience for people who shared his devotion to all phases of the photography trade. So, in 1893, the Effingham camera man began to make his dream a reality. The Illinois College of Photography was born with the intent of providing “a school of practical training under the direction of photographers of national reputation,” as well as to afford students “unequaled facilities” where they were able to receive thorough training to prepare them for their life’s work. Bissell developed an educational enterprise consisting of both a college of photo-engraving and a college of photography.

In February of 1900, Bissell purchased the Calvin Austin Home at the expense of $50,000. Immediately, based on the advice of consulting architects from Chicago, the new owner began to adapt the former residence to the needs of the college. Part of the change also involved new furnishings. The lives of people from around the world soon began to intersect with the parlor table.

Descriptions of the student body indicate pupils from all parts of the Americas, as well as from Asia and Europe. Especially noted was the number of students from Japan. The Camera: A Practical Magazine for Photographers noted in 1905, during the Russo-Japanese War, “The Japanese war does not seem to interfere with the enrollment of the Japanese with photography. The Illinois College of Photography ... has received several Japanese students within the past several months with the promise of more of these industrious people in the Fall.” According to the magazine, The Japanese Student, ICP class rosters during the World War I era contained the Japanese family names of Hashimoto, Hiral, Matsuda, Miyamoto, Nakata, Sato, Shimizu, Tanaka and Yoshida. These students advised their relatives to travel to Effingham to enroll at the photography school

Bissell also encouraged women to become photographers. By 1920, Catherine Filene, editor of the book, "Careers for Women," included the statement: “From the standpoint of the artistic photographer, the best school for portrait work is Clarence H. White’s in New York. There are two others in New York which give more of a commercial training, and one in Effingham Illinois. ... Illinois College of Photography, 910 Wabash Avenue, Effingham, Illinois.”

The litmus test for schools, of course, is can the graduates succeed in careers with the skills taught at the school. A look at the notable (possibly not well-known to the public, but well-publicized in photographic literature) graduates of the Illinois College of Photography provides the answer. A visit to the internet frequently will provide detailed biographies of these photographers if the reader wants to know more about these individuals who were well-known nationally and in other parts of the globe, as well: Robert Bagby, Arthur Serviss Dudley (graduated 1903), Avery Edwin Field (graduated 1906), Fred Hultstrand (graduated 1911), Amando Céspedes Marin (graduated 1900), Edward Weston (attended 1908–1911), Ellery Vladimir Wilcox, Tomar J. Hileman, Ross Hall, Will H. Manahan, C. W. Dishinger, Clarence I. Browne, Lyle B. Tyler, E. W.J. Kurth, Benjamin L. Grey, Frank J. Last and Howard A. Murray.

On Nov. 8, 1921, Lewis Bissell stepped down from his leadership of the college and sold the institution to father and son purchasers, E.E. and LeGrand Flack. The younger man had been secretary for Bissell. The new owners pledged to use “every endeavor to keep (the College) fully abreast of the times and to maintain their present high reputation.” LeGrand, as President of Illinois College of Photography, worked diligently and quite capably to complete the pledge.

A 1926 newspaper headline read: “New Life Given Illinois College of Photography,” then went on to describe changes in curriculum and in advertising, the latter of which was intended to secure more international students than ever before. However, national and international economic conditions did not cooperate.

The death knell occurred during the Great Depression on April 8, 1931. Following a July voluntary bankruptcy, the grand achievement came to an end. Nonetheless, the college’s influence continued in the former students whose photography galleries were scattered around the world.