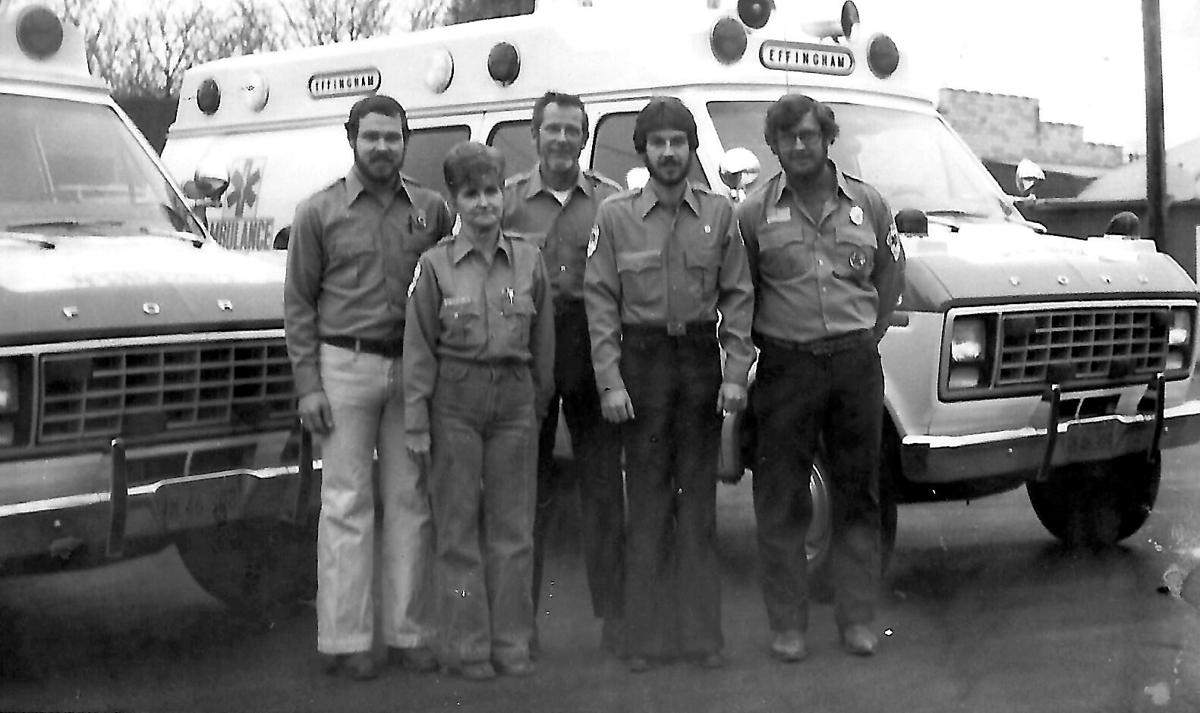 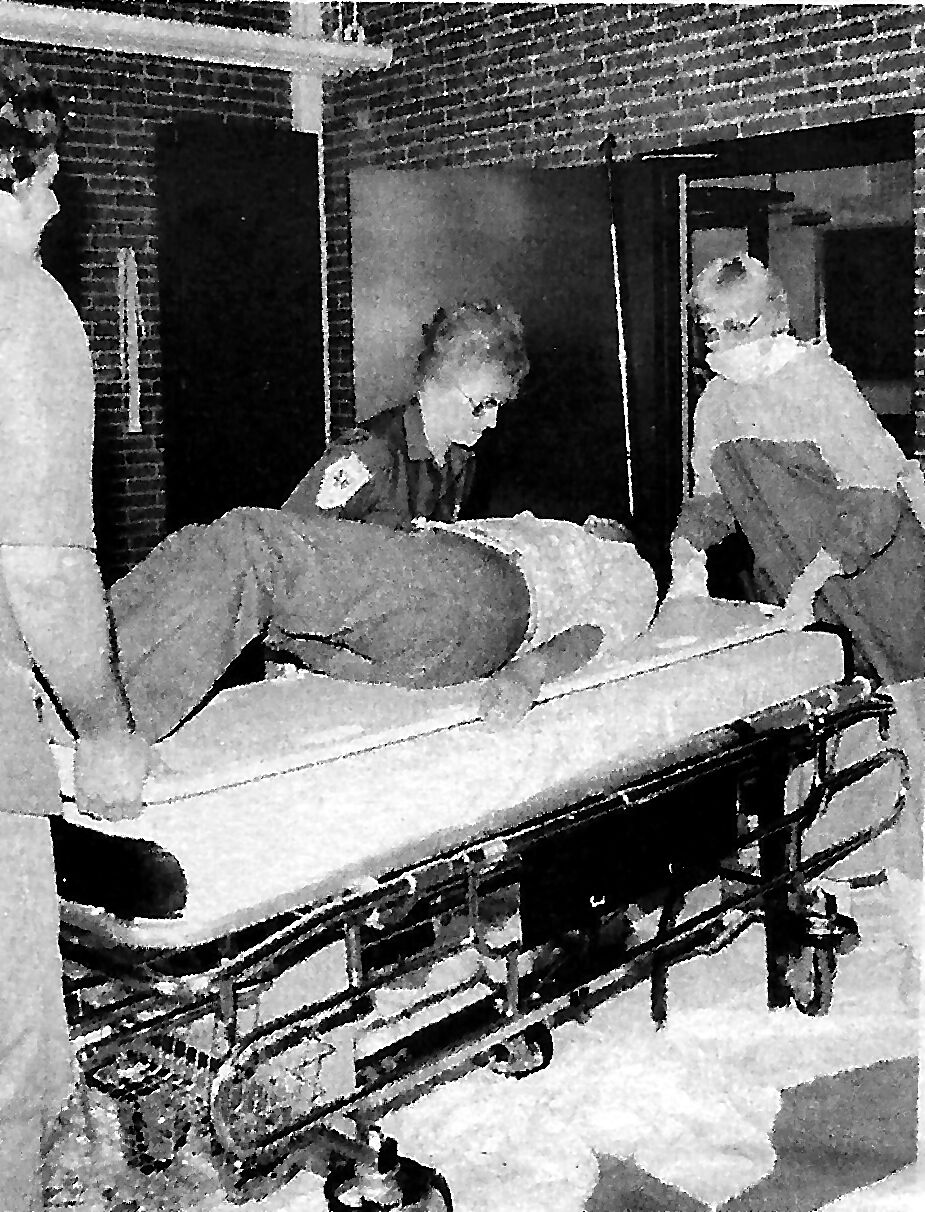 EMT Vivian Robertson participates in a disaster drill at St. Anthony’s in 1981. 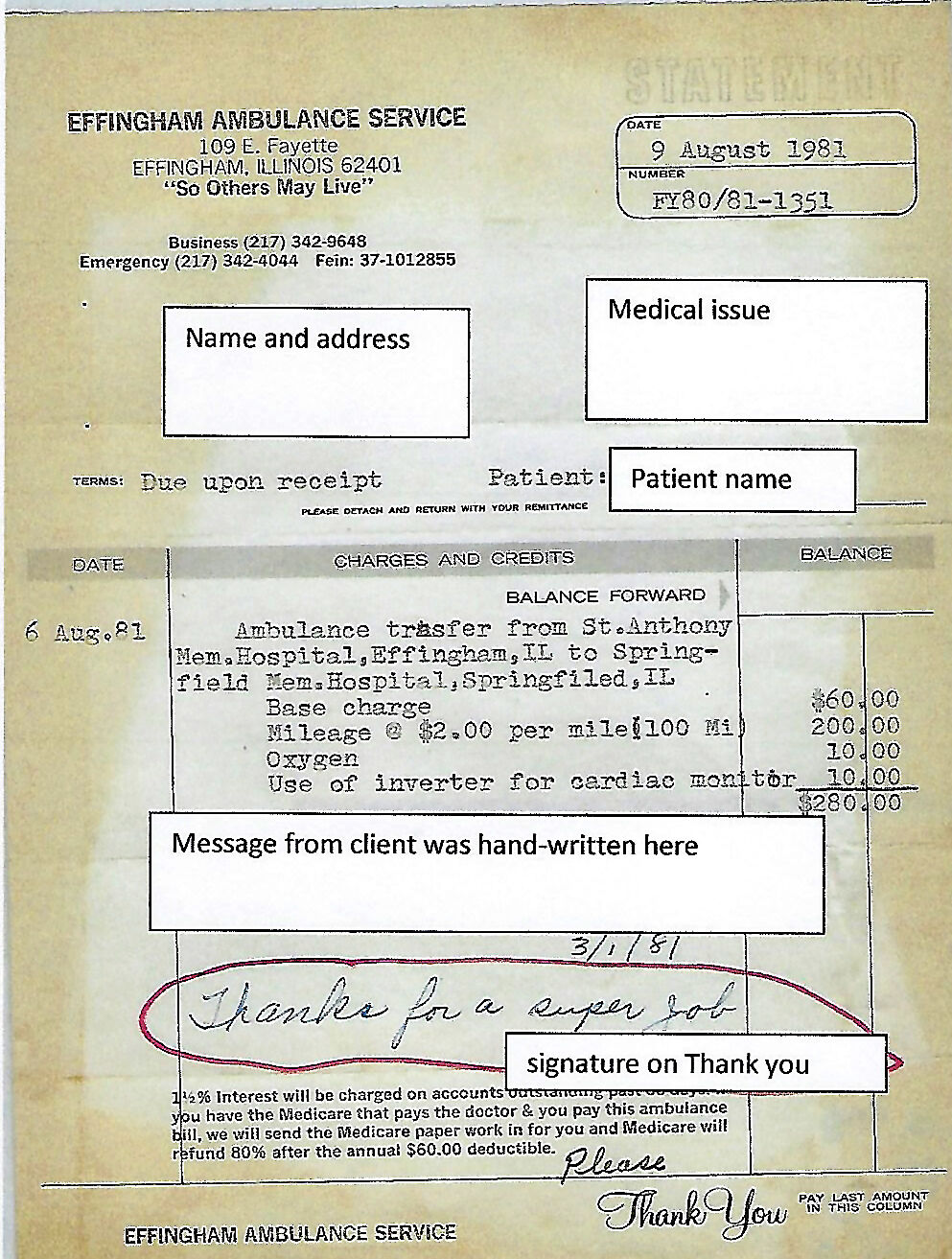 A 1981 redacted Effingham Ambulance Service bill with Thank You is shown.

EMT Vivian Robertson participates in a disaster drill at St. Anthony’s in 1981.

A 1981 redacted Effingham Ambulance Service bill with Thank You is shown.

Up until 1976, ambulance runs in Effingham County were part of the spectrum of services offered by many funeral homes. With the coming of the interstate system, the demand for ambulances went up. That was due partly to a combination of powerful cars, higher speeds, and drivers unfamiliar with I-57 and I-70. In addition, emergency transfers were needed for non-trauma patients. A skilled response to heart attacks, heart failure and acute asthma attacks was saving lives in the local ICU, but the patient had to get there first. That required quick action by trained personnel who could bridge the gap between the hospital and road, home or workplace. The cot at the rear of a Cadillac hearse was no longer sufficient to meet the emergency needs of the people in Effingham County and the surrounding areas.

The Effingham County Museum recently received a donation of materials associated with the first privately operated city-county ambulance service, including 337 news clippings, assorted bills, certificates, thank you notes, complaints and photographs. These materials confirm that the ambulance service got its start on August 28, 1976. Bauer Funeral Home and Johnson’s Funeral Home accepted calls until 6 p.m., and then there was an official switch to the Effingham Ambulance Service (EAS). EAS was a combined city-county provider.

Milton Elefson, formerly the Trauma Coordinator at St. Anthony’s Memorial Hospital, operated the business for almost eight years. He was chosen by the Effingham County Board and the Effingham City Council. At the start, there were three nationally and state-certified emergency medical technicians (EMTs). The EMT position was a new category of health care worker who qualified after specialized classes and applied training.

The fee for an ambulance run in 1976 was $40 per call, plus $1 per loaded mile outside the city limits. The ambulance garage was on Section Street, in the rear of the building that now houses Joe Sippers. In 1977, Elefson attempted to start a subscription service. A family subscription cost $35 per year for Effingham residents and $40 per year for the outlying areas. Over a year, that would have covered five local trips or two transfer trips within a 125-mile radius, but the subscription plan didn’t take off.

Both the city and the county subsidized the Effingham Ambulance Service. In 1979, the subsidy was $20,000; with the county paying approximately a third, and the city the other two-thirds of the total. Elefson requested additional funds on several occasions because the ambulance service wasn’t breaking even. There were a number of reasons why.

Some people couldn’t pay, while others could have, but wouldn’t. Essentials got more expensive, especially gasoline. More consumable supplies and durable equipment were incrementally added to the required list, and in an unpredictable way that made creating a balanced budget difficult. Without the proper equipment and supplies, an ambulance would not be certified by the Illinois Department of Public Health (IDPH). Each ambulance was certified individually, with the vehicle identification number (VIN) as the identifier.

Some of the situations that Effingham Ambulance Service EMTs encountered were dangerous to them. During the summer of 1978, two village of Teutopolis employees were cleaning in the sewers around 8 a.m. A 16-year-old summer worker passed out from hydrogen sulfide gas at the base of a manhole on Water Street. The supervisor went down the ladder to rescue the boy, but then he passed out, too, leaving two unconscious people at the bottom of an 18-foot hole. The Teutopolis fire chief tried to descend with a mask and tanked air to help, but he and his air pack couldn’t fit through the 20-inch opening.

At that point, a uniquely qualified EMT entered the scene with an improvised solution. Leaving his own tank on the surface but connected by a line, he went down and brought lifesaving air to those at the bottom, and then helped haul them to the surface. They were admitted to St. Anthony’s Memorial Hospital ICU, where they finally regained consciousness after 3 p.m. A combination of three factors made this rescue possible. The EMT was a Navy veteran. He had good breath control because of his running history; he was a member of Bob Orr’s very first cross-country squad at Lake Land College. Finally, he had above-average upper body strength because he enjoyed baseball and played as a pitcher. The EMT was Dan Overbeck.

Effingham Ambulance Service personnel did various forms of community service, including teaching CPR and hosting Boy Scout and Girl Scout Troops. EMTs visited senior citizens, spoke to groups, and threw candy in the Halloween Parade. St. Anthony’s Memorial Hospital was required to do disaster drills to retain accreditation, and EMTs delivered mock disaster victims and helped to move them during drills. The newly accessioned collection at the county museum contains thank you notes from these groups.

By 1983, gloves were increasingly in demand with the advent of the human immunodeficiency virus (HIV). The first generally accepted health care provider death due to blood exposure was an emergency room nurse. On August 23, 1986, EMTs delivered a 37-year-old male in acute respiratory distress to a 40-bed hospital in Wisconsin. It was soon apparent that the man was going to die. The ER doctor ordered an ER nurse to pull the patient’s arterial line, and some of the patient’s blood entered a small cut on her hand from gardening. In less than a month, Barbara Fassbinder began to run a high fever, and her HIV test was positive. Barbara spent the last eight years of her life educating doctors, nurses and EMTs about the importance of wearing gloves to keep contaminated body fluids out of their own systems.

Hiring and keeping qualified and competent staff was another issue, especially on weekends. A 1978 client letter in the collection complains of an EMT who smoked in the cab of the vehicle during transport. This concern was a pervasive problem in the 1970s. EMT practice is anxiety-laden, because lives hang in balance during ambulance runs. Nicotine helps buffer that stress for some people.

But the right of the patient to a smoke-free environment eventually prevailed. One of the few sections of the Illinois Administrative Code for Ambulance Licensing written in italics states: “Patients, individuals who accompany a patient, and EMS personnel may not smoke while inside an ambulance.”