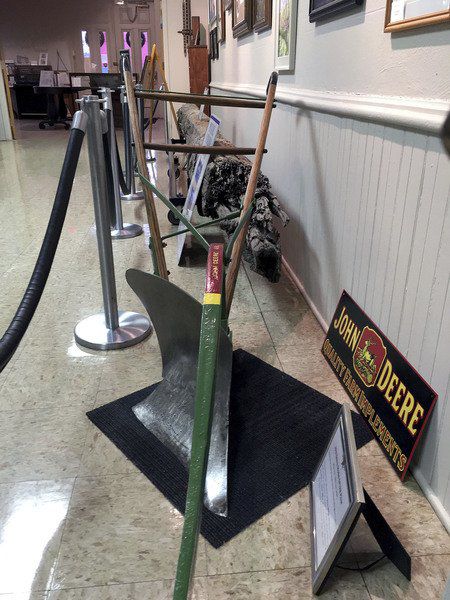 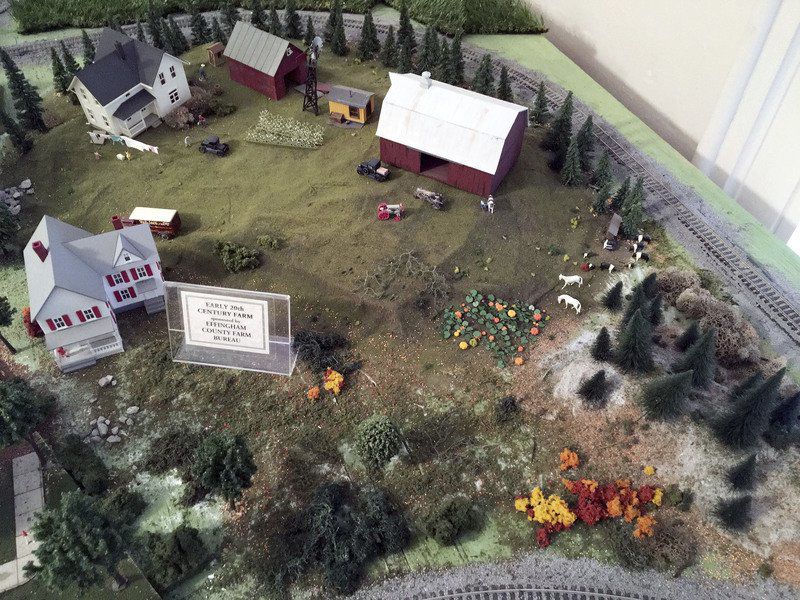 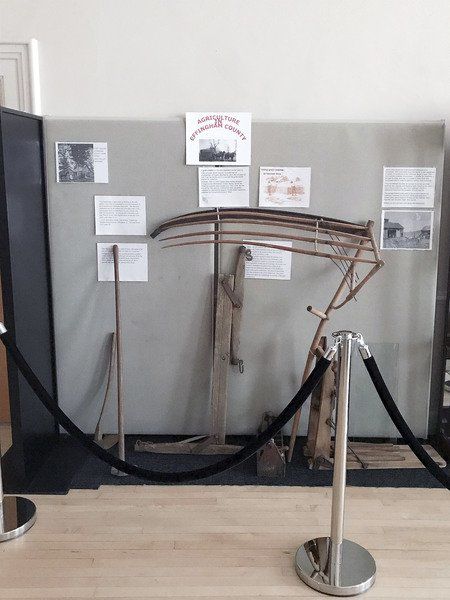 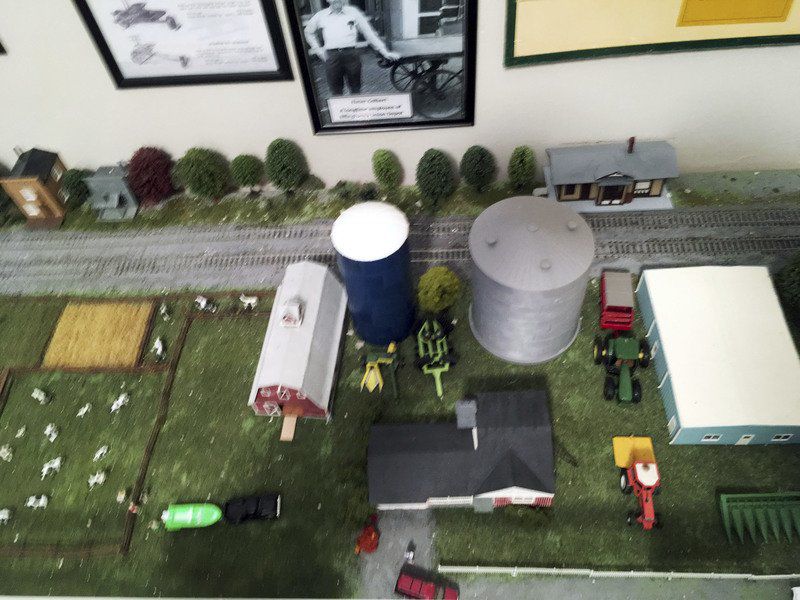 Even the casual visitor to the Effingham County Museum notices the number of displays focused on agriculture. In the first floor corridor, for instance, there is a John Deere plow; in Gallery 5 on the train table, there are scale models showing an early 20th century farm and a more contemporary one; and there is a grain elevator. On the second floor, the visitor finds displays showing old-time farm implements and tools, pictures of early farmsteads, and a display about the county fair. All the exhibits are to acquaint people with the rich history of the area.

What is that rich heritage like and when did it began? Let’s start with the latter question first.

It is the story of the struggles, sacrifices and triumphs of men and women who planted homes, schools, churches, businesses and politics in this part of the state of Illinois. The story started during the War of 1812, when the first white people began to move into the area, an area inhabited by the Kickapoo tribe.

Those early settlers opened the way for civilization to come into a vast wilderness, a land where the prairie grasses were “as tall as a man on horseback.”

These were people of sacrifice who left behind their former homes, friends, relatives, and the graves of their dead as they planted new homes in a wilderness filled with wild beasts and threats of prairie fires. Within a fairly brief period of time, they transformed the prairie land into an area which not only provided sustenance for themselves but also for distant cities. They were farmers. Their story is one which is inspiring and demonstrates the creativity and strength of the human spirit.

The very first thing the settler had to do was provide decent housing for himself and his family. In the 1883 History of Effingham County, edited by William Henry Perrin, there is a description of that process: “The emigrant, upon his arrival, began at once preparations for a shelter. During this period, the family lived in a wagon, or occupied a temporary hut made of poles, with no floor except that of mother earth, and no windows except the interstices (gap) between the logs forming the walls. Should the time of arrival be in the spring, this simple structure sufficed for a house until the crops were sown, when a more comfortable abode was prepared for winter.”

The beginnings of farming in the early 19th century occurred in a primitive environment totally void of technology. A simple hoe was the first farm implement used by all settlers. Most of the early pioneers raised their first crop of corn with that tool exclusively. However, when they were able, they seized upon the opportunity to secure a plow, made of wood with only one steel share. Those early plows were mostly drawn by oxen. Corn and potatoes were the main crops. Corn was especially important because with that crop they could have corn bread, homemade hominy and mush. That same corn supply provided the nutrition needed to fatten the hogs and feed the milk cows during the winter. As a result, corn remained the main crop for many years.

Sugar was obtained from sugar camps in the spring of the year, when the sugar maple trees were tapped to make the sweetener and syrup. Molasses (sorghum) was made with the homemade wooden cane mills, assisted by iron kettles used to evaporate it.

Another important crop was wheat. The 1883 History of Effingham County records that “in 1830, the first bushel of wheat ever planted in the county was by Judge Broom. It made a generous yield, and from here came the seed that in the after years made much of the wheat bread of our people. It was sown in what is now Mason Township. The same man planted the first orchard here in 1829. He had brought the young trees with him from Tennessee; were all grafted trees.”

Crops were cut with scythes, or cradle, and bound by hand for several years. Threshing was via a flail, or by being tramped out with horses, then cleaned as well as possible.

These early crops were purely for sustenance of the farmers; soon, however, commercial agricultural production was soon a part of the county, as well.

The first really profitable industry in Effingham County was the gathering of honey. Because there was both timber and prairie — “prairies jeweled with garden flowers” — and plenty of wild bees, nearly every tree was a hive where those insects lived and gathered their sweet treasures from the blossoms of the prairie. The settlers gathered honey and strained the wax, resulting in two money-producing products for the county. That honey and beeswax, along with ginseng, venison, turkeys, pelts and furs were marketable in St. Louis, thereby allowing the local farmers to exchange them for such articles as they wanted.

In 1912, Effingham County resident, A.F. Jansen, wrote about “Agricultural Developments in the County."

"When the growing of wheat and other cereals proved to be profitable, the improvement in harvesting machinery was something great. And went by leaps and bounds, from the time of the first easterly platform and rake, in the beginning of the sixties up to 1878, when the first grain binder was exhibited in this part of the woods. Other crops were grown to some extent, or tried at least, such as barley, but never developed very much. Oats soon became a staple, regular crop and is yet. Rice has been grown successfully by a few, but later on abandoned again. . . .As time passed on, along in the eighties, apple growing became the best paying part of the farm business, at least supposed to be so, consequently hundreds of acres of orchard were sent out until the thing was overdone, and in the beginning of the 20th century a large percent of them were cleared off again . . .”

There was also, of course, stock farming. Cows came with the first settlers. The area had good grazing land everywhere as well as opportunity to cut prairie hay for the short feeding time in winter; hence, it was very profitable to raise cows. The young stock were turned out in the spring and hunted up in the fall again, typically in good condition. Local farmers, of course, kept hogs, fed and marketed them with very little expense because they got fat in the timber on acorns and nuts. During the post-Civil War era, sheep could be seen in flocks numbered 200 and over. They lived and did well on grass and hay alone, and did not cost as much as other livestock. Because of this, by the time the 1883 Effingham County History was published, the sheep industry was the principal livestock business. In addition, many farmers had successful and prosperous businesses by raising horses and mules.

During the 19th Century and well into the 20th Century, Effingham County farmers relied on their own physical manpower and on the power of their farm animals, mostly horses, sometimes oxen. It was truly the Age of Animal Power.

Twentieth Century Effingham County, of course, witnessed tremendous change in agriculture with the great changes in the use of gasoline-powered machinery and the role of the federal and state governmental bodies. The greatest change, however, according to longtime Extension Adviser, Clinton Cutright, was the introduction of electrical power brought by the Rural Electric Co-ops financed by the Rural Electrification Administration during the 1930s.

Norris Electric Cooperative, organized September 18, 1938, brought electrical power to Effingham, Cumberland, Jasper, Richland, Crawford and part of the Clark counties in 1939. The co-op was named after Senator George W. Norris of Nebraska because of his skillful and untiring efforts to bring electricity to country dwellers throughout the United States.

The agricultural industry has changed greatly through the years in this county, and it still remains a vital part of the local economy, as well as a vital part of the rich heritage of this part of Illinois. Come to the museum. View the exhibits and marvel at the ways in which farming has enriched the history of Effingham County.