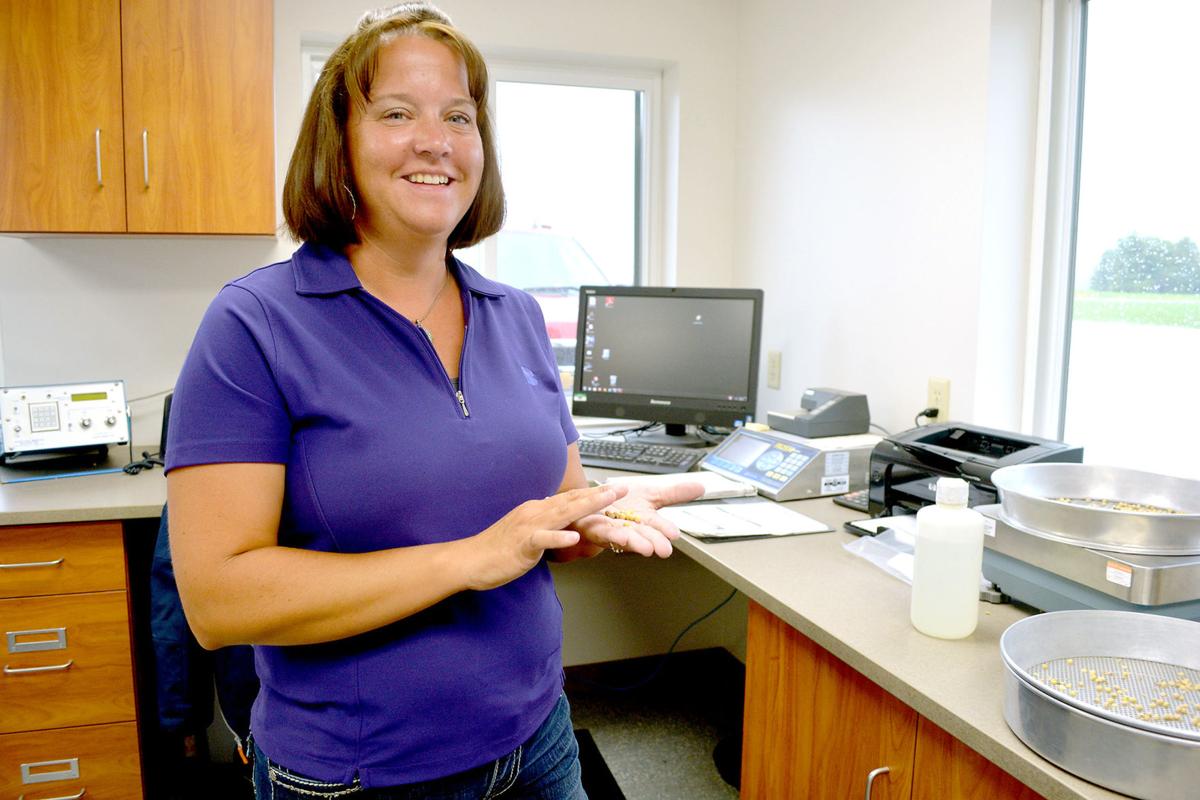 Kate Ruholl is pictured at Beck's Hybrids showing how to analyze soybean samples. 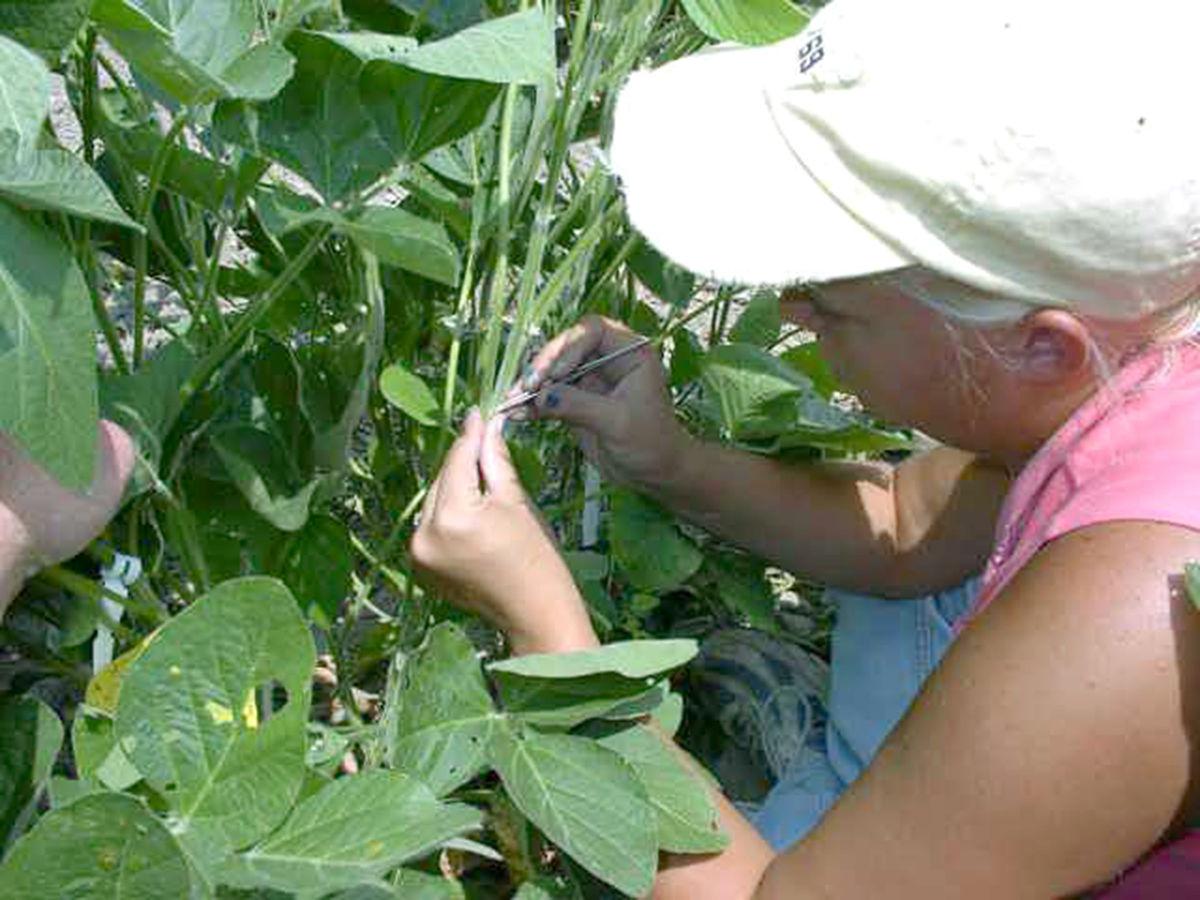 Kate Ruholl, earlier in her career, out in the field completing research.

Kate Ruholl is pictured at Beck's Hybrids showing how to analyze soybean samples.

Kate Ruholl, earlier in her career, out in the field completing research.

Women have always played a crucial role in the lives of farm families. But today, they have become active across all aspects of the agriculture industry.

They're not just active on the farm – in some cases they are the farmers. According to research completed by the 2012 Census of Agriculture, women make up 14 percent of farmers.

The percentage of women farmers has decreased slightly from the previous census, completed in 2007. But the number of women active in agriculture is still significantly larger than previous years.

“Farming is a family business, not just a job," said Effingham County Farm Bureau Manager Julie Stephens. "Women are often involved in every aspect of it.”

Stephens has been working with farmers and farm families throughout Effingham County for close to 20 years. She's seen the industry change in positive ways for women over that span.

Stephens said that Farm Bureau managers used to consist of mostly men, but now it seems the majority are women. The industry has gone through some distinctive changes throughout the years, and women are now considered equals in it, she said. That includes actively farming and working in other areas of business related to agricultural.

Kate Ruholl, of Dieterich, has found her place in working for an agricultural business, Beck’s Hybrids.

Ruholl’s father was a dairy farmer and both her grandparents were dairy farmers. Having been inspired by her family’s background to pursue a career in agriculture, she studied Crop Science at the University of Illinois.

After she received her bachelor’s degree 14 years ago, Ruholl began a career at Brown’s Seed and worked there until Beck’s Hybrids bought it. After the buyout, she moved along with the company continuing to work for Beck's in the agronomy side of agriculture.

Today, she is the Southern Soybean and Wheat Grower Manager at the Neoga facility, where she serves customers across areas ranging from Mattoon to Tennessee.

Ruholl used to do mostly research, crossing soybeans and planting research plots, while additionally working in the corn nursery. Now, she works with customers and growers to provide a high quality seed for conditioning. She finds farmers to grow Beck’s seed and organizes contracts with them.

Ruholl works with growers to additionally organize paperwork for quality field information. She oversees inspections for a wide range of growers’ soybean and wheat crops and analyzes the samples from fields and final harvest samples.

“I have never felt like I was treated differently because I was a woman in agriculture,” Ruholl said. “And maybe it’s just because it’s all I know.”

Ruholl has become accustomed to working with mostly men. Until recently, she was the only woman employee at the Neoga facility. Now, she is joined by one other woman making the female-to-male ratio two female employees to 11 male employees.

She is additionally accustomed to working with a male customer base. Because of this, Ruholl knows how to communicate and present herself in a confident manner, where she lets her ability and knowledge do the talking and not her gender.

Ruholl believes that the industry has changed over the years, becoming more accepting of women. The men of today are more accustomed to women being involved in the work. Some of the older men sometimes need convincing, she noted.

“There are definitely some growers where I’ve had to earn their respect,” Ruholl said. But once she has proven herself as a competent worker, she is not questioned anymore.

Lydia Holste and Faith Wendte are also two women involved in agriculture who understand how it can be challenging being active participants in a male-dominant industry.

The two girls are sisters from rural Altamont and are involved in ag businesses and their family’s farm.

Holste received a degree in agricultural communications with a concentration in advertising from the University of Illinois. During college, she attained internships at Case New Holland (CNH) and Monsanto. After graduation, she worked for CNH, but now farms alongside her husband, father, and other family members to assist with the day-to-day operations on the family farm. Occasionally, she is a guest blogger for Monsanto.

That experience has shown her the many ways women influence agriculture and contribute to it.

“I think we bring a certain passion for agriculture, along with a different perspective to this field,” Holste said.

She strongly believes women have a very positive impact on agriculture.

Holste’s younger sister, Wendte, is a senior at the University of Illinois, majoring in Agriculture and Consumer Economics and minoring in Crop and Soil Management.

This summer Wendte has an internship working for Monsanto as a Technology and Development Field Assistant where she monitors and maintains numerous corn and soybean plots across Southern Illinois. She still assists on the family farm by helping out on the evenings and weekends.

Being involved in farming just comes natural to both women. The sisters understand there are challenges, but have learned that men are often impressed by females who have the courage to have a strong interest and passion for agriculture.

“It takes courage to act outside of the box and be the minority," Wendte said. "It means that as a female you have to make a more concerted effort in order to gain acknowledgment and respect in this male-dominated environment.”

Holste and Wendte said they have learned to overcome the hardships.

"I think that there are certainly times and situations when working in a male-dominant industry where I automatically lose credibility because I am a female, and I have to work twice as hard to prove myself," Holste said.“I view it as a challenge, and an opportunity.”

It’s evident that both Holste and Wendte have a strong passion for agriculture.

“I feel that women in the ag industry are very focused individuals and take pride in what they do,” Wendte said. “I think the number of women involved in agriculture will continue to increase especially since the ag industry is a thriving industry.”

Whether women are business leaders or partners, farm wives or moms, they will continue to play their various parts to contribute to what agriculture is all about.