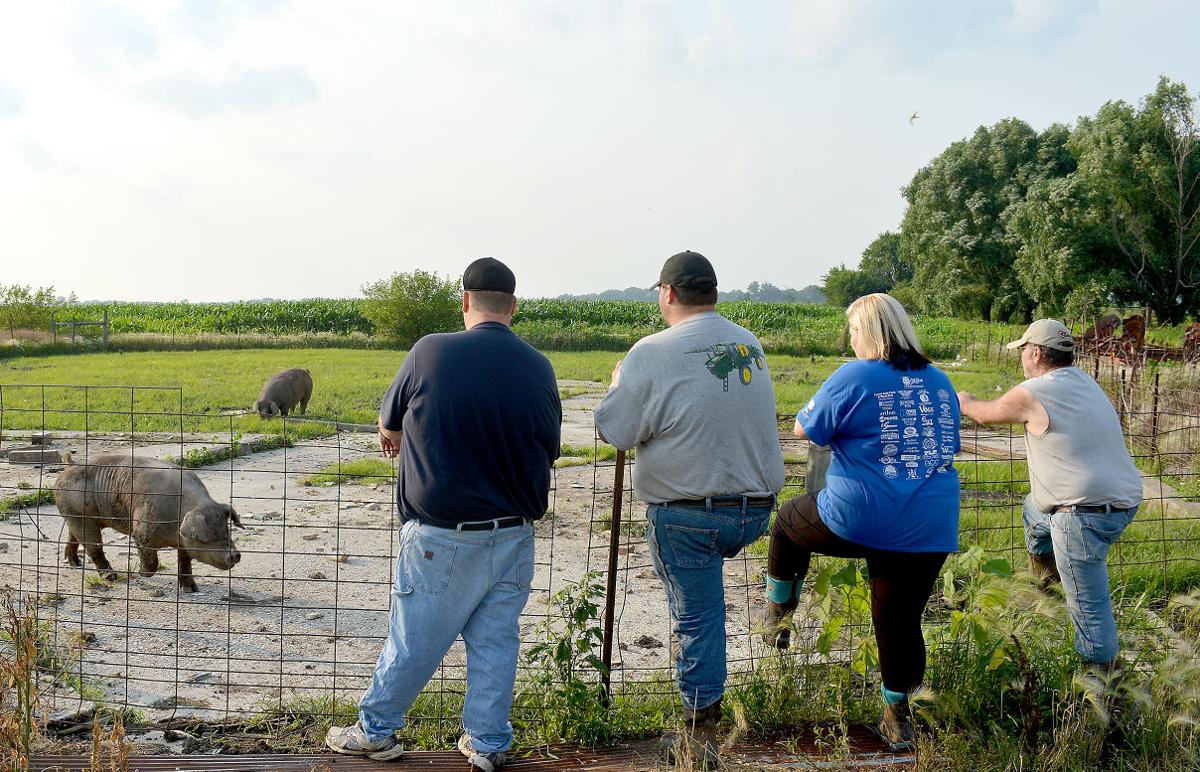 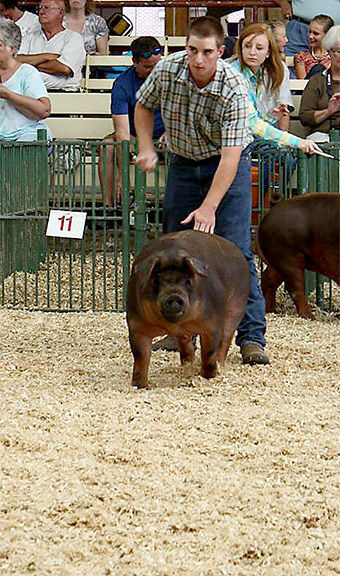 Matt Kemme is pictured showing Ben the barrow at the Illinois State Fair in 2013. Submitted photo. 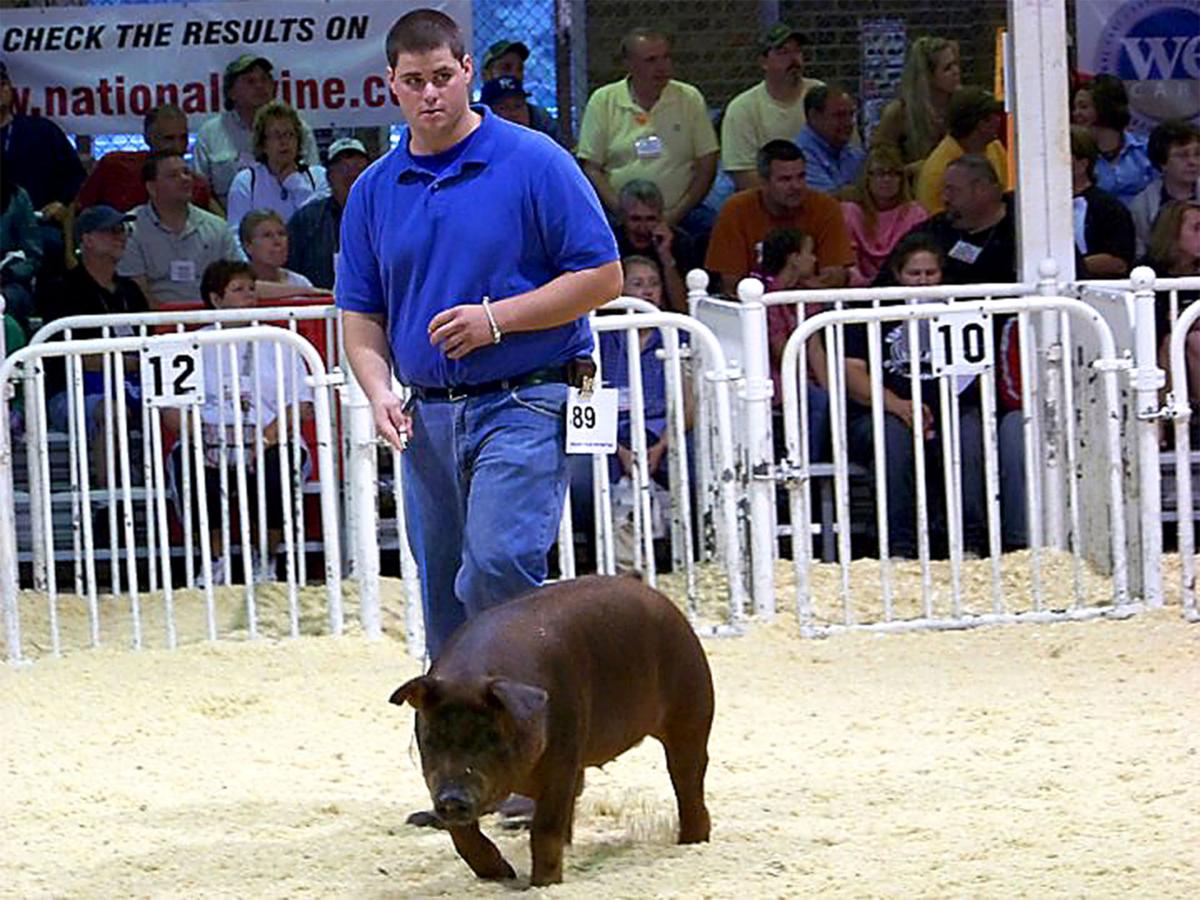 Ben Kemme is pictured showing his hog at the World Pork Exposition in Iowa in 2011. 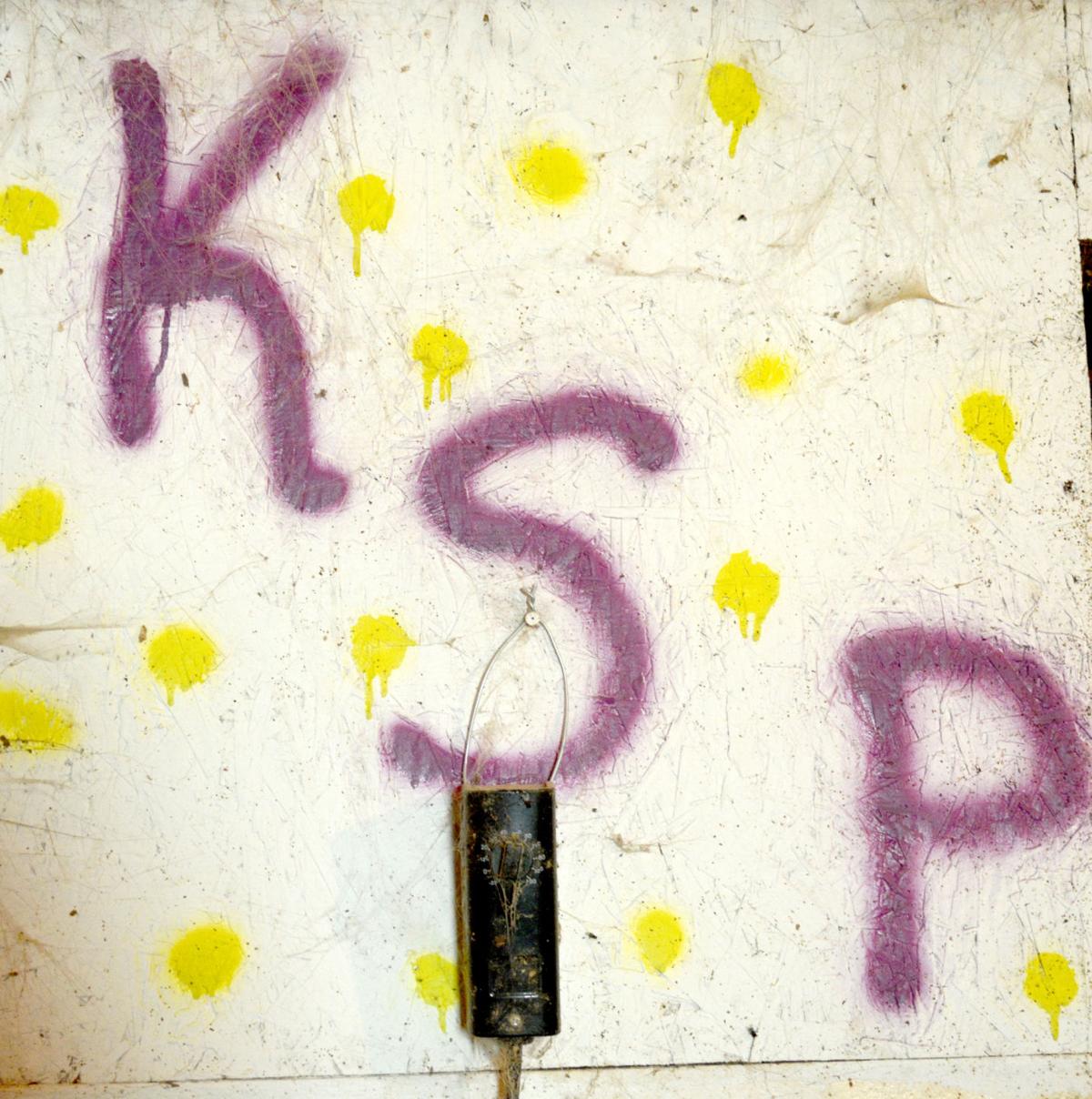 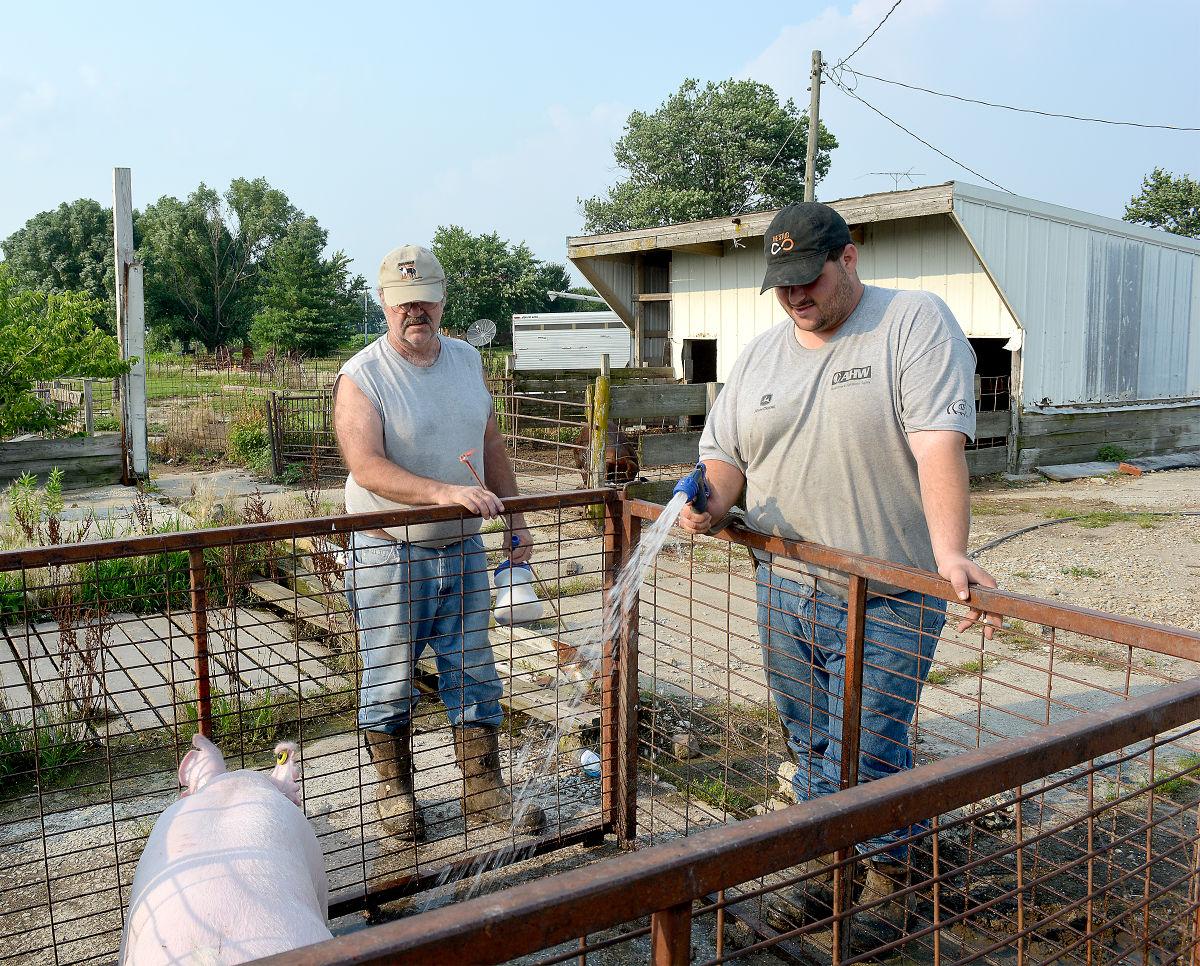 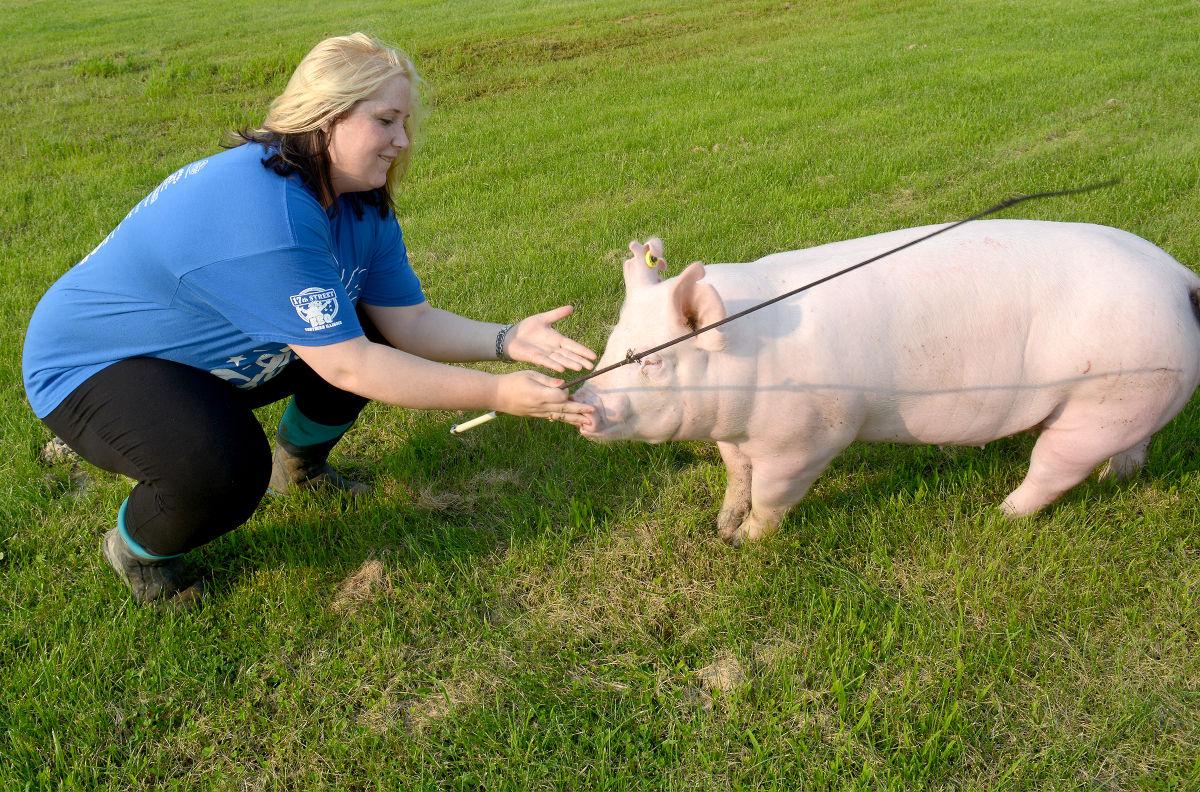 Matt Kemme is pictured showing Ben the barrow at the Illinois State Fair in 2013. Submitted photo.

Ben Kemme is pictured showing his hog at the World Pork Exposition in Iowa in 2011.

For the Kemme family, showing hogs is more than a hobby -- it’s a way of life.

The Shumway family has been in the hog business for years, but members of the clan never dreamed they would become nationally known for superior hog genetics.

The Kemmes have grown an upscale show pig operation that is known across the national show pig circuit.

As members of the family sat on lawn chairs around the porch at the Kemme farm recently, their passion for the show operation was evident. They talked glowingly of pigs and the joy of showing, smiles all around.

Mark Kemme, the patriarch of the family, and his two sons, Joe and Ben Kemme, recalled how it all began. Amanda Oldfield, Ben Kemme's fiance and an advertising representative at the Daily News, was also there. She became fully involved in the family business after meeting Ben in college.

Asked how it all began, laughter rippled around the porch as Mark Kemme explained how the tradition of showing hogs has been in the family ever since he began showing at the Effingham County Fair while he was in 4-H. And that while on his honeymoon, he and his wife stopped at the state fair to check out the pig stock.

Now, years later, his dedication to showing hogs has carried over to his sons. Even though the family recently won an award for showing hogs for 45 consecutive years at the county fair, the show operation did not begin until the second oldest son, Ben Kemme, purchased three Duroc gilts.

Gilts are female hogs that have not produced a litter yet. Ben Kemme bought them hoping to obtain hogs with premium genetics that he could later breed. He never thought that buying three hogs would eventually result in 25 sows for breeding almost eight years later.

The first year he showed, he made it to the state fair. The following year, the hog operation really began to fly. Having won Duroc Barrow Champion at the state fair, the Kemme family had shown it had a decent genetic line on its hands.

“It wouldn’t work without all of us. It’s a team deal,” Mark Kemme said.

“Once you do it, it gets in your blood and you can’t stop,” Ben Kemme said.

The family has won numerous titles, showing throughout the country. No single person takes credit for the win. Recognition is shared, since each Kemme pitches in while showing.

The family had two more siblings, Amanda Rogers and Matt Kemme, who also help the family business. Rogers’ son competes in shows representing the family’s hogs. Matt Kemme, even though away at college, still comes home and helps out on the farm.

The family usually has around 100 piglets born every fall and spring – in August or September and January or February. The piglets are raised until they reach around 50 pounds. Then they are sold as feeder pigs.

The family sells the pigs via online auctions, bringing an average of $300 to $400 each. The most the family has ever sold a pig for was $4,000 or $5,000. For the auctions, potential buyers see a picture that Oldfield has taken before they place bids.

The family holds online auctions two to three times a year, depending on how many piglets are available.

Since the family does not have their own boars, which are intact males capable of breeding, they order semen for artificially inseminating the females.

Picking which boar's semen to order is sometimes difficult. Even though it can be a game of chance, the family tries to consider what boar would produce premium hogs when paired with the family's own sows or gilts.

Since the family is making a profit and enjoys showing, Ben Kemme talked about possibly expanding. Mark Kemme shook his head and said the farm has already expanded past his expectations.

Ben Kemme hopes to have a boar operation of his own some day – so the family doesn't have to order semen for breeding. Since the family is successful in their hog business, Ben Kemme wants to to expand.

The Kemmes say there's sort of a love-hate relationship with other people who show. It may be about competition in the ring. But outside of it, other people in the business can be like family.

“It’s a family-oriented business,” Ben Kemme said. “You go to shows and it’s all other families there.” They truly enjoy caring for the animals, and enjoy people who share that passion for hogs.

A key to being successful in the show ring is communication. Although fellow competitors may be seen as a threat while the show is taking place, they could also be future customers or connections.

After selling the hogs, the Kemmes keep in touch with the buyers. They often go on farm visits if the buyers live in a 50-mile radius. The family enjoys seeing how their hogs are managing at the new homes, and the family enjoys interacting with previous buyers by giving pointers on how to improve the hogs.

As the family continued to talk about the hog operation, Ben Kemme kept glancing down at his phone. Although Mark Kemme told him to put his phone away, Ben Kemme demonstrated the connections made by showing hogs by watching a video that a previous buyer just sent to him. It's an example of his dedication.

“I get videos every week,” Ben Kemme said.

The family hopes that the operation will continue its success and span throughout more generations.

Even though the hog industry has changed over the generations, the basis and tradition is similar as the love for hogs is still present. The Kemme family will continue showing hogs and caring for the animals they all dearly love.