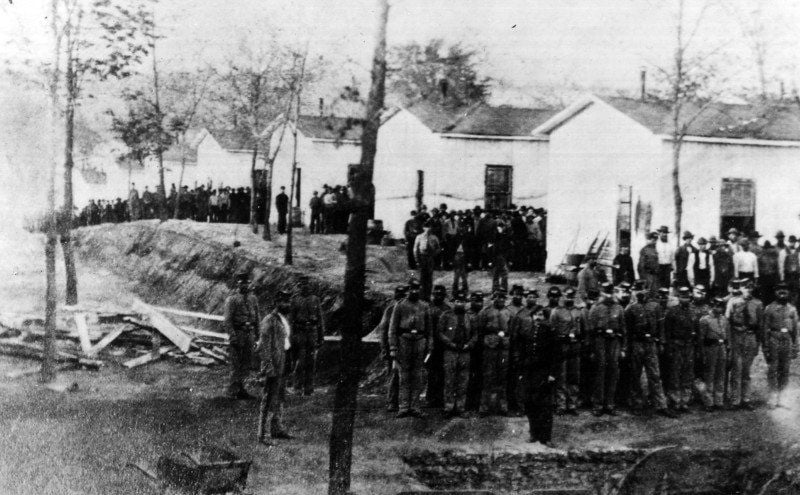 Rock Island prison barracks prisoner of war camp showing a roll call with Union guards in the foreground and POWs in the rear by their barracks in 1864.Photo courtesy of Rock Island Arsenal Museum 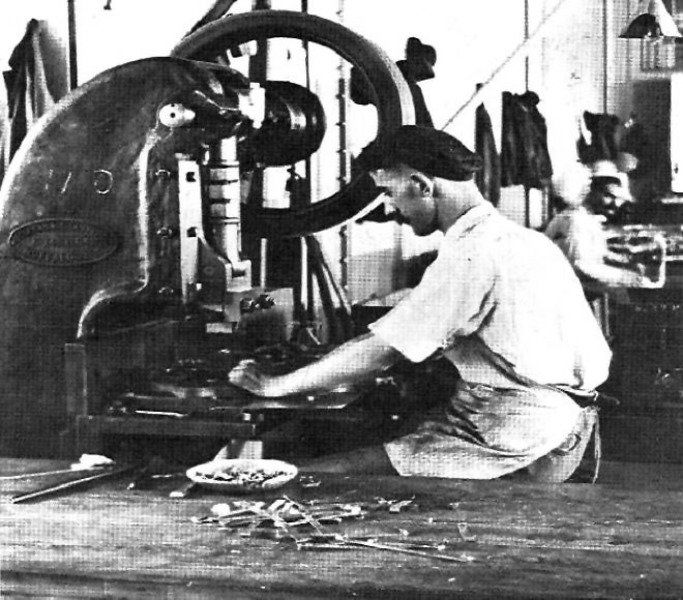 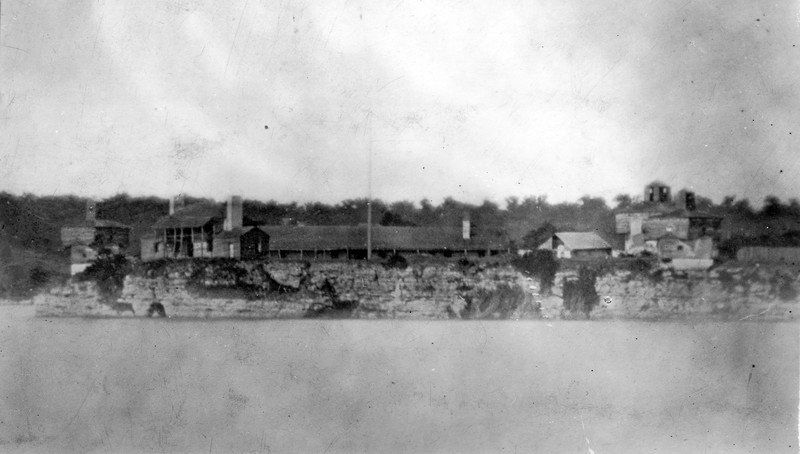 Fort Armstrong on the south end of the island as it looked from Rock Island around 1850. Photo courtesy of Rock Island Arsenal Museum. 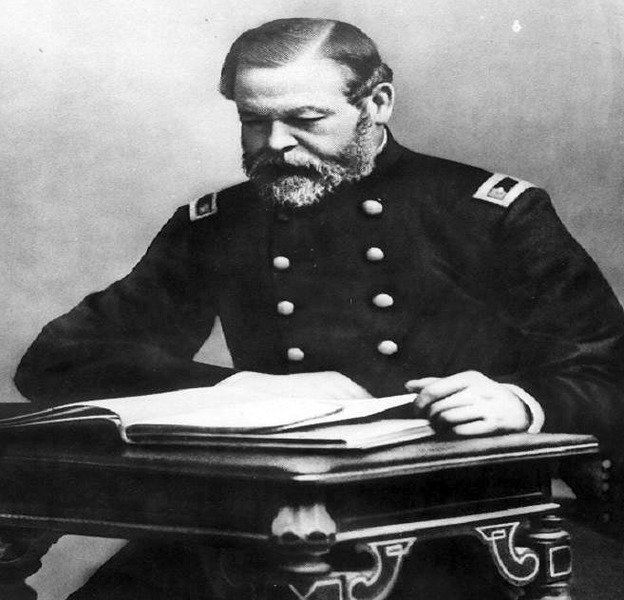 Brigadier Gen. Thomas J. Rodman, the "Father of Rock Island Arsenal," commanded the base from 1865 until his death in 1871. He shifted its mission from storage and maintenance to manufacturing and designed the 10 stone shop buildings and ancillary buildings that made up the "great National Arsenal" as well as the original houses.

Rock Island prison barracks prisoner of war camp showing a roll call with Union guards in the foreground and POWs in the rear by their barracks in 1864.Photo courtesy of Rock Island Arsenal Museum

Fort Armstrong on the south end of the island as it looked from Rock Island around 1850. Photo courtesy of Rock Island Arsenal Museum.

Brigadier Gen. Thomas J. Rodman, the "Father of Rock Island Arsenal," commanded the base from 1865 until his death in 1871. He shifted its mission from storage and maintenance to manufacturing and designed the 10 stone shop buildings and ancillary buildings that made up the "great National Arsenal" as well as the original houses.

In summer 1814, skirmishes between the U.S. and British-backed warriors under the leadership of Black Hawk flared up and down river from Rock Island.

Since 1803 the U.S. had owned both banks of the Mississippi River. Lt. Zebulon Pike had reached the Rock Island in 1805 and immediately recognized its strategic and tactical importance. The Rock Island Rapids raced for 12 miles upriver. From Rock Island, the Army could control the entire Upper Mississippi River Valley by controllingthe rapids.

Locally, the Sauk and Meskwaki, led by Black Hawk, opposed a disputed 1804 treaty that transferred over 50 million acres of land to the U.S. An Army post on the island could also keep an eye on Black Hawk and his followers.

The battles of 1814 confirmed to the Army that it needed a presence on Rock Island. In May 1816, Fort Armstrong was built on the downriver end of the island. The small Army contingent there was tasked to control the Upper Mississippi River Valley by monitoring the Rock Island Rapids; maintaining observation of assumed anti-American Sauk Indians in the area; maintaining peaceful relations between the local Native American tribes; and, later, providing security as settlers moved into the area.

Resistance from the Sauk culminated in the Black Hawk War of 1832. Fort Armstrong served as an administrative and logistic center for the war. Treaties after the Black Hawk War pushed Native Americans west of the Mississippi and, as a result, Fort Armstrong’s security role was transformed into a logistics mission as a supply depot. That role ended in 1845 after supplies were issued for the Mexican War.

Important meetings were held in George Davenport’s home in 1845. Not a single bridge crossed the Mississippi River and Rock Island was the only location where engineering of the day could build a commercially viable railroad bridge.

The bridge could jump from the Illinois mainland to the island and then over the shallow rapids to Iowa. After 11 years of wrangling and overcoming resistance from the federal government, the first rail bridge over the Mississippi River opened in April 1856 spurring industrial and settlement growth in the area. Rock Island, using water and rail, became the transportation hub of the United States. Eventually, the Transcontinental Railroad crossed the island.

In the late 1850s the Army was looking for a depot to supply the Army on the frontier.

The bridge and rail distribution network, coupled with steamboat traffic and federal ownership of the Rock Island, influenced the decision to create the Rock Island Arsenal.

President Abraham Lincoln signed legislation creating the Arsenal as a maintenance and storage facility on July 11, 1862. In 1863, construction started on a warehouse that is now called the Clock Tower.

That building was not completed until 1867 and by then the mission had changed to manufacturing. With the end of the Civil War, plans were drawn up by Brevet Brigadier Gen. Thomas Rodman for a much larger complex. Construction began in 1866.

That construction was an economic driver as Rock Island Arsenal became the largest federal public works project of the 19th century. The Arsenal produced artillery carriages and caissons, saddles, eating utensils, canvas products, bayonets, and, after 1903, rifles. It manufactured, repaired and stored everything a soldier needed.

The Arsenal’s first major support to an American war was in 1898 during the Spanish-American War. Rock Island Arsenal became known for both speed and quality. As a result, it became the artillery development center for the Army.

During World War II, the Arsenal saw its greatest employment with almost 19,000 people on the island. A huge repair parts operation utilized the rail links east and west to the coasts. In addition, machine guns, artillery, tanks, aircraft engines and other goods were produced and sent to the fighting fronts.

The Arsenal was also critical to support in the Korean and Vietnam wars. As the size of the Army and the requirement for manufacturing declined, other higher commands were located on the island. Today 1st Army, Army Sustainment Command, Joint Munitions Command and the Arsenal itself operate on the island.

Today, the Arsenal more quietly continues to support the Army. In 1990-91 critical parts were made and shipped to support Operation Desert Storm. In 2003, when opposing forces began to ambush U.S. vehicles with roadside bombs, the Arsenal produced the first professional armor kits for Humvees in just weeks. Rock Island Arsenal has one of only two foundries in the Department of Defense and with modern technology can make one or 1 million of any item needed by the armed forces.

While known and respected across the armed forces for its products, in the neighboring community the Rock Island Arsenal remains an economic engine and premier employer. Also on the island today are a national cemetery and a Confederate Cemetery holding the remains of Confederate prisoners held on island between 1863-1865.

A monument to the First Bridge is on the island, along with George Davenport’s house which hosted the meetings that planned that bridge. In addition to that modest home, the island is also home to Quarters One, the largest house in the Army and second in size only to the White House in the federal inventory.

The Rock Island Arsenal Museum, the second oldest museum in the Army system, tells the history of the Arsenal and has over 1,200 weapons on display. The Lock and Dam Visitor Center tells the story of the first completed Mississippi River navigation lock and dam that, when completed in 1933, removed the obstacle of the Rock Island Rapids noted by Zebulon Pike in 125 years earlier.