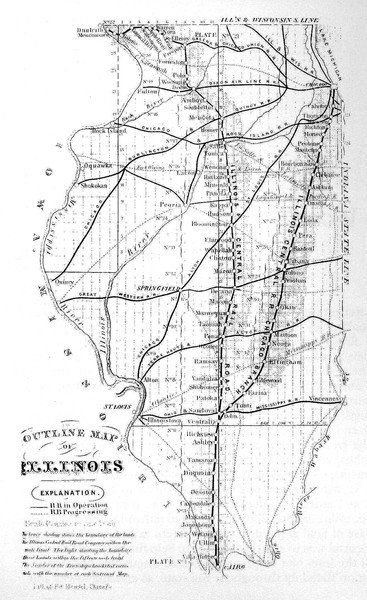 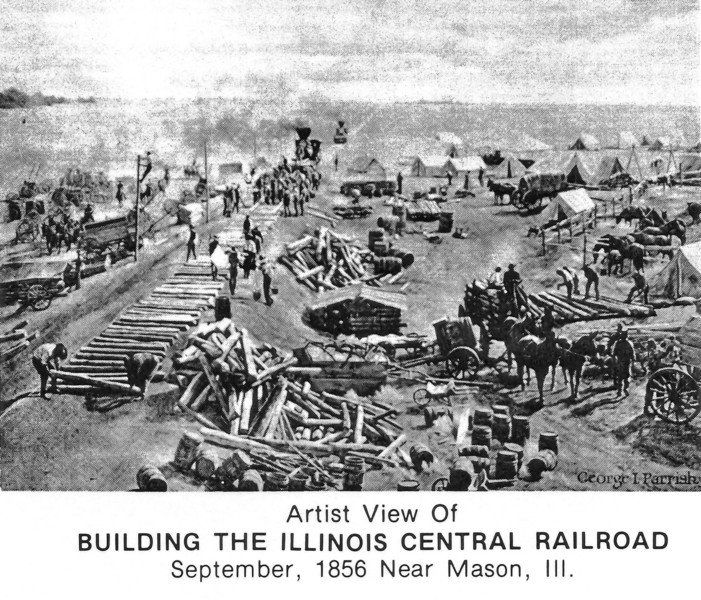 Submitted imageArtist George I. Parrish’s depiction of the building of the Illinois Central Railroad near Mason.

Submitted imageArtist George I. Parrish’s depiction of the building of the Illinois Central Railroad near Mason.

There were two basic factors that had an impact on the development of Effingham County: The path of the National Road and the construction of railroads through the county, according to the book “History of Effingham County, Illinois,” edited by William Henry Perrin, published in 1883.

The first railroad to pass through the county was the north-south Central Railroad, commonly referred to as the “Brough” line. It was completed in 1855 and freight trains started their journey from the North to the South. The rails connected Chicago with Cairo, Illinois, making their way through Effingham.

The first passenger train to known to travel the Chicago-Cairo route came though the Effingham area on January 1, 1856. It is said the local population became aware of the importance of the newly constructed railroad.

In February of 1865, a charter was granted for building the St. Louis, Vandalia and Terre Haute Railroad. A final contract was signed in Vandalia on Nov. 14, 1866 with additional agreement signed on Nov. 28, 1866.

A contract was finalized in Feb. of 1868 insuring the new railroad would span from St. Louis, Missouri, to Pittsburgh, Pennsylvania, through Indianapolis, Indiana. The lease was made out for 999 years to the Terre Haute and Indianapolis Railroad Company.

It was noted that since the east-west railroad was completed through the Effingham area, it brought with it a significant increase in business for the farming industry and other industries positioned along the line.

The St. Louis, Vandalia and Terre Haute section of the railroad spanned 158 miles from East St. Louis, Illinois, to the eastern state line, of which 25 1/2 miles rested in Effingham County.

Several hurdles, litigation, contracts and negotiations had to be overcome throughout the years in order to complete both the north-south Central Railroad and the east-west railroad commonly known at the time as The Vandalia Line.

Railroads also had an impact on a couple of the first communities established in Effingham County.

The village of Freemanton was laid out on June 21, 1834 in an area between Effingham and Altamont taking advantage of the National Road that passed through the new community. Freemanton was described as once a flourishing community becoming quite a business point with a post office, blacksmith, a tavern. A stage stand was built to accommodate stagecoaches traveling through the village on the National Road.

It is said the building of The Vandalia railroad line brought the village of Freemanton to its end. The villagers moved away to cash in on the opportunities the new railroad brought to the area.

Altamont was laid out by J.W. Conologue, then surveyed and platted by C.A. Van Allen on July 19, 1870. Conologue was the first superintendent of The Vandalia Railroad and felt the east-west Vandalia intersecting with the north-south Springfield Division of the Ohio and Mississippi railroads was a desirable place to start a town.

The first train to run from north to south from Streator to Altamont was June, 29, 1874.

Bristol, a small village south of Mason, was abandoned after everyone moved to Mason, a village on the Illinois Central Railroad tracks.