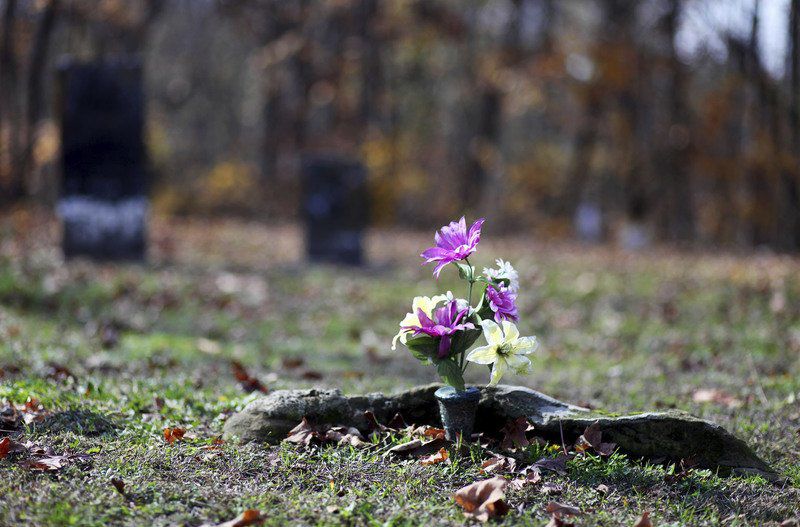 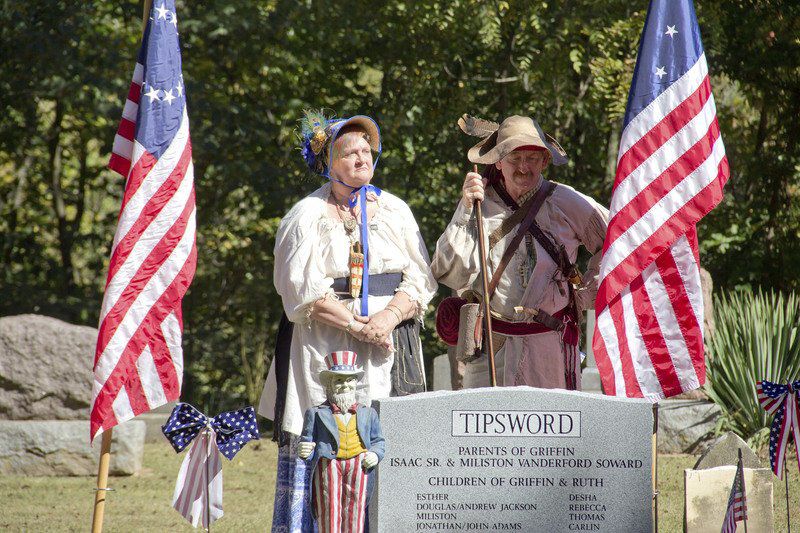 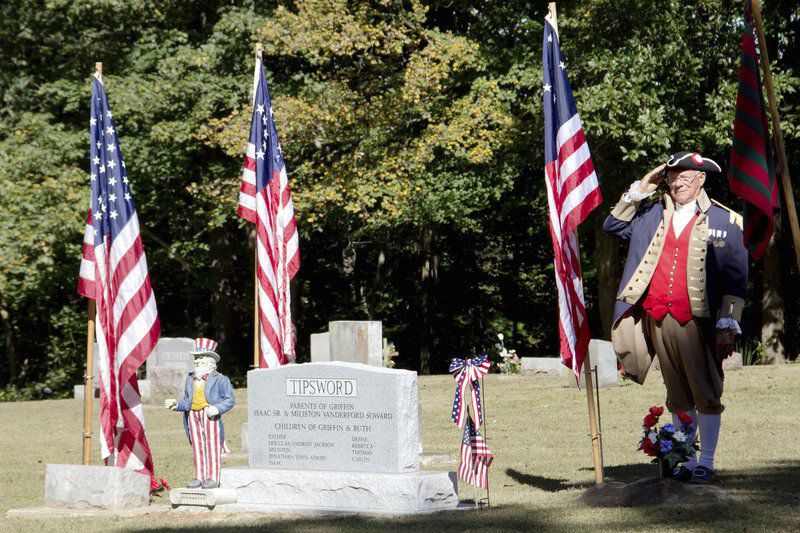 Daily News file photosA new tombstone for the Tipsword family was honored by many in 2013, including Jim DeGroff of the Illinois Society Sons of the American Revolution. To the left of the new tombstone is the old sandstone headstone that identified Griffin and Ruth Tipsword’s gravesite.

Daily News file photosA new tombstone for the Tipsword family was honored by many in 2013, including Jim DeGroff of the Illinois Society Sons of the American Revolution. To the left of the new tombstone is the old sandstone headstone that identified Griffin and Ruth Tipsword’s gravesite.

Shelbyville resident Charla Fischbach has a special connection to Effingham County. She is the descendant of the first white man to settle in the county, Griffin Tipsword.

Griffin was a young boy when his parents undertook their journey from the Delaware/Maryland area to Rowan County, North Carolina. In 1779, Griffin at age 24 enlisted in the Revolutionary Army in Rowan County, North Carolina, and by his own account was discharged by General George Washington on October 20, 1781. After his service to his country, he returned to the area where his grandparents lived in Queen Anne County, Maryland.

Fischbach said he was taxed as a single man in 1782 and 1783. A pension claim statement states that he traveled to Boonesborough, Kentucky, in 1783. It is possible that he may have explored a large area encompassing Kentucky, Tennessee and the Carolinas for five or six years from 1788-1789.

Boonesborough is where he met and married his wife, Ruth. Family lore has indicated Griffin as having an Indian wife. A book titled “Shawnee Heritage I” shows Ruth to be the daughter of a white James Abbott and an unnamed Chalakatha woman making Ruth half Chalakatha-Metis.

In 1789, Griffin returned to Greenbriar County, Virginia, which became Monroe County. His brother, Thomas, assigned him 83 acres located on the Headwaters of South Fork Creek of Dropping Lick Creek on April 18, 1789. He paid taxes on this land from 1789 through 1798. In 1815, the property was sold for non-payment of taxes for the years 1799 and 1800 for the amount of 64 cents.

Fischbach said that in reviewing the Census and tax records, it is apparent that Griffin traveled extensively. Griffin moved his family again to Ohio between 1802 and 1803. They bought 50 acres of land in Fayette County, Ohio, on Paint Creek in Jefferson Township on March 1, 1813. They sold the land less than 3 months later on May 22, 1813.

Fischbach said that by 1817, Griffin had moved his family from Ohio to Illinois by way of the Ohio River. In Griffin’s Revolutionary War pension claim, he states his discharge papers were “sunk in the Ohio River.” After coming to Illinois, he and his sons explored and hunted to the north and west of Waconteby Township. Griffin would often stay with the Kickapoo Indians who resided in the Effingham/Fayette/Shelby County areas of southcentral Illinois. It is reported that he named the Big and Little Moccasin Creeks from all the moccasin tracks that he saw along the creek banks.

When he and his Indian friends went north to hunt in a larger creek area, they found it to be infested with wolves, so he called it Wolf Creek. He also named an Indian village “Boo Hoo” because of all the babies crying when he entered.

According to Fischbach, in 1821, Griffin and several other white families were living in the northwest part of Gallatin County, Illinois. They lived in close proximity to the Delaware Indians. The relationship between the two groups was good until one day two drunken Indians came to Griffin’s home.

One went to sleep in the yard and the other went into the house and began to mistreat the youngest son, Thomas. Griffin tried to get the drunken Indian to leave but a fight ensued. The Indian was about to kill Griffin when his son Jonathan grabbed a rifle and shot the Indian dead. Griffin then went to the Indian village and told the chief that one Indian had killed the other. The chief did not believe Griffin. Several of the white settlers, through this, had created a serious problem and told Griffin that he and the family should move.

In the spring of 1821, Griffin and his family moved to the Effingham/Fayette County area. It was reported they did this in the dead of night. This is reportedly when they changed their last name from Soward to Tipsword.

According to Fischbach, the family spent the winter of 1821-22 in Coles County with friends. The following spring they moved back to the present day North Loudon Township area of Fayette County. In 1824, Griffin, Ruth and family settled in the Wolf Creek area of Fayette County, which later became part of Effingham County. The area is located a couple miles south of Beecher City. This was the place where Griffin and Ruth Tipsword finally ended their lifetime of wandering. It is generally believed that they had nine children.

Griffin Tipsword died in 1845 and was buried in the Tipsword Cemetery between Beecher City and Moccasin. The grave was originally marked with a piece of sandstone. According to the Effingham Daily News, in October 2012, Charla Fischbach of Shelbyville, a descendant of Griffin Tipsword, raised money for Griffin and Ruth’s gravestone. In September 2013, a tombstone dedication was held. The headstone identifies Ruth, Griffin and their children and has an engraving on the back that signifies their trek across the country from the Appalachian Mountains that they crossed, to the Ohio River they floated down into Southern Illinois and the log cabin they built from Central Illinois timber upon settling the area.