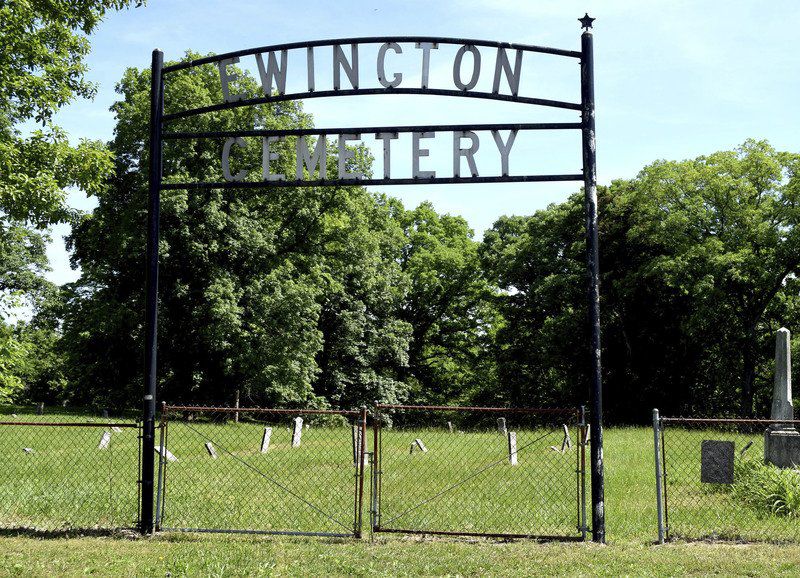 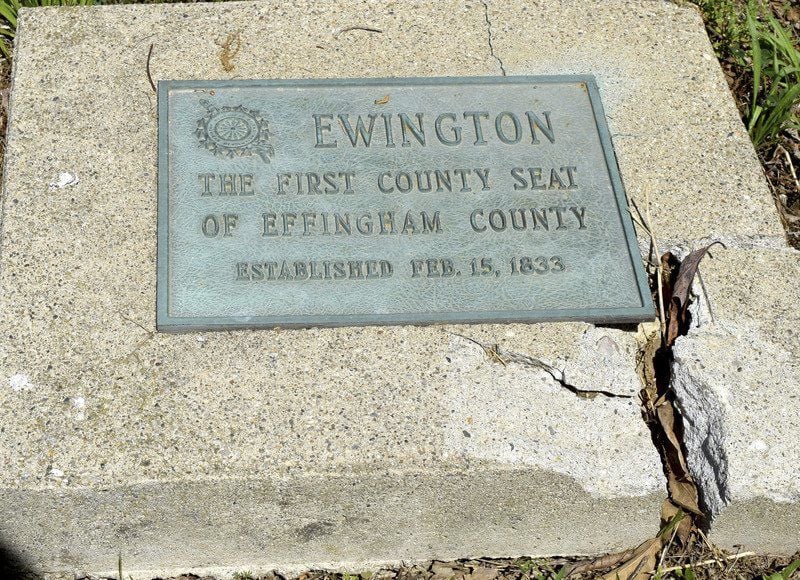 Ewington, Illinois, is truly a town and county seat that has ceased to exist.

It was located on the western bluff of the Little Wabash River, where workmen put up lodging while they worked on the National Road, which was being built. Most of the work was removing the trees and grading the hills where the road would run. Today the only original thing left of the old town is the cemetery on the south edge of what was the town.

We are told from Perrin’s “History of Effingham County in 1883” that it was estimated that around 300 people lived there. Today it is hard to visualize what Ewington must have looked like as so much has been changed to the land where the old town stood.

There is a street map of Ewington on file in the Effingham County Museum, which shows streets and lot numbers of the plat that was made setting up the old town. When you overlay that plat onto the surface of today you find that the St. Louis, Vandalia and Terre Haute Railway in 1870 passed almost through the center of the old town right over the path of the National Road. The railroad cut a 20- to 25-foot-deep channel through the land and used the fill to level the river bottom and hollers to the west of Ewington. U.S. Route 40 makes a curve on the north side of the old town missing the old courthouse and estray pen to the west and then exiting on the south side of the old town.

There is not a lot of first-hand information of what Ewington was like but there are some first-hand accounts recorded that we can gain some kind of idea. Ewington was named after General W.L.D Ewing as he was the man who pushed the bill through from the state capitol located at Vandalia. His bill split Effingham County off from Fayette County in 1831 but it would take several years before the courthouse was made and the county machinery ready to function. We know that when they were selling off the lots to Ewington that the county purchased whiskey for the sale. How much it improved the sale of lots is left by the reader to be debated.

In the beginning, Ewington did not enjoy a very savory reputation for on September 7, 1842 William Oliver, an Englishman writing a guide for immigrants coming to Illinois, writes “Ewington is a sorry-looking place, situated on a high clay bank of the Little Wabash, which is here an inconsiderable stream, deeply cut into the surface of the country, and jammed full of driftwood. It would have been quite impassable at this place for horses, had it not been for a primitive and rickety wood bridge, erected across the chasm.” and was advised by a person from the area to avoid lodging in Ewington and stay with the squire that lived a mile east of the town. The only place in the county that had a least savory reputation than Ewington would be Freemanton or Xroads as it was called two miles to the west.

The workers of the road were of the coarsest and roughest sort and many Saturday night fights would ensue when these men came into the settlements looking for alcohol and entertainment. Fist-fights and carousing were common place and many of the drunks were allowed to sleep off their overnight flings in the county jail that was made of logs and the door was propped shut with a good stout timer braced between the ground and door. After paying their fine to the county, they were released to go back to their respective job sites.

This pattern would also be continued up into the 1850s as the Illinois Central Railroad was being built and carousing would occur when the work crews came into town. When Teutopolis had the Bishop come for its church’s dedication in 1853, a group of T-Towners met his stage at Feemanton and escorted him from there through Ewington to Teutopolis ostensibly to be a body guard for him.

Brawling in early Illinois has a long history and is in no way limited to Ewington. Men would get into a physical confrontation, especially if one were a stranger and after one would beat the other into submission the winner and loser, along with many spectators, would retire to a local watering hole for a friendly drink. A couple of men who came to Ewington were truly terrifying to the local residents when they came to town. In an earlier engagement, these two took to brawling and in the course of the brawl one man bit the nose off of the other man. Biding his time, the man who lost his nose enticed the man who bit off his nose to another brawl. He then extracted his revenge by biting off his opponent’s nose. The men took to wearing ill-fitting leather noses and when they would be sufficiently intoxicated would take off their fake noses and run through the streets terrifying the women and children of the village.

Another resident was Charles Kinsey, who had come to Ewington from the east with his wife. He wore store-bought clothes and ran a boarding house along the National Road. He was fond of cards and would frequently engage in high-stakes poker games and if he started losing too much his wife would emerge from a side room and chase him out of the game into the streets with a buggy whip. Some folks thought that this was done as a scam rather than a chance happening as she never seemed to mind when he was winning. One day during a winter snow all of the townspeople were out with their horses and sleighs enjoying the event. Kinsey hitched a cowhide to his fine team and lying on top of it proceeded to startle and upset or run off every team he came across in the streets and delighted in it.

We also know that the Ewington Postmaster, who was also the local newspaper editor, was arrested for stealing items from the mail. I have been unable to find out what happened to him as there is no mention of it in the Ewington papers but other papers in the state published the news.

Like other towns, Ewington did grow and have its fair share of shops and commerce. The Blackball Stage Line would run two stages East and two stages West out of Ewington in 1857. Riding on the stage must have been quite an adventure for history records that many times the stage was upset and the passengers had to get out and right it for the journey to continue. It also had its millinery shops, cooper shops, blacksmiths and wagon makers. One early Ewington blacksmith advertised that he made traps that were strong enough to hold a bear or an elephant. But I doubt there were many elephants in early Ewington he could try his claim on.

Ewington’s demise would come with the relocating of the county seat to the new and upstart town to the east called Effingham on December 22, 1859. The town lay adjacent to the tracks of the Illinois Central Railroad and it provided a dependable roadway year-round. There were claims of fraud and collusion but the courts found in favor of Effingham and anything that could be moved from Ewington to the new town was done. The old courthouse was later turned into the poor farm for the county. The conditions that the state found the inmates to be in were deplorable even by the standards of other county poorhouses.

So, eventually the old courthouse was demolished and the last vestiges of the old town faded away... except for the memories.