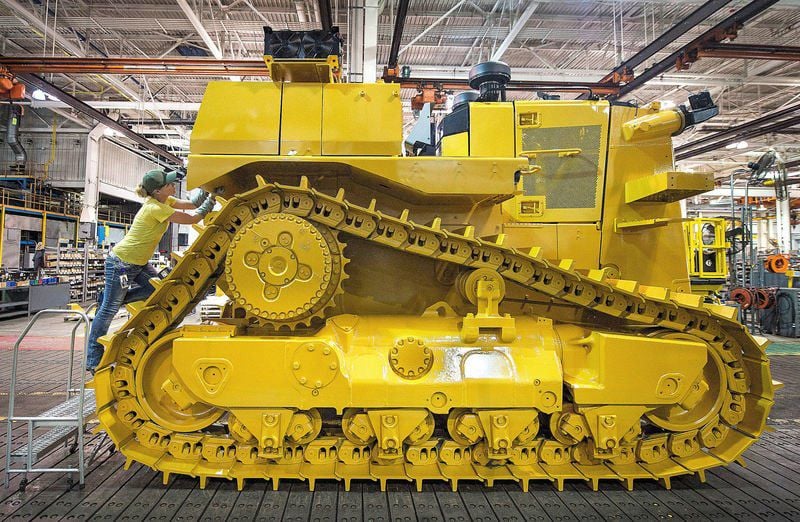 East Peoria’s Building SS is the manufacturing home of Caterpillar Inc.’s D10, a trendsetting track-type dozer that is one of Caterpillar’s largest dozers in the company lineup. The company celebrated the 40th anniversary of the D10 in 2017. The D10 represented a significant advance in the design of tracks using an elevated sprocket.FRED ZWICKY/JOURNAL STAR 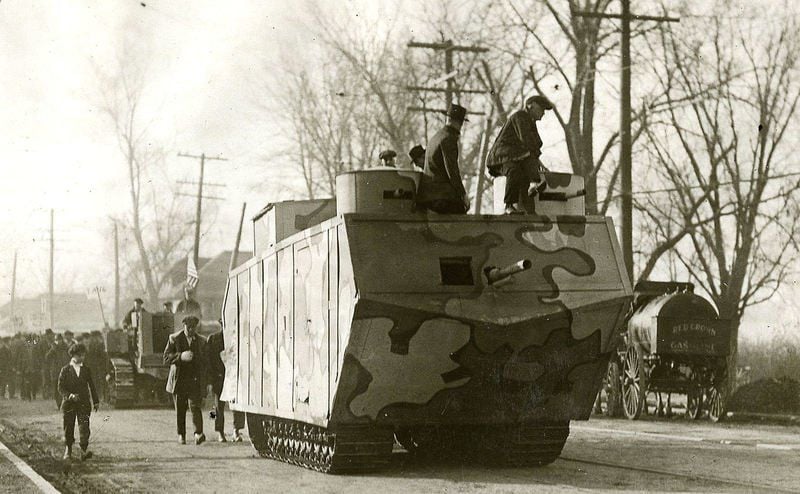 The Holt 45 Long Track prototype tank rolls through Peoria during a parade on Nov. 11, 1918. Holt, one of the companies that would later become Caterpillar Inc., played a big part in World War I.PHOTO COURTESY OF CATERPILLAR INC. 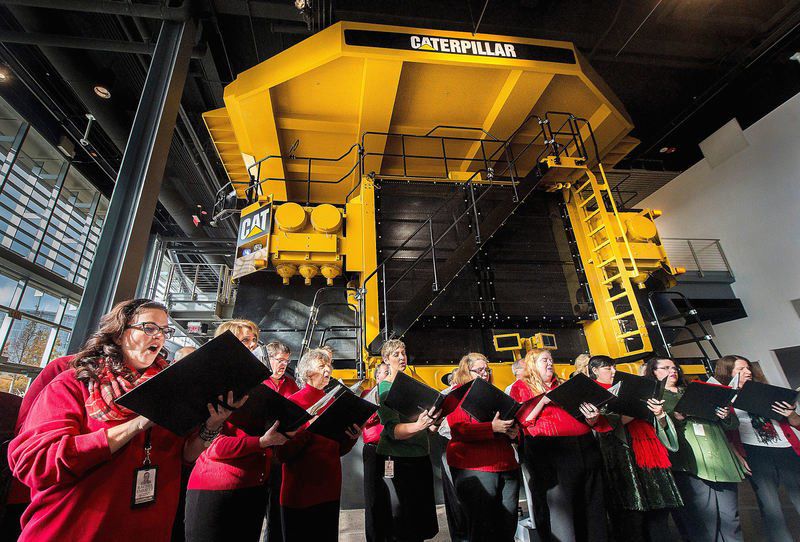 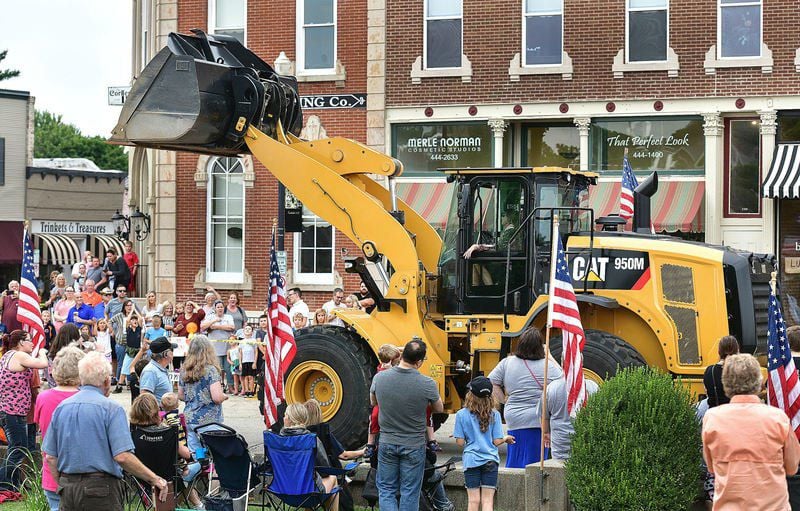 A giant Caterpillar wheel loader processes through downtown Washington, Illinois, on July 22, 2018 as part of a parade that honored first responders who helped the city recover and rebuild after a massive EF-4 tornado leveled more than 1,100 homes in 2013. Caterpillar end loaders were instrumental in helped clear the debris.FRED ZWICKY/JOURNAL STAR

East Peoria’s Building SS is the manufacturing home of Caterpillar Inc.’s D10, a trendsetting track-type dozer that is one of Caterpillar’s largest dozers in the company lineup. The company celebrated the 40th anniversary of the D10 in 2017. The D10 represented a significant advance in the design of tracks using an elevated sprocket.FRED ZWICKY/JOURNAL STAR

The Holt 45 Long Track prototype tank rolls through Peoria during a parade on Nov. 11, 1918. Holt, one of the companies that would later become Caterpillar Inc., played a big part in World War I.PHOTO COURTESY OF CATERPILLAR INC.

A giant Caterpillar wheel loader processes through downtown Washington, Illinois, on July 22, 2018 as part of a parade that honored first responders who helped the city recover and rebuild after a massive EF-4 tornado leveled more than 1,100 homes in 2013. Caterpillar end loaders were instrumental in helped clear the debris.FRED ZWICKY/JOURNAL STAR

Peoria wasn't always a company town. It was a distillery town, a farm implement town and a river town before the Caterpillar Tractor Co. set up shop.

A bond developed between company and town that became a mutually-beneficial relationship.

Caterpillar rose to international prominence on the strength of rugged, reliable earthmoving machines while the Peoria area gained jobs — not only in bustling factories but at the headquarters of a Fortune 100 company, a rare distinction for a city of a population of 100,000.

But in 2017, that symbiotic relationship underwent a dramatic change. Caterpillar announced two things that reverberated across central Illinois: one, the company ditched plans for an expansive office project in Downtown Peoria that Caterpillar had promised with great fanfare just two years earlier, and, two, the corporate headquarters would move to the Chicago area.

Peoria would remain Caterpillar's “home,” the company stated, emphasizing that 12,000 employees would remain in central Illinois while some 300 executives and staff would work out of corporate offices in Deerfield.

Peoria Mayor Jim Ardis expressed appreciation for the employees that stayed behind but called the news "a punch in the gut." State Sen. Dave Koehler said, "It's something that everyone feared, but had hoped would never happen."

The city now has fears of future announcements from Caterpillar management, headed by new CEO Jim Umpleby and board chairman Dave Calhoun, who heads the Blackstone Investment Group, that more jobs might be sent out of town.

While Peoria was jolted by Caterpillar's actions last year, it's no secret that the U.S. manufacturing scene has changed mightily since 30,000 people were employed at central Illinois Caterpillar plants in the early 1970s. That was a time when most of Caterpillar's machines were assembled in Illinois — in plants at Joliet, Aurora and Decatur as well as across the Peoria area.

Now Caterpillar has more factories overseas — 76 — than it does in the United States where 62 plants operate. Caterpillar maintains 25 plants in China alone. When it comes to opening plants in this country, Caterpillar follows the trend of big manufacturers that set up shop in the Sun Belt.

U.S. plants opened by Caterpillar in recent years have been in Georgia and Texas while the company recently moved its mining division from Milwaukee to Tucson, Ariz.

Caterpillar Inc., the name the company adopted in 1986, has expanded beyond bulldozers. Along with making a major commitment to mining, Caterpillar is now heavily involved with equipment used for oil and gas exploration, electric power generation and marine engines.

But it wasn't always that way.

By the time the Caterpillar name was a registered trademark in 1910, the Holt Caterpillar Co. had established a plant in East Peoria in a building that previously housed the Colean Manufacturing Co., a firm that made steam-powered tractors before the company went bankrupt.

After the 1925 merger, C.L. Best became Caterpillar's first CEO, a position he held until his death in 1951. “Clarence Leo Best — no one called him Clarence. His friends called him Leo. At work, he was C.L.,” said Lee Fosburgh, Caterpillar's archives director.

Fosburgh pointed out that it was Best who got Caterpillar off on the right foot.

“The Best Tracklayer Sixty became the Caterpillar Sixty,” said Fosburgh, referring to the workhorse tractor that helped establish Caterpillar in the earthmoving marketplace. “Best helped lead the push towards the company's adoption of the diesel engine. He came up with concepts and ideas right up until his death — at age 71,” said Fosburgh.

Former CEO and Chairman Doug Oberhelman, in remarks made at the 2016 opening of the an exhibit on Best at the Caterpillar Visitors Center in Peoria, said Best’s business acumen was one of the big reasons for the company’s success. Oberhelman noted that Best went to Wall Street for Caterpillar’s initial public stock offering on Dec. 2, 1929 — just weeks after the devastating stock market crash that precipitated the Great Depression.

After presiding over the company's greatest sales year ever in 2012 when Caterpillar topped $65 billion in sales (an occasion celebrated in Fortune magazine with the headline, “Caterpillar crushes it”), Oberhelman went all-in on mining. In 2010, Caterpillar made the largest acquisition in its history, buying Bucyrus International, a Milwaukee-based maker of large mining equipment, for $8.8 billion. No sooner was the deal completed when mining around the globe went into a tailspin.

As a result, Oberhelman presided over something else: the closing and consolidation of 20 plants worldwide and a dramatic reduction in the company’s workforce. Between 2012 and 2015, Caterpillar laid off 31,000 people.

As a company that sold 34 pipe-laying machines to China in 1975, Caterpillar had a strategy for China in 2010: “We're going to play offense and we’re going to win,” said Oberhelman at the time. By 2014, Caterpillar had 25 plants in China. But the Chinese market, once so hot, went cool.

But like the heavy-duty equipment it produces, Caterpillar has shown an ability to weather storms, whether inflicted by markets or strong winds. Caterpillar was already bouncing back from the malaise in the mining industry in 2017 while in April of this year, Caterpillar posted the highest first-quarter profit in the company’s 93-year history with a 31 percent increase in company revenues.

There were many great days in Caterpillar-Peoria history. During World War II, 191 Peorians, including 158 Caterpillar employees, shipped out as a group to the jungles of Burma, forming Caterpillar's own 497th Engineer Heavy Shop Co.

The company's task? To circumvent a portion of the Burma Road that had been captured by the Japanese. This was vital to restore lines of communication between China and Burma, and help liberate Burma from Japanese forces.

In a magazine ad that Caterpillar ran during the war, the 497th was depicted with their sign proudly displayed on a palm tree by the group's tent city: “Little Peoria.”

That ad was among other print advertisements that Caterpillar ran in major magazines at the time in the 1940s and 1950s from the collection of Caterpillar retiree Mark Johnson at a 2014 display at the Peoria Public Library.

Building a road in jungle conditions — with tigers, snakes and malaria to worry about — was not easy, said Johnson, who retired in 2009 after 37 years at Caterpillar.

Ads from the 1950s in Johnson’s collection illustrate the emphasis that Caterpillar placed on rebuilding the nation’s infrastructure after the war. “When you think of better roads, think of the big yellow machines that make them possible,” Caterpillar noted in a 1950s ad.

Caterpillar equipment didn’t just build American highways but were in use around the world. As the global economy got bigger, Caterpillar grew with it. New markets provided Caterpillar with opportunity.

Not only did Caterpillar start building factories overseas, it opened new plants across the United States — usually in right-to-work states like Texas or Georgia. While a hub for Caterpillar operations, central Illinois became a battleground between Cat labor and management in the 1990s marked by two lengthy strikes.

The United Auto Workers, which waged such a spirited campaign against Caterpillar in the 1990s has seen its influence — and numbers — decline in recent years. There were 9,500 UAW members who voted on a six-year contract at 11 Caterpillar facilities in Illinois and Pennsylvania in 2011. By the time of the next contract, approved in April 2017, only 5,000 UAW members voted.

Today things are changing in Downtown Peoria. Property that had been set aside for Caterpillar’s new headquarters, is slated to be home to OSF HealthCare. OSF plans to place between 700 and 750 employees at the site at a cost between $80 million and $100 million.

Journal Star reporter Steve Tarter can be reached at starter@pjstar.com.

Editor’s note: The weekly Illinois Bicentennial series is brought to you by the Illinois Associated Press Media Editors and Illinois Press Association. More than 20 newspapers are creating stories about the state’s history, places and key moments in advance of the Bicentennial on Dec. 3, 2018. Stories published up to this date can be found at 200illinois.com.