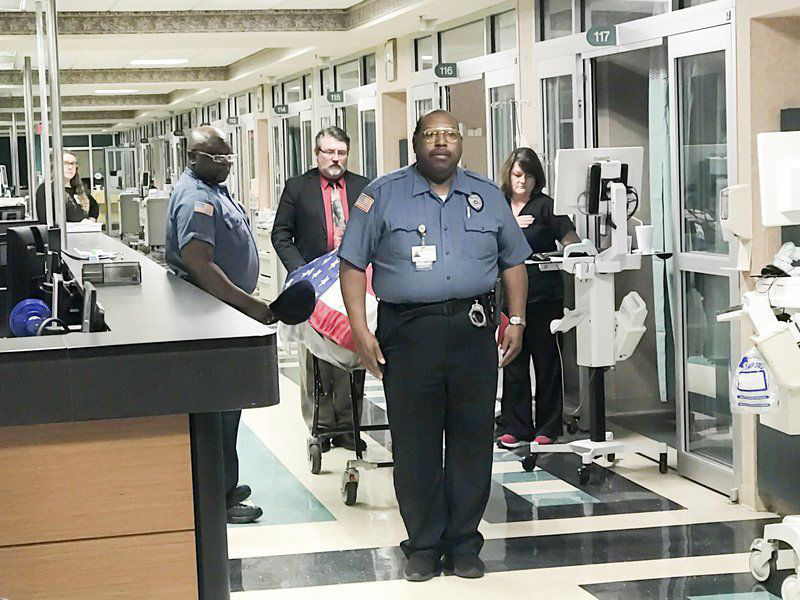 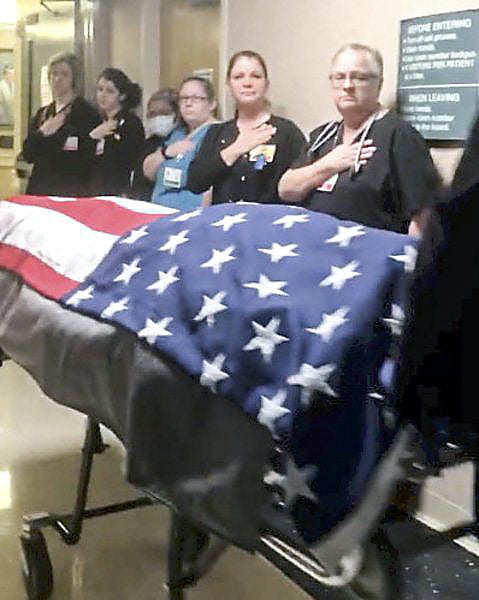 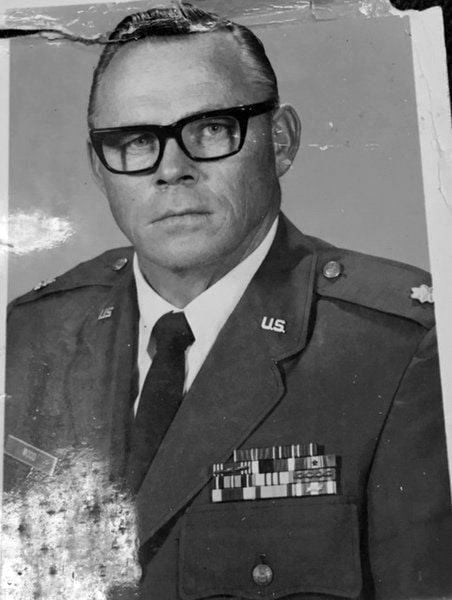 Maj. James Wood Sr., before being promoted to a lieutenant colonel in the U.S. Air Force in 1972.

Maj. James Wood Sr., before being promoted to a lieutenant colonel in the U.S. Air Force in 1972.

It’s a Sunday afternoon in late August and the gym at the base of the parking garage at Anderson Regional Medical Center in Meridian is mostly empty.

A woman is walking on a treadmill beneath muted televisions.

A few people are shooting hoops.

The treadmill slows to a halt and the basketball court falls silent as Taps plays over a loudspeaker.

Somewhere above, on a floor of the hospital’s north campus, staff members line the hallway to show respect to a patient who has died after serving their country.

Their hands cover their hearts as the security team escorts a flag-draped gurney to the exit, in preparation for transport to the funeral home.

The somber ceremony known as “Call to Honor,” began in 2016 and sometimes takes place several times a month, according to Brian Fortenberry, the director of security services at the hospital.

“I think it’s just one way to give a final respect to people that have served our country,” he said.

When a patient who has served in the military, law enforcement or as a first responder dies, the hospital makes an announcement, telling staff the floor where they may gather if they are available, Fortenberry said.

Once the transport begins, Taps plays over the switchboard throughout the north or south campus, depending on the patient’s location.

“I don’t think I’ve ever been to a Call to Honor where I’m not moved to tears,” said Sheila Nettles, director of service excellence. “It’s very powerful, and in this day and age, we need that.”

The hospital uses American flags that are safe for a clinical setting and stores them in wooden boxes.

Former patient, Buddy Spence, a retired service member, was moved to make the boxes by hand after hearing Taps play from his hospital bed, Nettles said.

U.S. Army veteran James Wood Jr. of Destin, Florida had never heard of the ceremony until his father’s death at Anderson.

James Wood Sr., 89, a veteran of the U.S. Air Force, loved to play golf whenever he could and never missed a Little League game when Wood Jr. was growing up.

The retired lieutenant colonel of Louisville was awarded the Bronze Star for his service in Vietnam, his son said.

Breathing problems brought him to the hospital in Meridian in February 2018 and he died after a few days there, Wood said.

His father’s Call to Honor was one of the most significant events of his life.

He knows his father would think it was the perfect way to go out.

“To have total strangers stop what they’re doing, leave their work spaces, come down there for somebody they didn’t know, that was a great honor for my dad,” he said. “I can’t express my thanks enough to the hospital for what, in the end, is a very simple ceremony.”

Decorated U.S. Marine Corps veteran and retired Meridian police detective Larry Covert was with his wife, Beth, in Anderson’s emergency room when they first heard Taps play for another patient who had died.

“I said, ‘Larry, would you want that? If something happens to you, do you want that?’ and he said, ‘No, I don’t want it,’ because he was like that,” Beth Covert recalled with a laugh.

“When he’d say that, you’d know he would, though,” she said. “He would have been proud.”

Beth had known Larry since they were kids and finally agreed to marry him after he came home from Vietnam.

He was a prankster with a big heart and a nickname for everybody — the type of guy who would buy gallons of gas for drivers in need after Hurricane Katrina.

Larry died at Anderson in March at 68.

Beth, her son Lance, and Larry’s sister, Jan Nowlan, lined the hall, knowing what would come next.

“They were everywhere, nurses,” Beth said. “It’s a nice thing to show that they do care.”

Nowlan recorded the moment, less than a minute long, on her phone.

“I could feel the tears while I’m looking through the camera,” she said. “I looked up and all the nurses were crying, too, as if they were just feeling it as much as we were.”

“We try to attend, if possible, every one,” said Ronna Nichols, the hospital’s director of accreditation.

When it was time to say goodbye to her brother-in-law, Jimmy Reynolds, she knew she wanted to capture the Call to Honor for her family.

Reynolds was an officer for the Jones County Drug Court, with a reputation for giving tough love as he helped people turn their lives around, his wife Susan said.

Reynolds, a 62-year-old doting grandfather, died from leukemia in July.

Susan, who works as Anderson’s director of coding, watched as her colleagues honored her husband of 42 years.

“I just think it’s wonderful,” she said. “I’m proud of Anderson for doing it.”