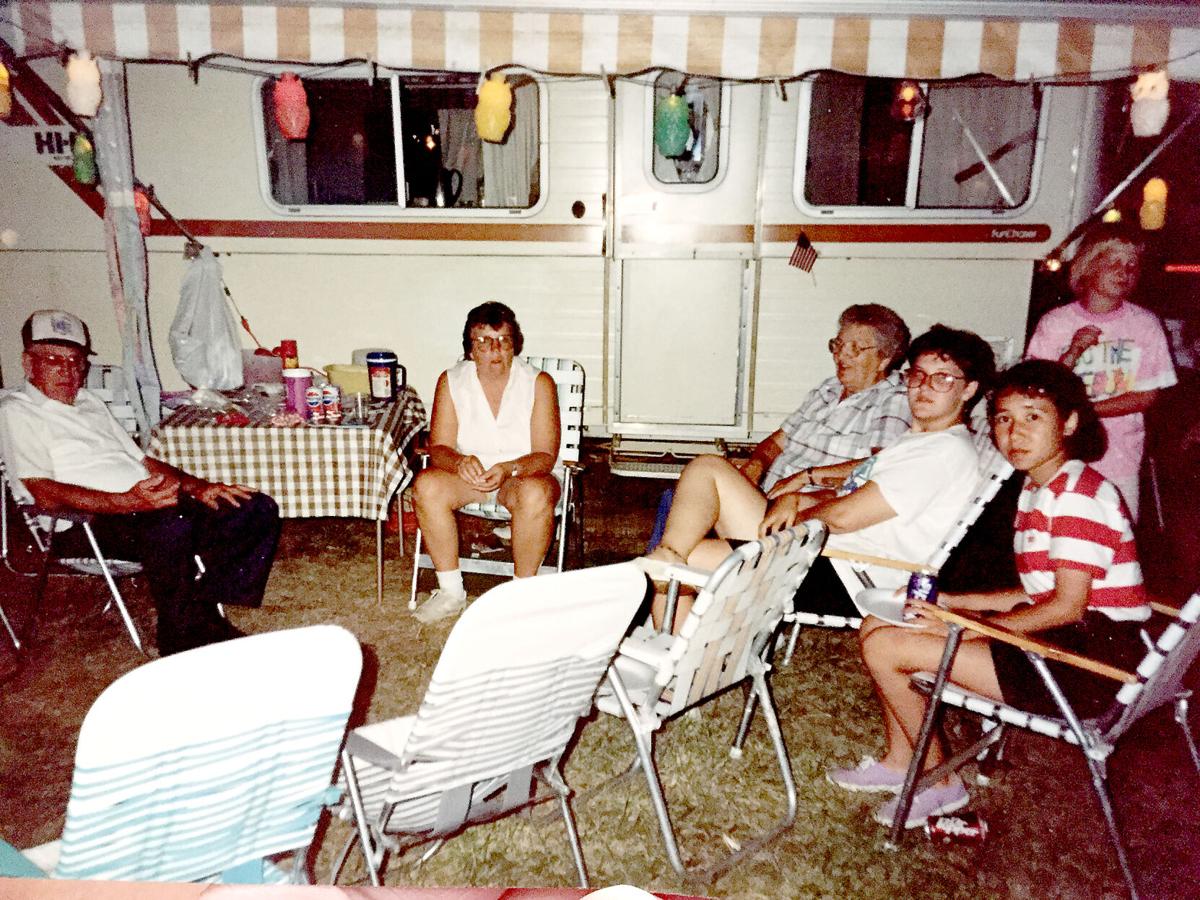 Members of the Birch and Phillips family at the Effingham County Fair in 1991. 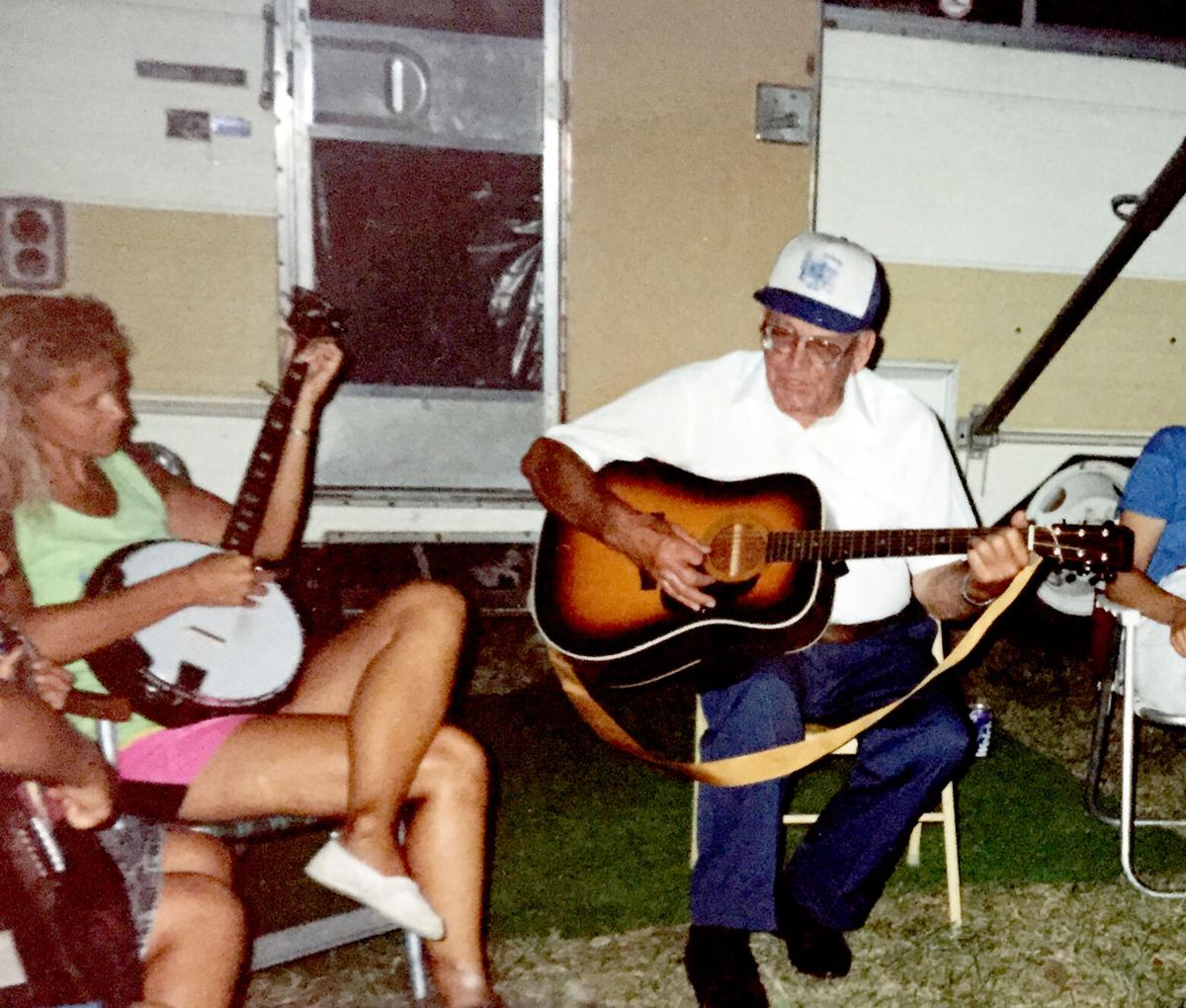 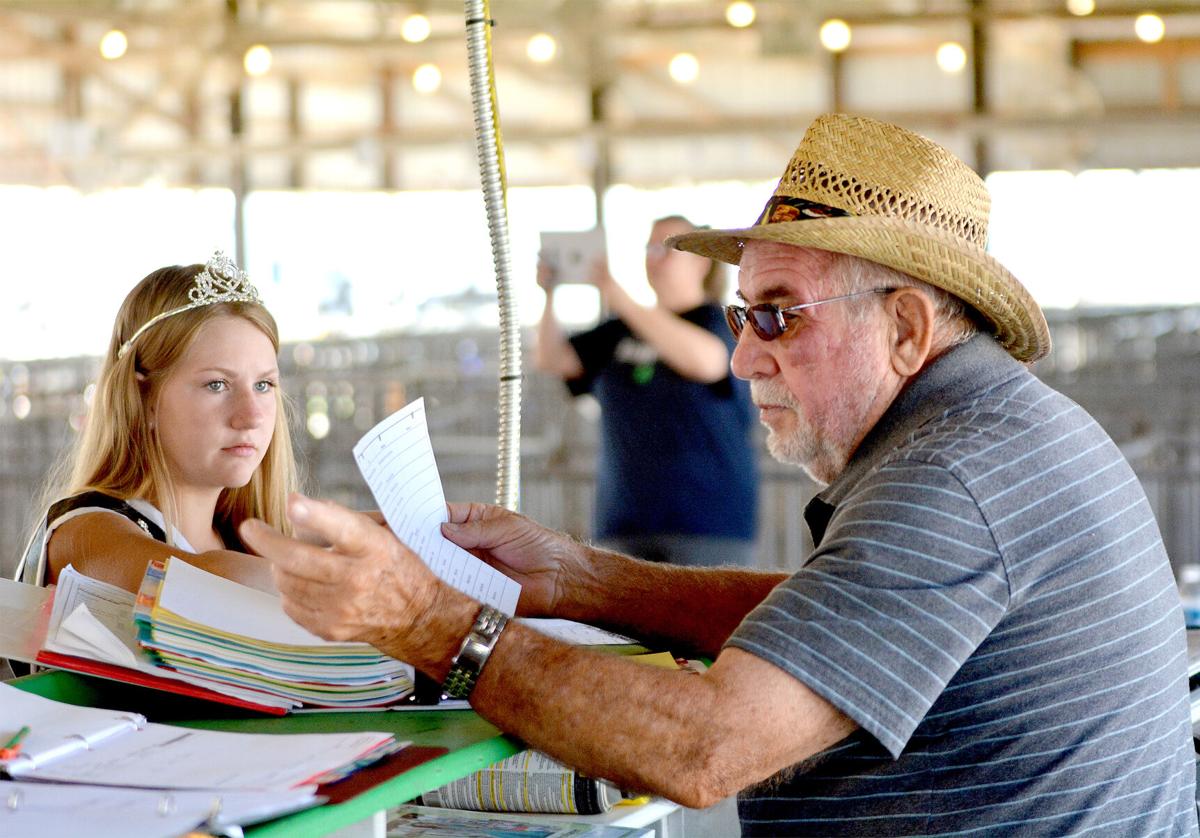 Approximately 100 to 120 camper sites are available for rent at the Effingham County Fairgrounds. 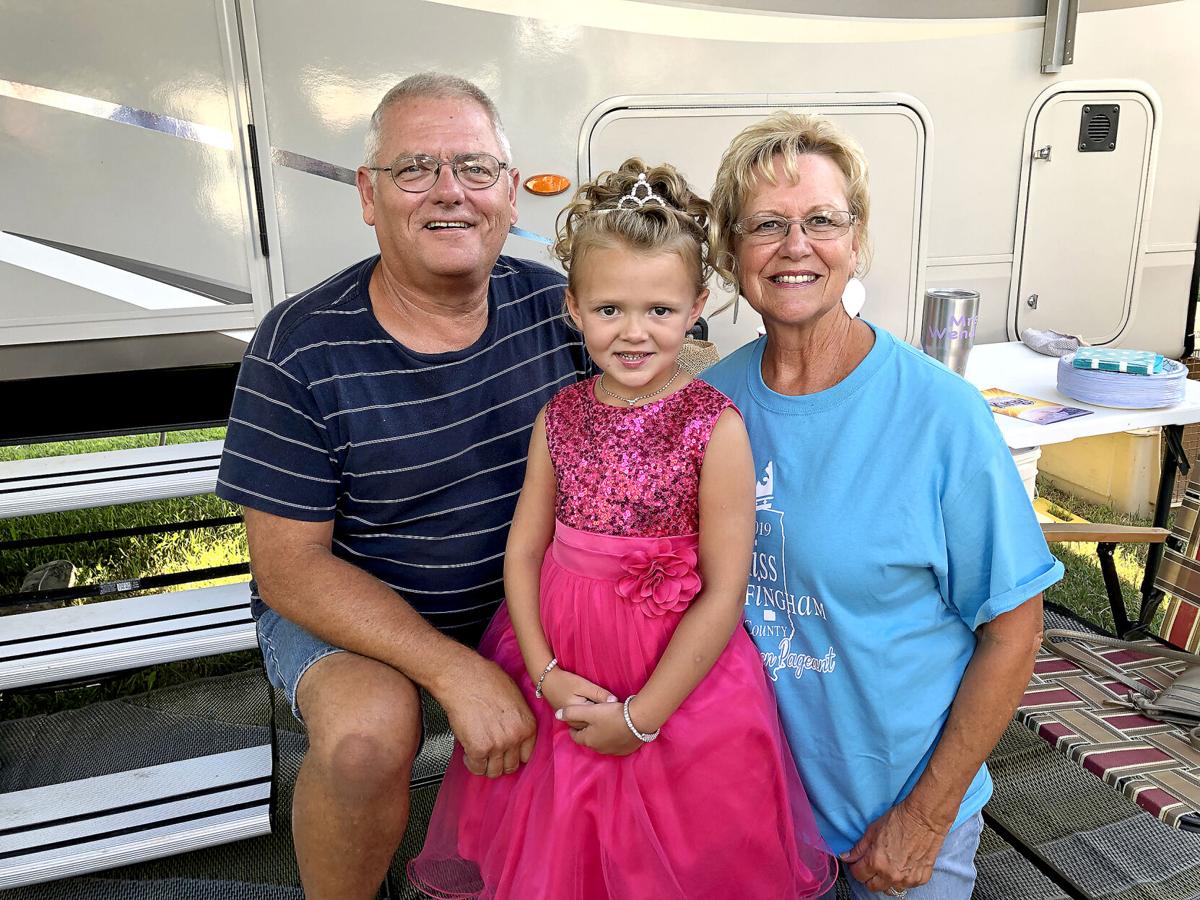 Allen Birch and Tammy Birch pictured with their granddaughter, Lydia Wendling, last year before the Little Miss Pageant. Lydia got ready for the pageant in the Birch's camper located on the fairgrounds. 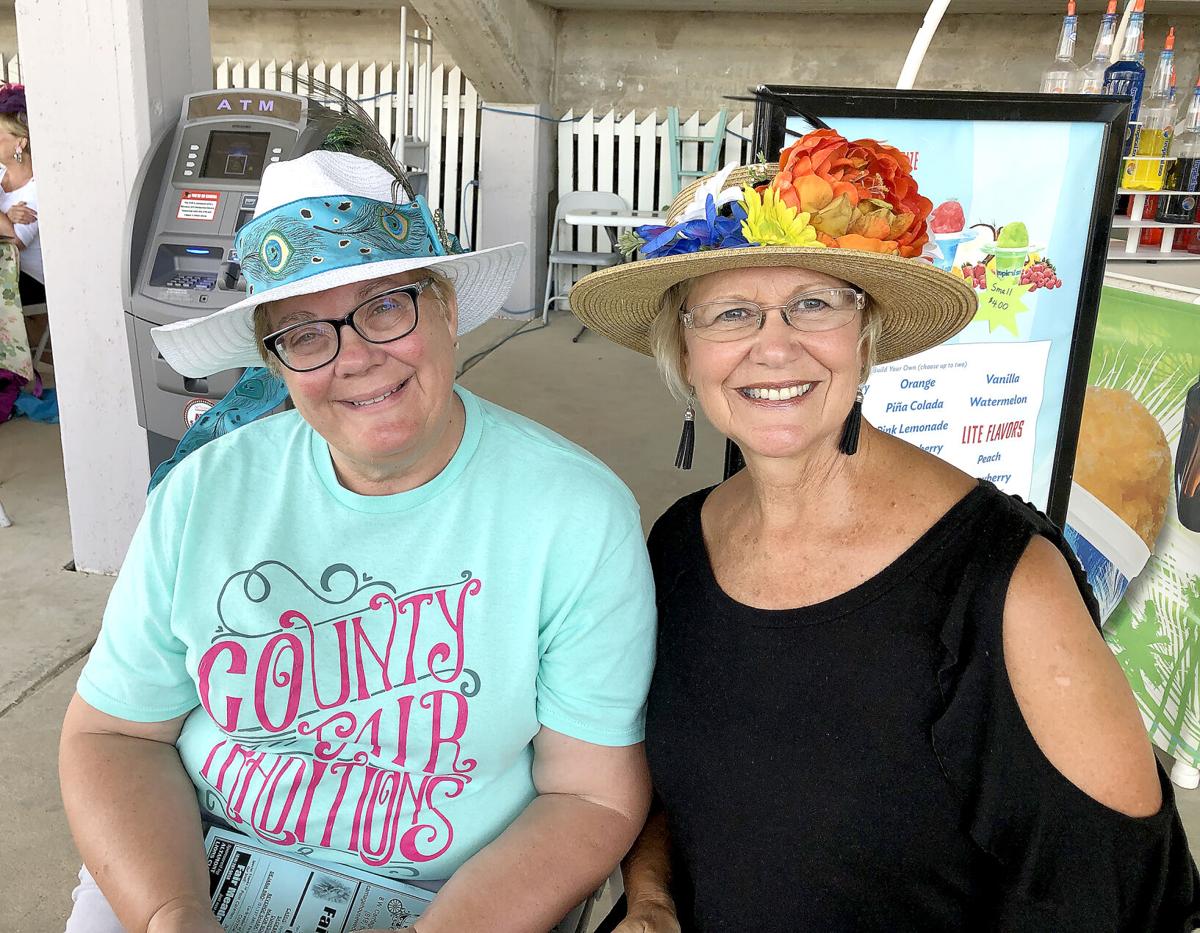 Joann Ring, left, and Tammy Birch, have been camping buddies for several years. The photo was taken on Derby Day at the Effingham County Fair. 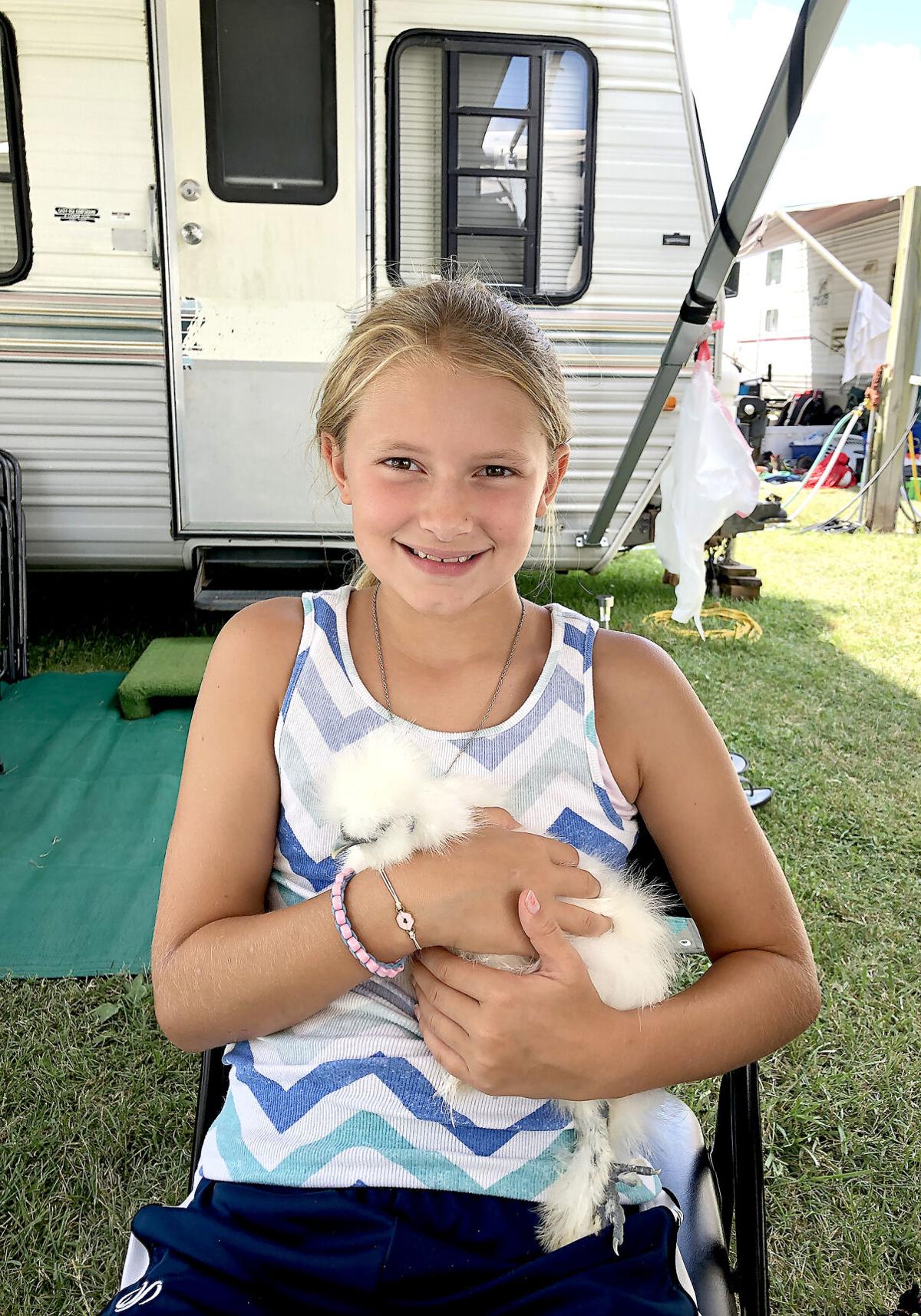 Melia Wendling with her 4-H project Silkie chicken in front of a camper owned by her grandparents, Allen and Tammy Birch.

Members of the Birch and Phillips family at the Effingham County Fair in 1991.

Approximately 100 to 120 camper sites are available for rent at the Effingham County Fairgrounds.

Allen Birch and Tammy Birch pictured with their granddaughter, Lydia Wendling, last year before the Little Miss Pageant. Lydia got ready for the pageant in the Birch's camper located on the fairgrounds.

Joann Ring, left, and Tammy Birch, have been camping buddies for several years. The photo was taken on Derby Day at the Effingham County Fair.

Melia Wendling with her 4-H project Silkie chicken in front of a camper owned by her grandparents, Allen and Tammy Birch.

Campers are welcome to spend a few days at the Effingham County Fairgrounds even though there's not going to be a traditional fair this year.

“There are a total of approximately 100 to 120 campsites available on the fairgrounds,” Effingham County Fair Association Vice President Dale Laue said. “It depends upon how they are parked.”

Effingham County Fair Association President Phil Hartke said most of the campsites are wired for 35-amp service. However, he notes there are a couple of sites closer to the track with 50-amp service.

He said the hook-ups at the track are traditionally used by participants in the ranch-sorting competition, vendors and by board members who like to camp during fair week.

Hartke said even though most events at the fair are canceled the campground this year will be open through the first weekend of September.

Laue said normally they don't open the fairgrounds up for camping other than during the fair and special events. He said this year they are making an exception.

“Most of the campers are involved with 4-H during the week of the fair,” Hartke said. “They are also fair board members who like to stay out there all week.”

Hartke said there are three main areas for camping, including one close to the 4-H area and open show arena that rent for $30 per night and reserved race track area at $35 per night.

He said each camper hook-up has power and water. However, there are no sewer hook-ups. There is a dump station on the fairgrounds for campers to use when they leave.

“There is not much out there as far as entertainment,” Hartke said about the fairground camping this year.

Laue has been camping out at the fairgrounds regularly during fair week over the past 10 years. Prior to that, he camped when participating in 4-H activities off and on for 40 years.

Serving as superintendent of the junior and livestock shows, along with being in charge of many activities at the fair, requires Laue to be at the fair around the clock. He said camping at the fairgrounds allows him to get up early to meet with the livestock judges before the show begins.

“We usually camp out there each year,” Laue said. “One of the strong suits of our fair is the family tradition of going to the fair and camping the week.”

“Some people scheduled their year's vacation in advance to be able to stay out there fair week,” Laue said. “There are multiple people who have been doing it for lots and lots of years.”

Laue said even grandparents stay on the grounds even though their grandchildren are no longer part of 4-H.

“It's quite a family tradition,” Laue said. “Particularly in the 4-H camping area.”

“We have what we call our 'fair friends' that we see once a year during the fair,” Laue said.

The fair also provides an opportunity to catch up with residents around the county.

“It's nice to be able to visit with them all in one location,” he added. “It's what makes our fair so strong.”

“It's a family affair,” Laue said.

Cleo McManaway is another regular fair camper and has camped on the fairgrounds for over 34 years. He said when he first started camping during the fair there weren't too many campers.

“It just grew and grew and grew,” McManaway said. “I think there are more families involved now than there were back then.”

“Back in the day when I was in 4-H, the kids stayed and the families went home,” McManaway said about camping at the fairgrounds.

McManaway said he would always spend his vacation with his family at the fairgrounds and has a special reason for camping every year – he has been announcing at the 4-H livestock shows for over 30 years. He said he will miss his yearly responsibilities at the fairgrounds this summer.

“I really enjoy doing announcements at the shows,” McManaway said. “My main job is to get the classes in and out of the show ring and keep them moving as smoothly as possible.”

“This is the only thing that I know of that we do as a family. That's mom, dad and the kids and everybody goes. We spend a week together,” McManaway said. “And when they leave, everybody is talking about coming back next year.”

He said this year he is going to skip camping at the fair.

“We're definitely getting screwed out of a vacation this year,” McManaway said. “It's really a family affair.”

Tammy Birch and her family have been camping at the fairgrounds for a least 37 years. Her nieces and nephews were in 4-H when they started camping.

“We would help them with their 4-H projects,” Birch said. “Along with my parents camping with us, we had generations camping us.”

“Everyone would gather around the area where we were and would sit and listen to music,” Birch said. “Those were the good old days.”

She said when they started camping at the campground there were no charges.

“It was free at first and there wasn't nearly as many camping as there is now,” Birch said.

Birch said camping has always been a family adventure starting with her nieces and nephews, her children and now her grandchildren are showing for 4-H events. In addition to her family of campers, her sisters and brother have campers set up at the fairgrounds and now her daughter camps on the grounds as well.

“In our little group, we have four campers that are all family,” Birch said. “It's our little family campground the week of the fair.”

Birch said she is really going to miss camping this year.

“The kids love it,” Birch said. “You live there for a week and by the end of the week you are definitely ready to come home.”

“We are season ticket holders at the fair.” Birch said. “It's really going to be different not having the fair this year.”

To camp at the fairgrounds through the first week of September, fill out a registration form at the Effingham County Fair Facebook page or call 1-888-854-FAIR.