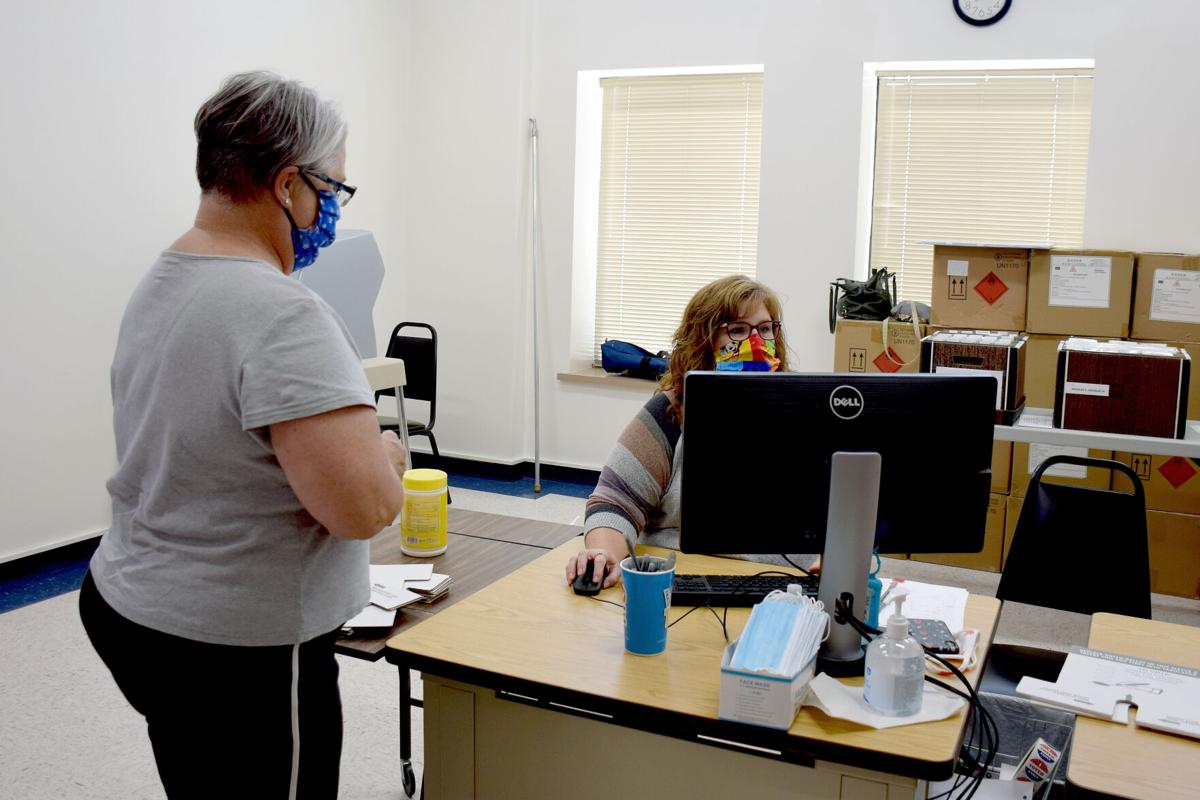 Melissa Ferris, right, checks voter registrations and passes out ballots on Thursday as Karen Luchtefeld gets ready to vote. 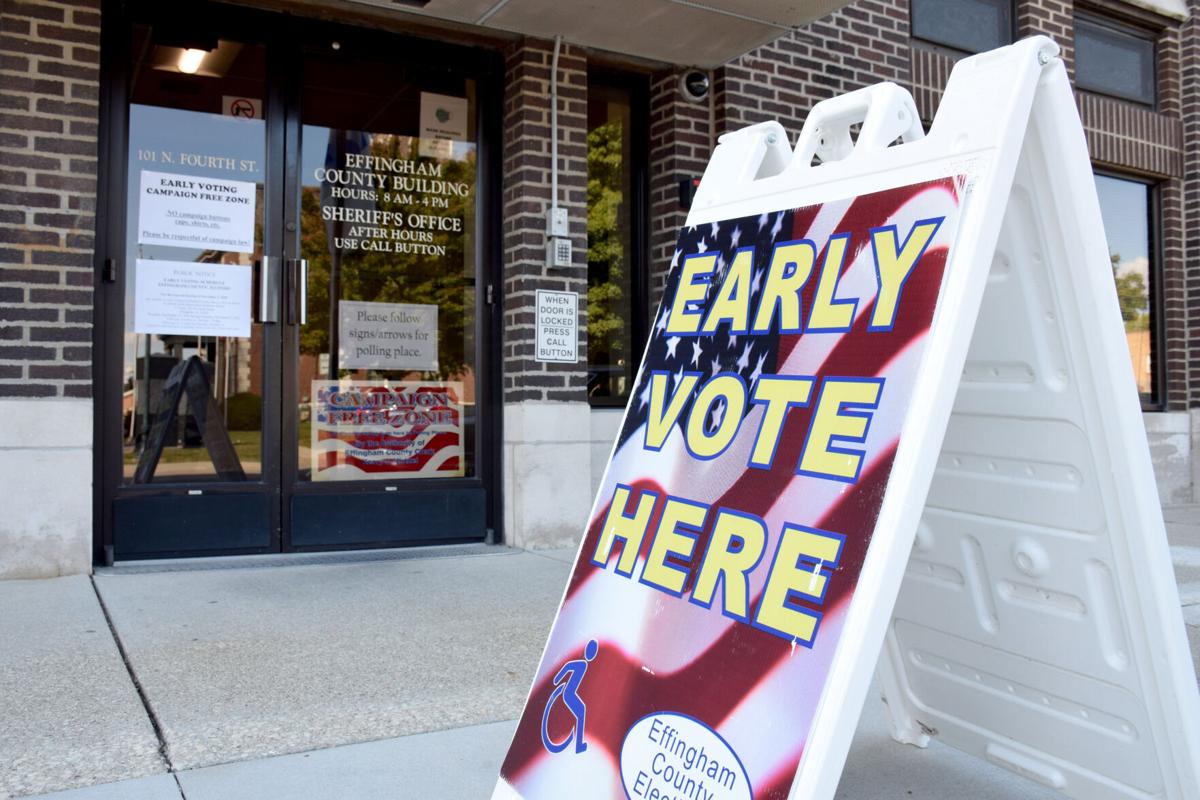 The sign outside the Effingham County building shows voters where to vote. 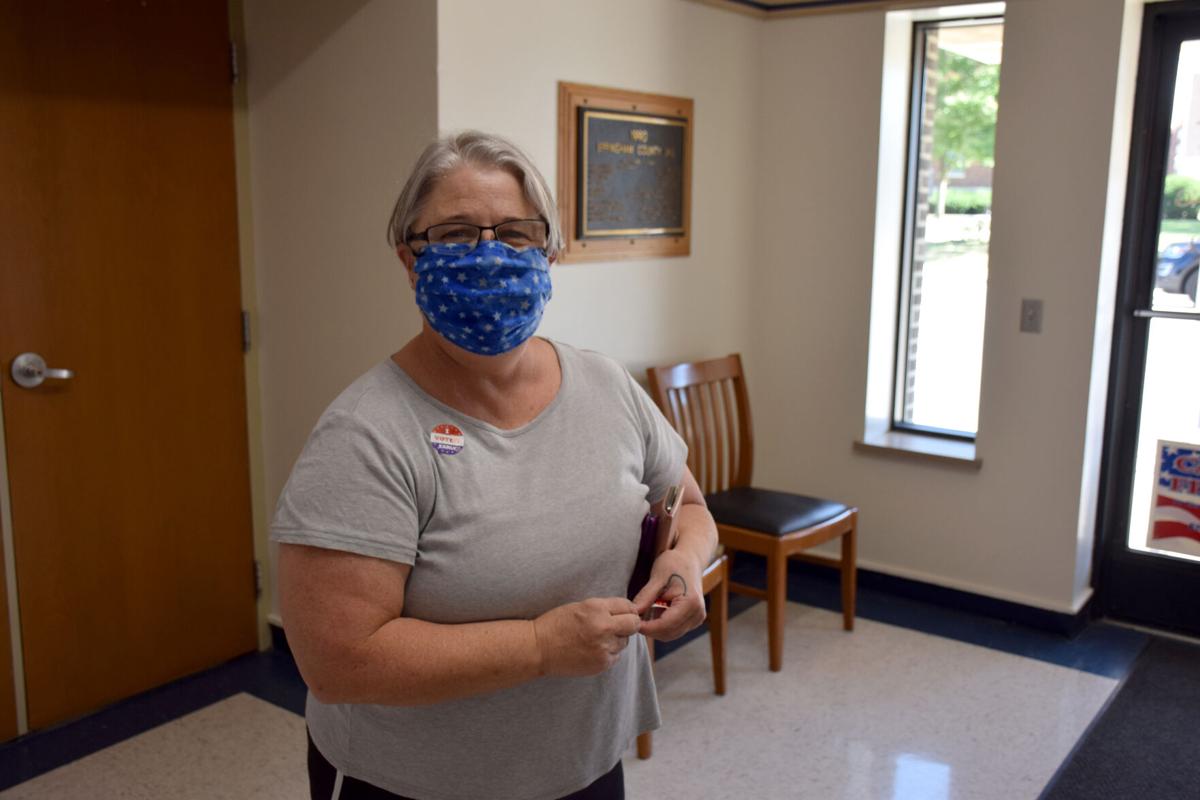 "Vote!" Karen Luchtefeld said, as she showed off her "I voted" sticker.

Melissa Ferris, right, checks voter registrations and passes out ballots on Thursday as Karen Luchtefeld gets ready to vote.

The sign outside the Effingham County building shows voters where to vote.

"Vote!" Karen Luchtefeld said, as she showed off her "I voted" sticker.

Early voting began Thursday in Effingham County and across the state, and voters lined up to cast their ballots in what is sure to be a contentious election on the local, state and national stages.

Old and young, Democrat and Republican, people appeared throughout the day at the Effingham County Clerk’s office in downtown Effingham.

Melissa Ferris and Pauletta Bushur, who were supervising the polls on behalf of the clerk’s office, passed out ballots and checked if voters were registered throughout the day. Ferris said they had more voters on Thursday morning “than you did on some days” in past elections.

There were 181 voters who cast their ballots on Thursday.

When asked if it was more than the office expected, Bushur said “for a first day, I think so.”

The voting began as Effingham County Chamber of Commerce finalized plans for a candidates forum on Tuesday, Sept. 29, at the Effingham Elks Lodge. Eric Zeller will moderate. It begins at 5:30 p.m.

The Effingham Daily News has posted profiles of the candidates and their answers to questions about issues facing Illinois at:

That EDN site also includes profiles of the candidates in the only contested Effingham County Board race, District F: Republican Elizabeth Huston and Democrat Anthony Robertson.

Karen Luchtefeld, a former county board member, was there to vote on Thursday.

“I didn’t think there’d be a line,” she said, noting she had “a little bit” of concern about the pandemic as it relates to voting. Luchtefeld encouraged everyone who can to vote.

“I had to pay my taxes and it was convenient,” said Kyle Moomaw after casting his ballot.

“I’m tickled that I can vote early,” said Dan Hays, another resident. He said that he wanted to make sure his vote was counted, but voting early was more of a matter of convenience.

In many ways, voting methods have been a discussion on the national stage this election cycle. Between the risks of in-person voting due to the COVID-19 pandemic and the recent controversies surrounding the U.S. Post Office, there is some concern attached to nearly every voting method.

County Clerk and Recorder Kerry Hirtzel sent out 16,000 vote-by-mail applications this summer in compliance with a new state law. The law requires counties to send out vote-by-mail applications to anyone who voted in any of the three most recent elections. This is to encourage the method and lower the number of people risking exposure to COVID-19.

The law, which Gov. J.B. Pritzker signed on June 16, also makes Nov. 3 a state holiday, meaning that all government offices except election offices, K-12 schools, and some colleges will be closed.

The county has received “over 2,200” mail-in voting applications, according to Bushur. They began sending out ballots today, though because of the high volume, not all ballots have been mailed yet.

Statewide, vote-by-mail ballots started going out Thursday to a record 1.82 million applicants thus far, according to the Illinois State Board of Elections.

“It’s off-the-chart up this year,” Matt Dietrich, spokesman for the Illinois State Board of Elections, told The Associated Press. He said early voting applications in 2018 numbered 500,000, of which 86% were returned.

Early voting for all precincts in Effingham County is taking place at the county clerk’s office at 101 N 4th St. The hours for early voting are 8 a.m. to 4 p.m. Monday through Friday until Monday, Nov. 2, and 8 a.m. to noon on Saturday, Oct. 31.