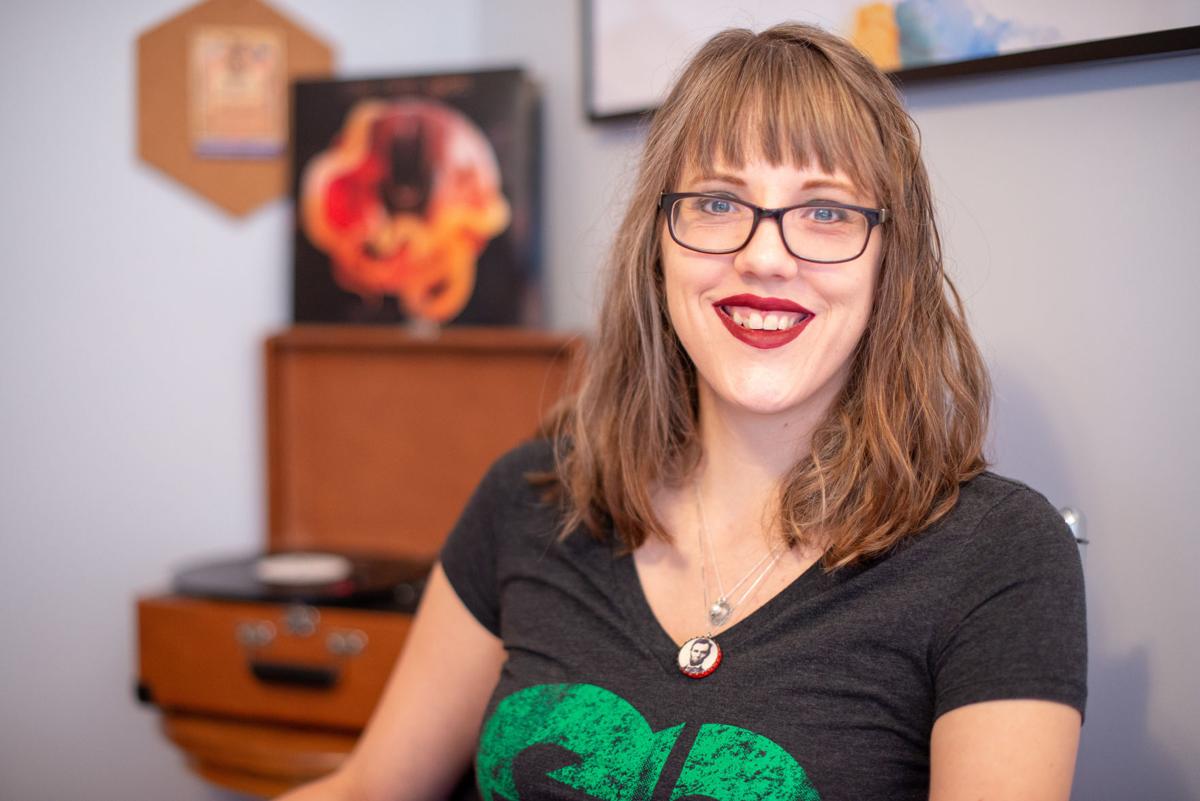 The Rev. Willie Love speaks to demonstrators during a peaceful rally held by the Effingham Social Justice Group in June. 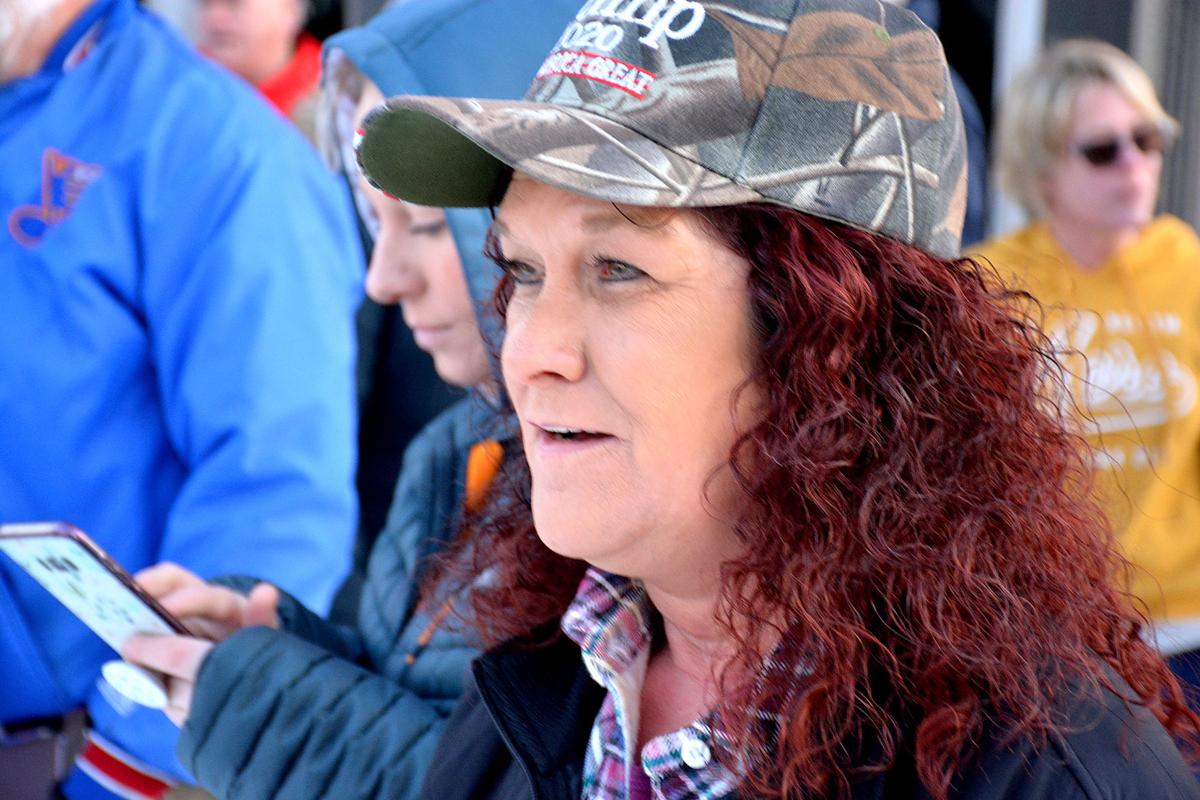 Julie Poe of Effingham shows her support for the president by taking part in a demonstration in downtown Effingham in December 2019.

If there are undecided voters left in Effingham County as we lumber toward Election Day, you’d be hard-pressed to find them.

To be sure, it was also that way in 2016. Although Hillary Clinton captured 55.8 percent of the statewide tally to the 38.8 percent collected by Donald Trump, the businessman picked up 78.2 percent of the vote in Effingham County on his way to the White House.

As the Effingham Daily News noted at the start of its periodic “Pulse of the Voters” series in 2018, Effingham County and much of the rest of central Illinois represent an island of red in a sea of blue; a landscape where people stand firm in their beliefs — politically, ethically, philosophically, and in the way they approach faith, family and work.

As the series comes to a close, three of those voters chatted with the EDN about how the nation has fared under Trump, sharing their thoughts about who is best suited to lead.

Julie M. Poe, 50, works part time at a liquor store in Funkhouser. A Republican, she voted for Trump in 2016 and has already voted for him again this year.

“I am pro-life,” she said. “And he is as well. I like what he’s done for the country. He produced jobs. He lowered the price of medication. He’s building the wall. He supports law enforcement — he’s trying to protect our country.”

“They’re obviously liars,” she said of Biden and his running mate, Kamala Harris. “I can’t vote for a liar. I don’t think it’s fair for them to say what you want to hear and then they get in office and it’s, ‘Oh, never mind. I’m going to go back to my original.’

“Why are you lying about this? Why don’t you just be honest and tell the American people what you’re going to do?”

On the eve of the impeachment vote in December, supporters and opponents of Trump gathered in downtown Effingham.

Poe was among the Trump supporters who stood on the south corner of Fourth and Jefferson streets while a group favoring impeachment walked around the Effingham County Museum.

Chants of “four more years” and “drain the swamp” from the Trump supporters competed with “lock him up” and “no more years” from the opposing group.

Poe was there to cheer on the president.

“I just absolutely love the fact he has the backbone to stand up to the third world countries,” she said then. “He’s just amazing. And I just want to keep him in office. If it was possible, we would keep him in office forever.”

She feels the same today.

“They had nothing on President Trump, but they tried every which way they could to get him out of office, to destroy his life,” Poe said.

Since the impeachment and Trump’s acquittal in the Senate, the nation has faced social unrest and a pandemic that has claimed nearly a quarter million American lives. Poe thinks Trump has shown true leadership through it all.

“It’s very important to me that he stands for law enforcement,” she said. “Because I do, too.”

Can he sometimes be brash?

“I like the way he comes across,” Poe said. “Me and my friends have often said, ‘You know, he’s talking to us like we’re sitting in a bar having a conversation.’ I like the fact that he’s down to earth. Yeah, he is a little arrogant, but that’s just who he is.”

She thinks the criticism Trump faces is unfair.

“It doesn’t matter if he paints the sky in rainbow colors and dips it in diamonds and rubies,” she said. “They are going to find fault in it. It’s aggravating.

“I’m not saying President Trump is perfect. He’s not perfect by any means. I don’t agree with everything he says and everything he does. But I support him because overall he has kept his promises.”

Poe is saddened by how divided the nation has become.

“I wish that it wasn’t like that,” she said. “There’s been a lot of arguing and bickering between family members, and I’m guilty of that. And I shouldn’t do that because everyone has the right to vote for who they want to vote for.

Sarah Ruholl Sehy, 33, is a lawyer who lives in Teutopolis. She describes herself as a hardcore Democrat.

“The very first presidential election I was old enough to vote in was Obama’s initial election in 2008,” she said. “I was in college and that felt historic and important in a really wonderful way.”

And yet, Ruholl Sehy called this year even more important.

“I think the backlash from Obama’s election has been extremely severe,” she said. “I think pushing back on that backlash is more important, even, than the historic grandness of 2008. Good lord, if there ends up being a more important election than this one — I don’t want to know.”

“I’d like to see people not die from a pandemic we could have had a much better response to,” she said. “I’d like to see migrant children not get lost in the system, separated from their parents, families literally torn apart. I’d like to see somebody who thinks Black people don’t necessarily have to get shot by police.”

The direction of the Supreme Court and affordable health care are also important issues for her, making the Nov. 3 election loom large.

The past four years have been difficult for Ruholl Sehy to bear.

“Like an awful nonstop horror show,” she said. “It’s been really sad to watch, honestly. I’ve just seen a lot of inhumanity at the level of the federal government.”

“Certainly, the Black Lives Matter movement and the way it’s being perceived is important,” she said. “I don’t think we have anyone in power now who sees that this is a problem that exists and needs to be addressed.”

She has not been impressed by Trump’s response to the pandemic.

“As a performer, he’s done an outstanding job,” she said. “As a leader, he gets zero out of 10. I don’t know why we have a quarter of a million people dead. I feel like, once again, all the expert scientists, the Centers for Disease Control, the bureaucrats who were forced out, who have knowledge and were prepared for this — they just got rid of anybody with any kind of integrity. And we’re feeling the effects of it.”

Does she trust Biden to handle it differently?

“There would have been consistent messaging,” she said. “People in leadership would consistently advise that you follow the best advice.”

Like Poe, the divisiveness across the country — and locally — bothers Ruholl Sehy.

“I don’t generally unfriend people on Facebook who disagree with me — unless they say hateful things,” she said. “The most recent hateful thing that made me unfriend somebody was a meme about ‘If you don’t resist, you won’t get shot.’ And that just disregards the experience of Black Americans. I can’t understand how someone can think that’s an appropriate thing to say.”

The Rev. Willie Love, 56, pastor of Brook of Life Church in Effingham, is an independent voter. He was pleased to see Trump win in 2016, because he did not trust Hillary Clinton.

“Biden, without a doubt,” he said.

That’s because he doesn’t think Trump has shown the leadership this country needs in this time of coronavirus and social unrest.

“We’ve been very exposed,” Love said. “A lot of our core has been exposed. America has been divided for years. It’s just now being truly exposed. We’ve had presidents in the past that masked it well. Well, Trump isn’t masking it. He’s very open.

“The problem is not in what we’ve been. It’s our refusal to deal with it. All of us have made mistakes and all of us have had ugly. And that’s the problem, because we’re humans. The decision to not deal with it is our problem.”

Love spoke in June during the social Justice rally held in Effingham. The crowd of about 500 peaceful demonstrators impressed him.

He’d like to see that energy from both sides of the political divide channeled into something productive.

“If humanity was the issue, it wouldn’t matter whether you were Democrat or Republican.”

Although he wished Trump success after his 2016 victory, Love has seen no evidence that the current president wants to heal a divided nation.

He sees the qualities of a leader in Biden.

Can that divide be bridged?

“If Trump gets back in there, we’re going to get a lot of what we’ve been getting and that’s going to make us more vulnerable. But even if he does get back in there, the core of the people in this country are going to keep it together.

“It’s not as much about democracy as it is about our morality.”