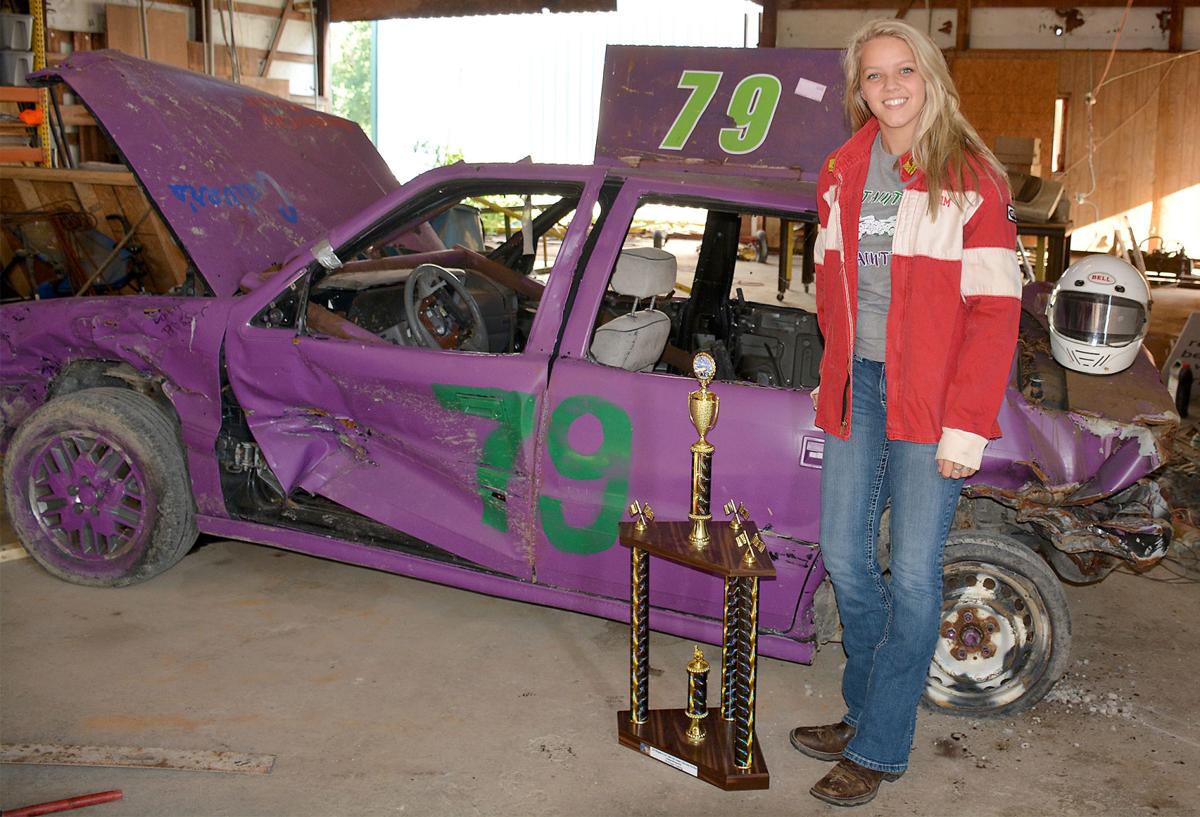 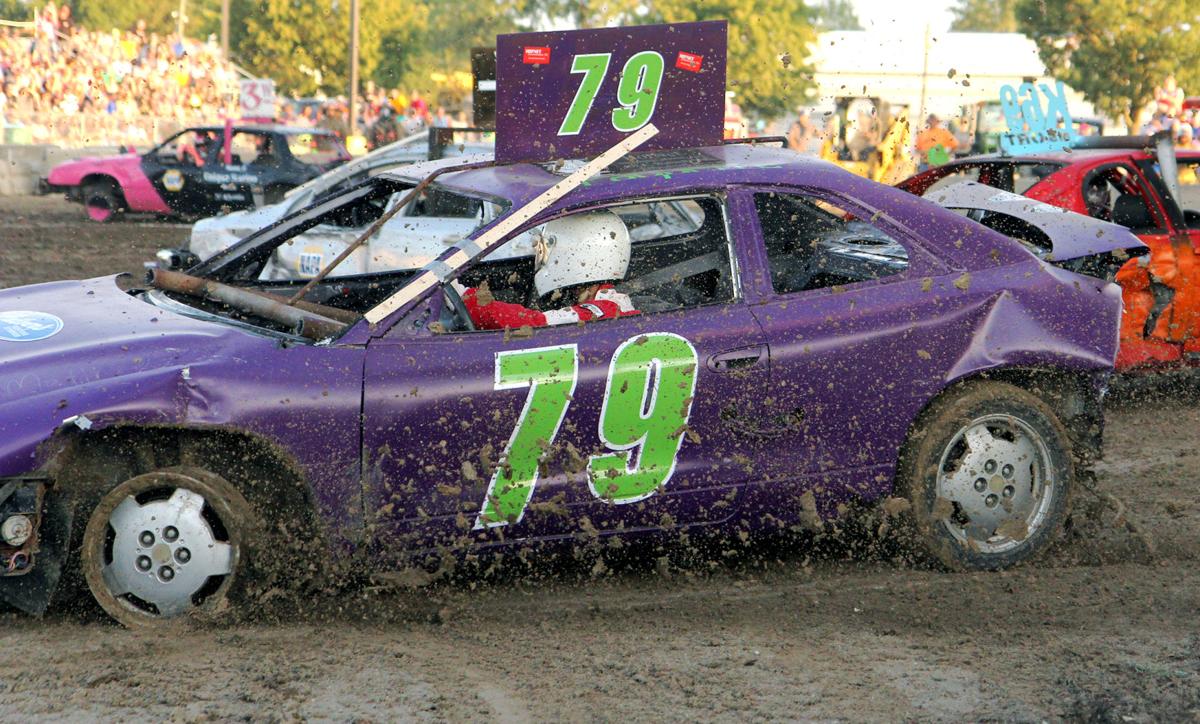 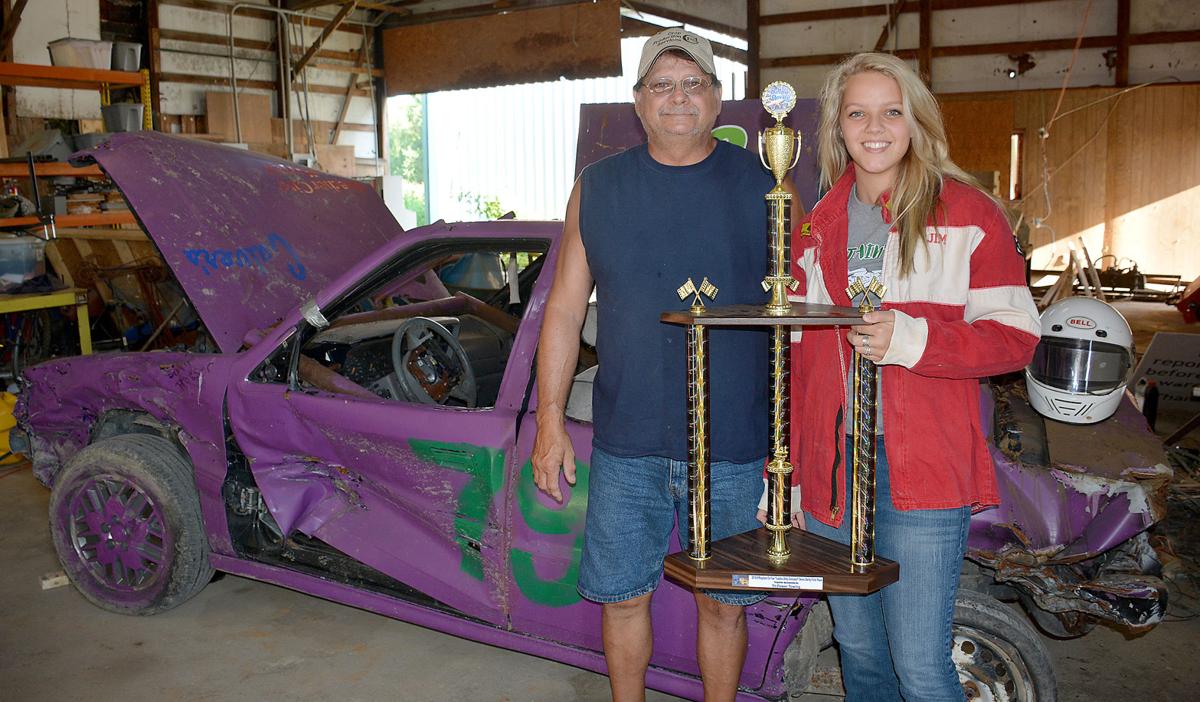 As a demolition derby driver, Hannah Paquette of Effingham isn't afraid of anything. It's the thought of getting up on a stage in front of a large crowd she finds a bit intimidating.

Paquette, 20, is facing her stagefright head on this year as a candidate for Effingham County Fair Queen. She's also competing in the Demolition Derby, as she has for the past two years.

"I always wanted to do the derby. As soon as I got my license, I wanted to derby, but my mom didn't let me until I was 18," Paquette said. "I always thought it would be cool to do the pageant, but I was always scared to be up on stage in front of everybody. Serena really talked me into it and said that it's a lot of fun, and it helps a lot with interviewing skills for future jobs, so I decided to give it a try."

Paquette said Strullmyer coached her on things like a proper pageant walk. Strullmyer said she helps each of the pageant contestants at the practices, and Paquette's walk has definitely improved.

What's the bigger challenge – the Demolition Derby or the pageant? Paquette was quick to answer.

"Easily the pageant, because I've never been the 'girly girl' type, and this is definitely something out of my comfort zone. This is my time to try new things and see how it works out," Paquette said.

Strullmyer said she was in charge of recruiting contestants for the 2019 pageant. She described Paquette's inquiry about the pageant as the "best day ever."

Along with helping her to perfect her walk, Strullmyer said that in practices, she has coached Paquette on her speech, but Paquette did well practing interviewing skills and did not need much help with that.

Strullmyer said that having experience competing in the derby will give Paquette a unique talking point with the judges.

"I think she has the potential to do well. This is going to be a really good year because there's only two returning girls out of the 11. The rest of them, it's all their first year, so it will be more of an even playing field,” Strullmyer said.

"The judges do like seeing girls who are involved in the fair. I think it will be something interesting the judges are definitely going to talk to her about because it's not a typical thing to see. Most pageant girls don't do the derby as well, so I think it will be a good conversation starter in her speech."

While she seeks the crown on stage, Paquette will be seeking a second consecutive crown in the derby. Paquette won the all-girls heat last year, climbing up two spots from her third-place finish in 2017.

With a few derby runs under her belt, Paquette said this year was the ideal time to also go out for the pageant.

"I decided this year would be a good year to do the pageant because I'm using my same derby car as last year, so I don't have to prepare my derby car like I would have to if it was a brand new car," Paquette said.

Paquette obtained her first derby car three years ago, and with the help of two friends, she transformed it into a purple and green demolition derby vehicle. Paquette helped to tear out the car's interior and windows and paint it while her friends welded the doors shut and moved the gas tank.

Paquette's car also sports the number 79 in homage to the days when her grandfather, Jim Kline, was a stock car racer.

"It has that sentimental thing for him," Paquette said of the racing number. "My grandpa (is) a big person in my life, so I kind of did it for him to make that number special for both of us."

Kline said 1979 was the year he and his wife were married. Sharing that race number with his granddaughter is special to him, Kline said.

"That was really nice," Kline said.

Kline said over the years, he has encouraged his granddaughter to try her hand at the pageant, so he was pleased when he learned she was doing just that. He added that he was proud to see his granddaughter take the stage and take the wheel in what he called "the best of both worlds."

Kline and his wife scooped up their tickets to the pageant early to ensure they have the best seats to see their granddaughter on stage. As he has done for the past two years, Kline said he bought a pit pass for the Demolition Derby so he can be with Paquette in the derby car preparation area.

While he is not heavily involved in the construction of Paquette's derby car, he said he occassionally helps her out and cheers her on from the stands.

"I'm just a guy that sits on the sidelines. I don't want to be in the limelight. It's all about her," Kline said. "The only thing I told her was don't get hurt. Try to be as safe as possible."

As for the pageant, Kline said he is sure his granddaughter has a "98 percent chance of winning it."

Paquette said she's taken her grandpa's advice to heart as she wears his firesuit and helmet from his racing days while she competes in the derby.

From her grandpa's racing background and her first experience watching a derby at the Effingham County Fairgrounds as a seventh grader, Paquette said she was hooked on the sport.

Paquette said the fun of participating in the demolition derby is that anyone can be a derby driver.

She has advice for girls who want to participate in the pageant, derby – or both.

"It doesn't hurt to go out and try and just have fun doing something new," Paquette said.