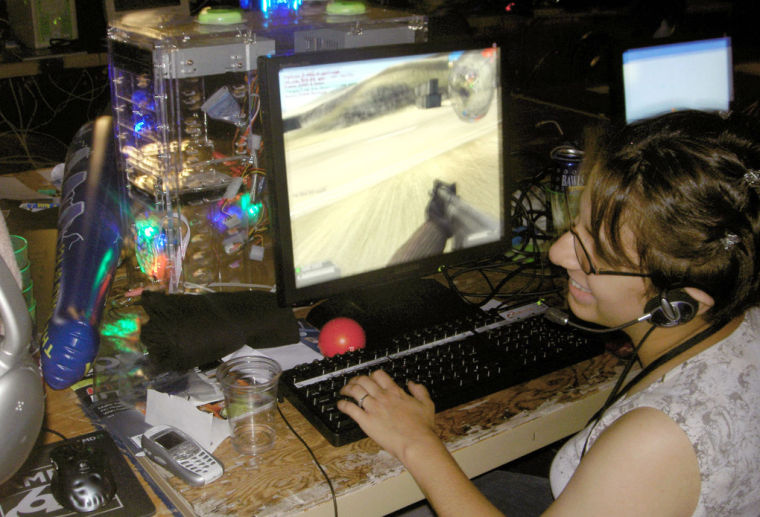 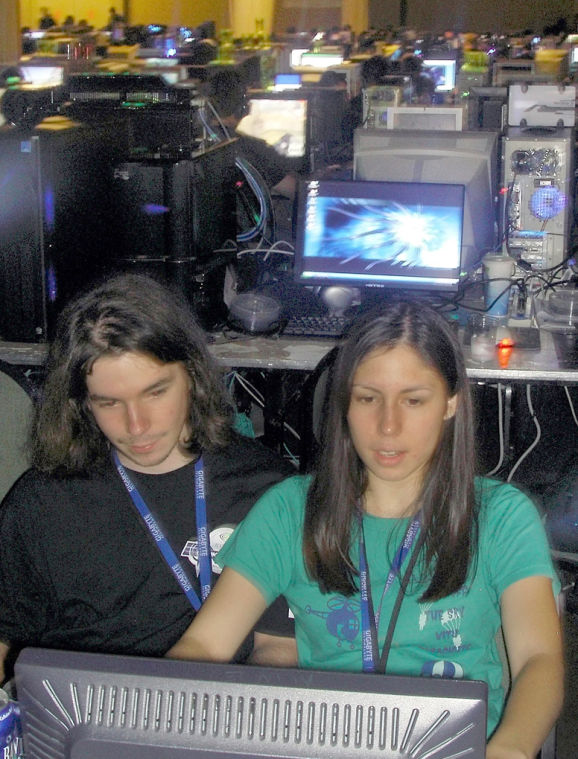 DALLAS (AP) — Like many couples, Kirsten Bjorn and John Ouimette met at a party. But they met at a LAN party, where friends bring desktop computers, connect to a local network and play PC games into the wee hours of the night. That bloomed into a romance filled with regular gaming sessions. A year later, 20-year-old Bjorn proposed to Ouimette, 23, at the ultimate LAN party, QuakeCon, to cheers from the mostly male crowd. ‘‘Doing it at QuakeCon was more our thing than doing it over a fancy dinner,’’ she said. QuakeCon may seem an unlikely place for love, with its rows of unshowered gamers who interact more with their computers than actual people. But the gaming scene has been bringing together couples through interactive chat rooms and conferences like this one, where gamers face off against strangers beside them who might just be of the female persuasion. ——— OF LOVE AND DEODORANT Emptied bottles of the highly caffeinated energy drink ‘‘Bawls’’ are scattered along the rows of computers to help hard-core gamers stay awake for much of the 96-hour conference, but many still fall asleep on their computers, with screen savers that say ‘‘Wake me up at 11 a.m.’’ Gamers were strongly advised to ‘‘bring deodorant’’ and ‘‘shower before leaving and after arriving’’ -- a warning that comes in response to the history of odors coming from the BYOC (bring your own computer) area. If that doesn’t seem like the most promising place to cruise for a date, Elizabeth Wilson would disagree. The 19-year-old from Pensacola, Fla., came with only her laptop and couldn’t play games. But she did talk to a man on DC++, a file-sharing program with a chat engine built in, and ended up spending the rest of the weekend ‘‘under the table’’ with him. ‘‘I’ve had that in all my relationships where I met them online and then in person,’’ Wilson said. ‘‘It is kinda weird but at QuakeCon it was less strange -- it wasn’t like them coming all the way to visit you.’’ This year, Sarah Morott noticed an increase in female gamers, but complained that the conference is still largely dominated by men, who made up 80 percent of about 1,800 gamers who came to Dallas for QuakeCon, according to Marty Stratton, spokesman for id Software. Women in skimpy ‘‘QuakeCon’’ tank tops roam the aisles and act as emcees. ‘‘Almost all the chicks are hired to be here,’’ Morott said. ‘‘It’s a complete sausage fest.’’ Facing a room full of thousands of lonely, adolescent men can be difficult for a teenage girl. Jennifer Horton, 15, came to her third QuakeCon with her dad and brother, but still was hit on by several men. ‘‘They’re either too old or just kind of creepy,’’ Horton said. ——— VIOLENCE IS SO ROMANTIC A few rows away from Horton, a couple quietly played a shooting game called Battlefield 2. Ben Fogt said one of the sweetest things his girlfriend Kristin Kirally does is follow him around when she’s playing a medic on the game to save him if he gets hurt. ‘‘We work as a team -- we avenge each other’s deaths,’’ he said. Gaming has also fueled the romance of Morott, 23, and her boyfriend Chris Means. He got her involved in gaming when they started dating in high school, and the couple have used videogame stills for Valentine’s Day cards and sent each other love notes mid-game. Morott says one of the most romantic things Means, 24, ever did for her was buy a framed printout from Diablo II. Gaming even helped the couple stay in touch when Means went to college while Morott was still in high school. Bjorn and Ouimette, both college students at Texas Christian University in Fort Worth, spend about an hour a day playing games like Half-Life or Quake 4. Both will be heading to the Army in upcoming months, and when they’re not in their ROTC dorm rooms, they’re playing in their apartment -- with her computer in the bedroom and his in the living room. ‘‘We can’t look at each other’s screens,’’ she explains, ‘‘that’s cheating!’’ Many of the games they play involve ‘‘fragging’’ -- or killing. Bjorn quips: ‘‘The family that frags together stays together.’’